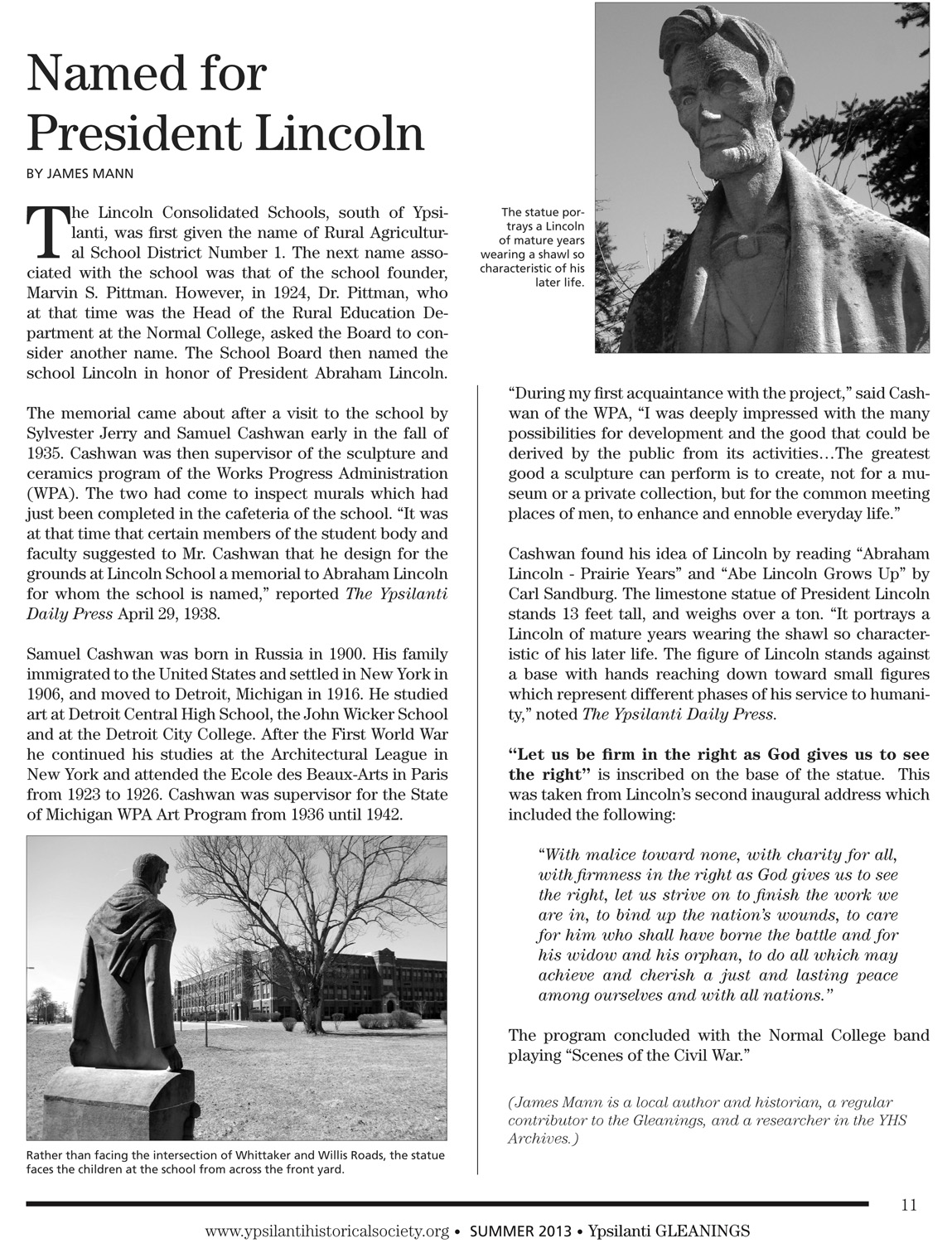 The Lincoln Consolidated Schools, south of Ypsilanti, was first given the name of Rural Agricultural School District Number 1. The next name associated with the school was that of the school founder, Marvin S. Pittman. However, in 1924, Dr. Pittman, who at that time was the Head of the Rural Education Department at the Normal College, asked the Board to consider another name. The School Board then named the school Lincoln in honor of President Abraham Lincoln. The memorial came about after a visit to the school by Sylvester Jerry and Samuel Cashwan early in the fall of 1935. Cashwan was then supervisor of the sculpture and ceramics program of the Works Progress Administration (WPA). The two had come to inspect murals which had just been completed in the cafeteria of the school. “It was at that time that certain members of the student body and faculty suggested to Mr. Cashwan that he design for the grounds at Lincoln School a memorial to Abraham Lincoln for whom the school is named,” reported The Ypsilanti Daily Press April 29, 1938. Samuel Cashwan was born in Russia in 1900. His family immigrated to the United States and settled in New York in 1906, and moved to Detroit, Michigan in 1916. He studied art at Detroit Central High School, the John Wicker School and at the Detroit City College. After the First World War he continued his studies at the Architectural League in New York and attended the École des Beaux-Arts in Paris from 1923 to 1926. Cashwan was supervisor for the State of Michigan WPA Art Program from 1936 until 1942. “During my first acquaintance with the project,” said Cashwan of the WPA, “I was deeply impressed with the many possibilities for development and the good that could be derived by the public from its activities…The greatest good a sculpture can perform is to create, not for a museum or a private collection, but for the common meeting places of men, to enhance and ennoble everyday life.” Cashwan found his idea of Lincoln by reading “Abraham Lincoln - Prairie Years” and “Abe Lincoln Grows Up” by Carl Sandburg. The limestone statue of President Lincoln stands 13 feet tall, and weighs over a ton. “It portrays a Lincoln of mature years wearing the shawl so characteristic of his latter life. The figure of Lincoln stands against a base with hands reaching down toward small figures which represent different phases of his service to humanity,” noted The Ypsilanti Daily Press. “Let us be firm in the right as God gives us to see the right” is inscribed on the base of the statue. This was taken from Lincoln’s second inaugural address which included the following: “With malice toward none, with charity for all, with firmness in the right as God gives us to see the right, let us strive on to finish the work we are in, to bind up the nation’s wounds, to care for him who shall have borne the battle and for his widow and his orphan, to do all which may achieve and cherish a just and lasting peace among ourselves and with all nations.” The program concluded with the Normal College band playing “Scenes of the Civil War.” (James Mann is a local author and historian, a regular contributor to the Gleanings, and a researcher in the YHS Archives.)

Photo Captions:
1. Rather than facing the intersection of Whittaker and Willis Roads, the statue faces the children at the school from across the front yard.

2. The statue portrays a Lincoln of mature years wearing a shawl so characteristic of his later life.