The Washtenaw County Clash of 1930 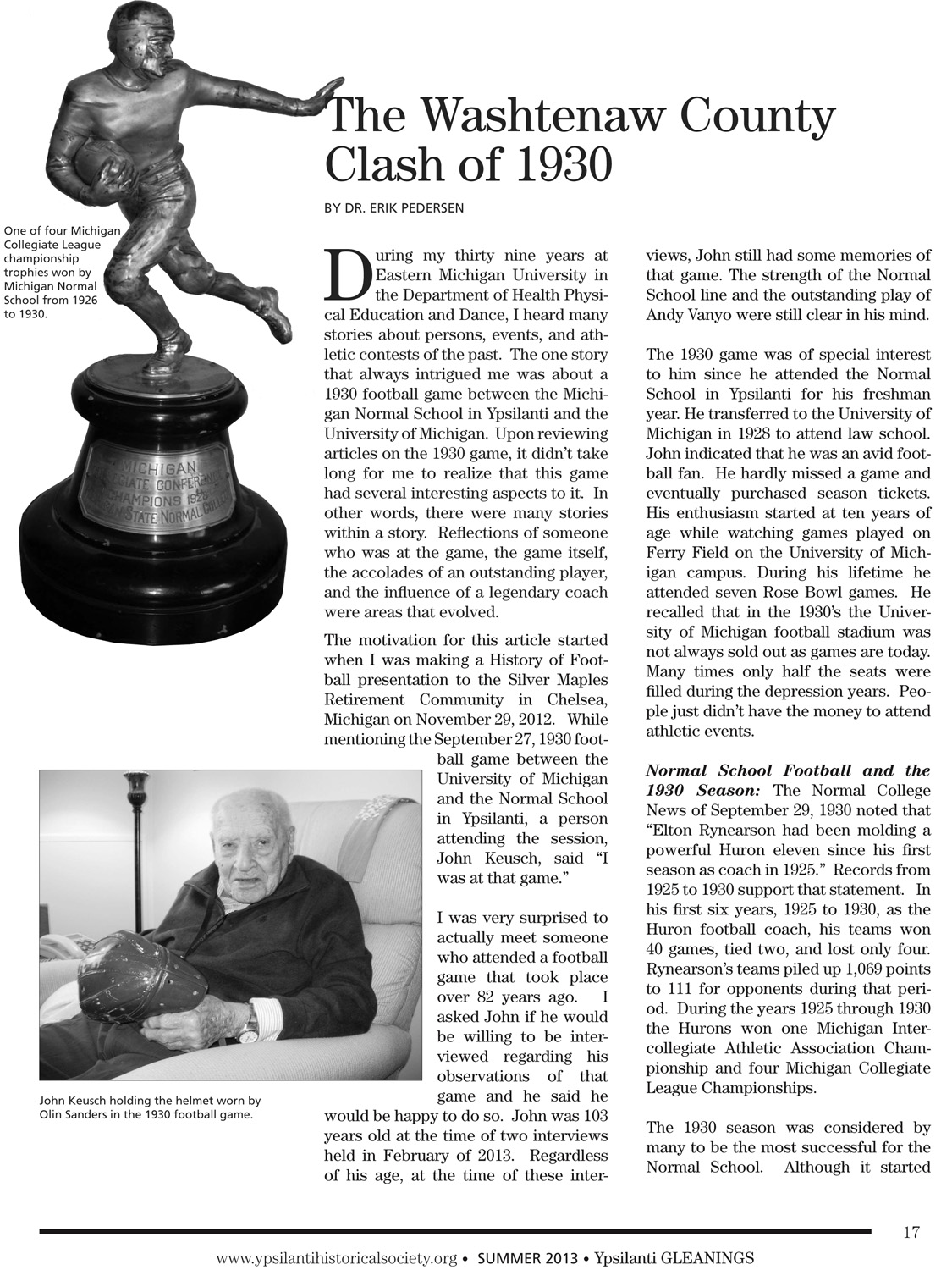 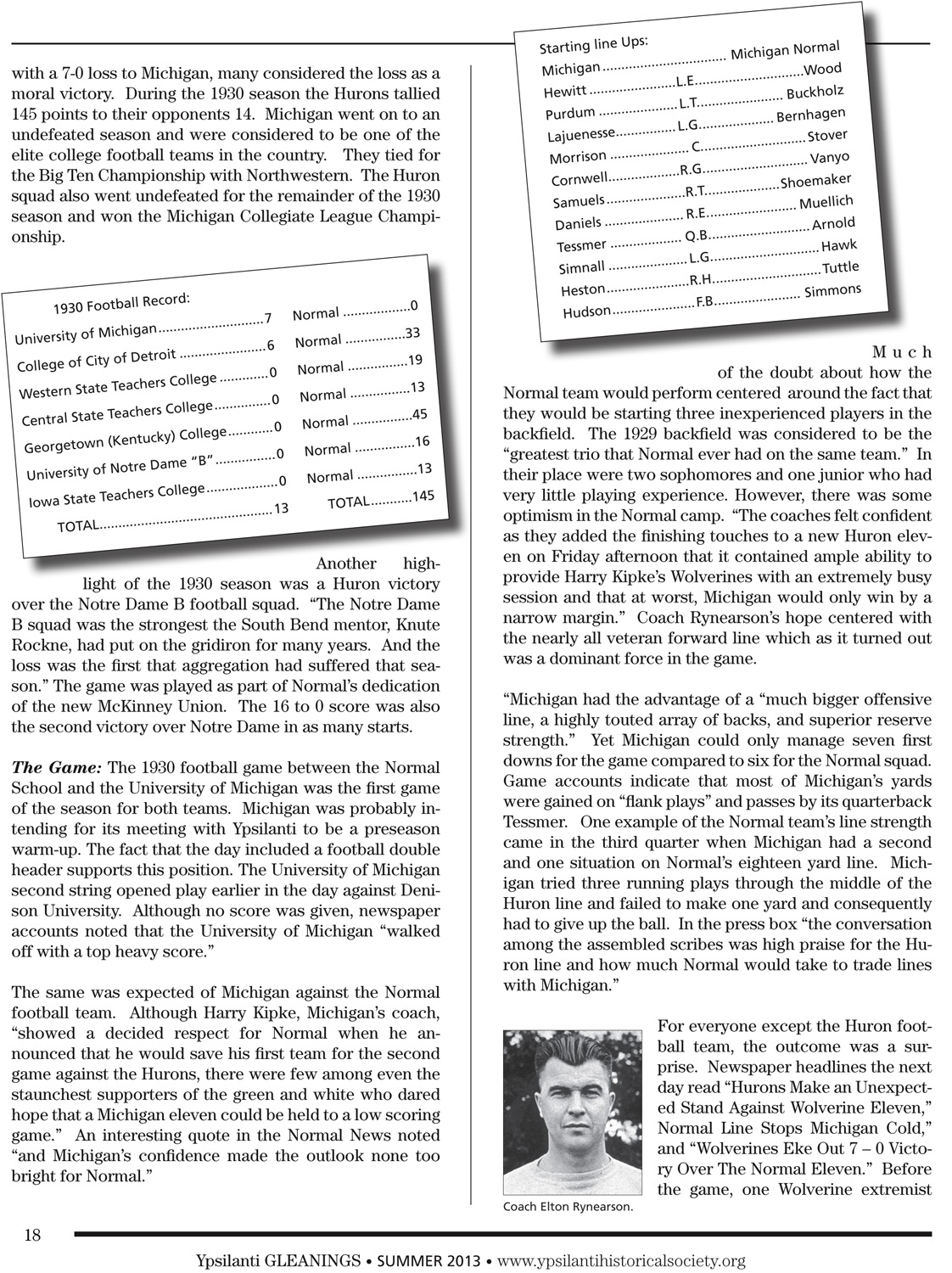 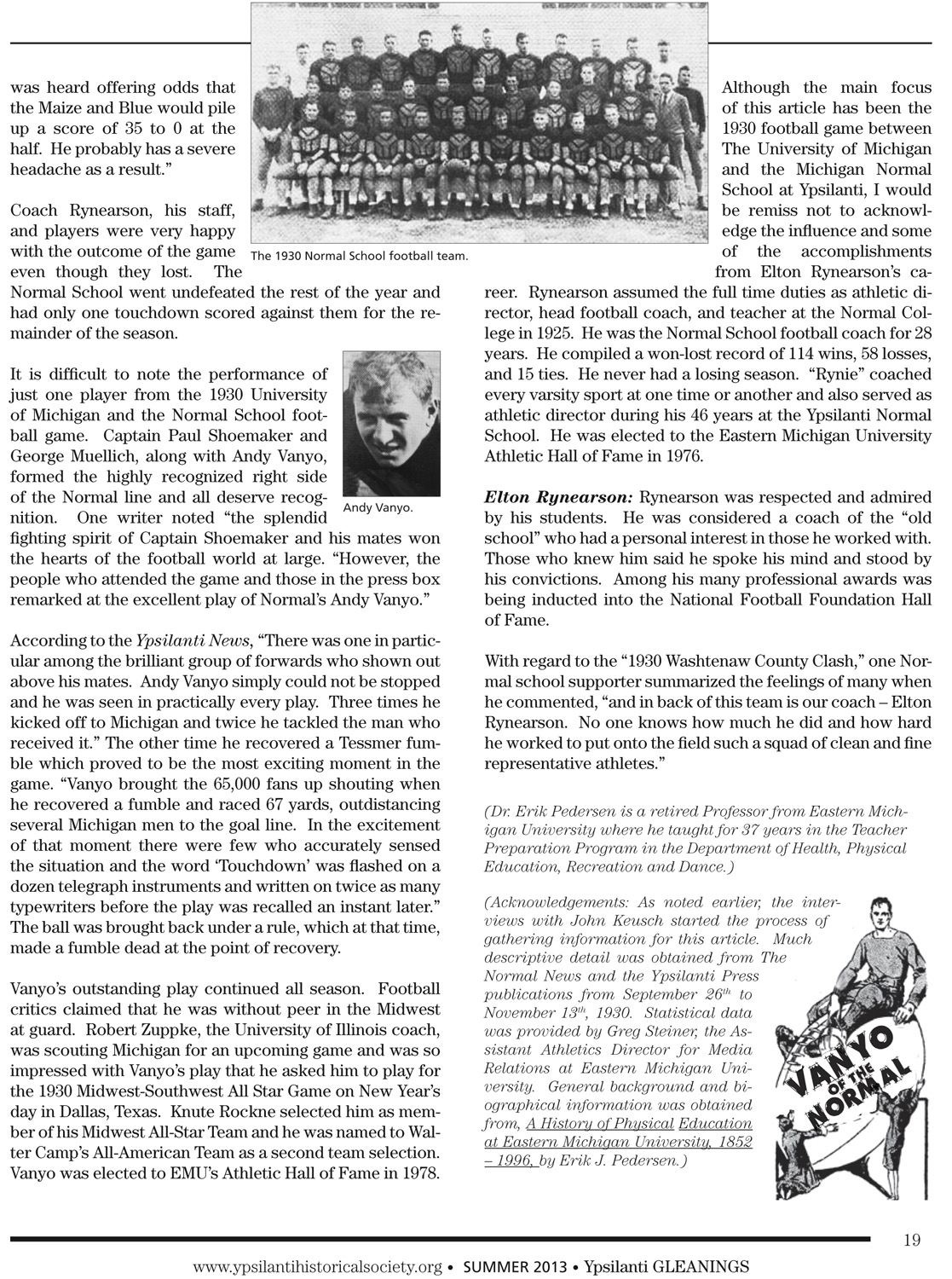 During my thirty nine years at Eastern Michigan University in the Department of Health Physical Education and Dance, I heard many stories about persons, events, and athletic contests of the past. The one story that always intrigued me was about a 1930 football game between the Michigan Normal School in Ypsilanti and the University of Michigan. Upon reviewing articles on the 1930 game, it didn’t take long for me to realize that this game had several interesting aspects to it. In other words, there were many stories within a story. Reflections of someone who was at the game, the game itself, the accolades of an outstanding player, and the influence of a legendary coach were areas that evolved. The motivation for this article started when I was making a History of Football presentation to the Silver Maples Retirement Community in Chelsea, Michigan on November 29, 2012. While mentioning the September 27, 1930 football game between the University of Michigan and the Normal School in Ypsilanti, a person attending the session, John Keusch, said “I was at that game.” I was very surprised to actually meet someone who attended a football game that took place over 82 years ago. I asked John if he would be willing to be interviewed regarding his observations of that game and he said he would be happy to do so. John was 103 years old at the time of two interviews held in February of 2013. Regardless of his age, at the time of these interviews, John still had some memories of that game. The strength of the Normal School line and the outstanding play of Andy Vanyo were still clear in his mind. The 1930 game was of special interest to him since he attended the Normal School in Ypsilanti for his freshman year. He transferred to the University of Michigan in 1928 to attend law school. John indicated that he was an avid football fan. He hardly missed a game and eventually purchased season tickets. His enthusiasm started at ten years of age while watching games played on Ferry Field on the University of Michigan campus. During his lifetime he attended seven Rose Bowl games. He recalled that in the 1930’s the University of Michigan football stadium was not always sold out as games are today. Many times only half the seats were filled during the depression years. People just didn’t have the money to attend athletic events. Normal School Football and the 1930 Season: The Normal College News of September 29, 1930 noted that “Elton Rynearson had been molding a powerful Huron eleven since his first season as coach in 1925.” Records from 1925 to 1930 support that statement. In his first six years, 1925 to 1930, as the Huron football coach, his teams won 40 games, tied two, and lost only four. Rynearson’s teams piled up 1,069 points to 111 for opponents during that period. During the years 1925 through 1930 the Hurons won one Michigan Intercollegiate Athletic Association Championship and four Michigan Collegiate League Championships. The 1930 season was considered by many to be the most successful for the Normal School. Although it started with a 7-0 loss to Michigan, many considered the loss as a moral victory. During the 1930 season the Hurons tallied 145 points to their opponents 14. Michigan went on to an undefeated season and were considered to be one of the elite college football teams in the country. They tied for the Big Ten Championship with Northwestern. The Huron squad also went undefeated for the remainder of the 1930 season and won the Michigan Collegiate League Championship.

Another highlight of the 1930 season was a Huron victory over the Notre Dame B football squad. “The Notre Dame B squad was the strongest the South Bend mentor, Knute Rockne, had put on the gridiron for many years. And the loss was the first that aggregation had suffered that season.” The game was played as part of Normal’s dedication of the new McKinney Union. The 16 to 0 score was also the second victory over Notre Dame in as many starts. The Game: The 1930 football game between the Normal School and the University of Michigan was the first game of the season for both teams. Michigan was probably intending for its meeting with Ypsilanti to be a preseason warm-up. The fact that the day included a football double header supports this position. The University of Michigan second string opened play earlier in the day against Denison University. Although no score was given, newspaper accounts noted that the University of Michigan “walked off with a top heavy score.” The same was expected of Michigan against the Normal football team. Although Harry Kipke, Michigan’s coach, “showed a decided respect for Normal when he announced that he would save his first team for the second game against the Hurons, there were few among even the staunchest supporters of the green and white who dared hope that a Michigan eleven could be held to a low scoring game.” An interesting quote in the Normal News noted “and Michigan’s confidence made the outlook none too bright for Normal.”

2. John Keusch holding the helmet worn by Olin Sanders in the 1930 football game.