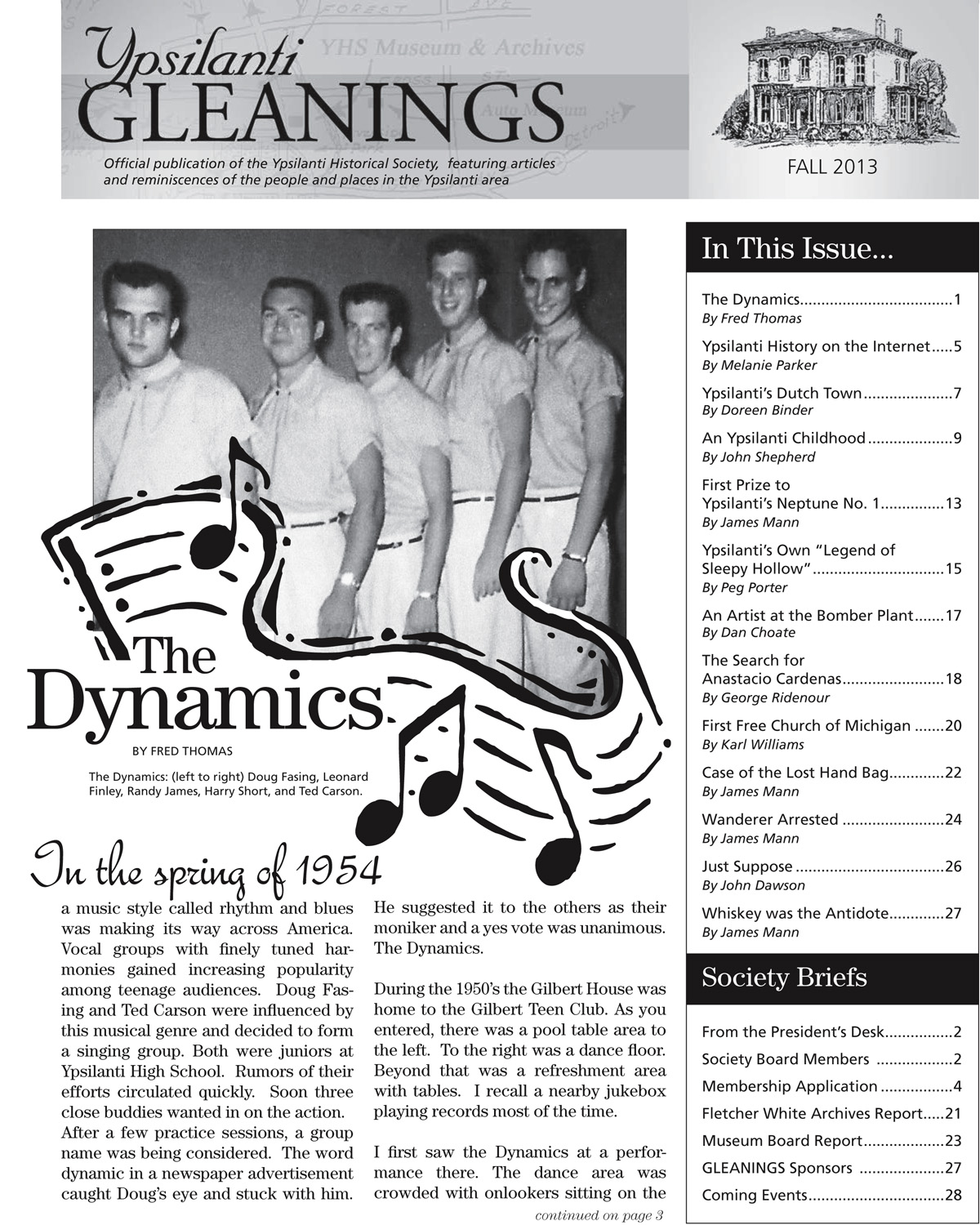 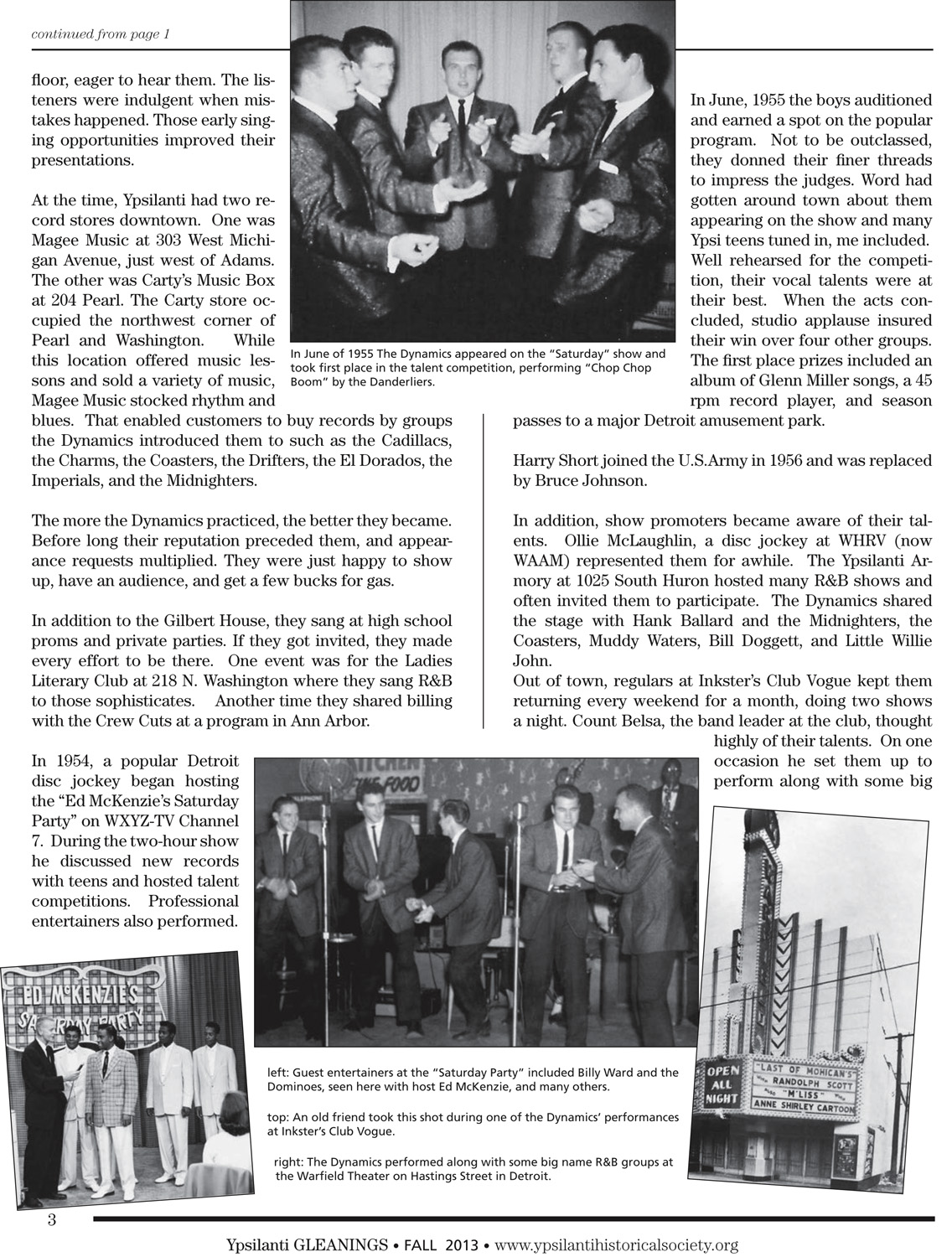 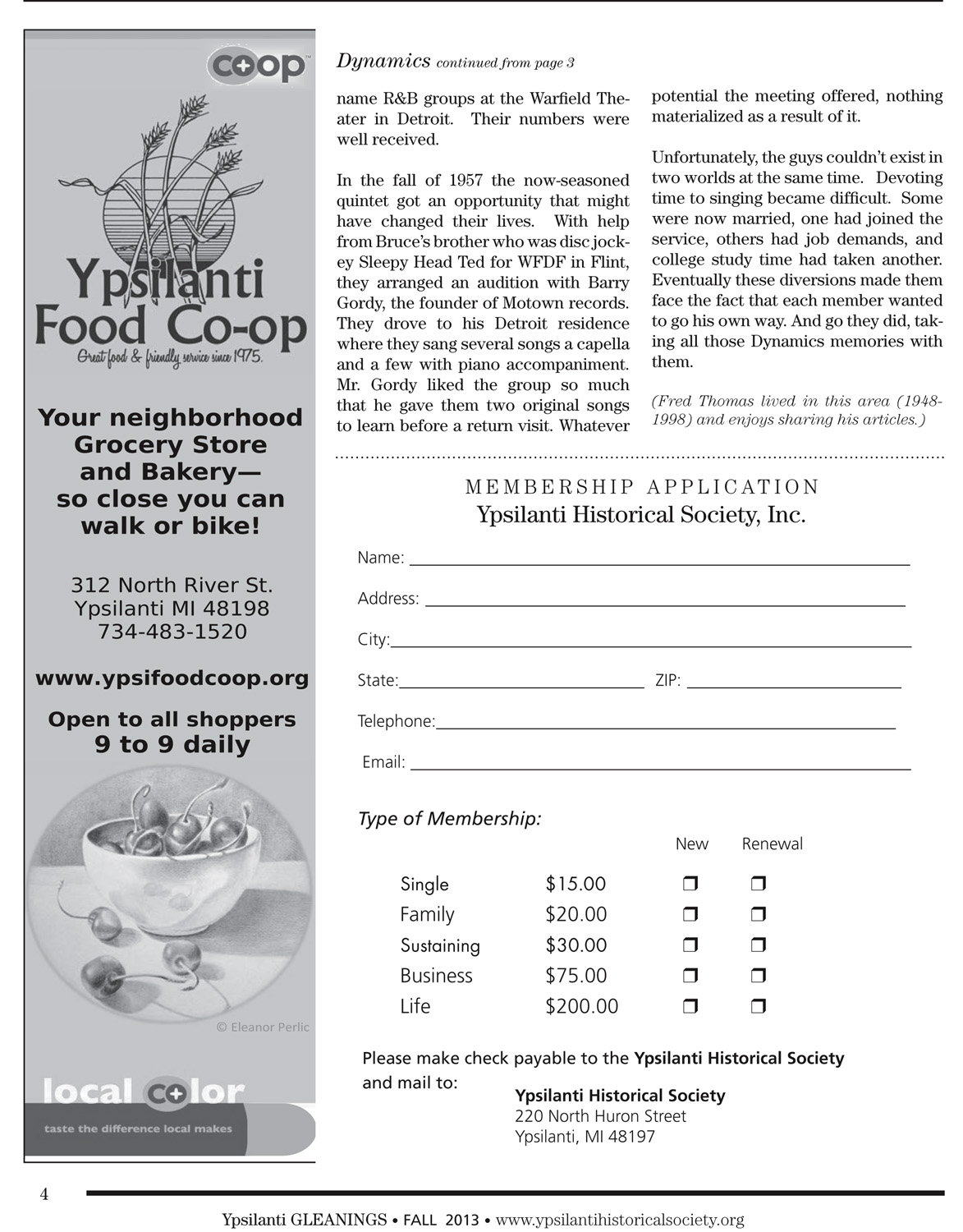 In the spring of 1954 a music style called rhythm and blues was making its way across America. Vocal groups with finely tuned harmonies gained increasing popularity among teenage audiences. Doug Fasing and Ted Carson were influenced by this musical genre and decided to form a singing group. Both were juniors at Ypsilanti High School. Rumors of their efforts circulated quickly. Soon three close buddies wanted in on the action. After a few practice sessions, a group name was being considered. The word dynamic in a newspaper advertisement caught Doug’s eye and stuck with him. He suggested it to the others as their moniker and a yes vote was unanimous. The Dynamics. During the 1950’s the Gilbert House was home to the Gilbert Teen Club. As you entered, there was a pool table area to the left. To the right was a dance floor. Beyond that was a refreshment area with tables. I recall a nearby jukebox playing records most of the time. I first saw the Dynamics at a performance there. The dance area was crowded with onlookers sitting on the floor, eager to hear them. The listeners were indulgent when mistakes happened. Those early singing opportunities improved their presentations. At the time, Ypsilanti had two record stores downtown. One was Magee Music at 303 West Michigan Avenue, just west of Adams. The other was Carty’s Music Box at 204 Pearl. The Carty store occupied the northwest corner of Pearl and Washington. While this location offered music lessons and sold a variety of music, Magee Music stocked rhythm and blues. That enabled customers to buy records by groups the Dynamics introduced them to such as the Cadillacs, the Charms, the Coasters, the Drifters, the El Dorados, the Imperials, and the Midnighters. The more the Dynamics practiced, the better they became. Before long their reputation preceded them, and appearance requests multiplied. They were just happy to show up, have an audience, and get a few bucks for gas. In addition to the Gilbert House, they sang at high school proms and private parties. If they got invited, they made every effort to be there. One event was for the Ladies Literary Club at 218 N. Washington where they sang R&B to those sophisticates. Another time they shared billing with the Crew Cuts at a program in Ann Arbor. In 1954, a popular Detroit disc jockey began hosting the “Ed McKenzie’s Saturday Party” on WXYZ-TV Channel 7. During the two-hour show he discussed new records with teens and hosted talent competitions. Professional entertainers also performed. In June, 1955 the boys auditioned and earned a spot on the popular program. Not to be outclassed, they donned their finer threads to impress the judges. Word had gotten around town about them appearing on the show and many Ypsi teens tuned in, me included. Well rehearsed for the competition, their vocal talents were at their best. When the acts concluded, studio applause insured their win over four other groups. The first place prizes included an album of Glenn Miller songs, a 45 rpm record player, and season passes to a major Detroit amusement park. Harry Short joined the U.S.Army in 1956 and was replaced by Bruce Johnson. In addition, show promoters became aware of their talents. Ollie McLaughlin, a disc jockey at WHRV (now WAAM) represented them for awhile. The Ypsilanti Armory at 1025 South Huron hosted many R&B shows and often invited them to participate. The Dynamics shared the stage with Hank Ballard and the Midnighters, the Coasters, Muddy Waters, Bill Doggett, and Little Willie John. Out of town, regulars at Inkster’s Club Vogue kept them returning every weekend for a month, doing two shows a night. Count Belsa, the band leader at the club, thought highly of their talents. On one occasion he set them up to perform along with some big name R&B groups at the Warfield Theater in Detroit. Their numbers were well received. In the fall of 1957 the now-seasoned quintet got an opportunity that might have changed their lives. With help from Bruce’s brother who was disc jockey Sleepy Head Ted for WFDF in Flint, they arranged an audition with Barry Gordy, the founder of Motown records. They drove to his Detroit residence where they sang several songs a capella and a few with piano accompaniment. Mr. Gordy liked the group so much that he gave them two original songs to learn before a return visit. Whatever potential the meeting offered, nothing materialized as a result of it. Unfortunately, the guys couldn’t exist in two worlds at the same time. Devoting time to singing became difficult. Some were now married, one had joined the service, others had job demands, and college study time had taken another. Eventually these diversions made them face the fact that each member wanted to go his own way. And go they did, taking all those Dynamics memories with them. (Fred Thomas lived in this area (1948-1998) and enjoys sharing his articles.)

2. Guest entertainers at the “Saturday Party” included Billy Ward and the Dominoes, seen here with host Ed McKenzie, and many others.

3. In June of 1955 The Dynamics appeared on the “Saturday” show and took first place in the talent competition, performing “Chop Chop Boom” by the Danderliers.

4. An old friend took this shot during one of the Dynamics’ performances at Inkster’s Club Vogue.

5. The Dynamics performed along with some big name R&B groups at the Warfield Theater on Hastings Street in Detroit.