First Prize To Ypsilanti's Neptune No. 1 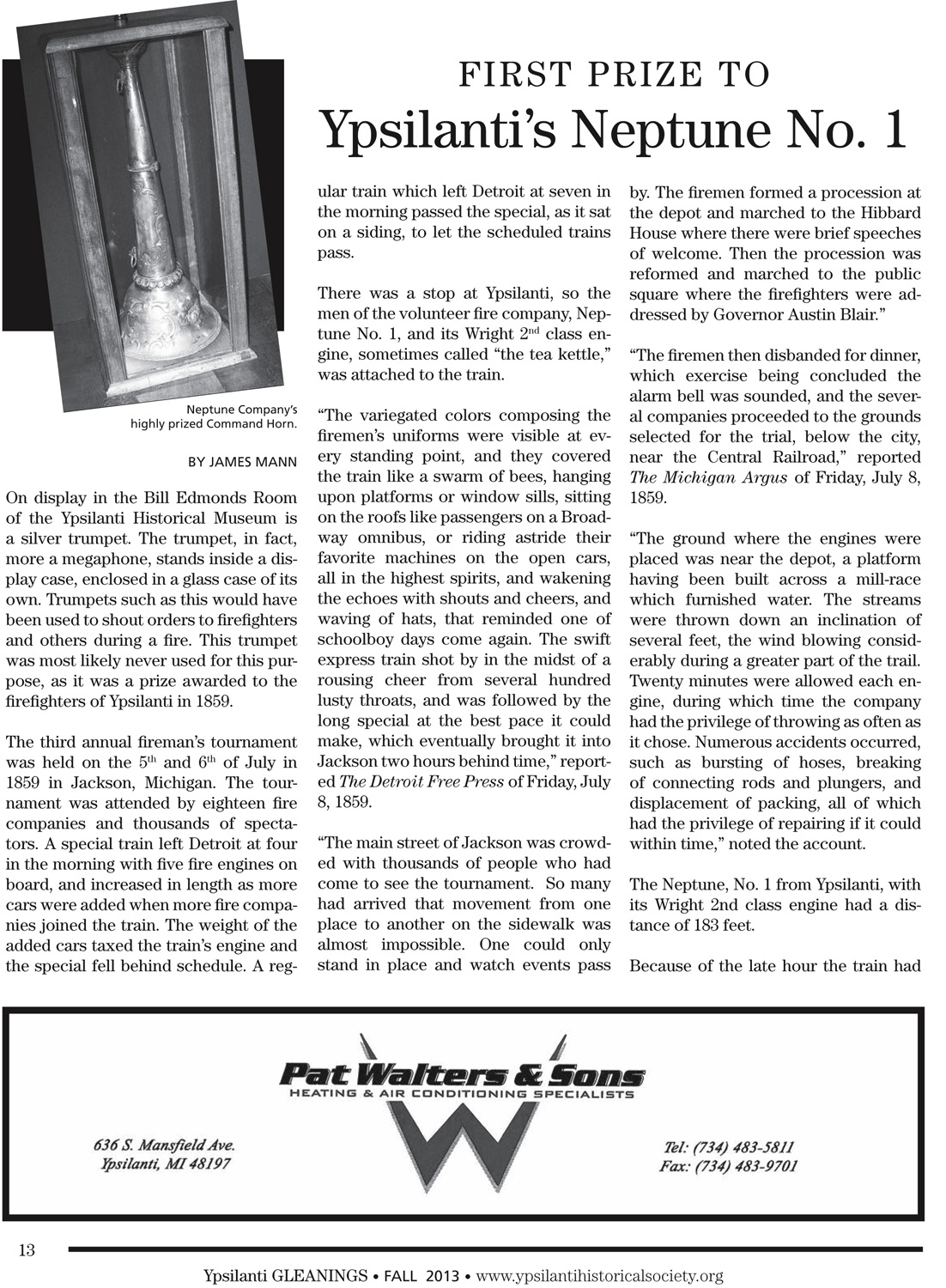 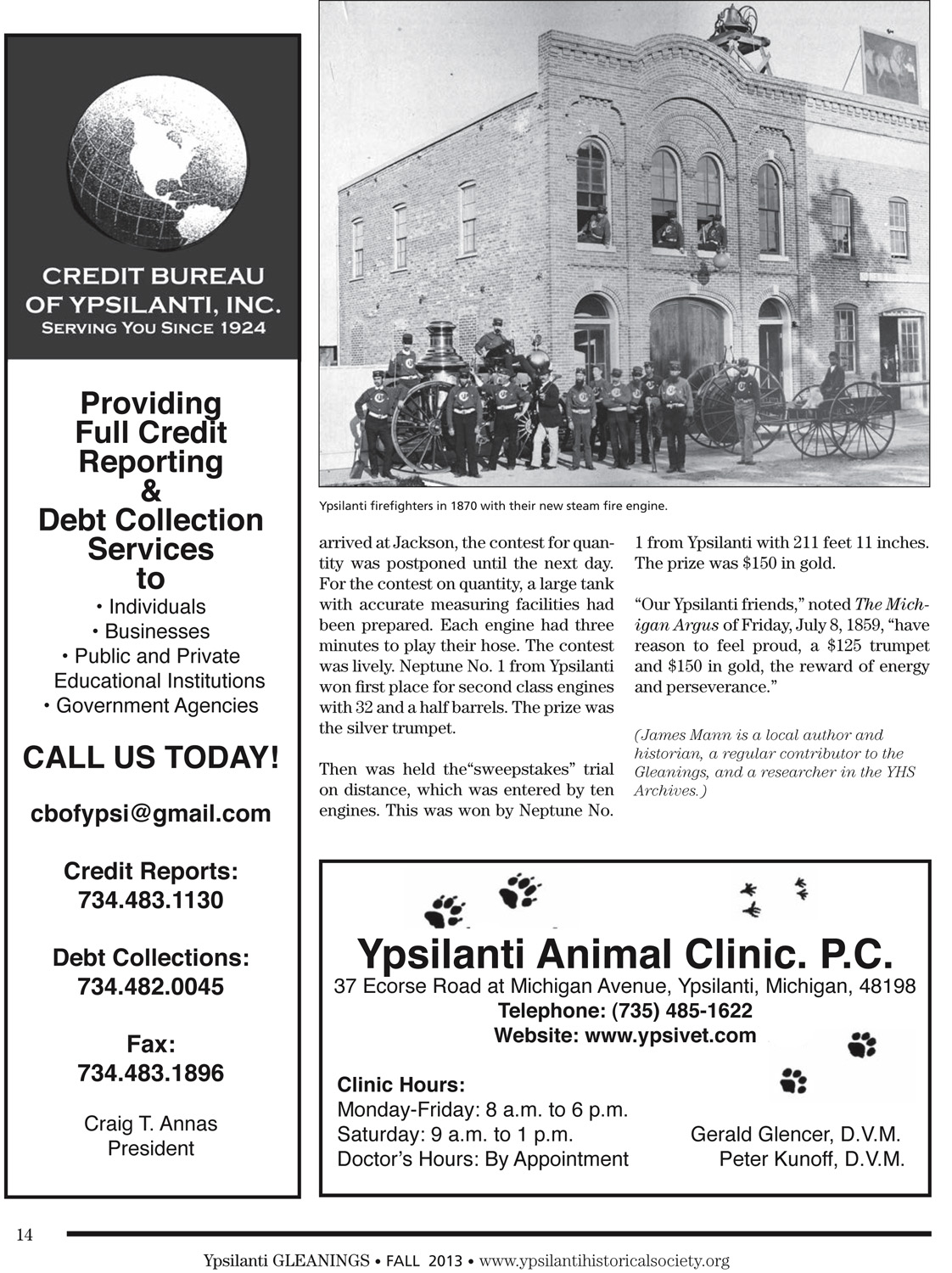 On display in the Bill Edmonds Room of the Ypsilanti Historical Museum is a silver trumpet. The trumpet, in fact, more a megaphone, stands inside a display case, enclosed in a glass case of its own. Trumpets such as this would have been used to shout orders to firefighters and others during a fire. This trumpet was most likely never used for this purpose, as it was a prize awarded to the firefighters of Ypsilanti in 1859. The third annual fireman’s tournament was held on the 5th and 6th of July in 1859 in Jackson, Michigan. The tournament was attended by eighteen fire companies and thousands of spectators. A special train left Detroit at four in the morning with five fire engines on board, and increased in length as more cars were added when more fire companies joined the train. The weight of the added cars taxed the train’s engine and the special fell behind schedule. A regular train which left Detroit at seven in the morning passed the special, as it sat on a siding, to let the scheduled trains pass. There was a stop at Ypsilanti, so the men of the volunteer fire company, Neptune No. 1, and its Wright 2nd class engine, sometimes called “the tea kettle,” was attached to the train. “The variegated colors composing the firemen’s uniforms were visible at every standing point, and they covered the train like a swarm of bees, hanging upon platforms or window sills, sitting on the roofs like passengers on a Broadway omnibus, or riding astride their favorite machines on the open cars, all in the highest spirits, and wakening the echoes with shouts and cheers, and waving of hats, that reminded one of schoolboy days come again. The swift express train shot by in the midst of a rousing cheer from several hundred lusty throats, and was followed by the long special at the best pace it could make, which eventually brought it into Jackson two hours behind time,” reported The Detroit Free Press of Friday, July 8, 1859. “The main street of Jackson was crowded with thousands of people who had come to see the tournament. So many had arrived that movement from one place to another on the sidewalk was almost impossible. One could only stand in place and watch events pass by. The firemen formed a procession at the depot and marched to the Hibbard House where there were brief speeches of welcome. Then the procession was reformed and marched to the public square where the firefighters were addressed by Governor Austin Blair.” “The firemen then disbanded for dinner, which exercise being concluded the alarm bell was sounded, and the several companies proceeded to the grounds selected for the trial, below the city, near the Central Railroad,” reported The Michigan Argus of Friday, July 8, 1859. “The ground where the engines were placed was near the depot, a platform having been built across a mill-race which furnished water. The streams were thrown down an inclination of several feet, the wind blowing considerably during a greater part of the trail. Twenty minutes were allowed each engine, during which time the company had the privilege of throwing as often as it chose. Numerous accidents occurred, such as bursting of hoses, breaking of connecting rods and plungers, and displacement of packing, all of which had the privilege of repairing if it could within time,” noted the account. The Neptune, No. 1 from Ypsilanti, with its Wright 2nd class engine had a distance of 183 feet. Because of the late hour the train had arrived at Jackson, the contest for quantity was postponed until the next day. For the contest on quantity, a large tank with accurate measuring facilities had been prepared. Each engine had three minutes to play their hose. The contest was lively. Neptune No. 1 from Ypsilanti won first place for second class engines with 32 and a half barrels. The prize was the silver trumpet. Then was held the “sweepstakes” trail on distance, which was entered by ten engines. This was won by Neptune No. 1 from Ypsilanti with 211 feet 11 inches. The prize was $150 in gold. “Our Ypsilanti friends,” noted The Michigan Argus of Friday, July 8, 1859, “have reason to feel proud, a $125 trumpet and $150 in gold, the reward of energy and perseverance.” (James Mann is a local author and historian, a regular contributor to the Gleanings, and a researcher in the YHS Archives.)

2. Ypsilanti firefighters in 1870 with their new steam fire engine.