Ypsilanti’s Own “Legend of Sleepy Hollow" 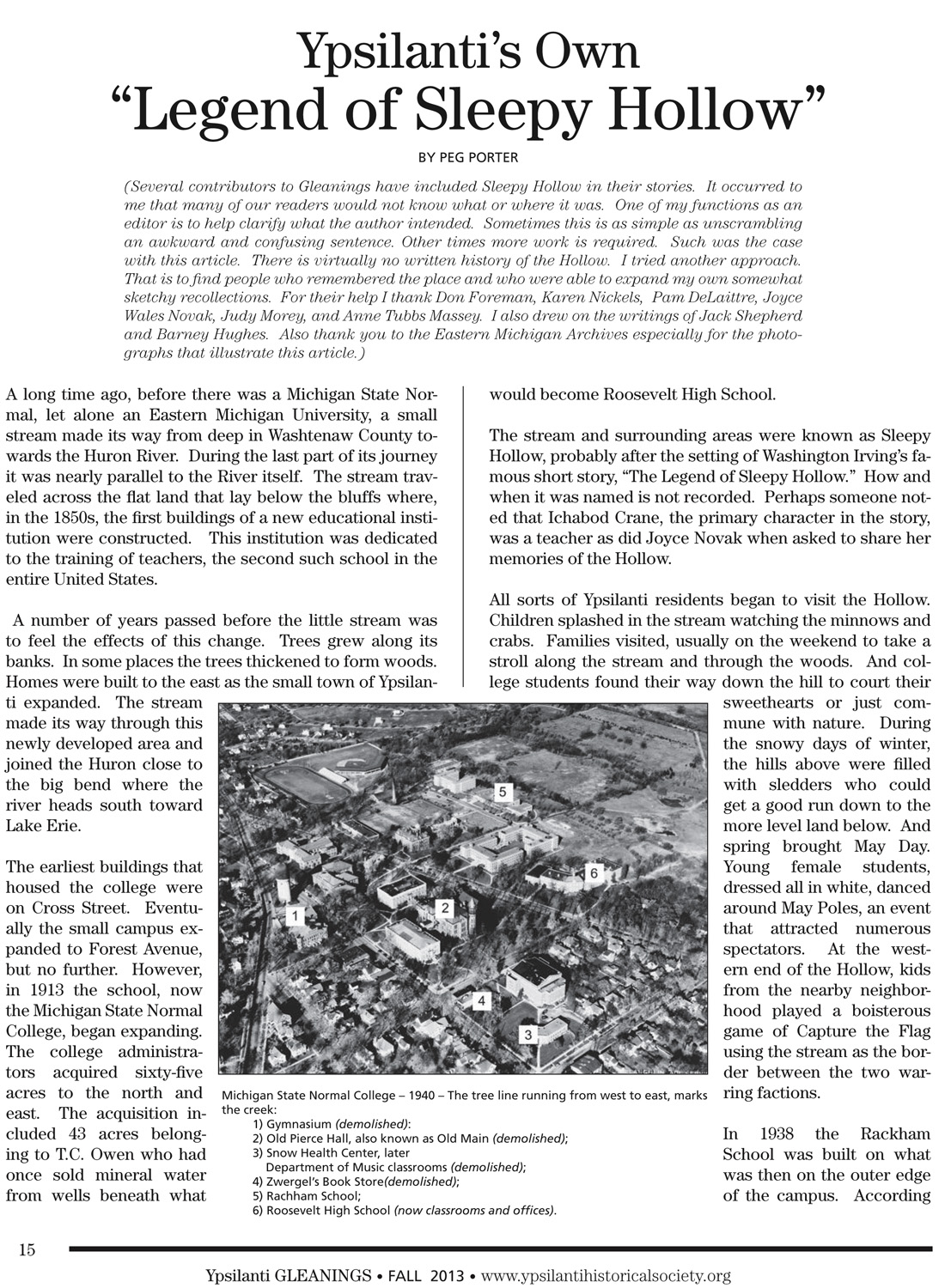 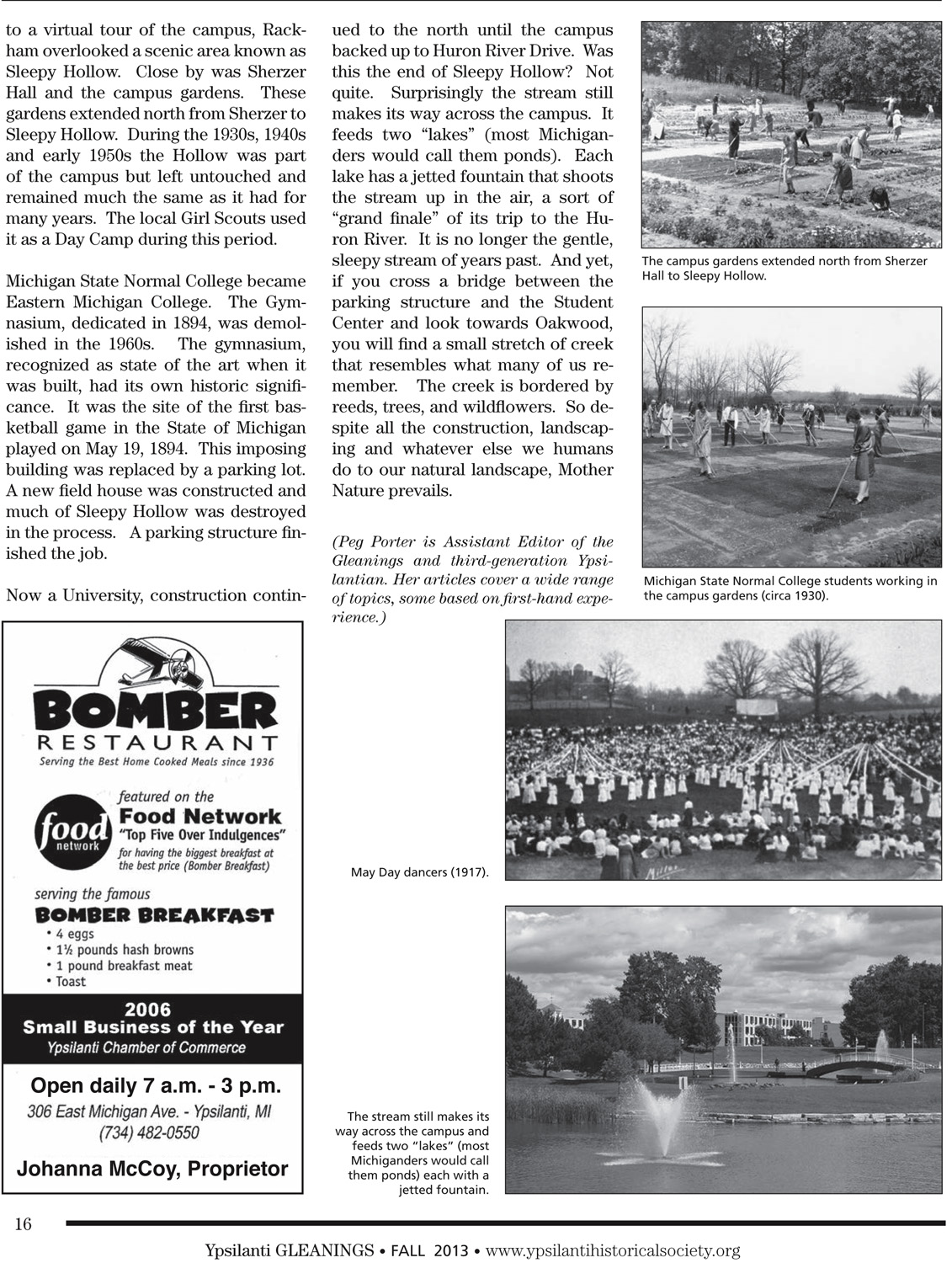 (Several contributors to Gleanings have included Sleepy Hollow in their stories. It occurred to me that many of our readers would not know what or where it was. One of my functions as an editor is to help clarify what the author intended. Sometimes this is as simple as unscrambling an awkward and confusing sentence. Other times more work is required. Such was the case with this article. There is virtually no written history of the Hollow. I tried another approach. That is to find people who remembered the place and who were able to expand my own somewhat sketchy recollections. For their help I thank Don Foreman, Karen Nickels, Pam DeLaittre, Joyce Wales Novak, Judy Morey, and Anne Tubbs Massey. I also drew on the writings of Jack Shepherd and Barney Hughes. Also thank you to the Eastern Michigan Archives especially for the photographs that illustrate this article.) A long time ago, before there was a Michigan State Normal, let alone an Eastern Michigan University, a small stream made its way from deep in Washtenaw County towards the Huron River. During the last part of its journey it was nearly parallel to the River itself. The stream traveled across the flat land that lay below the bluffs where, in the 1850s, the first buildings of a new educational institution were constructed. This institution was dedicated to the training of teachers, the second such school in the entire United States. A number of years passed before the little stream was to feel the effects of this change. Trees grew along its banks. In some places the trees thickened to form woods. Homes were built to the east as the small town of Ypsilanti expanded. The stream made its way through this newly developed area and joined the Huron close to the big bend where the river heads south toward Lake Erie. The earliest buildings that housed the college were on Cross Street. Eventually the small campus expanded to Forest Avenue, but no further. However, in 1913 the school, now the Michigan State Normal College, began expanding. The college administrators acquired sixty-five acres to the north and east. The acquisition included 43 acres belonging to T.C. Owen who had once sold mineral water from wells beneath what would become Roosevelt High School. The stream and surrounding areas were known as Sleepy Hollow, probably after the setting of Washington Irving’s famous short story, “The Legend of Sleepy Hollow.” How and when it was named is not recorded. Perhaps someone noted that Ichabod Crane, the primary character in the story, was a teacher as did Joyce Novak when asked to share her memories of the Hollow. All sorts of Ypsilanti residents began to visit the Hollow. Children splashed in the stream watching the minnows and crabs. Families visited, usually on the weekend to take a stroll along the stream and through the woods. And college students found their way down the hill to court their sweethearts or just commune with nature. During the snowy days of winter, the hills above were filled with sledders who could get a good run down to the more level land below. And spring brought May Day. Young female students, dressed all in white, danced around May Poles, an event that attracted numerous spectators. At the western end of the Hollow, kids from the nearby neighborhood played a boisterous game of Capture the Flag using the stream as the border between the two warring factions. In 1938 the Rackham School was built on what was then on the outer edge of the campus. According to a virtual tour of the campus, Rackham overlooked a scenic area known as Sleepy Hollow. Close by was Sherzer Hall and the campus gardens. These gardens extended north from Sherzer to Sleepy Hollow. During the 1930s, 1940s and early 1950s the Hollow was part of the campus but left untouched and remained much the same as it had for many years. The local Girl Scouts used it as a Day Camp during this period. Michigan State Normal College became Eastern Michigan College. The Gymnasium, dedicated in 1894, was demolished in the 1960s. The gymnasium, recognized as state of the art when it was built, had its own historic significance. It was the site of the first basketball game in the State of Michigan played on May 19, 1894. This imposing building was replaced by a parking lot. A new field house was constructed and much of Sleepy Hollow was destroyed in the process. A parking structure finished the job. Now a University, construction continued to the north until the campus backed up to Huron River Drive. Was this the end of Sleepy Hollow? Not quite. Surprisingly the stream still makes its way across the campus. It feeds two “lakes” (most Michiganders would call them ponds). Each lake has a jetted fountain that shoots the stream up in the air, a sort of “grand finale” of its trip to the Huron River. It is no longer the gentle, sleepy stream of years past. And yet, if you cross a bridge between the parking structure and the Student Center and look towards Oakwood, you will find a small stretch of creek that resembles what many of us remember. The creek is bordered by reeds, trees, and wildflowers. So despite all the construction, landscaping and whatever else we humans do to our natural landscape, Mother Nature prevails. (Peg Porter is Assistant Editor of the Gleanings and third-generation Ypsilantian. Her articles cover a wide range of topics, some based on first-hand experience.)

5. The stream still makes its way across the campus and feeds two “lakes” (most Michiganders would call them ponds) each with a jetted fountain.