Whiskey was the Antidote 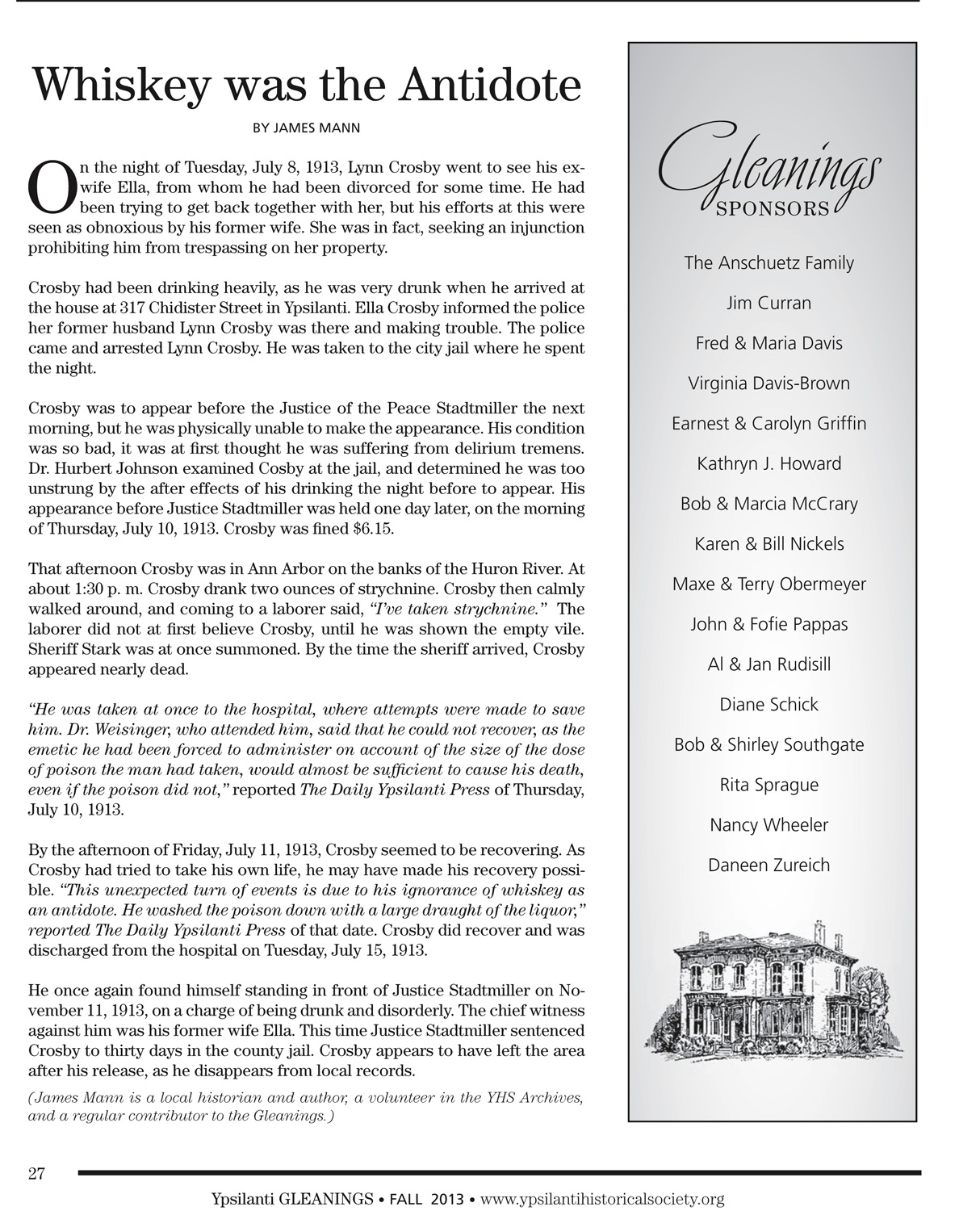 On the night of Tuesday, July 8, 1913, Lynn Crosby went to see his ex-wife Ella, from whom he had been divorced for some time. He had been trying to get back together with her, but his efforts at this were seen as obnoxious by his former wife. She was in fact, seeking an injunction prohibiting him from trespassing on her property.

Crosby had been drinking heavily, as he was very drunk when he arrived at the house at 317 Chidister Street in Ypsilanti. Ella Crosby informed the police her former husband Lynn Crosby was there and making trouble. The police came and arrested Lynn Crosby. He was taken to the city jail where he spent the night.

Crosby was to appear before the Justice of the Peace Stadtmiller the next morning, but he was physically unable to make the appearance. His condition was so bad, it was at first thought he was suffering from delirium tremens. Dr. Hurbert Johnson examined Cosby at the jail, and determined he was too unstrung by the after effects of his drinking the night before to appear. His appearance before Justice Stadtmiller was held one day later, on the morning of Thursday, July 10, 1913. Crosby was fined $6.15.

That afternoon Crosby was in Ann Arbor on the banks of the Huron River. At about 1:30 p. m. Crosby drank two ounces of strychnine. Crosby then calmly walked around, and coming to a laborer said, “I’ve taken strychnine.” The laborer did not at first believe Crosby, until he was shown the empty vile. Sheriff Stark was at once summoned. By the time the sheriff arrived, Crosby appeared nearly dead.

“He was taken at once to the hospital, where attempts were made to save him. Dr. Weisinger, who attended him, said that he could not recover, as the emetic he had been forced to administer on account of the size of the dose of poison the man had taken, would almost be sufficient to cause his death, even if the poison did not,” reported The Daily Ypsilanti Press of Thursday, July 10, 1913.

By the afternoon of Friday, July 11, 1913, Crosby seemed to be recovering. As Crosby had tried to take his own life, he may have made his recovery possible. “This unexpected turn of events is due to his ignorance of whiskey as an antidote. He washed the poison down with a large draught of the liquor,” reported The Daily Ypsilanti Press of that date. Crosby did recover and was discharged from the hospital on Tuesday, July 15, 1913.

He once again found himself standing in front of Justice Stadtmiller on November 11, 1913, on a charge of being drunk and disorderly. The chief witness against him was his former wife Ella. This time Justice Stadtmiller sentenced Crosby to thirty days in the county jail. Crosby appears to have left the area after his release, as he disappears from local records.