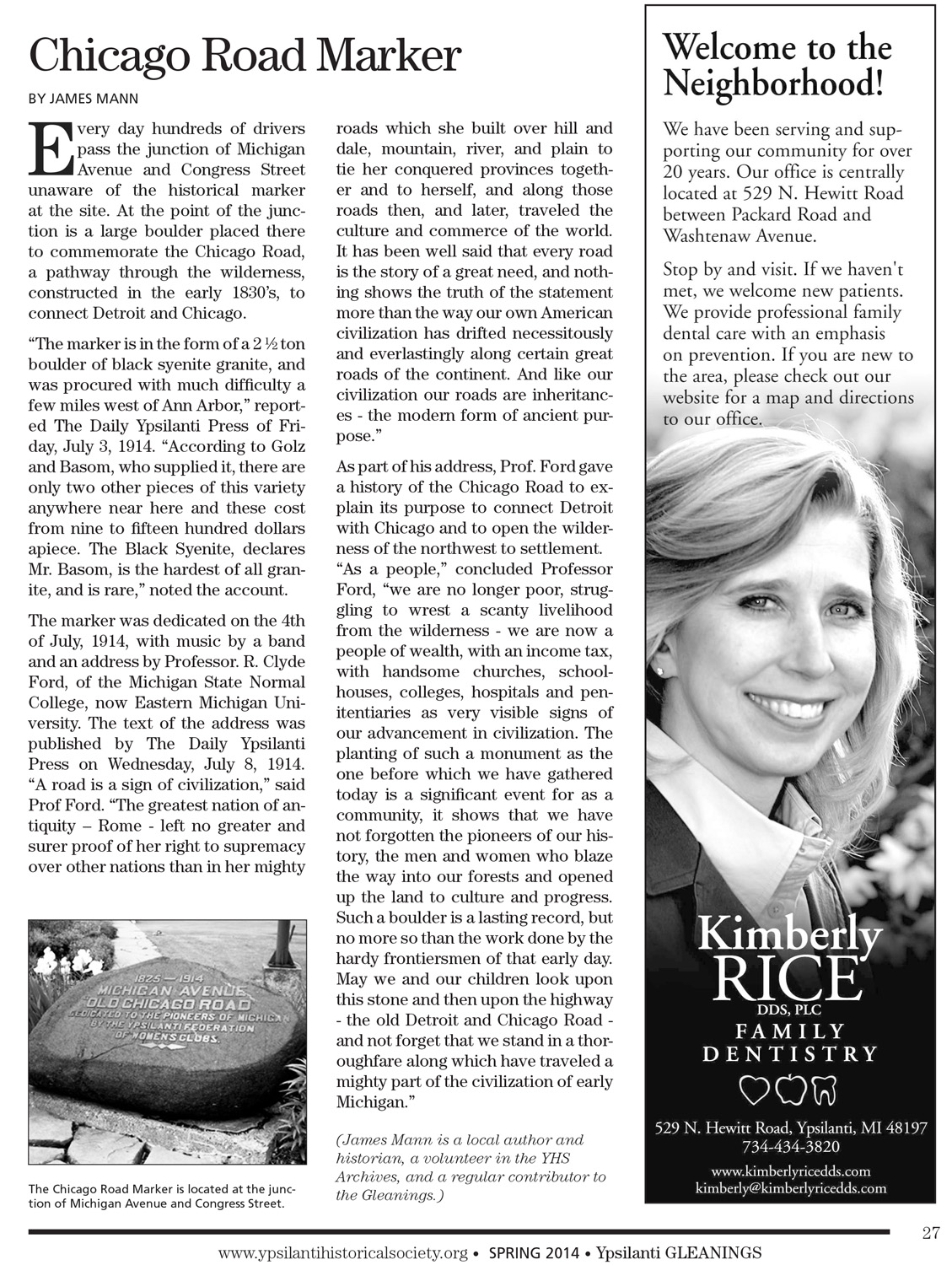 Every day hundreds of drivers pass the junction of Michigan Avenue and Congress Street unaware of the historical marker at the site. At the point of the junction is a large boulder placed there to commemorate the Chicago Road, a pathway through the wilderness, constructed in the early 1830’s, to connect Detroit and Chicago.

“The marker is in the form of a 2 ½ ton boulder of black syenite granite, and was procured with much difficulty a few miles west of Ann Arbor,” reported The Daily Ypsilanti Press of Friday, July 3, 1914. “According to Golz and Basom, who supplied it, there are only two other pieces of this variety anywhere near here and these cost from nine to fifteen hundred dollars apiece. The Black Syenite, declares Mr. Basom, is the hardest of all granite, and is rare,” noted the account.

The marker was dedicated on the 4th of July, 1914, with music by a band and an address by Professor. R. Clyde Ford, of the Michigan State Normal College, now Eastern Michigan University. The text of the address was published by The Daily Ypsilanti Press on Wednesday, July 8, 1914. “A road is a sign of civilization,” said Prof Ford. “The greatest nation of antiquity – Rome - left no greater and surer proof of her right to supremacy over other nations than in her mighty roads which she built over hill and dale, mountain, river, and plain to tie her conquered provinces together and to herself, and along those roads then, and later, traveled the culture and commerce of the world. It has been well said that every road is the story of a great need, and nothing shows the truth of the statement more than the way our own American civilization has drifted necessitously and everlastingly along certain great roads of the continent. And like our civilization our roads are inheritances - the modern form of ancient purpose.”

As part of his address, Prof. Ford gave a history of the Chicago Road to explain its purpose to connect Detroit with Chicago and to open the wilderness of the northwest to settlement.
“As a people,” concluded Professor Ford, “we are no longer poor, struggling to wrest a scanty livelihood from the wilderness - we are now a people of wealth, with an income tax, with handsome churches, schoolhouses, colleges, hospitals and penitentiaries as very visible signs of our advancement in civilization. The planting of such a monument as the one before which we have gathered today is a significant event for as a community, it shows that we have not forgotten the pioneers of our history, the men and women who blaze the way into our forests and opened up the land to culture and progress. Such a boulder is a lasting record, but no more so than the work done by the hardy frontiersmen of that early day. May we and our children look upon this stone and then upon the highway - the old Detroit and Chicago Road - and not forget that we stand in a thoroughfare along which have traveled a mighty part of the civilization of early Michigan.”

Photo 1: The Chicago Road Marker is located at the junction of Michigan Avenue and Congress Street.