Artist Lays Down His Brush 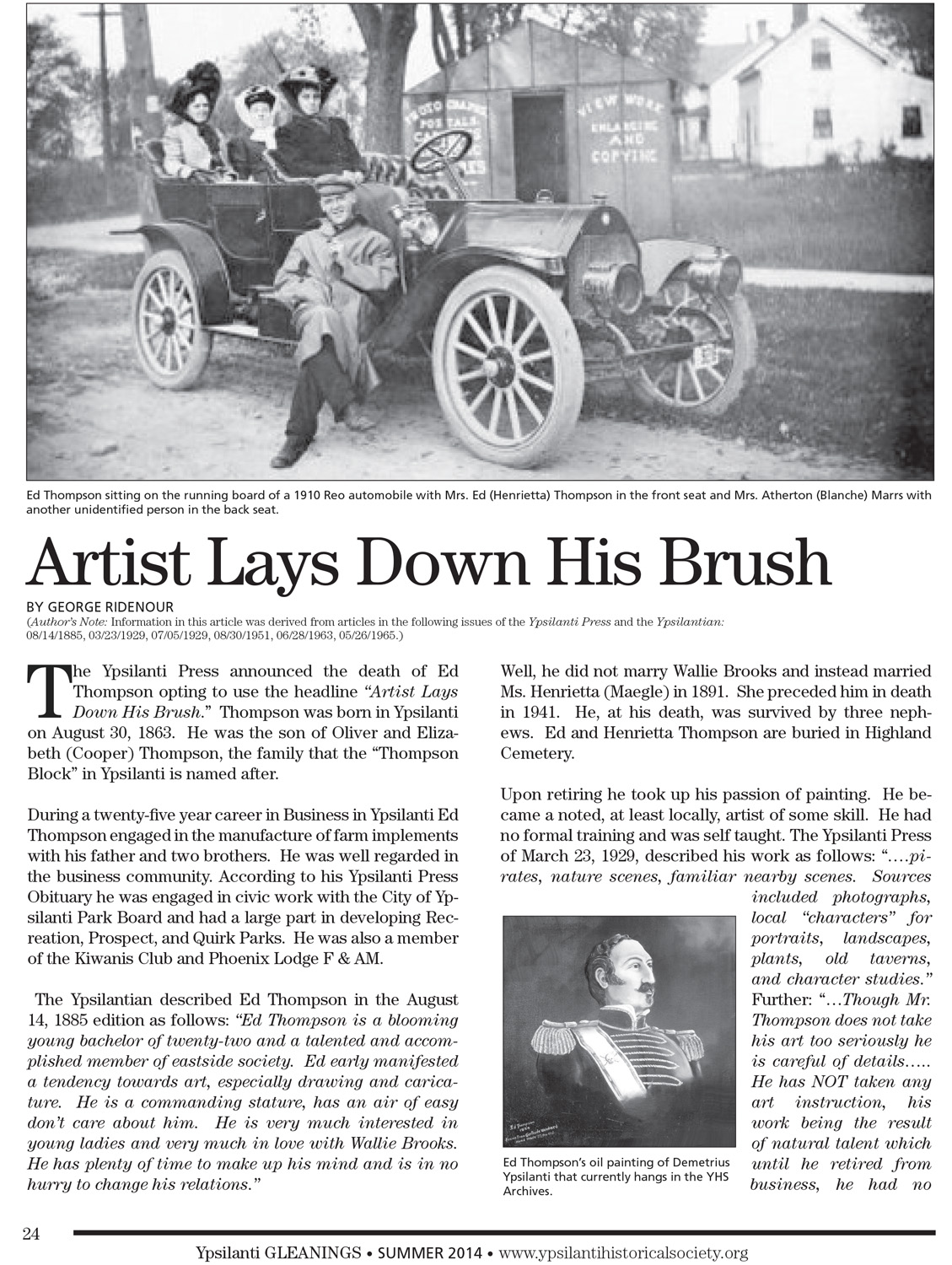 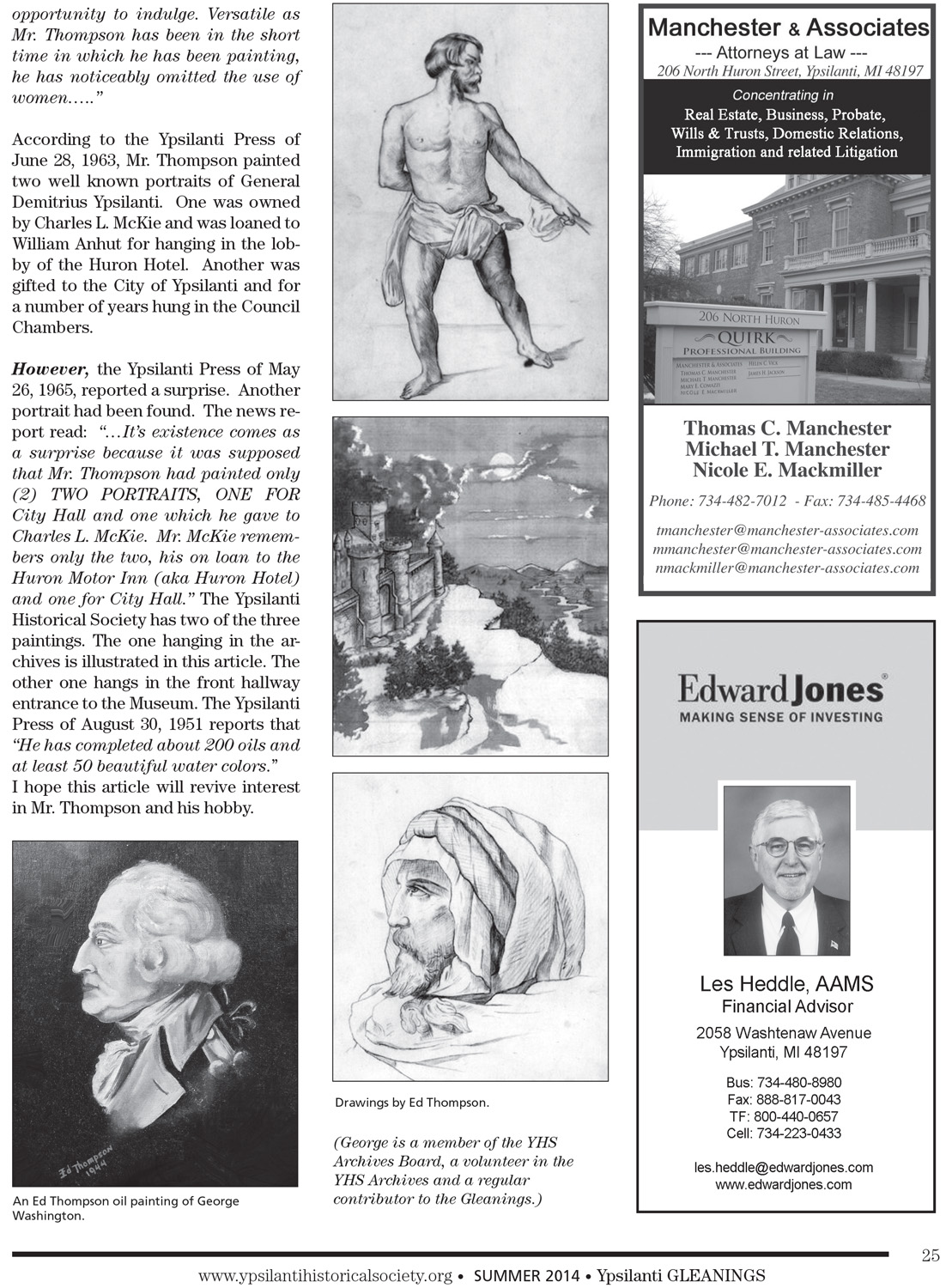 (Author’s Note: Information in this article was derived from articles in the following issues of the Ypsilanti Press and the Ypsilantian: 08/14/1885, 03/23/1929, 07/05/1929, 08/30/1951, 06/28/1963, 05/26/1965.) The Ypsilanti Press announced the death of Ed Thompson opting to use the headline “Artist Lays Down His Brush.” Thompson was born in Ypsilanti on August 30, 1863. He was the son of Oliver and Elizabeth (Cooper) Thompson, the family that the “Thompson Block” in Ypsilanti is named after. During a twenty-five year career in Business in Ypsilanti Ed Thompson engaged in the manufacture of farm implements with his father and two brothers. He was well regarded in the business community. According to his Ypsilanti Press Obituary he was engaged in civic work with the City of Ypsilanti Park Board and had a large part in developing Recreation, Prospect, and Quirk Parks. He was also a member of the Kiwanis Club and Phoenix Lodge F & AM. The Ypsilantian described Ed Thompson in the August 14, 1885 edition as follows: “Ed Thompson is a blooming young bachelor of twenty-two and a talented and accomplished member of eastside society. Ed early manifested a tendency towards art, especially drawing and caricature. He is a commanding stature, has an air of easy don’t care about him. He is very much interested in young ladies and very much in love with Wallie Brooks. He has plenty of time to make up his mind and is in no hurry to change his relations.” Well, he did not marry Wallie Brooks and instead married Ms. Henrietta (Maegle) in 1891. She preceded him in death in 1941. He, at his death, was survived by three nephews. Ed and Henrietta Thompson are buried in Highland Cemetery. Upon retiring he took up his passion of painting. He became a noted, at least locally, artist of some skill. He had no formal training and was self taught. The Ypsilanti Press of March 23, 1929, described his work as follows: “….pirates, nature scenes, familiar nearby scenes. Sources included photographs, local “characters” for portraits, landscapes, plants, old taverns, and character studies.” Further: “…Though Mr. Thompson does not take his art too seriously he is careful of details…..He has NOT taken any art instruction, his work being the result of natural talent which until he retired from business, he had no opportunity to indulge. Versatile as Mr. Thompson has been in the short time in which he has been painting, he has noticeably omitted the use of women…..” According to the Ypsilanti Press of June 28, 1963, Mr. Thompson painted two well known portraits of General Demitrius Ypsilanti. One was owned by Charles L. McKie and was loaned to William Anhut for hanging in the lobby of the Huron Hotel. Another was gifted to the City of Ypsilanti and for a number of years hung in the Council Chambers. However, the Ypsilanti Press of May 26, 1965, reported a surprise. Another portrait had been found. The news report read: “…It’s existence comes as a surprise because it was supposed that Mr. Thompson had painted only (2) TWO PORTRAITS, ONE FOR City Hall and one which he gave to Charles L. McKie. Mr. McKie remembers only the two, his on loan to the Huron Motor Inn (aka Huron Hotel) and one for City Hall.” The Ypsilanti Historical Society has two of the three paintings. The one hanging in the archives is illustrated in his article. The other one hangs in the front hallway entrance to the Museum. The Ypsilanti Press of August 30, 1951 reports that “He has completed about 200 oils and at least 50 beautiful water colors.” I hope this article will revive interest in Mr. Thompson and his hobby. (George is a member of the YHS Archives Board, a volunteer in the YHS Archives and a regular contributor to the Gleanings.)

Photo Captions: Photo 1: Ed Thompson sitting on the running board of a 1910 Reo automobile with Mrs. Ed (Henrietta) Thompson in the front seat and Mrs. Atherton (Blanche) Marrs with another unidentified person in the back seat.