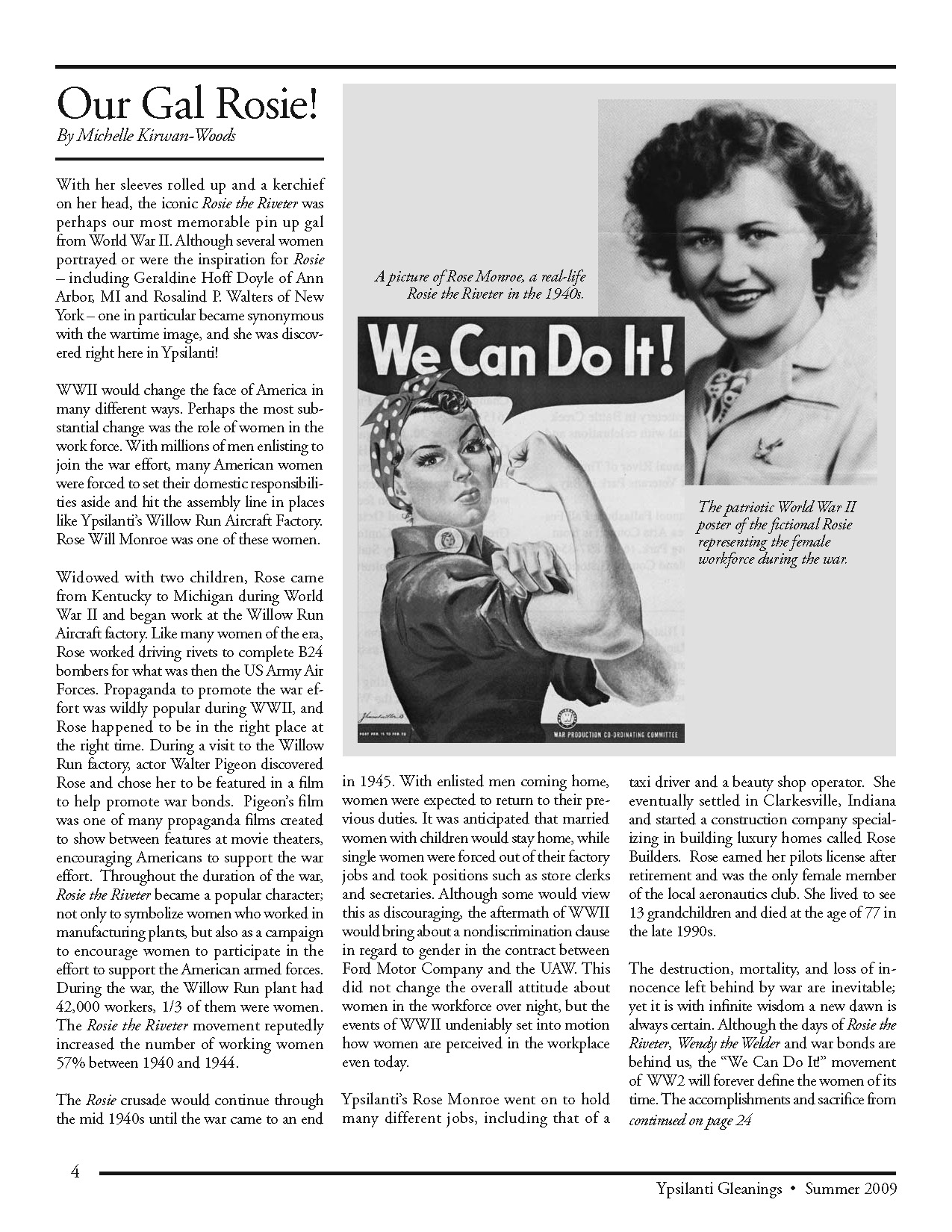 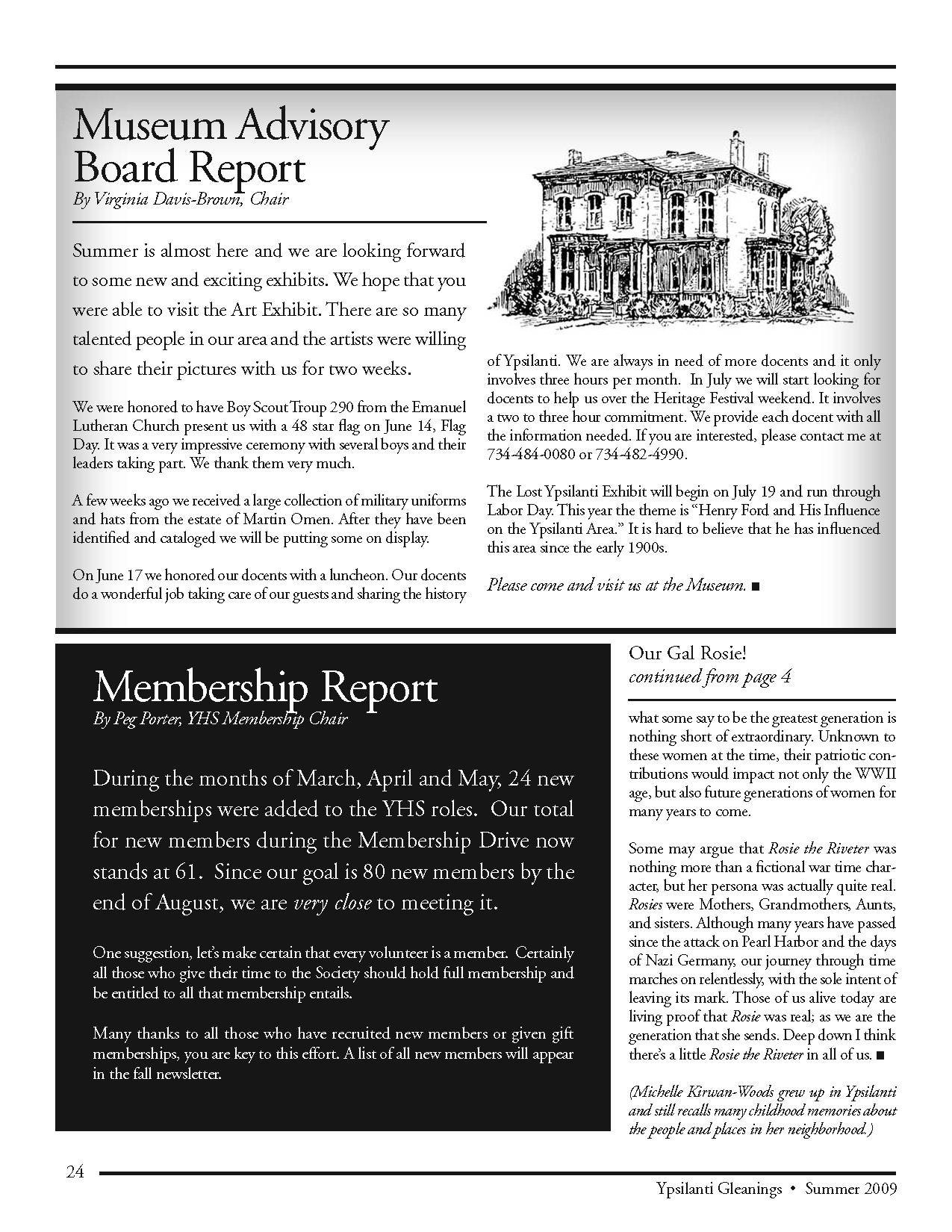 With her sleeves rolled up and a kerchief on her head, the iconic Rosie the Riveter was perhaps our most memorable pin up gal from World War II. Although several women portrayed or were the inspiration for Rosie – including Geraldine Hoff Doyle of Ann Arbor, MI and Rosalind P. Walters of New York – one in particular became synonymous with the wartime image, and she was discovered right here in Ypsilanti! WWII would change the face of America in many different ways. Perhaps the most substantial change was the role of women in the work force. With millions of men enlisting to join the war effort, many American women were forced to set their domestic responsibilities aside and hit the assembly line in places like Ypsilanti’s Willow Run Aircraft Factory. Rose Will Monroe was one of these women. Widowed with two children, Rose came from Kentucky to Michigan during World War II and began work at the Willow Run Aircraft factory. Like many women of the era, Rose worked driving rivets to complete B24 bombers for what was then the US Army Air Forces. Propaganda to promote the war effort was wildly popular during WWII, and Rose happened to be in the right place at the right time. During a visit to the Willow Run factory, actor Walter Pigeon discovered Rose and chose her to be featured in a film to help promote war bonds. Pigeon’s film was one of many propaganda films created to show between features at movie theaters, encouraging Americans to support the war effort. Throughout the duration of the war, Rosie the Riveter became a popular character; not only to symbolize women who worked in manufacturing plants, but also as a campaign to encourage women to participate in the effort to support the American armed forces. During the war, the Willow Run plant had 42,000 workers, 1/3 of them were women. The Rosie the Riveter movement reputedly increased the number of working women 57% between 1940 and 1944. The Rosie crusade would continue through the mid 1940s until the war came to an end in 1945. With enlisted men coming home, women were expected to return to their previous duties. It was anticipated that married women with children would stay home, while single women were forced out of their factory jobs and took positions such as store clerks and secretaries. Although some would view this as discouraging, the aftermath of WWII would bring about a nondiscrimination clause in regard to gender in the contract between Ford Motor Company and the UAW. This did not change the overall attitude about women in the workforce over night, but the events of WWII undeniably set into motion how women are perceived in the workplace even today. Ypsilanti’s Rose Monroe went on to hold many different jobs, including that of a taxi driver and a beauty shop operator. She eventually settled in Clarkesville, Indiana and started a construction company specializing in building luxury homes called Rose Builders. Rose earned her pilots license after retirement and was the only female member of the local aeronautics club. She lived to see 13 grandchildren and died at the age of 77 in the late 1990s. The destruction, mortality, and loss of innocence left behind by war are inevitable; yet it is with infinite wisdom a new dawn is always certain. Although the days of Rosie the Riveter, Wendy the Welder and war bonds are behind us, the “We Can Do It!” movement of WW2 will forever define the women of its time. The accomplishments and sacrifice from what some say to be the greatest generation is nothing short of extraordinary. Unknown to these women at the time, their patriotic contributions would impact not only the WWII age, but also future generations of women for many years to come. Some may argue that Rosie the Riveter was nothing more than a fictional war time character, but her persona was actually quite real. Rosies were Mothers, Grandmothers, Aunts, and sisters. Although many years have passed since the attack on Pearl Harbor and the days of Nazi Germany, our journey through time marches on relentlessly, with the sole intent of leaving its mark. Those of us alive today are living proof that Rosie was real; as we are the generation that she sends. Deep down I think there’s a little Rosie the Riveter in all of us. (Michelle Kirwan-Woods grew up in Ypsilanti and still recalls many childhood memories about the people and places in her neighborhood.)
Photo 1: The patriotic World War II poster of the fictional Rosie representing the female workforce during the war.

Photo 2: A picture of Rose Monroe, a real-life Rosie the Riveter in the 1940s.