The Cannon Caper in Prospect Park 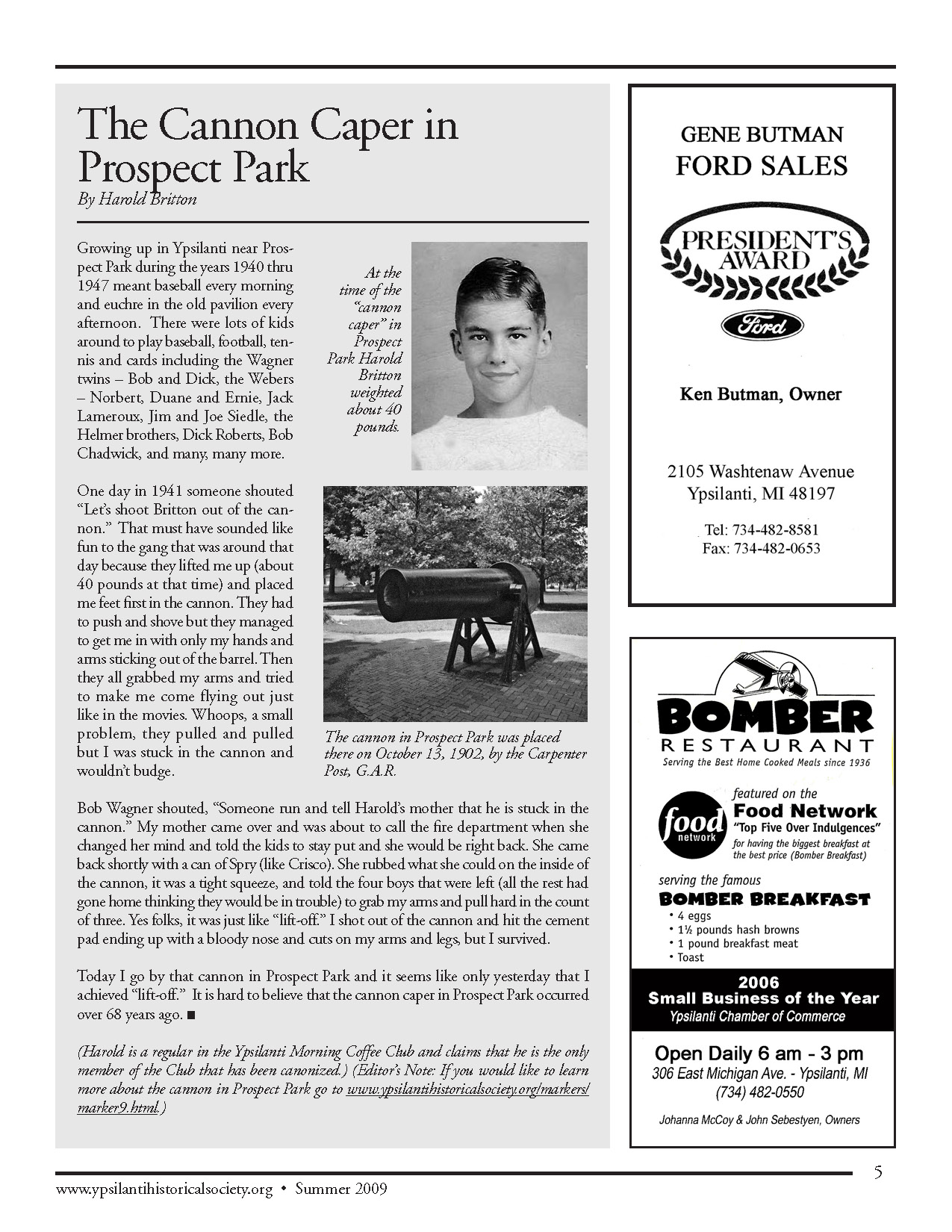 Growing up in Ypsilanti near Prospect Park during the years 1940 thru 1947 meant baseball every morning and euchre in the old pavilion every afternoon. There were lots of kids around to play baseball, football, tennis and cards including the Wagner twins – Bob and Dick, the Webers – Norbert, Duane and Ernie, Jack Lameroux, Jim and Joe Siedle, the Helmer brothers, Dick Roberts, Bob Chadwick, and many, many more. One day in 1941 someone shouted “Let’s shoot Britton out of the cannon.” That must have sounded like fun to the gang that was around that day because they lifted me up (about 40 pounds at that time) and placed me feet first in the cannon. They had to push and shove but they managed to get me in with only my hands and arms sticking out of the barrel. Then they all grabbed my arms and tried to make me come flying out just like in the movies. Whoops, a small problem, they pulled and pulled but I was stuck in the cannon and wouldn’t budge. Bob Wagner shouted, “Someone run and tell Harold’s mother that he is stuck in the cannon.” My mother came over and was about to call the fire department when she changed her mind and told the kids to stay put and she would be right back. She came back shortly with a can of Spry (like Crisco). She rubbed what she could on the inside of the cannon, it was a tight squeeze, and told the four boys that were left (all the rest had gone home thinking they would be in trouble) to grab my arms and pull hard in the count of three. Yes folks, it was just like “lift-off.” I shot out of the cannon and hit the cement pad ending up with a bloody nose and cuts on my arms and legs, but I survived. Today I go by that cannon in Prospect Park and it seems like only yesterday that I achieved “lift-off.” It is hard to believe that the cannon caper in Prospect Park occurred over 68 years ago. (Harold is a regular in the Ypsilanti Morning Coffee Club and claims that he is the only member of the Club that has been canonized.) (Editor’s Note: If you would like to learn more about the cannon in Prospect Park go to www.ypsilantihistoricalsociety.org/markers/marker9.html.)
Photo 1: The cannon in Prospect Park was placed there on October 13, 1902, by the Carpenter Post, G.A.R.

Photo 2: At the time of the "cannon caper" in Prospect Park Harold Britton weighted about 40 pounds.