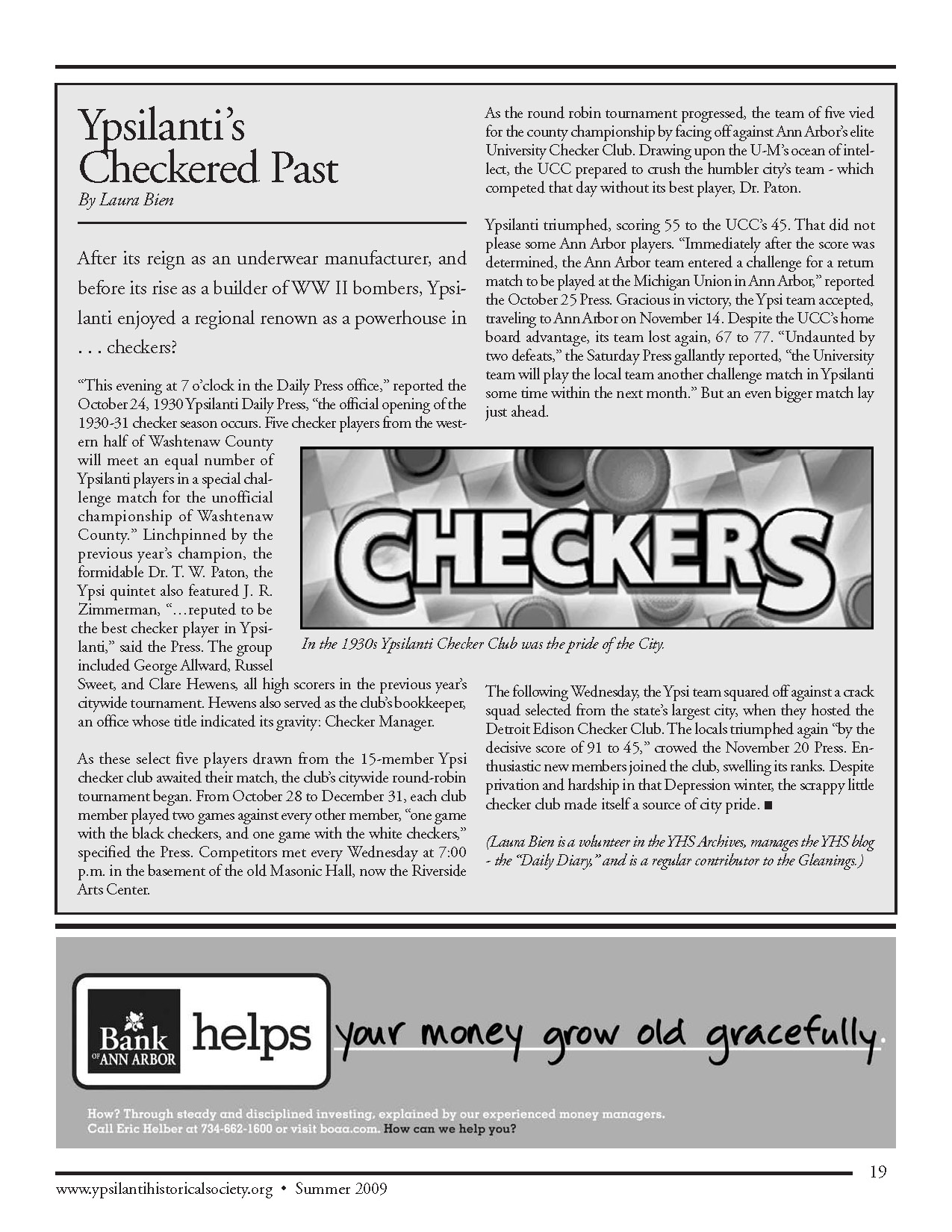 After its reign as an underwear manufacturer, and before its rise as a builder of WW II bombers, Ypsilanti enjoyed a regional renown as a powerhouse in . . . checkers? “This evening at 7 o’clock in the Daily Press office,” reported the October 24, 1930 Ypsilanti Daily Press, “the official opening of the 1930-31 checker season occurs. Five checker players from the western half of Washtenaw County will meet an equal number of Ypsilanti players in a special challenge match for the unofficial championship of Washtenaw County.” Linchpinned by the previous year’s champion, the formidable Dr. T. W. Paton, the Ypsi quintet also featured J. R. Zimmerman, “…reputed to be the best checker player in Ypsilanti,” said the Press. The group included George Allward, Russel Sweet, and Clare Hewens, all high scorers in the previous year’s citywide tournament. Hewens also served as the club’s bookkeeper, an office whose title indicated its gravity: Checker Manager. As these select five players drawn from the 15-member Ypsi checker club awaited their match, the club’s citywide round-robin tournament began. From October 28 to December 31, each club member played two games against every other member, “one game with the black checkers, and one game with the white checkers,” specified the Press. Competitors met every Wednesday at 7:00 p.m. in the basement of the old Masonic Hall, now the Riverside Arts Center. As the round robin tournament progressed, the team of five vied for the county championship by facing off against Ann Arbor’s elite University Checker Club. Drawing upon the U-M’s ocean of intel- lect, the UCC prepared to crush the humbler city’s team - which competed that day without its best player, Dr. Paton. Ypsilanti triumphed, scoring 55 to the UCC’s 45. That did not please some Ann Arbor players. “Immediately after the score was determined, the Ann Arbor team entered a challenge for a return match to be played at the Michigan Union in Ann Arbor,” reported the October 25 Press. Gracious in victory, the Ypsi team accepted, traveling to Ann Arbor on November 14. Despite the UCC’s home board advantage, its team lost again, 67 to 77. “Undaunted by two defeats,” the Saturday Press gallantly reported, “the University team will play the local team another challenge match in Ypsilanti some time within the next month.” But an even bigger match lay just ahead. The following Wednesday, the Ypsi team squared off against a crack squad selected from the state’s largest city, when they hosted the Detroit Edison Checker Club. The locals triumphed again “by the decisive score of 91 to 45,” crowed the November 20 Press. Enthusiastic new members joined the club, swelling its ranks. Despite privation and hardship in that Depression winter, the scrappy little checker club made itself a source of city pride. (Laura Bien is a volunteer in the YHS Archives, manages the YHS blog - the “Daily Diary,” and is a regular contributor to the Gleanings.) Photo 1: Checkers