Ypsilanti Christmas in the 1950s 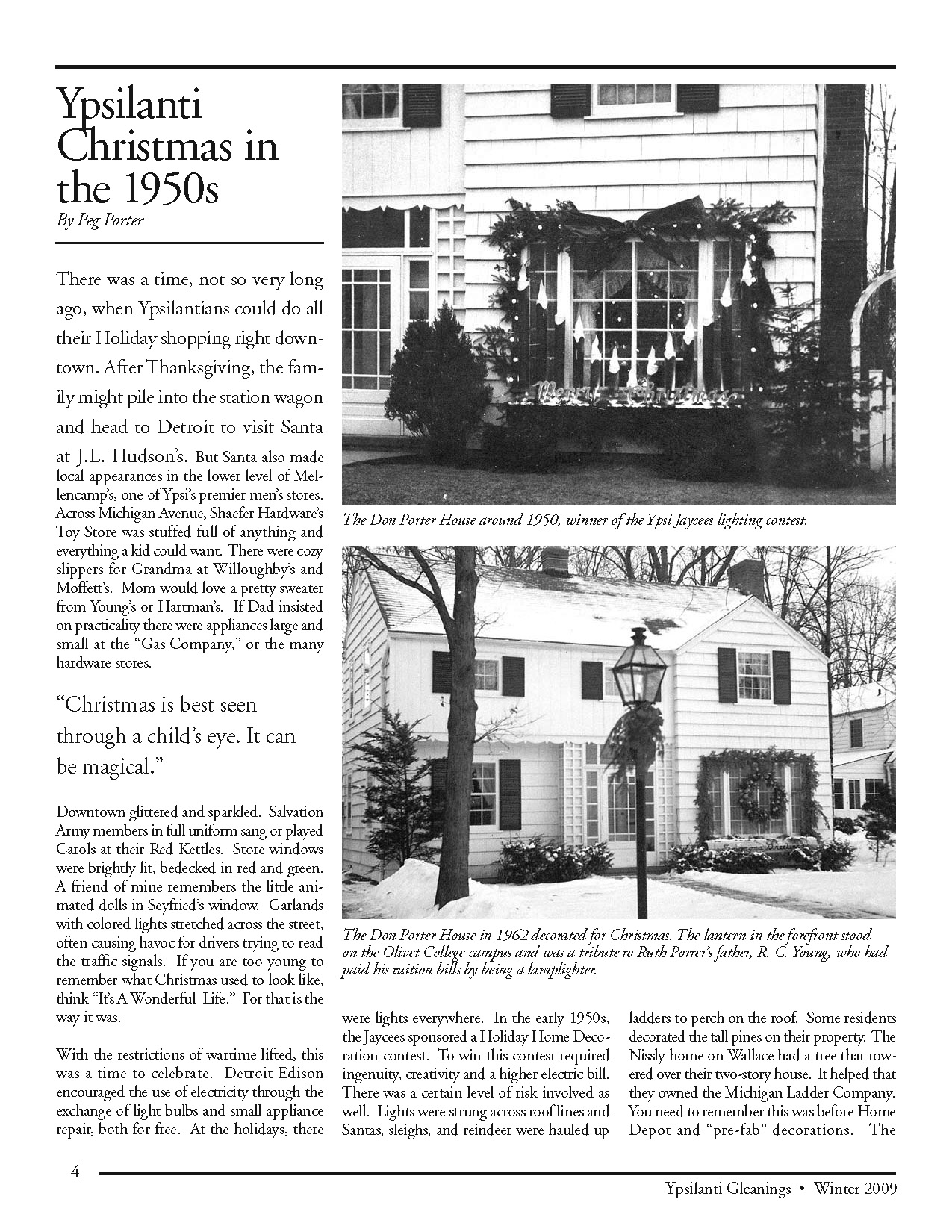 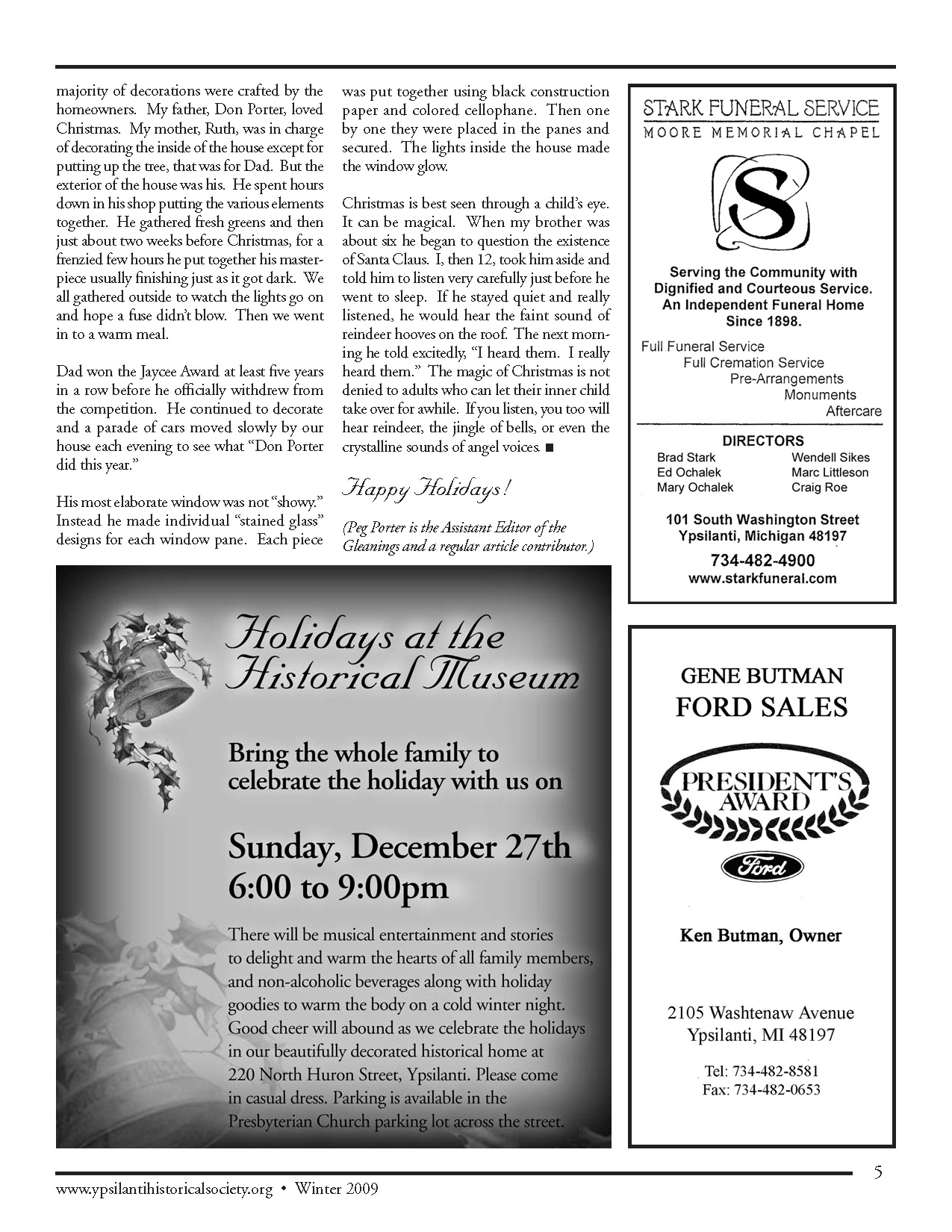 There was a time, not so very long ago, when Ypsilantians could do all their Holiday shopping right downtown. After Thanksgiving, the family might pile into the station wagon and head to Detroit to visit Santa at J.L. Hudson’s. But Santa also made local appearances in the lower level of Mellencamp’s, one of Ypsi’s premier men's stores. Across Michigan Avenue, Shaefer Hardware’s Toy Store was stuffed full of anything and everything a kid could want. There were cozy slippers for Grandma at Willoughby’s and Moffett’s. Mom would love a pretty sweater from Young’s or Hartman’s. If Dad insisted on practicality there were appliances large and small at the “Gas Company,” or the many hardware stores. Downtown glittered and sparkled. Salvation Army members in full uniform sang or played Carols at their Red Kettles. Store windows were brightly lit, bedecked in red and green. A friend of mine remembers the little animated dolls in Seyfried’s window. Garlands with colored lights stretched across the street, often causing havoc for drivers trying to read the traffic signals. If you are too young to remember what Christmas used to look like, think “It’s A Wonderful Life.” For that is the way it was. With the restrictions of wartime lifted, this was a time to celebrate. Detroit Edison encouraged the use of electricity through the exchange of light bulbs and small appliance repair, both for free. At the holidays, there were lights everywhere. In the early 1950s, the Jaycees sponsored a Holiday Home Decoration contest. To win this contest required ingenuity, creativity and a higher electric bill. There was a certain level of risk involved as well. Lights were strung across roof lines and Santas, sleighs, and reindeer were hauled up ladders to perch on the roof. Some residents decorated the tall pines on their property. The Nissly home on Wallace had a tree that towered over their two-story house. It helped that they owned the Michigan Ladder Company. You need to remember this was before Home Depot and “pre-fab” decorations. The majority of decorations were crafted by the homeowners. My father, Don Porter, loved Christmas. My mother, Ruth, was in charge of decorating the inside of the house except for putting up the tree, that was for Dad. But the exterior of the house was his. He spent hours down in his shop putting the various elements together. He gathered fresh greens and then just about two weeks before Christmas, for a frenzied few hours he put together his masterpiece usually finishing just as it got dark. We all gathered outside to watch the lights go on and hope a fuse didn’t blow. Then we went in to a warm meal. Dad won the Jaycee Award at least five years in a row before he officially withdrew from the competition. He continued to decorate and a parade of cars moved slowly by our house each evening to see what “Don Porter did this year.” His most elaborate window was not “showy.” Instead he made individual “stained glass” designs for each window pane. Each piece was put together using black construction paper and colored cellophane. Then one by one they were placed in the panes and secured. The lights inside the house made the window glow. Christmas is best seen through a child’s eye. It can be magical. When my brother was about six he began to question the existence of Santa Claus. I, then 12, took him aside and told him to listen very carefully just before he went to sleep. If he stayed quiet and really listened, he would hear the faint sound of reindeer hooves on the roof. The next morning he told excitedly, “I heard them. I really heard them.” The magic of Christmas is not denied to adults who can let their inner child take over for awhile. If you listen, you too will hear reindeer, the jingle of bells, or even the crystalline sounds of angel voices. Happy Holidays! (Peg Porter is the Assistant Editor of the Gleanings and a regular article contributor.) Photo Captions: Photo 1: The Don Porter House around 1950, winner of the Ypsi Jaycees lighting contest.

Photo 2: The Don Porter House in 1962 decorated for Christmas. The lantern in the forefront stood on the Olivet College campus and was a tribute to Ruth Porter’s father, R. C. Young, who had paid his tuition bills by being a lamplighter.