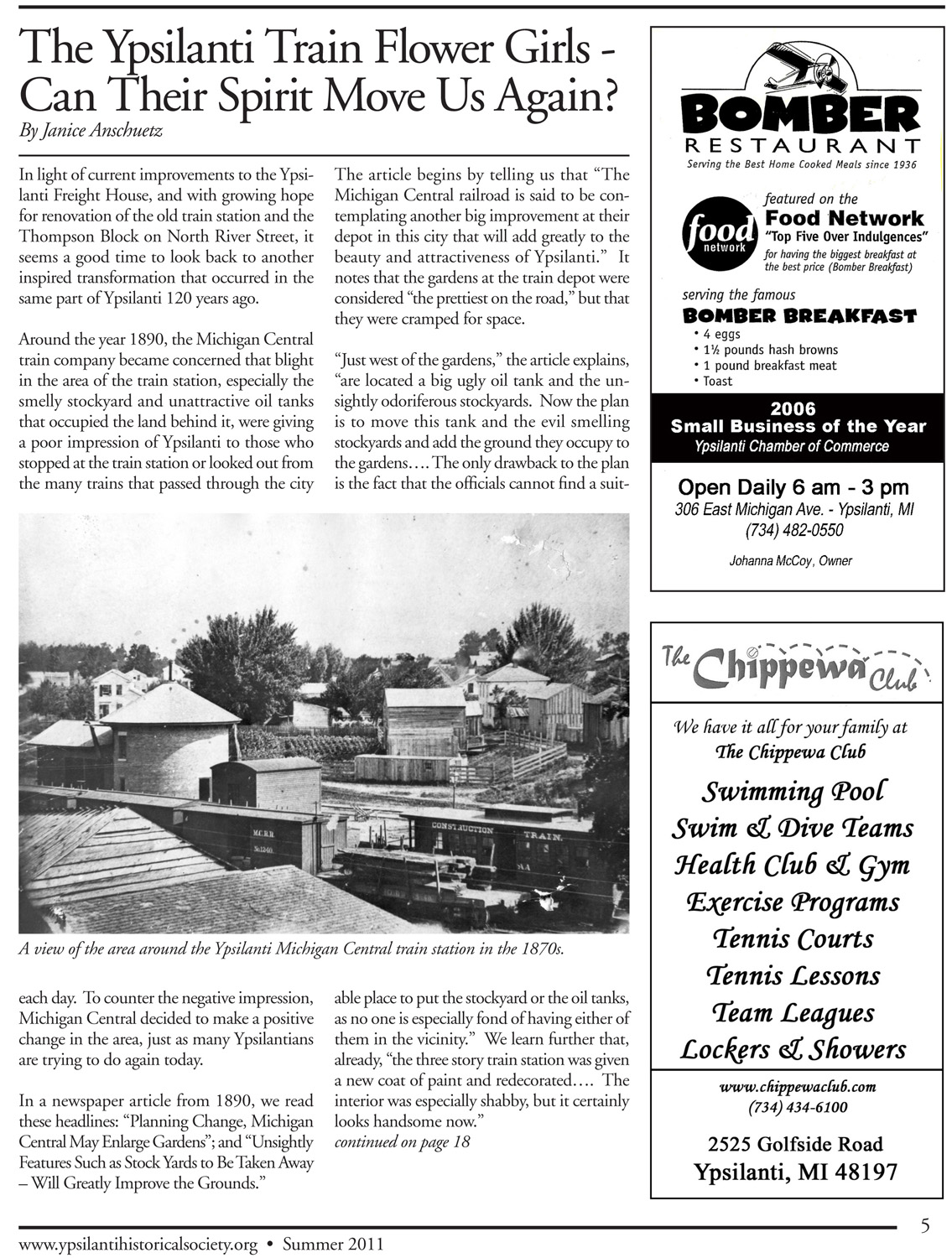 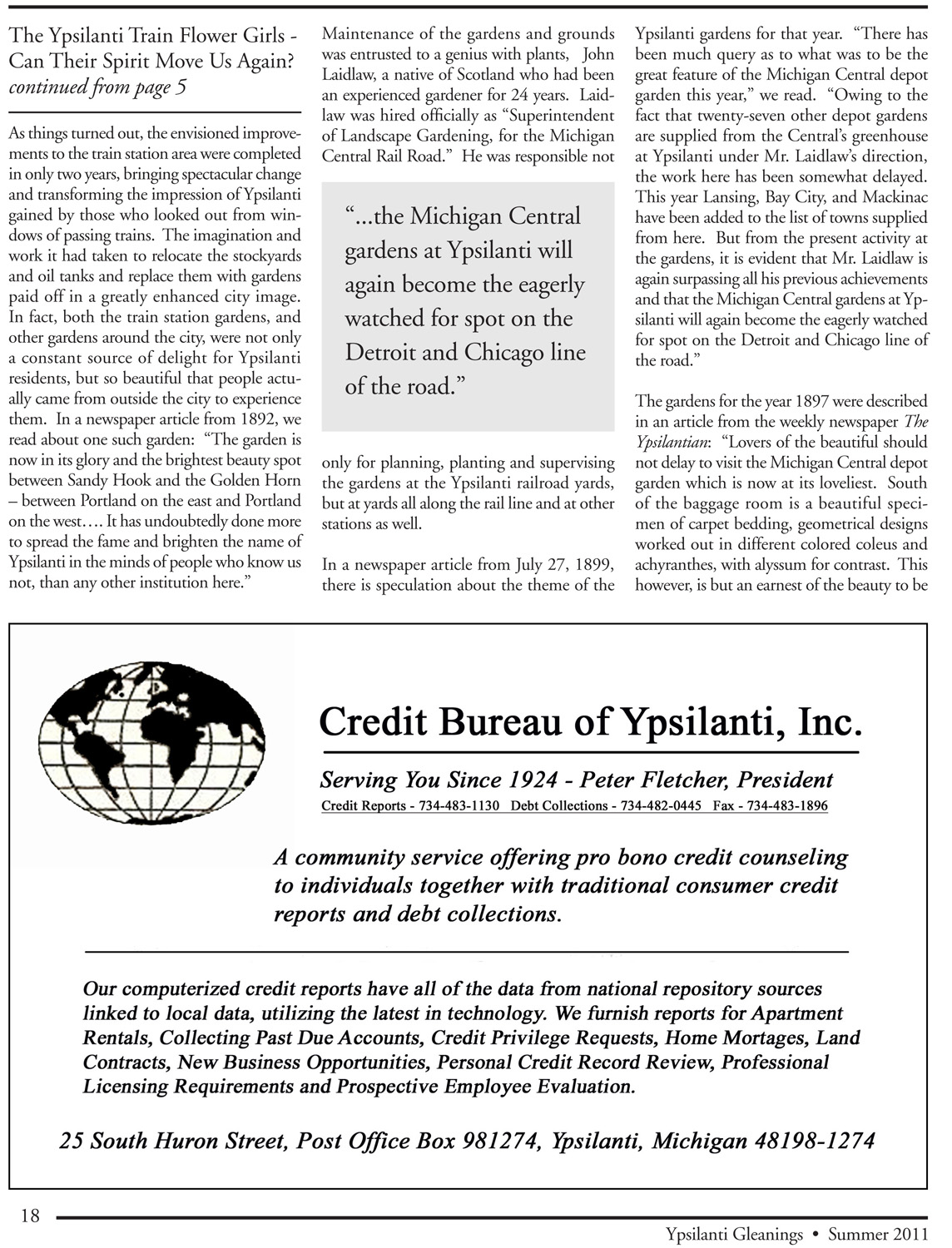 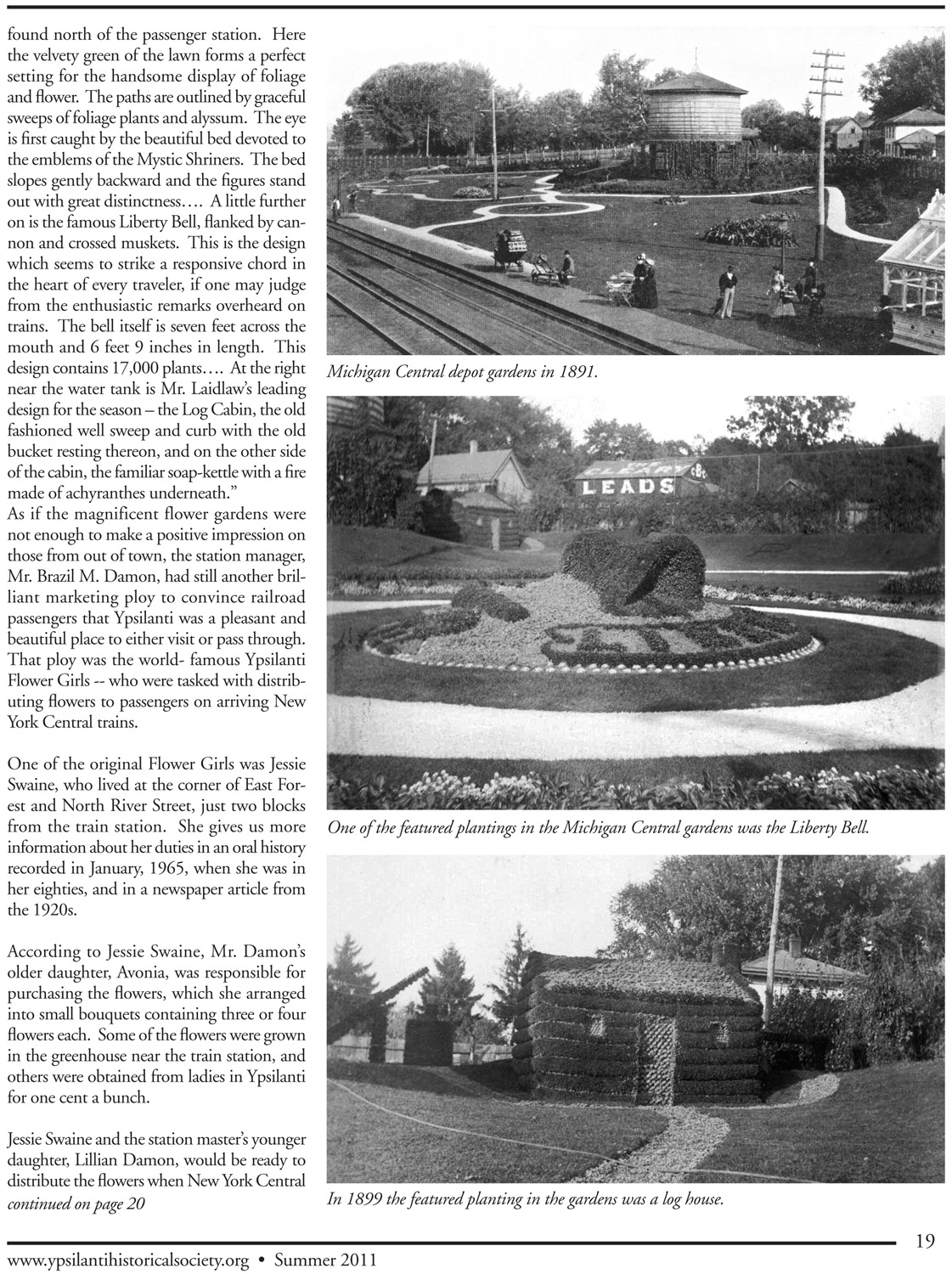 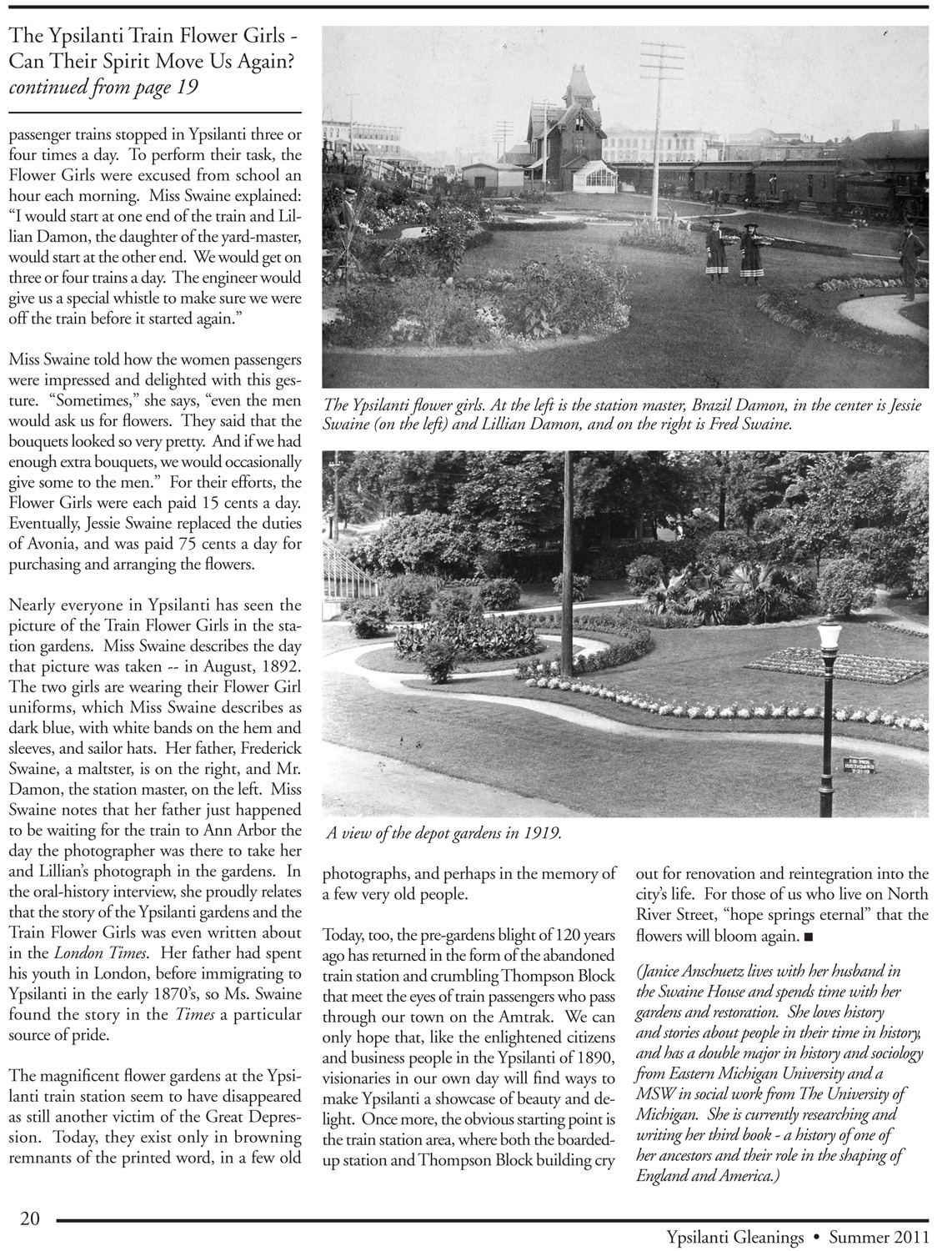 In light of current improvements to the Ypsilanti Freight House, and with growing hope for renovation of the old train station and the Thompson Block on North River Street, it seems a good time to look back to another inspired transformation that occurred in the same part of Ypsilanti 120 years ago.

Around the year 1890, the Michigan Central train company became concerned that blight in the area of the train station, especially the smelly stockyard and unattractive oil tanks that occupied the land behind it, were giving a poor impression of Ypsilanti to those who stopped at the train station or looked out from the many trains that passed through the city each day. To counter the negative impression, Michigan Central decided to make a positive change in the area, just as many Ypsilantians are trying to do again today.

In a newspaper article from 1890, we read these headlines: “Planning Change, Michigan Central May Enlarge Gardens”; and “Unsightly Features Such as Stock Yards to Be Taken Away – Will Greatly Improve the Grounds.”

The article begins by telling us that “The Michigan Central railroad is said to be contemplating another big improvement at their depot in this city that will add greatly to the beauty and attractiveness of Ypsilanti.” It notes that the gardens at the train depot were considered “the prettiest on the road,” but that they were cramped for space.

“Just west of the gardens,” the article explains, “are located a big ugly oil tank and the unsightly odoriferous stockyards. Now the plan is to move this tank and the evil smelling stockyards and add the ground they occupy to the gardens…. The only drawback to the plan is the fact that the officials cannot find a suitable place to put the stockyard or the oil tanks, as no one is especially fond of having either of them in the vicinity.” We learn further that, already, “the three story train station was given a new coat of paint and redecorated…. The interior was especially shabby, but it certainly looks handsome now.”

As things turned out, the envisioned improvements to the train station area were completed in only two years, bringing spectacular change and transforming the impression of Ypsilanti gained by those who looked out from windows of passing trains. The imagination and work it had taken to relocate the stockyards and oil tanks and replace them with gardens paid off in a greatly enhanced city image. In fact, both the train station gardens, and other gardens around the city, were not only a constant source of delight for Ypsilanti residents, but so beautiful that people actually came from outside the city to experience them. In a newspaper article from 1892, we read about one such garden: “The garden is now in its glory and the brightest beauty spot between Sandy Hook and the Golden Horn – between Portland on the east and Portland on the west…. It has undoubtedly done more to spread the fame and brighten the name of Ypsilanti in the minds of people who know us not, than any other institution here.”

Maintenance of the gardens and grounds was entrusted to a genius with plants, John Laidlaw, a native of Scotland who had been an experienced gardener for 24 years. Laidlaw was hired officially as “Superintendent of Landscape Gardening, for the Michigan Central Rail Road.” He was responsible not only for planning, planting and supervising the gardens at the Ypsilanti railroad yards, but at yards all along the rail line and at other stations as well.

In a newspaper article from July 27, 1899, there is speculation about the theme of the Ypsilanti gardens for that year. “There has been much query as to what was to be the great feature of the Michigan Central depot garden this year,” we read. “Owing to the fact that twenty-seven other depot gardens are supplied from the Central’s greenhouse at Ypsilanti under Mr. Laidlaw’s direction, the work here has been somewhat delayed. This year Lansing, Bay City, and Mackinac have been added to the list of towns supplied from here. But from the present activity at the gardens, it is evident that Mr. Laidlaw is again surpassing all his previous achievements and that the Michigan Central gardens at Ypsilanti will again become the eagerly watched for spot on the Detroit and Chicago line of the road.”

The gardens for the year 1897 were described in an article from the weekly newspaper The Ypsilantian: “Lovers of the beautiful should not delay to visit the Michigan Central depot garden which is now at its loveliest. South of the baggage room is a beautiful specimen of carpet bedding, geometrical designs worked out in different colored coleus and achyranthes, with alyssum for contrast. This however, is but an earnest of the beauty to be found north of the passenger station. Here the velvety green of the lawn forms a perfect setting for the handsome display of foliage and flower. The paths are outlined by graceful sweeps of foliage plants and alyssum. The eye is first caught by the beautiful bed devoted to the emblems of the Mystic Shriners. The bed slopes gently backward and the figures stand out with great distinctness…. A little further on is the famous Liberty Bell, flanked by cannon and crossed muskets. This is the design which seems to strike a responsive chord in the heart of every traveler, if one may judge from the enthusiastic remarks overheard on trains. The bell itself is seven feet across the mouth and 6 feet 9 inches in length. This design contains 17,000 plants…. At the right near the water tank is Mr. Laidlaw’s leading design for the season – the Log Cabin, the old fashioned well sweep and curb with the old bucket resting thereon, and on the other side of the cabin, the familiar soap-kettle with a fire made of achyranthes underneath.”
As if the magnificent flower gardens were not enough to make a positive impression on those from out of town, the station manager, Mr. Brazil M. Damon, had still another brilliant marketing ploy to convince railroad passengers that Ypsilanti was a pleasant and beautiful place to either visit or pass through. That ploy was the world- famous Ypsilanti Flower Girls -- who were tasked with distributing flowers to passengers on arriving New York Central trains.

One of the original Flower Girls was Jessie Swaine, who lived at the corner of East Forest and North River Street, just two blocks from the train station. She gives us more information about her duties in an oral history recorded in January, 1965, when she was in her eighties, and in a newspaper article from the 1920s.

According to Jessie Swaine, Mr. Damon’s older daughter, Avonia, was responsible for purchasing the flowers, which she arranged into small bouquets containing three or four flowers each. Some of the flowers were grown in the greenhouse near the train station, and others were obtained from ladies in Ypsilanti for one cent a bunch.

Jessie Swaine and the station master’s younger daughter, Lillian Damon, would be ready to distribute the flowers when New York Central passenger trains stopped in Ypsilanti three or four times a day. To perform their task, the Flower Girls were excused from school an hour each morning. Miss Swaine explained: “I would start at one end of the train and Lillian Damon, the daughter of the yard-master, would start at the other end. We would get on three or four trains a day. The engineer would give us a special whistle to make sure we were off the train before it started again.”

Miss Swaine told how the women passengers were impressed and delighted with this gesture. “Sometimes,” she says, “even the men would ask us for flowers. They said that the bouquets looked so very pretty. And if we had enough extra bouquets, we would occasionally give some to the men.” For their efforts, the Flower Girls were each paid 15 cents a day. Eventually, Jessie Swaine replaced the duties of Avonia, and was paid 75 cents a day for purchasing and arranging the flowers.

Nearly everyone in Ypsilanti has seen the picture of the Train Flower Girls in the station gardens. Miss Swaine describes the day that picture was taken -- in August, 1892. The two girls are wearing their Flower Girl uniforms, which Miss Swaine describes as dark blue, with white bands on the hem and sleeves, and sailor hats. Her father, Frederick Swaine, a maltster, is on the right, and Mr. Damon, the station master, on the left. Miss Swaine notes that her father just happened to be waiting for the train to Ann Arbor the day the photographer was there to take her and Lillian’s photograph in the gardens. In the oral-history interview, she proudly relates that the story of the Ypsilanti gardens and the Train Flower Girls was even written about in the London Times. Her father had spent his youth in London, before immigrating to Ypsilanti in the early 1870’s, so Ms. Swaine found the story in the Times a particular source of pride.

The magnificent flower gardens at the Ypsilanti train station seem to have disappeared as still another victim of the Great Depression. Today, they exist only in browning remnants of the printed word, in a few old photographs, and perhaps in the memory of a few very old people.

Today, too, the pre-gardens blight of 120 years ago has returned in the form of the abandoned train station and crumbling Thompson Block that meet the eyes of train passengers who pass through our town on the Amtrak. We can only hope that, like the enlightened citizens and business people in the Ypsilanti of 1890, visionaries in our own day will find ways to make Ypsilanti a showcase of beauty and delight. Once more, the obvious starting point is the train station area, where both the boarded-up station and Thompson Block building cry out for renovation and reintegration into the city’s life. For those of us who live on North River Street, “hope springs eternal” that the flowers will bloom again.

(Janice Anschuetz lives with her husband in the Swaine House and spends time with her gardens and restoration. She loves history and stories about people in their time in history, and has a double major in history and sociology from Eastern Michigan University and a MSW in social work from The University of Michigan. She is currently researching and writing her third book - a history of one of her ancestors and their role in the shaping of England and America.)

Photo 1: A view of the area around the Ypsilanti Michigan Central train station in the 1870s.

Photo 3: One of the featured plantings in the Michigan Central gardens was the Liberty Bell.

Photo 4: In 1899 the featured planting in the gardens was a log house.

Photo 5: The Ypsilanti flower girls. At the left is the station master, Brazil Damon, in the center is Jessie Swaine (on the left) and Lillian Damon, and on the right is Fred Swaine.