Enthusiasm Of Gardeners Increases As Talk By Dr. Hugh Findlay Draws Near - Many From Other Cities Inquire About Meeting 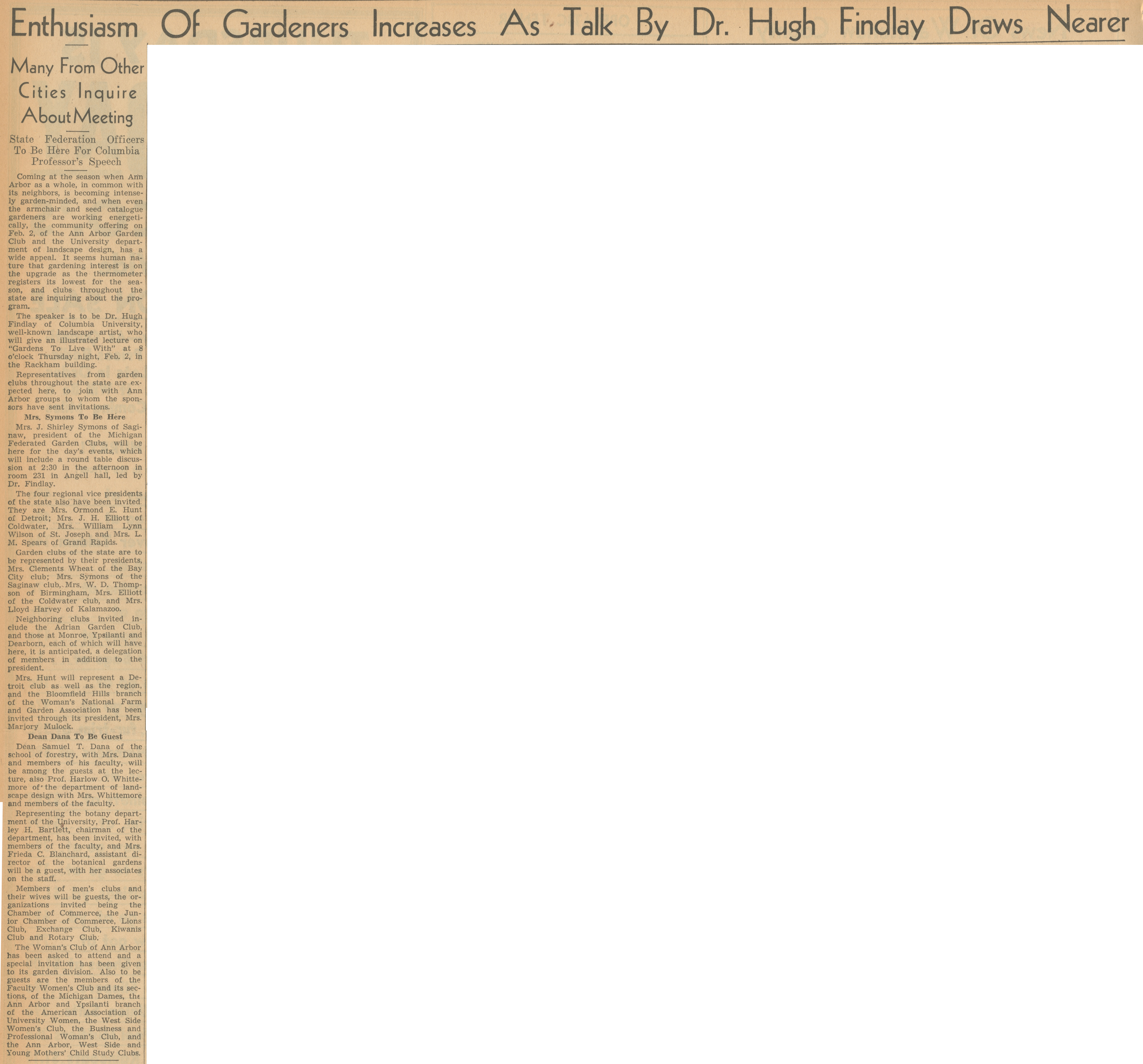 Many From Other Cities Inquire About Meeting

State Federation Officers To Be Here For Columbia Professor’s Speech

Coming at the season when Ann Arbor as a whole, in common with its neighbors, is becoming intensely garden-minded, and when even the armchair and seed catalogue gardeners are working energetically, the community offering on Feb. 2, of the Ann Arbor Garden Club and the University department of landscape design, has a wide appeal. It seems human nature that gardening interest is on the upgrade as the thermometer registers its lowest for the season, and clubs throughout the state are inquiring about the program.

The speaker is to be Dr. Hugh Findlay of Columbia University, well-known landscape artist, who will give an illustrated lecture on “Gardens To Live With” at 8 o’clock Thursday night, Feb. 2, in the Rackham building.

Representatives from garden clubs throughout the state are expected here, to join with Ann Arbor groups to whom the sponsors have sent invitations.

Mrs. Symons To Be Here

Mrs. J. Shirley Symons of Saginaw, president of the Michigan Federated Garden Clubs, will be here for the day’s events, which will include a round table discussion at 2:30 in the afternoon in room 231 in Angell hall, led by Dr. Findlay.

Garden clubs of the state are to be represented by their presidents, Mrs. Clements Wheat of the Bay City club; Mrs. Symons of the Saginaw club,. Mrs. W. D. Thompson of Birmingham, Mrs. Elliott of the Coldwater club, and Mrs. Lloyd Harvey of Kalamazoo.

Neighboring clubs invited include the Adrian Garden Club, and those at Monroe, Ypsilanti and Dearborn, each of which will have here, it is anticipated, a delegation of members in addition to the president.

Mrs. Hunt will represent a Detroit club as well as the region, and the Bloomfield Hills branch of the Woman’s National Farm and Garden Association has been invited through its president, Mrs. Marjory Mulock.

Dean Dana To Be Guest

Representing the botany department of the University, Prof. Harley H. Bartlett, chairman of the department, has been invited, with members of the faculty, and Mrs. Frieda C. Blanchard, assistant director of the botanical gardens will be a guest, with her associates on the staff.

The Woman’s Club of Ann Arbor has been asked to attend and a special invitation has been given to its garden division. Also to be guests are the members of the Faculty Women’s Club and its sections, of the Michigan Dames, the Ann Arbor and Ypsilanti branch of the American Association of University Women, the West Side Women’s Club, the Business and Professional Woman’s Club, and the Ann Arbor, West Side and Young Mothers’ Child Study Clubs.