Sir Robert And Lady Mayer In City In Interest Of Save The Children Federation: Justice Bushnell Presides At Dinner 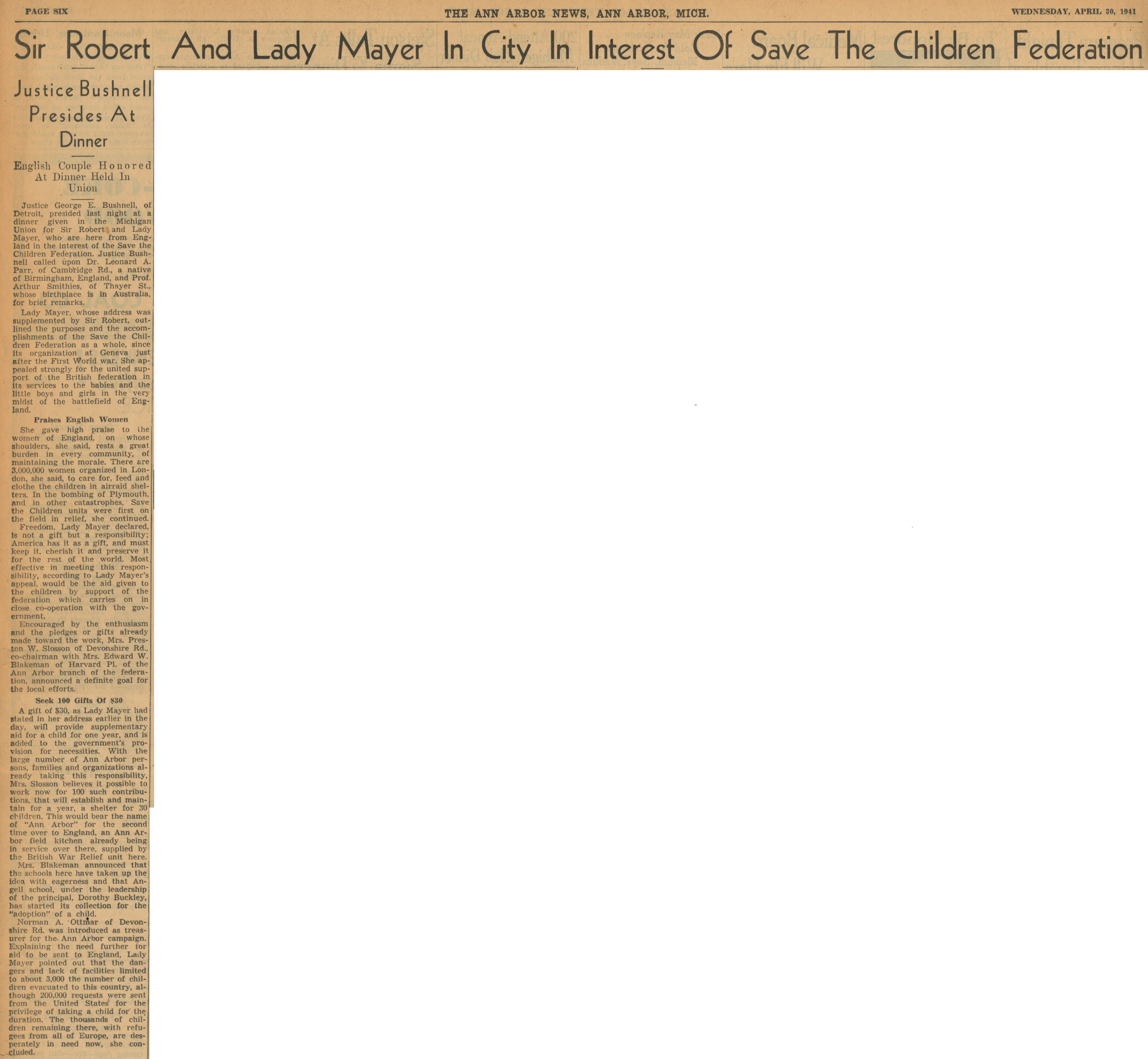 Justice George E. Bushnell, of Detroit, presided last night at a dinner given in the Michigan Union for Sir Robert and Lady Mayer, who are here from England in the interest of the Save the Children Federation. Justice Bushnell called upon Dr. Leonard A. Parr, of Cambridge Rd., a native of Birmingham, England, and Prof. Arthur Smithies, of Thayer St., whose birthplace is in Australia, for brief remarks.

Lady Mayer, whose address was supplemented by Sir Robert, outlined the purposes and the accomplishments of the Save the Children Federation as a whole, since its organization at Geneva just after the First World war. She appealed strongly for the united support of the British federation in its services to the babies and the little boys and girls in the very midst of the battlefield of England.

She gave high praise to the women of England, on whose shoulders, she said, rests a great burden in every community, of maintaining the morale. There are 3,000,000 women organized in London, she said, to care for, feed and clothe the children in airraid shelters. In the bombing of Plymouth, and in other catastrophes, Save the Children units were first on the field in relief, she continued.

Freedom, Lady Mayer declared, is not a gift but a responsibility; America has it as a gift, and must keep it, cherish it and preserve it for the rest of the world. Most effective in meeting this responsibility, according to Lady Mayer's appeal, would be the aid given to the children by support of the federation which carries on in close co-operation with the government.

Encouraged by the enthusiasm and the pledges or gifts already made toward the work, Mrs. Preston W. Slosson of Devonshire Rd., co-chairman with Mrs. Edward W. Blakeman of Harvard PI. of the Ann Arbor branch of the federation, announced a definite goal for the local efforts.

A gift of $30, as Lady Mayer had stated in her address earlier in the day, will provide supplementary aid for a child for one year, and is added to the government’s provision for necessities. With the large number of Ann Arbor persons, families and organizations already taking this responsibility, Mrs. Slosson believes it possible to work now for 100 such contributions, that will establish and maintain for a year, a shelter for 30 children. This would bear the name of "Ann Arbor" for the second time over to England, an Ann Arbor field kitchen already being in service over there, supplied by the British War Relief unit here.

Mrs. Blakeman announced that the schools here have taken up the idea with eagerness and that Angell school, under the leadership of the principal, Dorothy Buckley, has started its collection for the “adoption" of a child.

Norman A. Ottmar of Devonshire Rd. was introduced as treasurer for the Ann Arbor campaign. Explaining the need further for aid to be sent to England, Lady Mayer pointed out that the dangers and lack of facilities limited to about 3,000 the number of children evacuated to this country, although 200,000 requests were sent from the United Stated for the privilege of taking a child for the duration. The thousands of children remaining there, with refugees from all of Europe, are desperately in need now, she concluded.