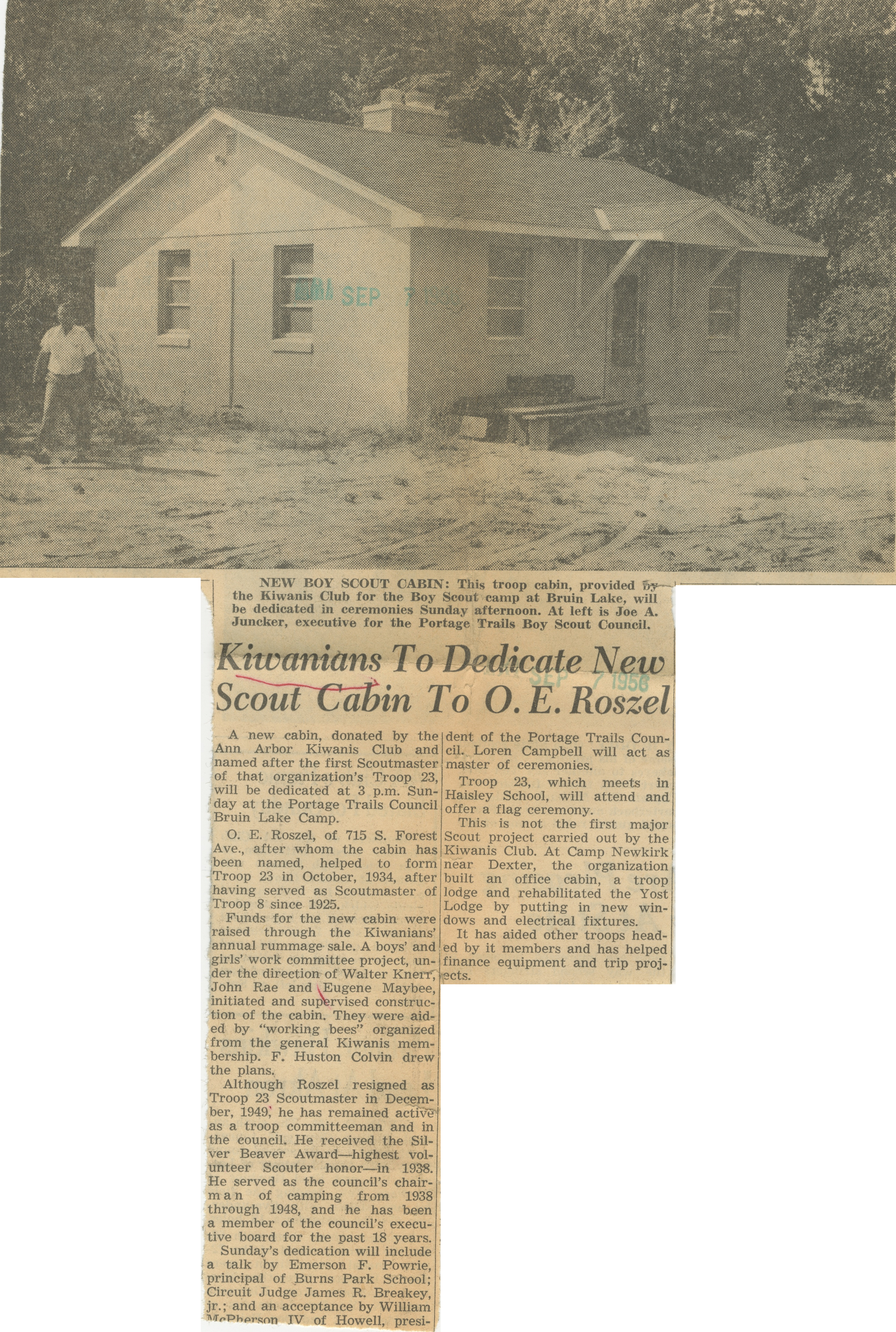 NEW BOY SCOUT CABIN: This troop cabin, provided by the Kiwanis Club for the Boy Scout camp at Bruin Lake, will be dedicated in ceremonies Sunday afternoon. At left is Joe A. Juncker, executive for the Portage Trails Boy Scout Council.

A new cabin, donated by the Ann Arbor Kiwanis Club and named after the first Scoutmaster of that organization’s Troop 23, will be dedicated at 3 p.m. Sunday at the Portage Trails Council Bruin Lake Camp.

Funds for the new cabin were raised through the Kiwanians’ annual rummage sale. A boys' and girls’ work committee project, under the direction of Walter Knerr, John Rae and Eugene Maybee, initiated and supervised construction of the cabin. They were aided by “working bees” organized from the general Kiwanis membership. F. Huston Colvin drew the plans.

Although Roszel resigned as Troop 23 Scoutmaster in December, 1949, he has remained as a troop committeeman and in the council. He received the Silver Beaver Award—highest volunteer Scouter honor—in 1938. He served as the council’s chairman of camping from 1938 through 1948, and he has been a member of the council’s executive board for the past 18 years.

Sunday’s dedication will include a talk by Emerson F. Powrie, principal of Burns Park School; Circuit Judge James R. Breakey, jr., and an acceptance by William McPherson IV of Howell, president of the Portage Trails Council. Loren Campbell will act as master of ceremonies.

Troop 23, which meets at Haisley School, will attend and offer a flag ceremony.

This is not the first major Scout project carried out by the Kiwanis Club. At Camp Newkirk near Dexter, the organization built an office cabin, a troop lodge and rehabilitated the Yost Lodge by putting in new windows and electrical fixtures.

It has aided other troops headed by it members and has helped finance equipment and trip projects.