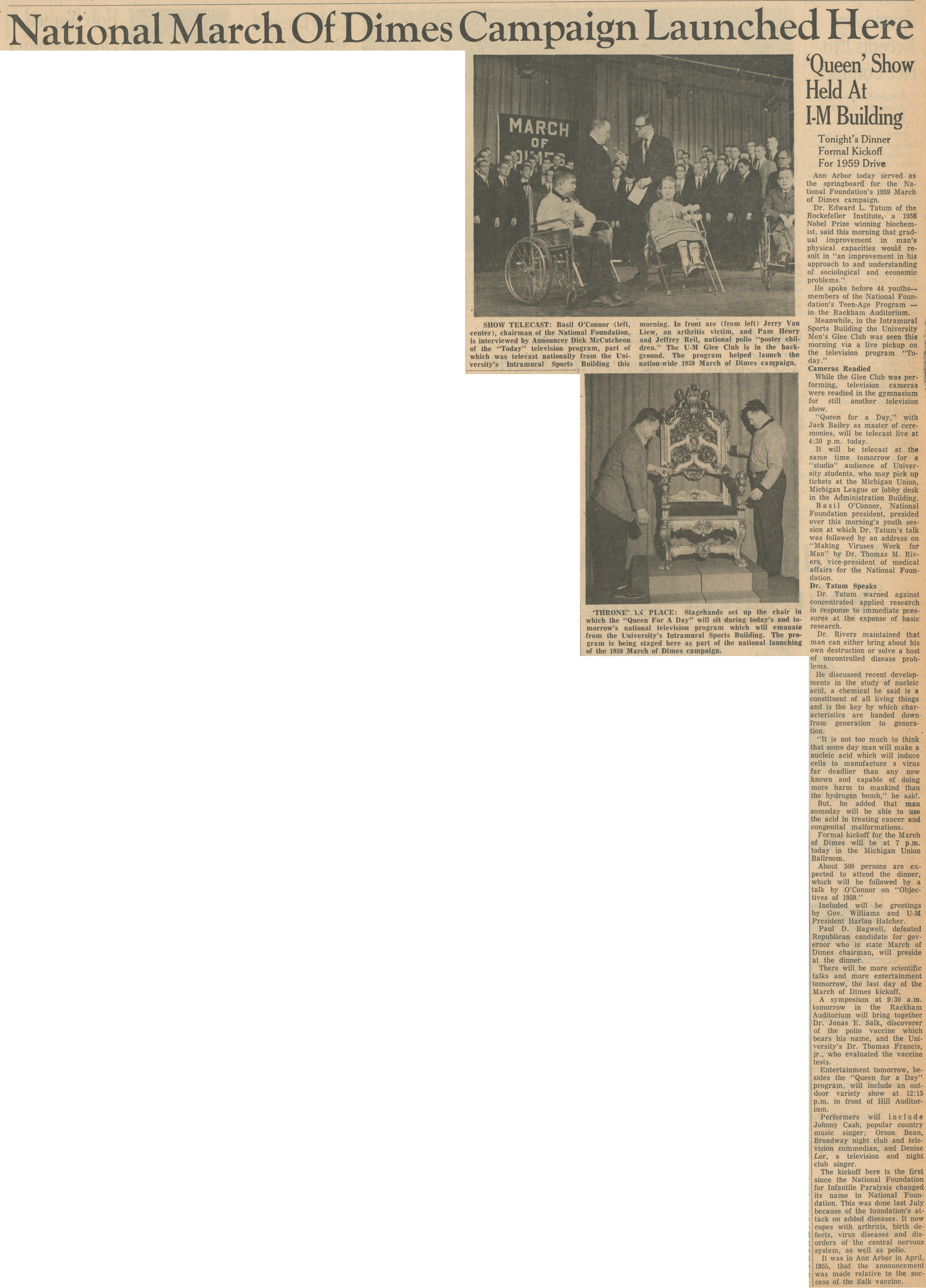 Ann Arbor today served as the springboard for the National Foundation’s 1959 March of Dimes campaign.

Dr. Edward L. Tatum of the Rockefeller Institute, a 1958 Nobel Prize winning biochemist, said this morning that gradual improvement in man’s physical capacities would result in “an improvement in his approach to and understanding of sociological and economic problems."

He spoke before 44 youths — members of the National Foundation’s Teen-Age Program — in the Rackham Auditorium.

Meanwhile, in the Intramural Sports Building the University Men’s Glee Club was seen this morning via a live pickup on the television program “Today.”

While the Glee Club was performing, television cameras were readied in the gymnasium for still another television show.

“Queen for a Day,” with Jack Bailey as master of ceremonies, will be telecast live at 4:30 p.m. today.

It will be telecast at the same time tomorrow for a “studio” audience of University students, who may pick up tickets at the Michigan Union, Michigan League or lobby desk in the Administration Building.

Basil O’Connor, National Foundation president, presided over this morning’s youth session at which Dr. Tatum’s talk was followed by an address on “Making Viruses Work for Man” by Dr. Thomas M. Rivers, vice-president of medical affairs for the National Foundation.

Dr. Tatum warned against concentrated applied research in response to immediate pressures at the expense of basic research.

Dr. Rivers maintained that man can either bring about his own destruction or solve a host of uncontrolled disease problems.

He discussed recent developments in the study of nucleic acid, a chemical he said is a constituent of all living things and is the key by which characteristics are handed down generation to generation.

"It is not too much to think that some day man will make a nucleic acid which will induce cells to manufacture a virus far deadlier than any now known and capable of doing more harm to mankind than the hydrogen bomb,” he said.

But, he added that man someday will be able to use the acid in treating cancer and congenital malformations.

Formal kickoff for the March of Dimes will be at 7 p.m. today in the Michigan Union Ballroom.

About 500 persons are expected to attend the dinner, which will be followed by a talk by O’Connor on “Objectives of 1959.”

Included will be greetings by Gov. Williams and U-M President Harlan Hatcher.

Paul D. Bagwell, defeated Republican candidate for governor who is state March of Dimes chairman, will preside at the dinner.

There will be more scientific talks and more entertainment tomorrow, the last day of the March of Dimes kickoff.

A symposium at 9:30 a.m. tomorrow in the Rackham Auditorium will bring together Dr. Jonas E. Salk, discoverer of the polio vaccine which bears his name, and the University’s Dr. Thomas Francis, jr., who evaluated the vaccine tests.

Entertainment tomorrow, besides the “Queen for a Day” program, will include an outdoor variety show at 12:15 p.m. in front of Hill Auditorium.

The kickoff here is the first since the National Foundation for Infantile Paralysis changed its name to National Foundation. This was done last July because of the foundation’s attack on added diseases. It now copes with arthritis, birth defects, virus diseases and disorders of the central nervous system, as well as polio.

It was in Ann Arbor in April, 1955, that the announcement was made relative to the success of the Salk vaccine.

SHOW TELECAST: Basil O’Connor (left, center), chairman of the National Foundation, is interviewed by Announcer Dick McCutcheon of the “Today” television program, part of which was telecast nationally from the University's Intramural Sports Building this morning. In front are (from left) Jerry Van Liew, an arthritis victim, and Pam Henry and Jeffrey Reil, national polio "poster children." The U-M Glee Club is in the background. the program helped launch the nation-wide 1959 March of Dimes campaign.

‘THRONE’ IN PLACE: Stagehands set up the chair in which the “Queen For A Day” will sit during today’s and tomorrow’s national television program which will emanate from the University’s Intramural Sports Building. The program is being staged here as part of the national launching of the 1959 March of Dimes campaign.