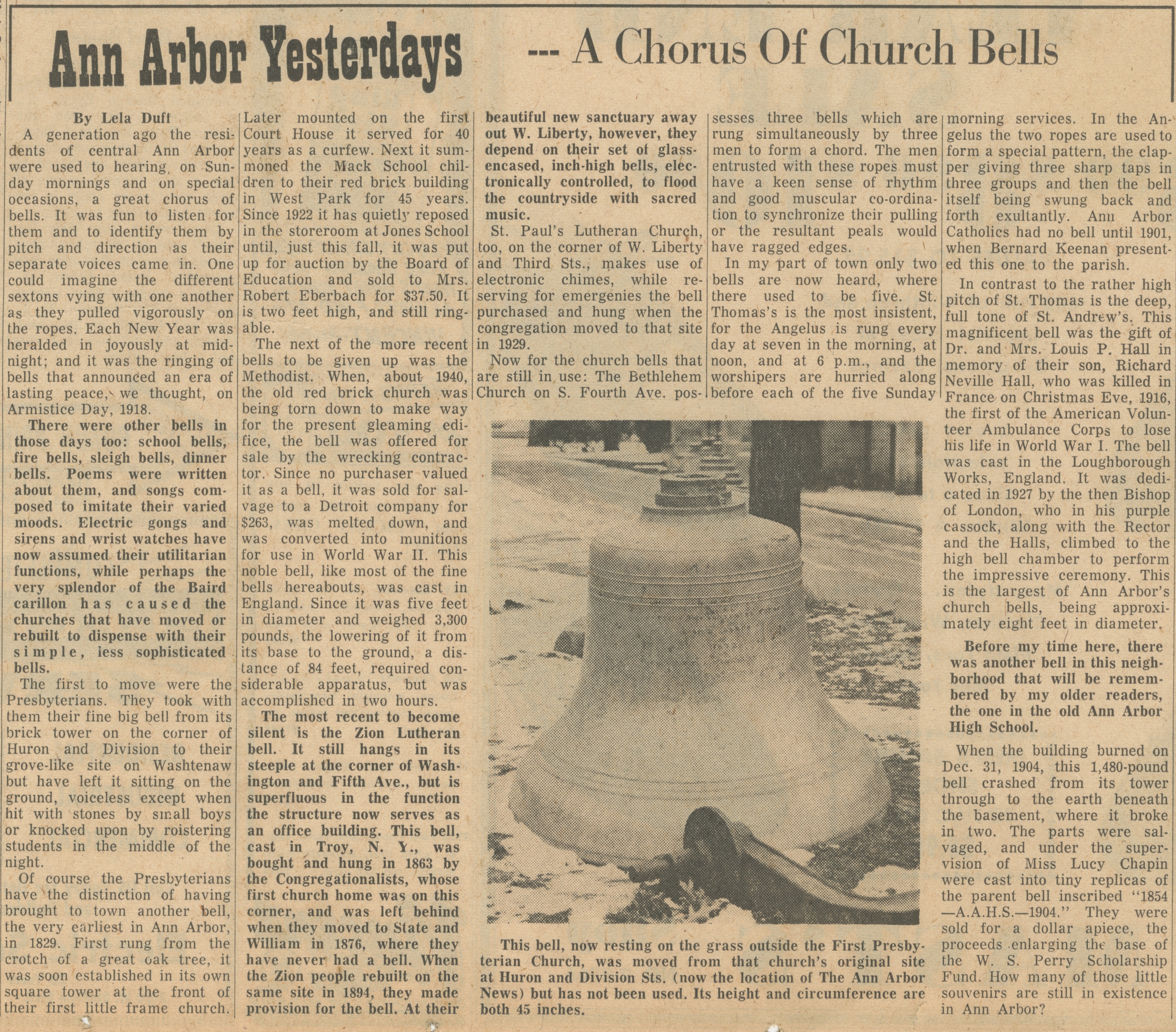 A generation ago the residents of central Ann Arbor were used to hearing, on Sunday mornings and on special occasions, a great chorus of bells. It was fun to listen for them and to identify them by pitch and direction as their separate voices came in. One could imagine the different sextons vying with one another as they pulled vigorously on the ropes. Each New Year was heralded in joyously at midnight; and it was the ringing of bells that announced an era of lasting peace,' we thought, on Armistice Day, 1918.

There were other bells in those days too: school bells, fire bells, sleigh bells, dinner bells. Poems were written about them, and songs composed to imitate their varied moods. Electric gongs and sirens and wrist watches have now assumed their utilitarian functions, while perhaps the very splendor of the Baird carillon has caused the churches that have moved or rebuilt to dispense with their simple, less sophisticated bells.

The first to move were the Presbyterians. They took with them their fine big bell from its brick tower on the corner of Huron and Division to their grove-like site on Washtenaw but have left it sitting on the ground, voiceless except when hit with stones by small boys or knocked upon by roistering students in the middle of the night.

Of course the Presbyterians have the distinction of having brought to town another bell, the very earliest in Ann Arbor, in 1829. First rung from the crotch of a great oak tree, it was soon established in its own square tower at the front of their first little frame church.

Later mounted on the first Court House it served for 40 years as a curfew. Next it summoned the Mack School children to their red brick building in West Park for 45 years. Since 1922 it has quietly reposed in the storeroom at Jones School until, just this fall, it was put up for auction by the Board of Education and sold to Mrs. Robert Eberbach for $37.50. It is two feet high, and still ringable.

The next of the more recent bells to be given up was the Methodist. When, about 1940, the old red brick church was being torn down to make way for the present gleaming edifice, the bell was offered for sale by the wrecking contractor. Since no purchaser valued it as a bell, it was sold for salvage to a Detroit company for $263, was melted down, and was converted into munitions for use in World War II. This noble bell, like most of the fine bells hereabouts, was cast in England. Since it was five feet in diameter and weighed 3,300 pounds, the lowering of it from its base to the ground, a distance of 84 feet, required considerable apparatus, but was accomplished in two hours.

The most recent to become silent is the Zion Lutheran bell. It still hangs in its steeple at the corner of Washington and Fifth Ave., but is superfluous in the function the structure now serves as an office building. This bell, cast in Troy, N. Y., was bought and hung in 1863 by the Congregationalists, whose first church home was on this corner, and was left behind when they moved to State and William in 1876, where they have never had a bell. When the Zion people rebuilt on the same site in 1894, they made provision for the bell. At their beautiful new sanctuary away out W. Liberty, however, they depend on their set on glass-encased, inch-high bells, electronically controlled, to flood the countryside with sacred music.

St. Paul’s Lutheran Church, too, on the corner of W. Liberty and Third Sts., makes use of electronic chimes, while reserving for emergencies the bell purchased and hung when the congregation moved to that site in 1929.

Now for the church bells that are still in.use: The Bethlehem Church on S. Fourth Ave. possesses three bells which are rung simultaneously by three men to form a chord. The men entrusted with these ropes must have a keen sense of rhythm and good muscular co-ordination to synchronize their pulling or the resultant peals would have ragged edges.

In my part of town only two bells are now heard, where there used to be five. St. Thomas's is the most insistent, for the Angelus is rung every day at seven in the morning, at noon, and at 6 p.m., and the worshipers are hurried along before each of the five Sunday morning services. In the Angelus the two ropes are used to form a special pattern, the clapper giving three sharp taps in three groups and then the bell itself being swung back and forth exultantly. Ann Arbor Catholics had no bell until 1901, when Bernard Keenan presented this one to the parish.

In contrast to the rather high pitch of St. Thomas is the deep, full tone of St. Andrew's. This magnificent bell was the gift of Dr. and Mrs. Louis P. Hall in memory of their son, Richard Neville Hall, who was killed in France on Christmas Eve, 1916, the first of the American Volunteer Ambulance Corps to lose his life in World War I. The bell was cast in the Loughborough Works, England. It was dedicated in 1927 by the then Bishop of London, who in his purple cassock, along with the Rector and the Halls, climbed to the high bell chamber to perform the impressive ceremony. This is the largest of Ann Arbor's church bells, being approximately eight feet in diameter.

Before my time here, there was another bell in this neighborhood that will be remembered by my older readers, the one in the old Ann Arbor High School.

When the building burned on Dec. 31, 1904, this 1,480-pound bell crashed from its tower through to the earth beneath the basement, where it broke in two. The parts were salvaged, and under the supervision of Miss Lucy Chapin were cast into tiny replicas of the parent bell inscribed "1854 —A.A.H.S.—1904.” They were sold for a dollar apiece, the proceeds enlarging the base of the W. S. Perry Scholarship Fund. How many of those little souvenirs are still in existence in Ann Arbor?

This bell, now resting on the grass outside the First Presbyterian Church, was moved from that church's original site at Huron and Division Sts. (now the location of The Ann Arbor News) but has not been used. Its height and circumference are both 45 inches.