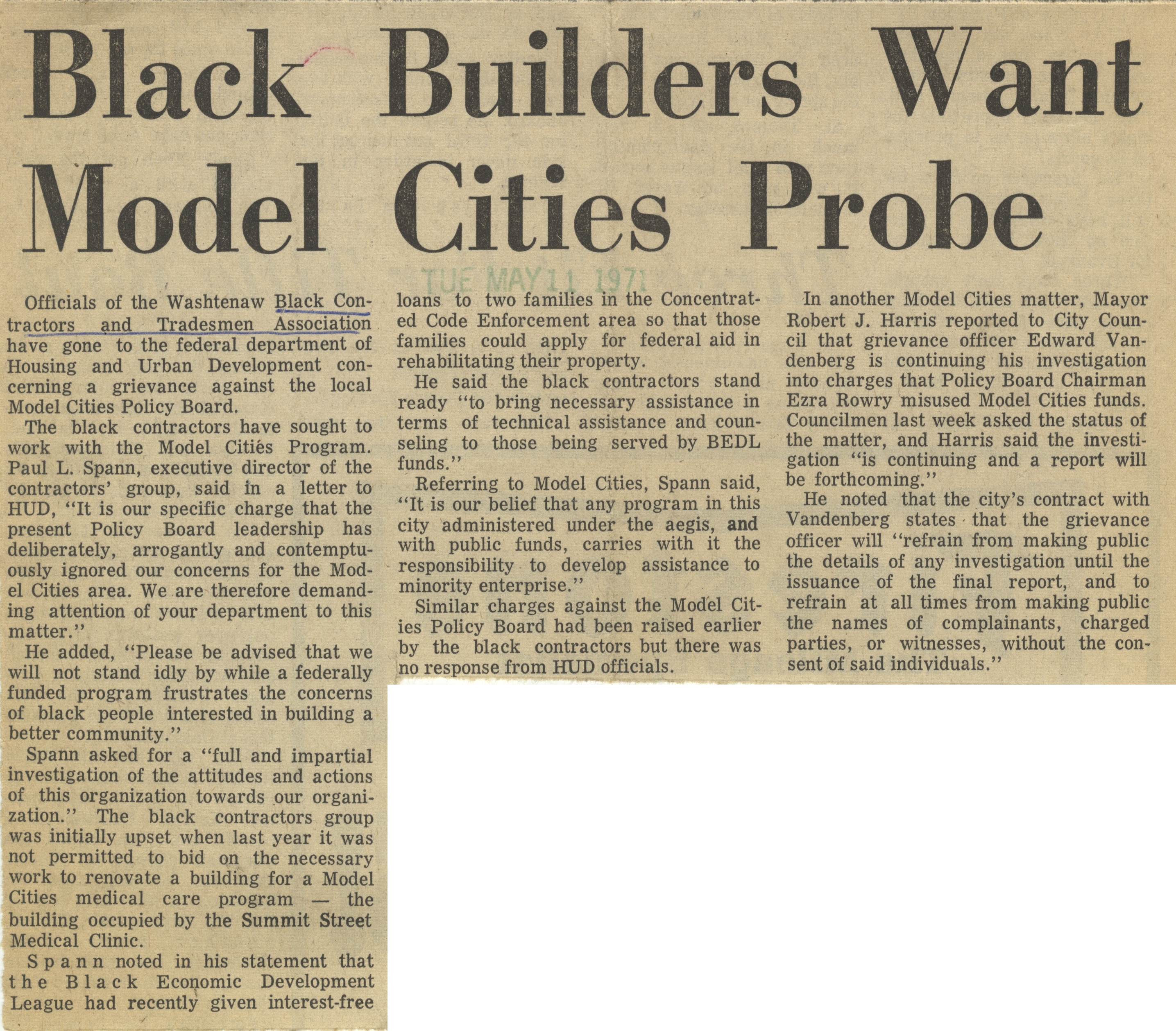 Officials of the Washtenaw Black Contractors and Tradesmen Association have gone to the federal department of Housing and Urban Development concerning a grievance against the local Model Cities Policy Board.

The black contractors have sought to work with the Model Cities Program. Paul L. Spann, executive director of the contractors’ group, said in a letter to HUD, “It is our specific charge that the present Policy Board leadership has deliberately, arrogantly and contemptuously ignored our concerns for the Model Cities area. We are therefore demanding attention of your department to this matter.”

He added, “Please be advised that we will not stand idly by while a federally funded program frustrates the concerns of black people interested in building a better community.”

Spann asked for a “full and impartial investigation of the attitudes and actions of this organization towards our organization.” The black contractors group was initially upset when last year it was not permitted to bid on the necessary work to renovate a building for a Model Cities medical care program — the building occupied by the Summit Street Medical Clinic.

Spann noted in his statement that the Black Economic Development League had recently given interest-free loans to two families in the Concentrated Code Enforcement area so that those families could apply for federal aid in rehabilitating their property.

He said the black contractors stand ready “to bring necessary assistance in terms of technical assistance and counseling to those being served by BEDL funds.”

Referring to Model Cities, Spann said, “It is our belief that any program in this city administered under the aegis, and with public funds, carries with it the responsibility to develop assistance to minority enterprise.”

Similar charges against the Model Cities Policy Board had been raised earlier by the black contractors but there was no response from HUD officials.

In another Model Cities matter, Mayor Robert J. Harris reported to City Council that grievance officer Edward Vandenberg is continuing his investigation into charges that Policy Board Chairman Ezra Rowry misused Model Cities funds. Councilmen last week asked the status of the matter, and Harris said the investigation “is continuing and a report will be forthcoming.”

He noted that the city’s contract with Vandenberg states - that the grievance officer will “refrain from making public the details of any investigation until the issuance of the final report, and to refrain at all times from making public the names of complainants, charged parties, or witnesses, without the consent of said individuals.”