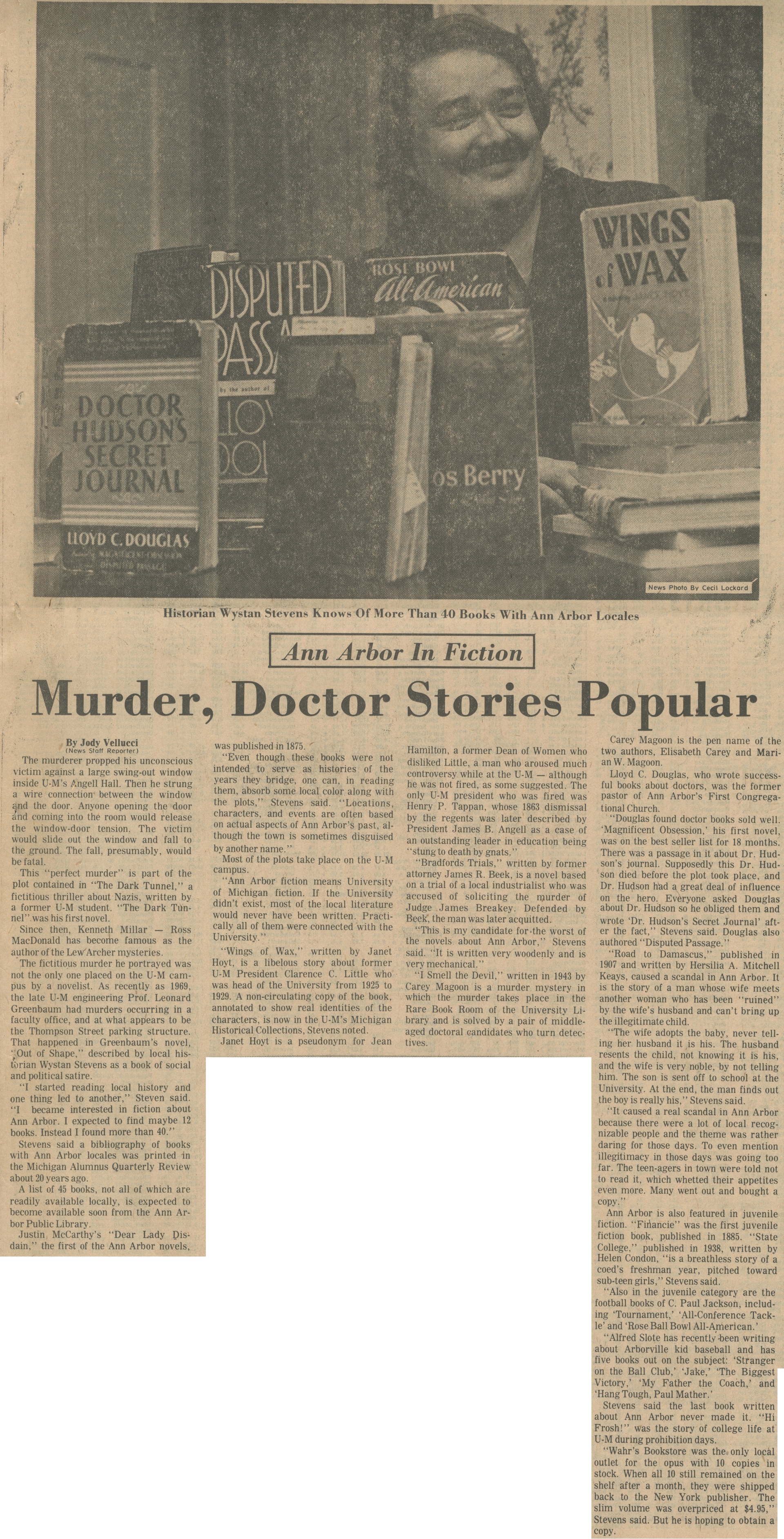 The murderer propped his unconscious victim against a large swing-out window inside U-M's Angell Hall. Then he strung a wire connection between the window and the door. Anyone opening the door and coming into the room would release the window-door tensions. The victim would slide out of the window and fall to the ground. The fall, presumably, would be fatal.

This "perfect murder" is part of the plot contained in "The Dark Tunnel," a fictitious thriller about Nazis, written by a former U-M student. "The Dark Tunnel" was his first novel.

Since then, Kenneth Millar - Ross MacDonald has become famous as the author of the Lew Archer mysteries.

The fictitious murder he portrayed was not the only one placed on the U-M campus by a novelist. As recently as 1969, the late U-M engineering Prof. Leonard Greebaum, had murders occurring in a faculty office, and at what appears to be the Thompson Street parking structure. That happened in Greenbaum's novel, "Out of Shape," described by local historian Wystan Stevens as a book of social and political satire.

"I started reading local history and one thing led to another," Steven said. "I became interested in fiction about Ann Arbor. I expected to find maybe 12 books. Instead I found more than 40."

Stevens said a bibliography of books with Ann Arbor locales was printed in the Michigan Alumnus Quarterly Review about 20 years ago.

A list of 45 books, not all of which are readily available locally, is expected to become available soon from the Ann Arbor Public Library.

Justin McCarthy's "Dear Lady Disdain," the first of the Ann Arbor novels, was published in 1875.

"Even though these books were not intended to serve as histories of the years they bridge, one can, in reading them, absorb some local color along with the plots," Stevens said. "Locations, characters, and events are often based on actual aspects of Ann Arbor's past, although the town is sometimes disguised by another name."

Most of the plots take place on the U-M campus.

"Ann Arbor fiction means University of Michigan fiction. If the University didn't exist, most of the local literature would never have been written. Practically all of them were connected with the University."

"Wings of Wax," written by Janet Hoyt, is libelous story about former U-M President Clarence C. Little who was head of the University from 1925 to 1929. A non-circulating copy of the book, annotated to show real identities of the characters, is now in the U-M's Michigan Historical Collections, Stevens noted.

Janet Hoyt is a pseudonym for Jean Hamilton, a former Dean of Women who disliked Little, a man who aroused much controversy while at the U-M - although he was not fired, as some suggested. The only U-M president who was fired was Henry P. Tappan, whose 1863 dismissal by the regents was later described by President James B. Angell as a case of an outstanding leader in education being "stung to death by gnats."

"Badfords Trials," written by former attorney James R. Beek, is a novel based on a trial of a local industrialist who was accused of soliciting the murder of Judge James Breakey. Defended by Beek, the man was later acquitted.

"This is my candidate for the worst of the novels about Ann Arbor," Stevens said. "It is written very woodenly and is very mechanical."

"I Smell the Devil," written in 1943 by Carey Magoon is a murder mystery in which the murder takes place in the Rare Book Room of the University Library and is solved by a pair of middle-aged doctoral candidates who turn detectives.

"Douglas found doctor books sold well. 'Magnificent Obsession,' his first novel, was on the best seller list for 18 months. There was a passage in it about Dr. Hudson's journal. Supposedly, this Dr. Hudson died before the plot took place, and Dr. Hudson had a great deal of influence on the hero. Everyone asked Douglas about Dr. Hudson so he obliged them and wrote, 'Dr. Hudson's Secret Journal' after the fact," Stevens said. Douglas also authored "Disputed Passage."

"Road to Damascus," published in 1907 and written by Hersilia A. Mitchell Keays, caused a scandal in Ann Arbor. It is the story of a man whose wife meets another woman who has been "ruined" by the wife's husband and can't bring up the illegitimate child.

"The wife adopts the baby, never telling her husband it is his. The husband resents the child, not knowing it is his, and the wife is very noble, by not telling him. The son is sent off to school at the University. At the end, the man finds out the boy is really his," Stevens said.

"It caused a real scandal in Ann Arbor because there were a lot of local recognizable people and the theme was rather daring for those days. To even mention illegitimacy in those days was going too far. The teenagers in town were told not to read it, which whetted their appetites even more. Many went out and bought a copy."

"Alfred Slote has recently been writing about Arborville kid baseball and has five books out on the subject: 'Stranger on the Ball Club,' 'Jake,' 'The Biggest Victory,' 'My Father the Couch,' and 'Hang Tough, Paul Mather.'

Stevens said the last book written about Ann Arbor never made it. "Hi Frosh!" was the story of college life at U-M during prohibition days.

"Wahr's Bookstore was the only local outlet for the opus with 10 copies in stock. When all 10 still remained on the shelf after a month, they were shipped back to the New York publisher. The slim volume was overpriced at $4.95," Stevens said. But he is hoping to obtain a copy.