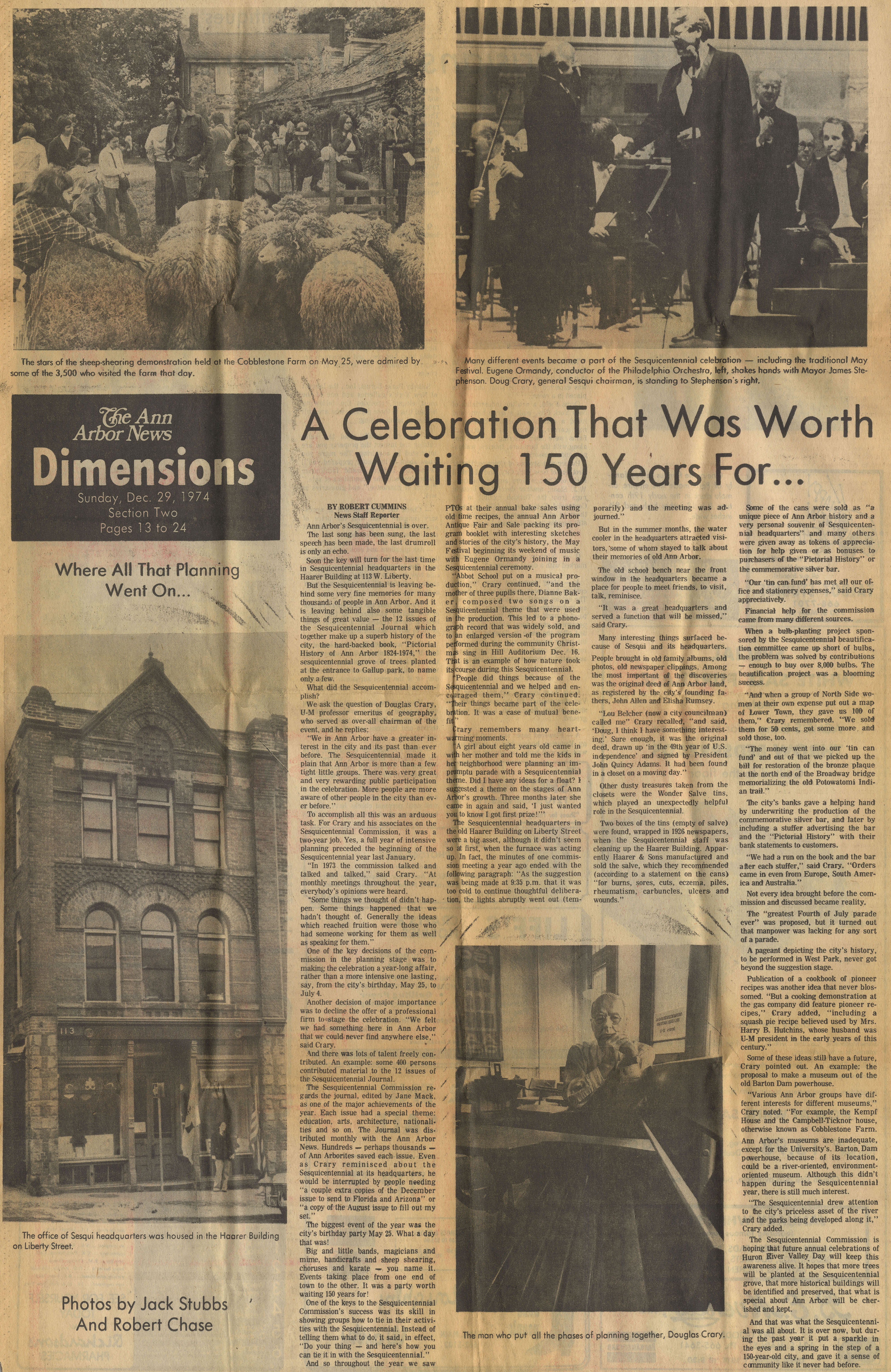 Where All That Planning Went On...

Ann Arbor's Sesquicentennial is over.

The last song has been sung, the last speech has been made, the last drumroll is only an echo.

Soon the key will turn for the last time in Sesquicentennial headquarters in the Haarer Building at 113 W. Liberty.

What did the Sesquicentennial accomplish?

We ask the question of Douglas Crary, U-M professor emeritus of geography, who served as over-all chairman of the event, and he replies:

"We in Ann Arbor have a greater interest in the city and its past than ever before.  The Sesquicentennial made it plain that Ann Arbor is more than a few tight little groups.  There was very great and very rewarding public participation in the celebration.  More people are more aware of other people in the city than ever before."

"Some things happened that we hadn't thought of.  Generally the ideas which reached fruition were those who had someone working for them as well as speaking for them."

One of the key decisions of the commission in the planning stage was to making the celebration a year-long affair, rather than a more intensive one lasting, say, from the city's birthday, May 25, to July 4.

Another decision of major importance was to decline the offer of a professional firm to stage the celebration.  "We felt we had something here in Ann Arbor that we could never find anywhere else," said Crary.

And there was lots of talent freely contributed.  An example: some 400 persons contributed material to the 12 issues of the Sesquicentennial Journal.

The Sesquicentennial Commission regards the journal, edited by Jane Mack, as one of the major achievements of the year.  Each issue had a special theme: education, arts, architecture, nationalities and so on.  The Journal was distributed monthly with the Ann Arbor News.  Hundreds- perhaps thousands- of Ann Arborites saved each issue.  Even as Crary reminisced about the Sesquicentennial at its headquarters, he would be interrupted by people needing "a couple extra copies of the December issue to send to Florida and Arizona" or "a copy of the August issue to fill out my set."

The biggest event of the year was the city's birthday party May 25.  What a day that was!

Big and little bands, magicians and mime, handicrafts and sheep shearing, choruses and karate- you name it.  Events taking place from one end of town to the other.  It was a party worth waiting 150 years for!

And so throughout the year we saw PTOs at their annual bake sales using old time recipes, the annual Ann Arbor Antique Fair and Sale packing its program booklet with interesting sketches and stories of the city's history, the May Festival beginning its weekend of music with Eugene Ormandy joining in a Sesquicentennial ceremony.

"Abbot School put on a musical production," Crary continued, "and the mother of three pupils there, Dianne Baker, composed two songs on a Sesquicentennial theme that were used in the production.  This led to a phonograph record that was widely sold, and to an enlarged version of the program performed during the community Christmas sing in Hill Auditorium Dec. 16.  That is an example of how nature took its course during this Sesquicentennial.

"People did things because of the Sesquicentennial and we helped and encouraged them," Crary continued.  "Their things became part of the celebration.  It was a case of mutual benefit."

"A girl about eight years old came in with her mother and told me the kids in her neighborhood were planning and impromptu parade with a Sesquicentennial theme.  Did I have any ideas for a float?  I suggested a theme on the stages of Ann Arbor's growth.  Three months later she came in again and said, 'I just wanted you to know I got first prize!'"

The Sesquicentennial headquarters in the old Haarer Building on Liberty Street were a big asset, although it didn't seem so at first, when the furnace was acting up.  In fact, the minutes of one commission meeting a year ago ended with the following paragraph: "As the suggestion was being made at 9:35 p.m. that it was too cold to continue thoughtful deliberation, the lights abruptly went out (temporarily) and the meeting was adjourned.

But in the summer months, the water cooler in the headquarters attracted visitors, some of whom stayed to talk about their memories of old Ann Arbor.

The old school bench near the front window in the headquarters became a place for people to meet friends, to visit, talk, reminisce.

"It was a great headquarters and served a function that will be missed," said Crary.

Many interesting things surfaced because of Sesqui and its headquarters.  People brought in old family albums, old photos, old newspaper clippings.  Among the most important of the discoveries was the original deed of Ann Arbor land, as registered by the city's founding fathers, John Allen and Elisha Rumsey.

"Lou Belcher (now a city councilman) called me" Crary recalled, "and said, 'Doug, I think I have something interesting.'  Sure enough it was the original deed, drawn up 'in the 49th year of U.S. independence' and signed by President John Quincy Adams.  It had been found in a closet on moving day."

Other dusty treasures taken from the closets were the Wonder Salve tins, which played an unexpectedly helpful role in the Sesquicentennial.

Two boxes of the tins (empty of salve) were found, wrapped in 1926 newspapers, when the Sesquicentennial staff was cleaning up the Haarer Building.  Apparently Haarer & Sons manufactured and sold the salve, which they recommended (according to the statement on the cans) "for burns, sores, cutes, eczema, piles, rheumatism, carbuncles, ulcers and wounds."

Some of the cans were sold as "a unique piece of Ann Arbor history and a very personal souvenir of Sesquicentennial headquarters" and many others were given away as tokens of appreciation for help given or as bonuses to purchasers of the "Pictoral History" or the commemorative silver bar.

"Our 'tin can fund' has met all our office and stationery expenses," said Crary appreciatively.

Financial help for the commission came from many difference sources.

When a bulb-planting project sponsored by the Sesquicentennial beautification committee came up short of bulbs, the problem was solved by contributions- enough to buy over 8,000 bulbs.  The beautification project was a blooming success.

"And when a group of North Side women at their own expense put out a map of Lower Town, they gave us 100 of them," Crary remembered.  "We sold them for 50 cents, got some more, and sold those too.

"The money went into our 'tin can fund' and out of that we picked up the bill for restoration of the bronze plaque at the north end of the Broadway bridge memorializing the old Potowatomi Indian trail."

The city's banks gave a helping hand by underwriting the production of the commemorative silver bar, and later by including a stuffer advertising the bar and the "Pictoral History" with their bank statements to customers.

"We had a run on the book and the bar after each stuffer," said Crary.  "Orders came in even from Europe, South America and Australia."

Not every idea brought before the commission and discussed became reality.

The "greatest Fourth of July parade ever" was proposed, but it turned out that manpower was lacking for any sort of a parade.

A pageant depicting the city's history, to be performed in West Park, never got beyond the suggestion stage.

Publication of a cookbook of pioneer recipes was another idea that never blossomed.  "But a cooking demonstration at the gas company did feature pioneer recipes," Crary added, including a squash pie recipe believed used by Mrs. Harry B. Hutchins, whose husband was U-M president in the early years of this century."

Some of these ideas still have a future, Crary pointed out.  An example: the proposal to make a museum out of the old Barton Dam powerhouse.

Ann Arbor's museums are inadequate, except for the University's.  Barton Dam powerhouse, because of its location, could be a river-oriented, environment-oriented museum.   Although this didn't happen during the Sesquicentennial year, there is still much interest.

"The Sesquicentennial drew attention to the city's priceless asset of the river and the parks being developed along it," Crary added.

The Sesquicentennial Commission is hoping that future annual celebrations of Huron River Valley Day will keep this awareness alive.  It hopes that more trees will be planted at the Sesquicentennial grove, that more historical buildings will be identified and preserved, that what is special about Ann Arbor will be cherished and kept.

And that was what the Sesquicentennial was all about.  It is over now, but during the past year it put a sparkle in the eyes and a spring in the step of a 150-year-old city, and gave it a sense of community like it never had before.

The stars of the sheep-shearing demonstration held at the Cobblestone Farm on May 25, were admired by some of the 3,500 who visited the farm that day.

Many different events became a part of the Sesquicentennial Celebration- including the traditional May Festival.  Eugene Ormandy, conductor of the Philadelphia Orchestra, left, shakes hands with Mayor James Stephenson.  Doug Crary, general Sesqui chairman, is standing to Stephenson's right.

The office of Sesqui headquarters was housed in the Haarer Building on Liberty Street.

The man who put all the phases of planning together, Douglas Crary.