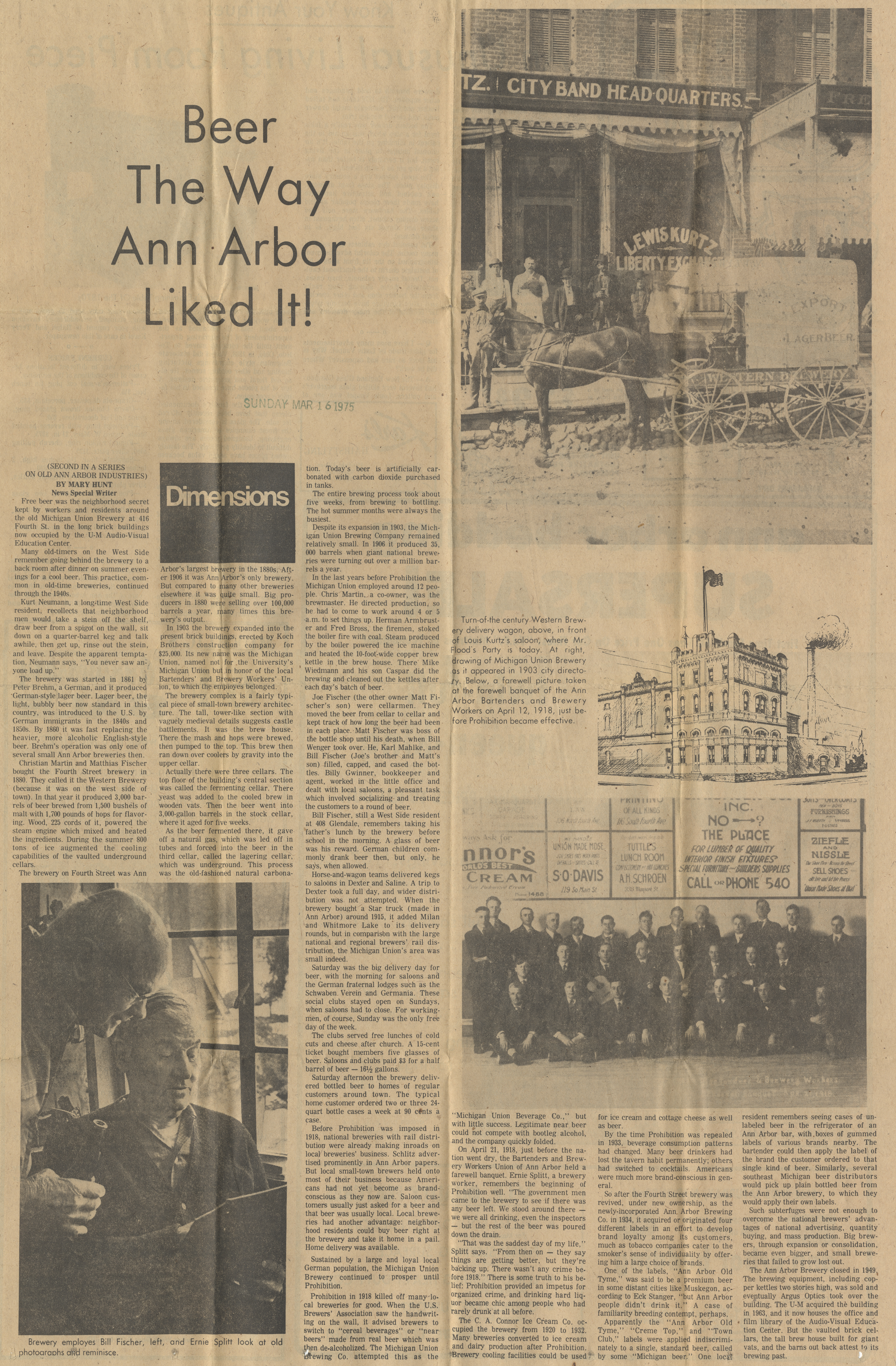 The Way Ann Arbor Liked It!

(SECOND IN A SERIES ON OLD ANN ARBOR INDUSTRIES)

Free beer was the neighborhood secret kept by workers and residents around the old Michigan Union Brewery at 416 Fourth St. in the long brick buildings now occupied by the U-M Audio-Visual Education Center.

Many old-timers on the West Side remember going behind the brewery to a back room after dinner on summer evenings for a cool beer. This practice, common in old-time breweries, continued through the 1940s.

Kurt Neumann, a longtime West Side resident, recollects that neighborhood men would take a stein off the shelf, draw beer from a spigot on the wall, sit down on a quarter-barrel keg and talk awhile, then get up, rinse out the stein, and leave. Despite the apparent temptation, Neumann says, “You never saw anyone load up.”

The brewery was started in 1861 by Peter Brehm, a German, and it produced German-style lager beer. Lager beer, the light, bubbly beer now standard in this country, was introduced to the U.S. by German immigrants in the 1840s and 1850s. By 1860 it was fast replacing the heavier, more alcoholic English-style beer. Brehm’s operation was only one of several small Ann Arbor breweries then.

Christian Martin and Matthias Fischer bought the Fourth Street brewery in 1880. They called it the Western Brewery (because it was on the west side of town). In that year it produced 3,000 barrels of beer brewed from 1,500 bushels of malt with 1,700 pounds of hops for flavoring. Wood, 225 cords of it, powered the steam engine which mixed and heated the ingredients. During the summer 800 tons of ice augmented the cooling capabilities of the vaulted underground cellars.

The brewery on Fourth Street was Ann Arbor’s largest brewery in the 1880s. After 1906 it was Ann Arbor's only brewery. But compared to many other breweries elsewhere it was quite small. Big producers in 1880 were selling over 100,000 barrels a year, many times this brewery’s output.

In 1903 the brewery expanded into the present brick buildings, erected by Koch Brothers construction company for $25,000. Its new name was the Michigan Union, named not for the University’s Michigan Union but in honor of the local Bartenders' and Brewery Workers' Union, to which the employes belonged.

The brewery complex is a fairly typical piece of small-town brewery architecture. The tall, tower-like section with vaguely medieval details suggests castle battlements. It was the brew house. There the mash and hops were brewed, then pumped to the top. This brew then ran down over coolers by gravity into the upper cellar.

Actually there were three cellars. The top floor of the building’s central section was called the fermenting cellar. There yeast was added to the cooled brew in wooden vats. Then the beer went into 3,000-gallon barrels in the stock cellar, where it aged for five weeks.

As the beer fermented there, it gave off a natural gas, which was led off in tubes and forced into the beer in the third cellar, called the lagering cellar, which was underground. This process was the old-fashioned natural carbonation. Today's beer is artificially carbonated with carbon dioxide purchased in tanks.

The entire brewing process took about five weeks, from brewing to bottling. The hot summer months were always the busiest.

Despite its expansion in 1903, the Michigan Union Brewing Company remained relatively small. In 1906 it produced 35,000 barrels when giant national brewer ries were turning out over a million barrels a year.

In the last years before Prohibition the Michigan Union employed around 12 people. Chris Martin., a co-owner, was the brewmaster. He directed production, so he had to come to work around 4 or 5 a.m. to set things up. Herman Armbruster and Fred Bross, the firemen, stoked the boiler fire with coal. Steam produced by the boiler powered the ice machine and heated the 10-foot-wide copper brew kettle in the brew house. There Mike Wiedmann and his son Caspar did the brewing and cleaned out the kettles after each day’s batch of beer.

Joe Fischer (the other owner Matt Fischer's son) were cellarmen. They moved the beer from cellar to cellar and kept track of how long the beer had been in each place. Matt Fischer was boss of the bottle shop until his death, when Bill Wenger took over. He, Karl Mahlke, and Bill Fischer (Joe’s brother and Matt’s son) filled, capped, and cased the bottles. Billy Gwinner, bookkeeper and agent, worked in the little office and dealt with local saloons, a pleasant task which involved socializing and treating the customers to a round of beer.

Bill Fischer, still a West Side resident at 408 Glendale, remembers taking his father's lunch by the brewery before school in the morning. A glass of beer was his reward. German children commonly drank beer then, but only, he says, when allowed.

Horse-and-wagon teams delivered kegs to saloons in Dexter and Saline. A trip to Dexter took a full day, and wider distribution was not attempted. When the brewery bought a Star truck (made in Ann Arbor) around 1915, it added Milan and Whitmore Lake to its delivery rounds, but in comparison with the large national and regional brewers’ rail distribution, the Michigan Union’s area was small indeed.

Saturday was the big delivery day for beer, with the morning for saloons and the German fraternal lodges such as the Schwaben. Verein and Germania. These social clubs stayed open on Sundays, when saloons had to close. For workingmen, of course, Sunday was the only free day of the week.

The clubs served free lunches of cold cuts and cheese after church. A 15-cent ticket bought members five glasses of beer. Saloons and clubs paid $3 for a half barrel of beer — 16% gallons.

Before Prohibition was imposed in 1918, national breweries with rail distribution were already making inroads on local breweries' business. Schlitz advertised prominently in Ann Arbor papers. But local small-town brewers held onto most of their business because Americans had not yet become as brandconscious as they now are. Saloon customers usually just asked for a beer and that beer was usually local. Local breweries had another advantage: neighborhood residents could buy beer right at the brewery and take it home in a pail. Home delivery was available.

Sustained by a large and loyal local German population, the Michigan Union Brewery continued to prosper until Prohibition.

Prohibition in 1918 killed off many local breweries for good. When the U.S. Brewers’ Association saw the handwriting on the wall, it advised brewers to switch to “cereal beverages" or "near beers” made from real beer which was then de-alcoholized. The Michigan Union Viewing Co. attempted this as the "Michigan Union Beverage Co.,” but with little success. Legitimate near beer could not compete with bootleg alcohol, and the company quickly folded.

On April 21, 1918, just before the nation went dry, the Bartenders and Brewery Workers Union of Ann Arbor held a farewell banquet. Ernie Splitt, a brewery worker, remembers the beginning of Prohibition well. “The government men came to the brewery to see if there was any beer left. We stood around there — we were all drinking, even the inspectors — but the rest of the beer was poured down the drain.

“That was the saddest day of my life,” Splitt says. "From then on — they say things are getting better, but they’re backing up. There wasn’t any crime before 1918.” There is some truth to his belief: Prohibition provided an impetus for organized crime, and drinking hard liquor became chic among people who had rarely drunk at all before.

The C. A. Connor Ice Cream Co. occupied the brewery from 1920 to 1932. Many breweries converted to ice cream and dairy production after Prohibition. Brewery cooling facilities could be used for ice cream and cottage cheese as well as beer.

By the time Prohibition was repealed in 1933, beverage consumption patterns had changed. Many beer drinkers had lost the tavern habit permanently; others, had switched to cocktails. Americans were much more brand-conscious in general.

So after the Fourth Street brewery was revived, under new ownership, as the newly-incorporated Ann. Arbor Brewing Co. in 1934, it acquired or originated four different labels in an effort to develop brand loyalty among its customers, much as tobacco companies cater to the smoker’s sense of individuality by offering him a large choice of brands.

One of the labels, "Ann Arbor Old Tyme,” was said to be a premium beer in some distant cities like Muskegon, according to Eck Stanger, “but Ann Arbor people didn’t drink it.” A case of familiarity breeding contempt, perhaps.

Apparently the “Ann Arbor Old Tyme,” “Creme Top,” and “Town Club,” labels were applied indiscriminately to a single, standard beer, called by some “Michigan beer." One local resident remembers seeing cases of un-labeled beer in the refrigerator of an Ann Arbor bar, with boxes of gummed labels of various brands nearby. The bartender could then apply the label of the brand the customer ordered to that single kind of beer. Similarly, several southeast Michigan beer distributors would pick up plain bottled beer from the Ann Arbor brewery, to which they would apply their own labels.

Such subterfuges were not enough to overcome the national brewers’ advantages of national advertising, quantity buying, and mass production. Big brewers, through expansion or consolidation, became even bigger, and small breweries that failed to grow lost out.

The Ann Arbor Brewery closed in 1949. The brewing equipment, including copper kettles two stories high, was sold and eventually Argus Optics took over the building. The U-M acquired thfe building in 1963, and it now houses the office and film library of the Audio-Visual Education Center. But the vaulted brick cellars, the tall brew house built for giant vats, and the bams out back attest to its brewing past.

Turn-of-the century Western Brewery delivery wagon, above, in front of Louis Kurtz's saloon, where Mr. Flood's Party is today. At right, drawing of Michigan Union Brewery as it appeared in 1903 city directory. Below, a farewell picture taken at the farewell banquet of the Ann Arbor Bartenders and Brewery Workers on April 12, 1918, just before Prohibition became effective.