Join The Danforths For An Eclectic Musical Evening 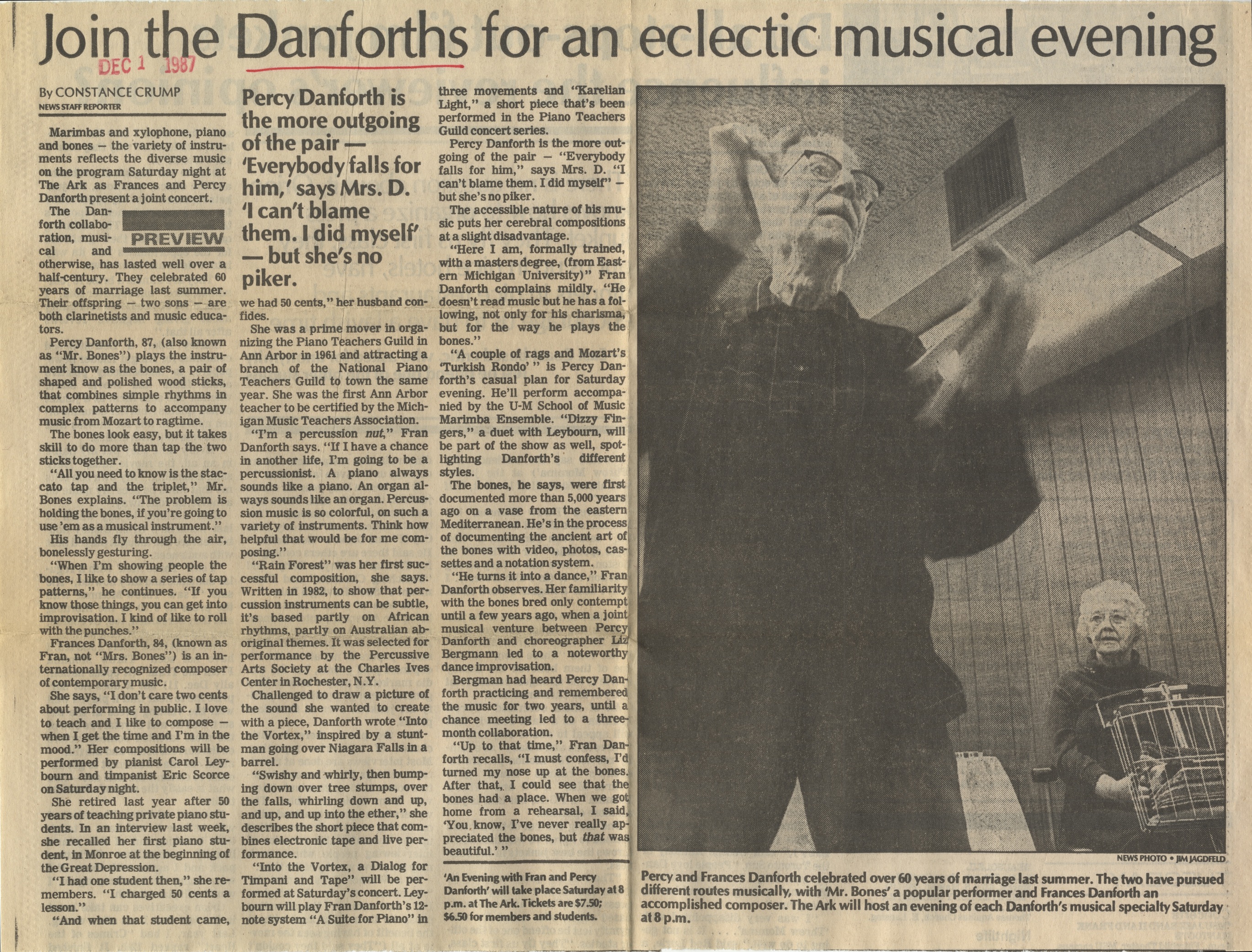 ﻿Join the Danforths for an eclectic musical evening

Marimbas and xylophone, piano and bones -- the variety of instruments reflects the diverse music on the program Saturday night at The Ark as Frances and Percy Danforth present a joint concert.

The Danforth collaboration, musical and otherwise, has lasted well over a half-century. They celebrated 60 years of marriage last summer. Their offspring -- two sons -- are both clarinetists and music educators.

Percy Danforth, 87, (also known as "Mr. Bones"} plays the instrument know [sic] as the bones, a pair of shaped and polished wood sticks, that combines simple rhythms in complex patterns to accompany music from Mozart to ragtime.

The bones look easy, but it takes skill to do more than tap the two sticks together.

"All you need to know is the staccato tap and the triplet," Mr. Bones explains. "The problem is holding the bones, if you're going to use 'em as a musical instrument."

His hands fly through the air, bonelessly gesturing.

"When I'm showing people the bones, I like to show a series of tap patterns," he continues. "If you know these things, you can get into improvisation. I kind of like to roll with the punches."

Frances Danforth, 84, (known as Fran, not "Mrs. Bones") is an internationally recognized composer of contemporary music.

She says, "I don't care two cents about performing in public. I love to teach and I like to compose -- when I get the time and I'm in the mood." Her compositions will be performed by pianist Carol Leybourn and timpanist Eric Scorce on Saturday night.

She retired last year after 50 years of teaching private piano students. In an interview last week, she recalled her first piano student, in Monroe at the beginning of the Depression.

"I had one student then," she remembers. "I charged 50 cents a lesson."

"And when that student came, we had 50 cents," her husband confides.

"Rain Forest" was her first successful composition, she says. Written in 1982, to show that percussion instruments can be subtle, it's based partly on African rhythms, partly on Australian aboriginal themes. It was selected for performance by the Percussive Arts Society at the Charles Ives center in Rochester, N.Y.

Challenged to draw a picture of the sound she wanted to create with a piece, Danforth wrote "Into the Vortex," inspired by a stuntman going over Niagara Falls in a barrel.

"Swishy and whirly, then bumping down over tree stumps, over the falls, whirling down and up, and up, and up into the ether," she describes the short piece that combines electronic tape and live performance.

"Into the Vortex, a Dialog for Timpani and Tape" will be performed at Saturdays' concert. Leybourn will play Fran Danforth's 12-note system "A Suite for Piano" in three movements and "Karelian Light," a short piece that's been performed in the Piano Teachers Guild concert series.

Percy Danforth is the more outgoing of the pair -- "Everybody falls for him," says Mrs. D. "I can't blame them. I did myself" -- but she's no piker.

The accessible nature of his music puts her cerebral compositions at a slight disadvantage.

"Here I am, formally trained, with a masters degree, (from Eastern Michigan University)" Fran Danforth complains mildly. "He doesn't read music but he has a following, not only for his charisma, but for the way he plays the bones."

"A couple of rags and Mozart's 'Turkish Rondo' " is Percy Danforth's casual plan for Saturday evening. He'll perform accompanied by the U-M School of Music Marimba Ensemble. "Dizzy Fingers," a duet with Leybourn will be part of the show as well, spotlighting Danforth's different styles.

The bones, he says were first documented more than 5,000 years ago on a vase from the Eastern Mediterranean. He's in the process of documenting the ancient art of the bones with video, photos, cassettes and a notation system.

"He turns it into a dance," Fran Danforth observes. Her familiarity with the bones bred only contempt until a few years ago, when a joint musical venture between Percy Danforth and choreographer Liz Bergmann led to a noteworthy dance improvisation.

Bergman had heard Percy Danforth practicing and remembered the music for two years, until a chance meeting led to a three-month collaboration.

"Up to that time," Fran Danforth recalls, "I must confess, I'd turned my nose up at the bones. After that, I could see that the bones had a place. When we got home from a rehearsal, I said, 'You know, I've never really appreciated the bones, but that was beautiful.' "

Percy and Frances Danforth celebrated over 60 years of marriage last summer. The two have different routes musically, with 'Mr. Bone' a popular performer and Frances Danforth an accomplished composer. The Ark will host an evening of each Danforth's musical specialty at 8 p.m.