From Prop 48 To College Graduate 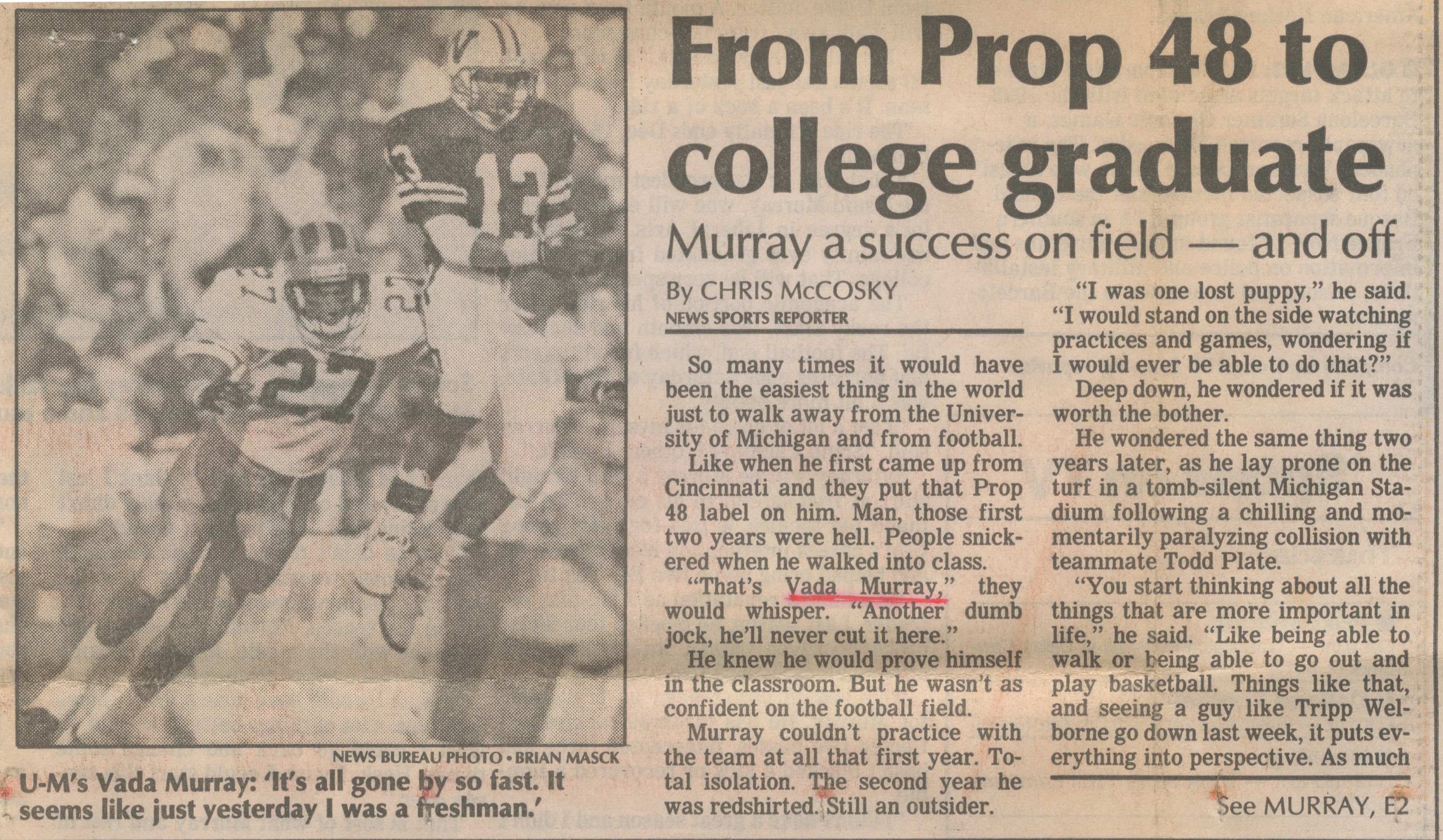 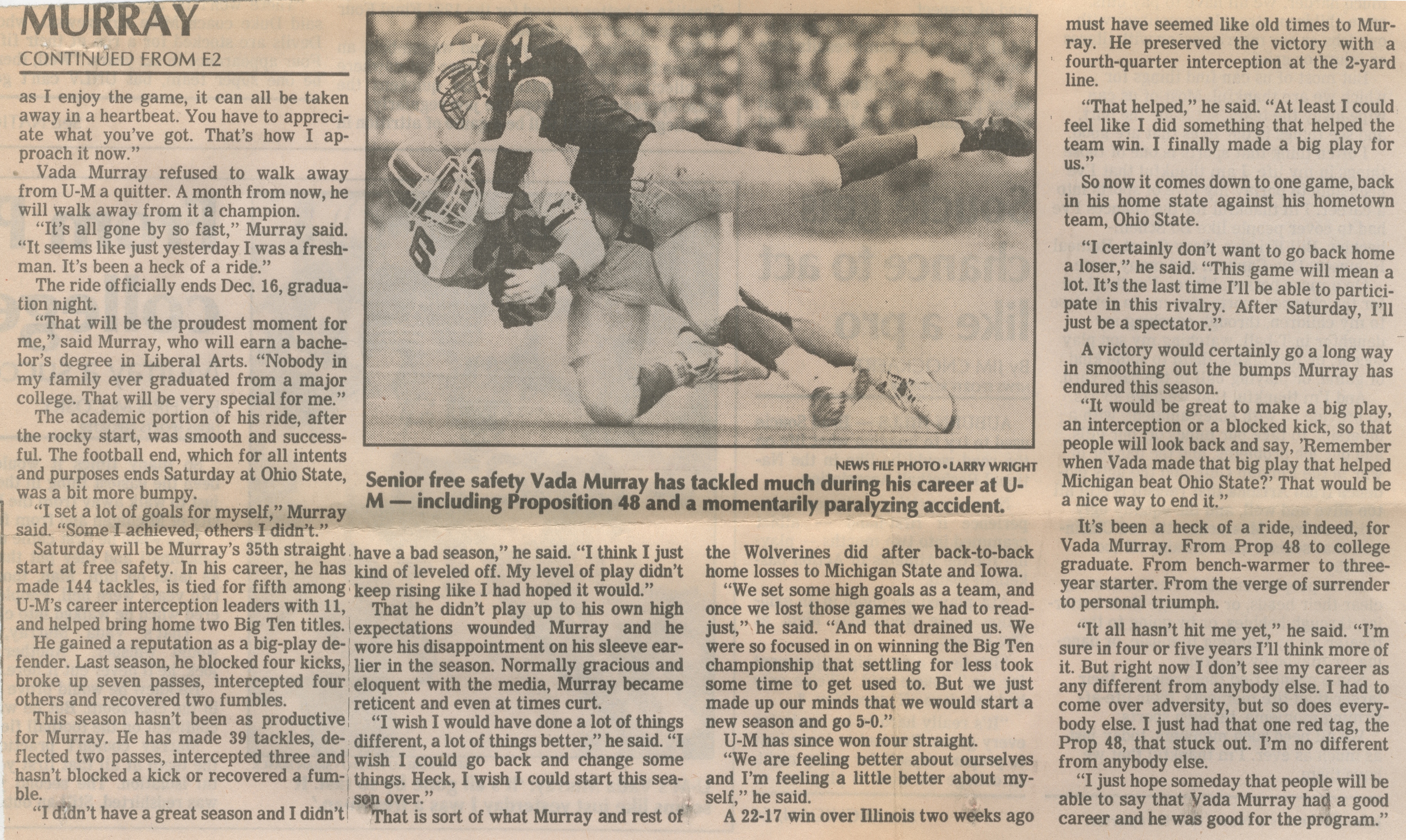 ﻿From Prop 48 to college graduate

Murray a success on field — and off

So many times it would have been the easiest thing in the world just to walk away from the University of Michigan and from football.

Like when he first came up from Cincinnati and they put that Prop 48 label on him. Man, those first two years were hell. People snickered when he walked into class.

He knew he would prove himself in the classroom. But he wasn’t as confident on the football field.

Murray couldn’t practice with the team at all that first year. Total isolation. Tie second year he was redshirted. Still an outsider.

“I was one lost puppy,” he said. “I would stand on the side watching practices and games, wondering if I would ever be able to do that?”

Deep down, he wondered if it was worth the bother.

He wondered the same thing two years later, as he lay prone on the turf in a tomb-silent Michigan Stadium following a chilling and momentarily paralyzing collision with teammate Todd Plate.

“You start thinking about all the things that are more important in life,” he said. “Like being able to walk or being able to go out and play basketball. Things like that, and seeing a guy like Tripp Welborne go down last week, it puts everything into perspective. As much as I enjoy the game, it can all be taken away in a heartbeat. You have to appreciate what you've got. That's how I approach it now.”

“It's all gone by so fast,” Murray said. “It seems like just yesterday I was a freshman. It's been a heck of a ride."

“That will be the proudest moment for me,” said Murray, who will earn a bachelor’s degree in Liberal Arts. “Nobody in my family ever graduated from a major college. That will be very special for me.”

The academic portion of his ride, after the rocky start, was smooth and successful. The football end, which for all intents and purposes ends Saturday at Ohio State, a bit more bumpy.

“I set a lot of goals for myself,” Murray said. “Some I achieved, others I didn’t.”

Saturday will be Murray’s 35th straight start at free safety. In his career, he has made 144 tackles, is tied for fifth among: U-M’s career interception leaders with 11, and helped bring home two Big Ten titles.

He gained a reputation as a big-play defender. Last season, he blocked four kicks, broke up seven passes, intercepted four others and recovered two fumbles. |

This season hasn’t been as productive for Murray. He has made 39 tackles, deflected two passes, intercepted three and hasn’t blocked a kick or recovered a fumble.

“I didn’t have a great season and I didn’t have a bad season,” he said. “I think I just kind of leveled off. My level of play didn’t keep rising like I had hoped it would.”

That he didn’t play up to his own high expectations wounded Murray and he wore his disappointment on his sleeve earlier in the season. Normally gracious and eloquent with the media, Murray became reticent and even at times curt.

That is sort of what Murray and rest of the Wolverines did after back-to-back home losses to Michigan State and Iowa.

“We set some high goals as a team, and once we lost those games we had to readjust,”he said. “And that drained us. We were so focused in on winning the Big Ten championship that settling for less took some time to get used to. But we just made up our minds that we would start a new season and go 5-0.”

U-M has since won four straight.

A 22-17 win over Ilinois two weeks ago must have seemed like old times to Murray. He preserved the victory with a fourth-quarter interception at the 2-yard line.

“That helped,” he said. “At least I could feel like I did something that helped the team win. I finally made a big play for us."

So now it comes down to one game, back in his home state against his hometown team, Ohio State.

“I certainly don’t want to go back home a loser,” he said. “This game will mean a lot. It’s the last time I'll be able to participate in this rivalry. After Saturday, I'll just be a spectator.”

A victory would certainly go a long way in smoothing out the bumps Murray has endured this season.

“It would be great to make a big play, an interception or a blocked kick, so that people will look back and say, Remember when Vada made that big play that helped Michigan beat Ohio State?’ That would be a nice way to end it.”

It’s been a heck of a ride, indeed, for Vada Murray. From Prop 48 to college graduate. From bench-warmer to three- year starter. From the verge of surrender to personal triumph.

“I just hope someday that people will be able to say that Yada Murray had a good career and he was good for the program.”

Senior free safety Vada Murray has tackled much during his career at U- M— including Proposition 48 and momentarily paralyzing accident.