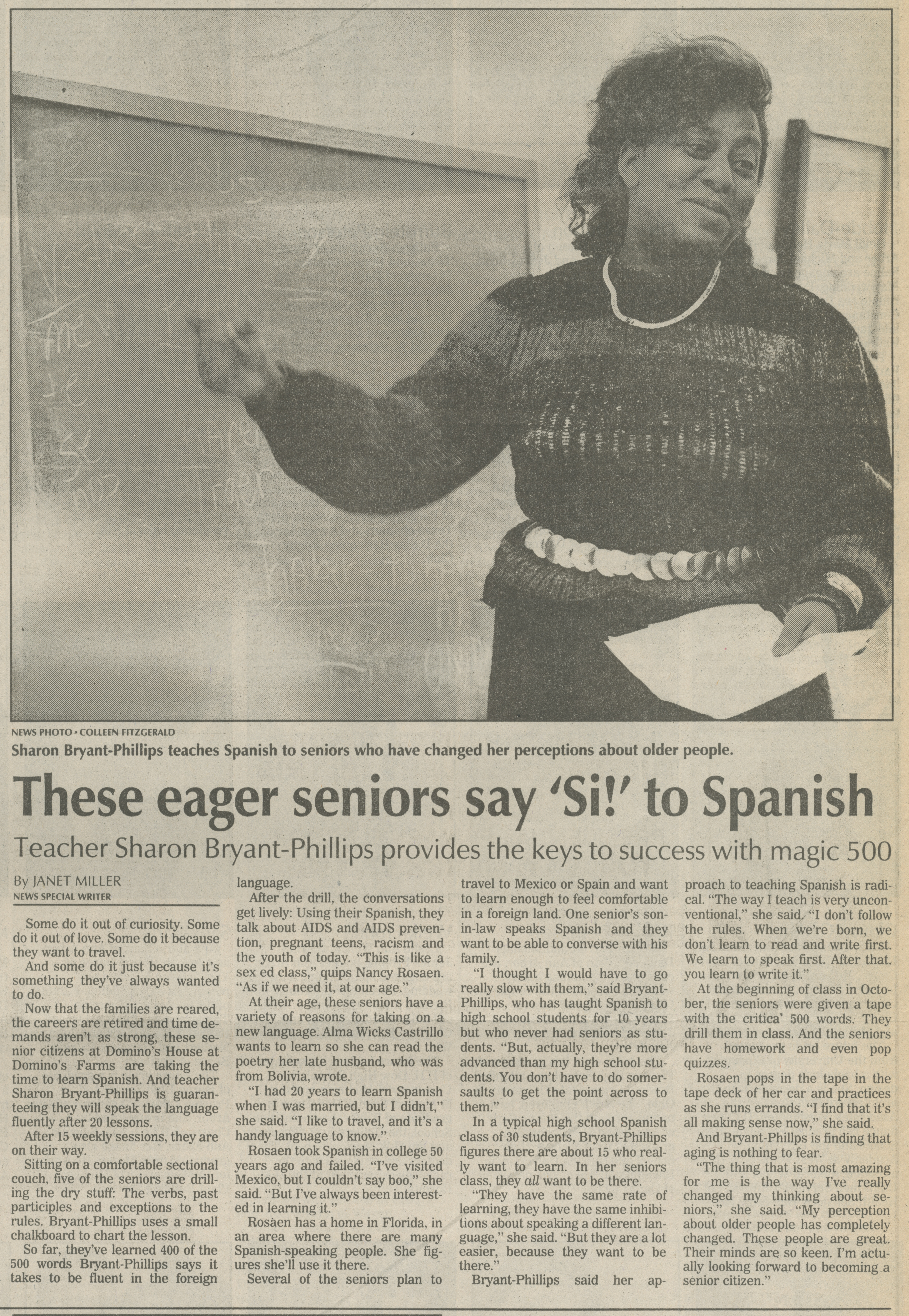 Sharon Bryant-Phillips teaches Spanish to seniors who have changed her perceptions about older people.

And some do it just because it’s something they’ve always wanted to do.

Now that the families are reared, the careers are retired and time demands aren’t as strong, these senior citizens at Domino’s House at Domino’s Farms are taking the time to learn Spanish. And teacher Sharon Bryant-Phillips is guaranteeing they will speak the language fluently after 20 lessons.

After 15 weekly sessions, they are on their way.

Sitting on a comfortable sectional couch, five of the seniors are drilling the dry stuff: The verbs, past participles and exceptions to the rules. Bryant-Phillips uses a small chalkboard to chart the lesson.

So far, they’ve learned 400 of the 500 words Bryant-Phillips says it takes to be fluent in the foreign language.

After the drill, the conversations get lively: Using their Spanish, they talk about AIDS and AIDS prevention, pregnant teens, racism and the youth of today. “This is like a sex ed class,” quips Nancy Rosaen. “As if we need it, at our age.”

At their age, these seniors have a variety of reasons for taking on a new language. Alma Wicks Castrillo wants to learn so she can read the poetry her late husband, who was from Bolivia, wrote.

“I had 20 years to learn Spanish when I was married, but I didn’t,” she said. “I like to travel, and it’s a handy language to know.”

Rosaen took Spanish in college 50 years ago and failed. “I’ve visited Mexico, but I couldn’t say boo,” she said. “But I’ve always been interested in learning it.”

Rosaen has a home in Florida, in an area where there are many Spanish-speaking people. She figures she’ll use it there.

Several of the seniors plan to travel to Mexico or Spain and want to learn enough to feel comfortable in a foreign land. One senior’s son-in-law speaks Spanish and they want to be able to converse with his family.

“I thought I would have to go really slow with them,” said Bryant-Phillips, who has taught Spanish to high school students for 10 years but who never had seniors as students. “But, actually, they’re more advanced than my high school students. You don’t have to do somersaults to get the point across to them.”

In a typical high school Spanish class of 30 students, Bryant-Phillips figures there are about 15 who really want to learn. In her seniors class, they all want to be there.

Bryant-Phillips said her approach to teaching Spanish is radical. “The way I teach is very unconventional,” she said. “I don’t follow the rules. When we’re born, we don’t learn to read and write first. We learn to speak first. After that, you learn to write it.”

At the beginning of class in October, the seniors were given a tape with the critical 500 words. They drill them in class. And the seniors have homework and even pop quizzes.

Rosaen pops in the tape in the tape deck of her car and practices as she runs errands. “I find that it’s all making sense now,” she said.

And Bryant-Phillps is finding that aging is nothing to fear.

“The thing that is most amazing for me is the way I’ve really changed my thinking about seniors,” she said. “My perception about older people has completely changed. These people are great. Their minds are so keen. I’m actually looking forward to becoming a senior citizen.”