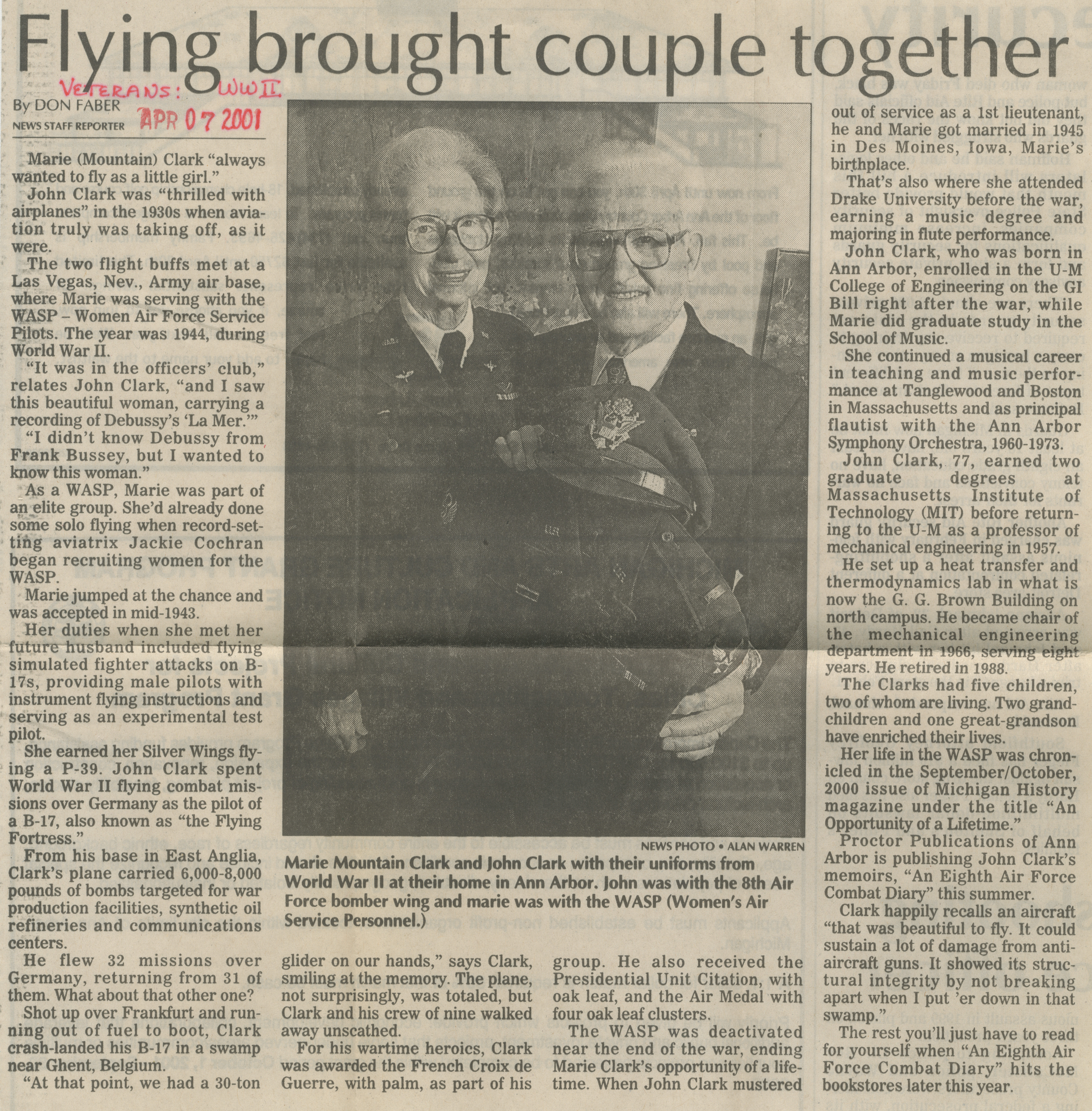 Marie Mountain Clark and John Clark with their uniforms from World War II at their home in Ann Arbor. John was with the 8th Air Force bomber wing and marie was with the WASP (Women's Air Service Personnel.)

John Clark was “thrilled with airplanes” in the 1930s when aviation truly was taking off, as it were.

The two flight buffs met at a Las Vegas, Nev., Army air base, where Marie was serving with the WASP - Women Air Force Service Pilots. The year was 1944, during World War II.

“It was in the officers’ club,” relates John Clark, “and I saw this beautiful woman, carrying a recording of Debussy’s ‘La Mer.’”

“I didn’t know Debussy from Frank Bussey, but I wanted to know this woman.”

As a WASP, Marie was part of an elite group. She’d already done some solo flying when record-setting aviatrix Jackie Cochran began recruiting women for the WASP.

Marie jumped at the chance and was accepted in mid-1943.

Her duties when she met her future husband included flying simulated fighter attacks on B-17s, providing male pilots with instrument flying instructions and serving as an experimental test pilot.

She earned her Silver Wings flying a P-39. John Clark spent World War II flying combat missions over Germany as the pilot of a B-17, also known as “the Flying Fortress.”

From his base in East Anglia, Clark’s plane carried 6,000-8,000 pounds of bombs targeted for war production facilities, synthetic oil refineries and communications centers.

He flew 32 missions over Germany, returning from 31 of them. What about that other one?

Shot up over Frankfurt and running out of fuel to boot, Clark crash-landed his B-17 in a swamp near Ghent, Belgium.

“At that point, we had a 30-ton glider on our hands,” says Clark, smiling at the memory. The plane, not surprisingly, was totaled, but Clark and his crew of nine walked away unscathed.

For his wartime heroics, Clark was awarded the French Croix de Guerre, with palm, as part of his
group. He also received the Presidential Unit Citation, with oak leaf, and the Air Medal with four oak leaf clusters.

The WASP was deactivated near the end of the war, ending Marie Clark’s opportunity of a lifetime. When John Clark mustered out of service as a 1st lieutenant, he and Marie got married in 1945 in Des Moines, Iowa, Marie’s birthplace.

That’s also where she attended Drake University before the war, earning a music degree and majoring in flute performance.

John Clark, who was born in Ann Arbor, enrolled in the U-M College of Engineering on the GI Bill right after the war, while Marie did graduate study in the School of Music.

She continued a musical career in teaching and music performance at Tanglewood and Boston in Massachusetts and as principal flautist with the Ann Arbor Symphony Orchestra, 1960-1973.

John Clark, 77, earned two graduate degrees at Massachusetts Institute of Technology (MIT) before returning to the U-M as a professor of mechanical engineering in 1957.

He set up a heat transfer and thermodynamics lab in what is now the G. G. Brown Building on north campus. He became chair of the mechanical engineering department in 1966, serving eight years. He retired in 1988.

The Clarks had five children, two of whom are living. Two grandchildren and one great-grandson have enriched their lives.

Her life in the WASP was chronicled in the September/October, 2000 issue of Michigan History magazine under the title “An Opportunity of a Lifetime.”

Clark happily recalls an aircraft “that was beautiful to fly. It could sustain a lot of damage from antiaircraft guns. It showed its structural integrity by not breaking apart when I put ’er down in that swamp.”

The rest you’ll just have to read for yourself when “An Eighth Air Force Combat Diary” hits the bookstores later this year.