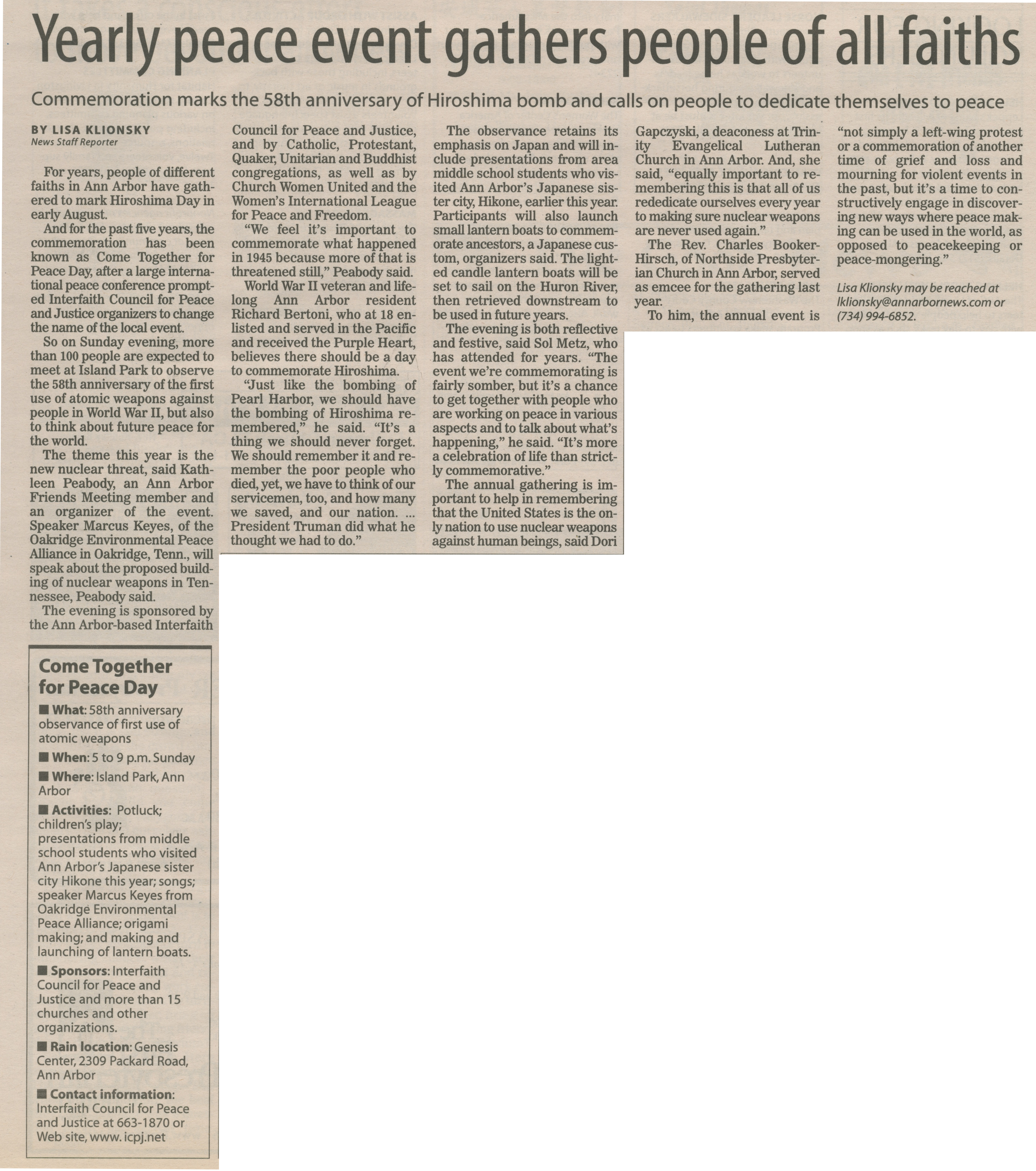 For years, people of different faiths in Ann Arbor have gathered to mark Hiroshima Day in early August.

And for the past five years, the commemoration has been known as Come Together for Peace Day, after a large international peace conference prompted Interfaith Council for Peace and Justice organizers to change the name of the local event.

So on Sunday evening, more than 100 people are expected to meet at Island Park to observe the 58th anniversary of the first use of atomic weapons against people in World War II, but also to think about future peace for the world.

The theme this year is the new nuclear threat, said Kathleen Peabody, an Ann Arbor Friends Meeting member and an organizer of the event. Speaker Marcus Keyes, of the Oakridge Environmental Peace Alliance in Oakridge, Tenn., will speak about the proposed building of nuclear weapons in Tennessee, Peabody said.

The evening is sponsored by the Ann Arbor-based Interfaith Council for Peace and Justice, and by Catholic, Protestant, Quaker, Unitarian and Buddhist congregations, as well as by Church Women United and the Women’s International League for Peace and Freedom.

“We feel it’s important to commemorate what happened in 1945 because more of that is threatened still,” Peabody said.

World War II veteran and lifelong Ann Arbor resident Richard Bertoni, who at 18 enlisted and served in the Pacific and received the Purple Heart, believes there should be a day to commemorate Hiroshima.

“Just like the bombing of Pearl Harbor, we should have the bombing of Hiroshima remembered,” he said. “It’s a thing we should never forget. We should remember it and remember the poor people who died, yet, we have to think of our servicemen, too, and how many we saved, and our nation. ... President Truman did what he thought we had to do.”

The observance retains its emphasis on Japan and will include presentations from area middle school students who visited Ann Arbor’s Japanese sister city, Hikone, earlier this year. Participants will also launch small lantern boats to commemorate ancestors, a Japanese custom, organizers said. The lighted candle lantern boats will be set to sail on the Huron River, then retrieved downstream to be used in future years.

The evening is both reflective and festive, said Sol Metz, who has attended for years. “The event we’re commemorating is fairly somber, but it’s a chance to get together with people who are working on peace in various aspects and to talk about what’s happening,” he said. “It’s more a celebration of life than strictly commemorative.”

The annual gathering is important to help in remembering that the United States is the only nation to use nuclear weapons against human beings, said Dori Gapczyski, a deaconess at Trinity Evangelical Lutheran Church in Ann Arbor. And, she said, “equally important to remembering this is that all of us rededicate ourselves every year to making sure nuclear weapons are never used again.”

The Rev. Charles Booker-Hirsch, of Northside Presbyterian Church in Ann Arbor, served as emcee for the gathering last year.

To him, the annual event is “not simply a left-wing protest or a commemoration of another time of grief and loss and mourning for violent events in the past, but it’s a time to constructively engage in discovering new ways where peace making can be used in the world, as opposed to peacekeeping or peace-mongering.”

Come Together for Peace Day

■ What: 58th anniversary observance of first use of atomic weapons

■ Sponsors: Interfaith Council for Peace and Justice and more than 15 churches and other organizations.

■ Contact information: Interfaith Council for Peace and Justice at 663-1870 or Web site, www.icpj.net