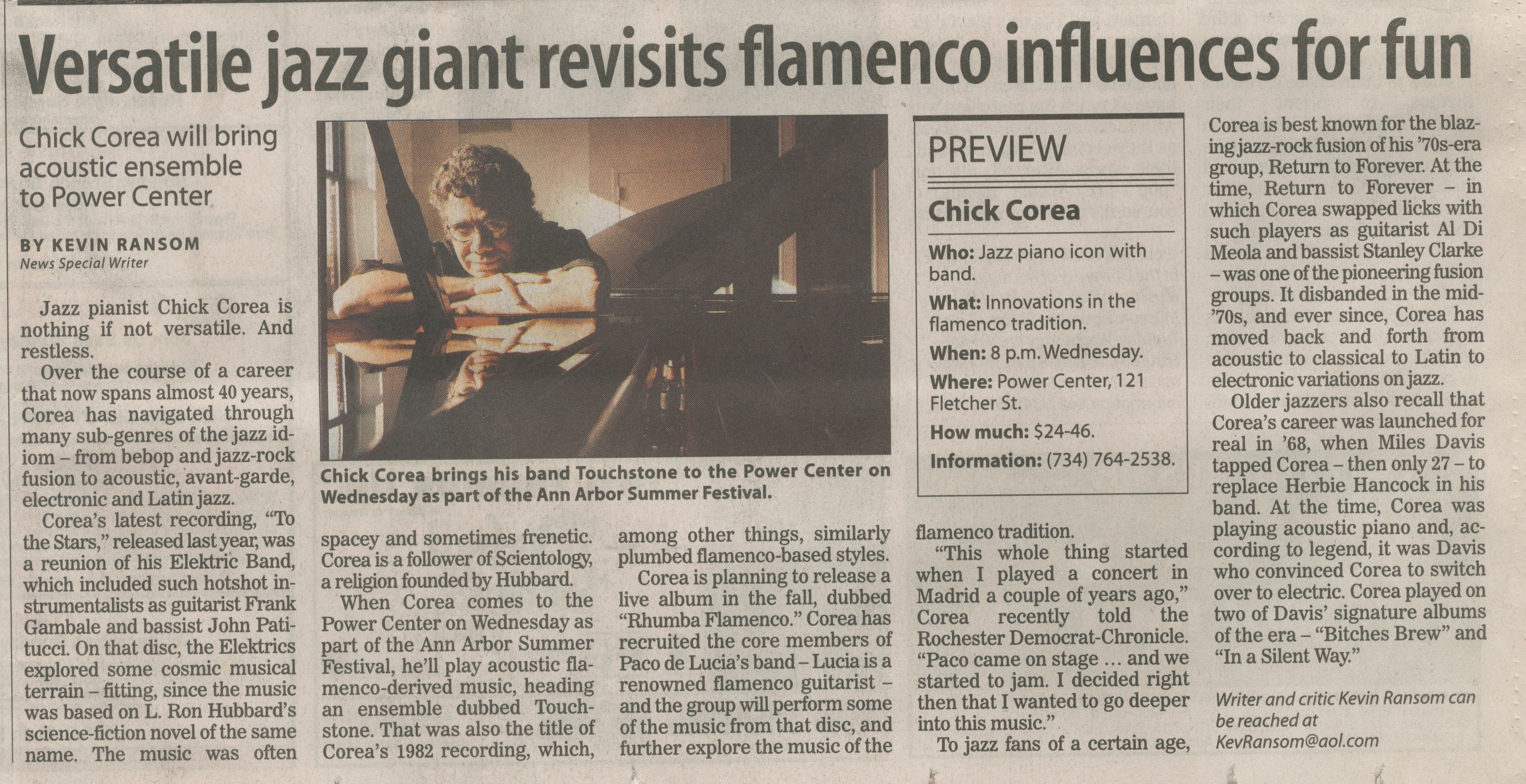 Who: Jazz piano icon with band.

What: Innovations in the flamenco tradition.

Jazz pianist Chick Corea is nothing if not versatile. And restless.

Over the course of a career that now spans almost 40 years, Corea has navigated through many sub-genres of the jazz idiom - from bebop and jazz-rock fusion to acoustic, avant-garde, electronic and Latin jazz.

Corea’s latest recording, “To the Stars,” released last year, was a reunion of his Elektric Band, which included such hotshot instrumentalists as guitarist Frank Gambale and bassist John Patitucci. On that disc, the Elektrics explored some cosmic musical terrain - fitting, since the music was based on L. Ron Hubbard’s science-fiction novel of the same name. The music was often spacey and sometimes frenetic. Corea is a follower of Scientology, a religion founded by Hubbard.

When Corea comes to the Power Center on Wednesday as part of the Ann Arbor Summer Festival, he’ll play acoustic flamenco-derived music, heading an ensemble dubbed Touchstone. That was also the title of Corea’s 1982 recording, which, among other things, similarly plumbed flamenco-based styles.

Corea is planning to release a live album in the fall, dubbed “Rhumba Flamenco.” Corea has recruited the core members of Paco de Lucia’s band - Lucia is a renowned flamenco guitarist - and the group will perform some of the music from that disc, and further explore the music of the flamenco tradition.

“This whole thing started when I played a concert in Madrid a couple of years ago,” Corea recently told the Rochester Democrat-Chronicle. “Paco came on stage ... and we started to jam. I decided right then that I wanted to go deeper into this music.”

To jazz fans of a certain age, Corea is best known for the blazing jazz-rock fusion of his ’70s-era group, Return to Forever. At the time, Return to Forever - in which Corea swapped licks with such players as guitarist Al Di Meola and bassist Stanley Clarke - was one of the pioneering fusion groups. It disbanded in the mid-’70s, and ever since, Corea has moved back and forth from acoustic to classical to Latin to electronic variations on jazz.

Older jazzers also recall that Corea’s career was launched for real in ’68, when Miles Davis tapped Corea - then only 27 - to replace Herbie Hancock in his band. At the time, Corea was playing acoustic piano and, according to legend, it was Davis who convinced Corea to switch over to electric. Corea played on two of Davis’ signature albums of the era - “Bitches Brew” and “In a Silent Way.”

Writer and critic Kevin Ransom can be reached at KevRansom@aol.com