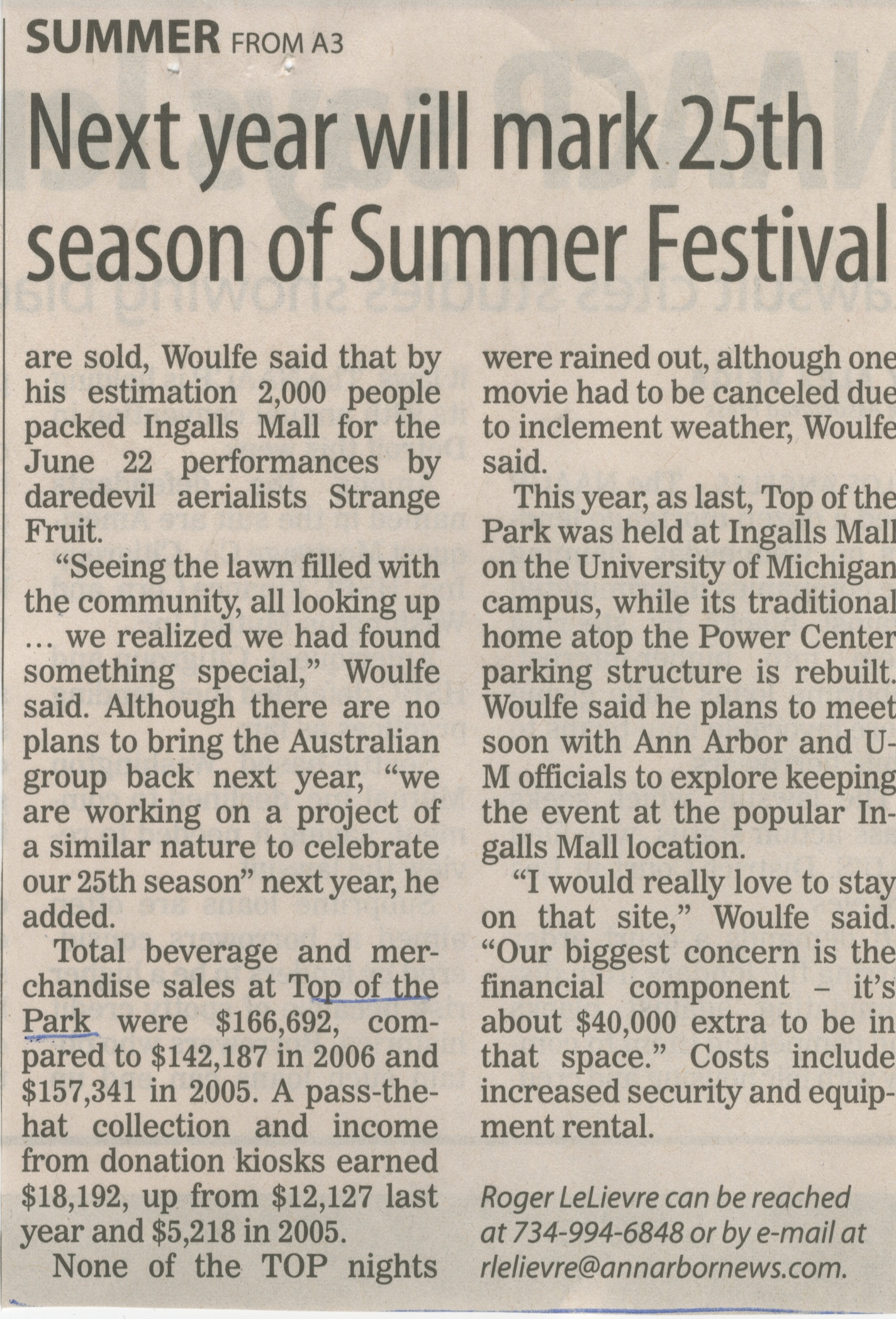 If you thought the recently concluded Ann Arbor Summer Festival looked like a hit, you were right.

The three-week festival, which wrapped up Sunday, had the highest-grossing season ever, according to director Robb Woulfe, selling $773,776 worth of tickets, an approximately 10 percent increase over the previous record of $706,197, set in 2004. Last year $615,437 worth of tickets were sold.

All in all, 14,917 people bought tickets to the festival’s 16 paid-admission performances, Woulfe said - 1,653 fewer than last year, when there were 19 ticketed shows.

“When (lang) sang Leonard Cohen’s ‘Hallelujah,’ you could have heard a pin drop - there was absolute silence in Hill Auditorium,” Woulfe said.

Almost as popular were the hip jazz band Pink Martini and 7 Fingers Circus, he added.

However a couple of shows, especially the dance troupe Momix and the taping of the radio show “Mountain Stage,” didn’t fare as well.

“A lot of the (“Mountain Stage”) performers had had recent engagements in Ann Arbor - people had already seen Duncan Sheik or Jeff Daniels. It was a fine collection of talent, but the market was very familiar with them,” Woulfe said.

Top of the Park, the Summer Festival’s free outdoor component of music, movies and more, also fared well. Although it is difficult to judge attendance since no tickets are sold, Woulfe said that by his estimation 2,000 people packed Ingalls Mall for the June 22 performances by daredevil aerialists Strange Fruit.

"Seeing the lawn filled with the community, all looking up... we realized we had found something special," Woulfe said. Although there are no plans to bring the Australian group back next year, "we are working on a project of a similar nature to celebrate our 25th season" next year, he added.

None of the TOP nights were rained out, although on movie had to be canceled due to inclement weather, Woulfe said.

This year, as last, Top of the Park was held at Ingalls Mall on the University of Michigan campus, while its traditional home atop the Power Center parking structure is rebuilt. Woulfe said he plans to meet soon with Ann Arbor and U-M officials to explore keeping the event at the popular Ingalls Mall location.

"I would really love to stay on that site," Woulfe said. "Our biggest concern is the financial component - it's about $40,000 extra to be in that space." Costs include increased security and equipment rental.

Number of rainouts: None (although one movie was canceled due to bad weather).