It was the forerunner of Hush Puppies shoes

In the late nineteenth century, Henry Krause was one of the city’s biggest taxpayers. The leather-making factory he built on Second Street stood into the 21st century and his name lives on in Krause Street nearby. But his real claim to fame is that his Ann Arbor tannery was the forerunner of Hush Puppies shoes.

Krause was born in Treffurth, Prussia, in 1820, to a family who had been tanners for two centuries. He learned the trade from his father and traveled over the greater part of Germany on foot as a Handwerkebursche—a journeyman—before immigrating to America at age twenty-four. Krause worked briefly in New York and in Liverpool, Ohio, before coming to Ann Arbor in 1845. With its large German population and several tanneries, Ann Arbor was a natural choice for an immigrant with his skills.

Krause’s first Ann Arbor job was with Emanuel Mann, who also had been born in Germany and learned tanning from his father. The next year Krause went to work for another German tanner, C. Kusterer, whom he soon bought out. In 1850 he moved the business to Second Street between Liberty and William, where he built a wood frame tannery next to a tributary of Allen Creek.

A source of water was essential for a tannery. Tanners soaked hides in water to clean them, then in a solution of water and lime to loosen the hair, and finally in water and tannin to preserve and soften the leather. The tannin came from oak bark, and in addition to water for soaking, early tanneries used water to power the mills that ground the bark.

Krause prospered, and in 1868 replaced his wooden tannery with a brick one, 30 by 120 feet. A separate storehouse held 225 cords of oak bark, and a third building housed a steam engine for grinding it. By now, Krause was selling leather throughout the state, principally for harnesses. His factory used 7,000 hides a year and its annual sales were about $45,000.

Three other nearby tanneries competed with Krause. The Weil Brothers’ tannery was on the southwest corner of First and Huron, on land that was once the home of Elisha Rumsey, Ann Arbor’s co-founder. The five Weil brothers, Jacob, Solomon, Moses, Leopold, and Marcus, were the nucleus of Ann Arbor’s earliest Jewish community, but they moved on to bigger cities in the 1870’s. Jacob Heinzmann, another German immigrant, set up a tannery in 1851 on the corner of William and Third, on the same Allen Creek tributary as Krause’s. (Its site is now a parking lot for the Argus Building.) On the other side of the tributary, also on Third but closer to Liberty, Christian Duttenhofer, a former Weil Brothers’ employee, started his own tannery in the 1860’s. Duttenhofer’s was probably a smaller operation, since the address was also his home.

Krause also built up a retail operation. In 1849 he built the first brick building on the block of Main Street south of Washington, adding to it in 1861. (In the nineteenth century, most businesses were still clustered around the courthouse to the north.) Besides selling his leather there, he made shoes and boots. 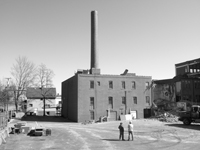 Tannery building shortly before it was torn down.

Krause married Catherine Hirth in 1846, just a year after he arrived in Ann Arbor. As his business prospered, they were able to move to a seventeen-room house on the corner of Third and Liberty, now the location of St. Paul’s. (They used the house as a parsonage and school before razing it in 1929 to make room for the church.) The Krause property ran well north of their home down to Washington and west to what is today a U-M parking lot.

In 1881 the Krause tannery was incorporated with $40,000 in capital and was subsequently outfitted with new equipment. But by then, Krause and Heinzmann were the only tanners left in town. Local tanners were probably beginning to feel the competition of large industrial tanners with lower prices and national distribution. Wildlife in Michigan was also becoming scarce, and both Krause and Heinzmann included in their ads offers to buy pelts. Krause’s ad claimed that he paid “more for hides and pelts, furs and tallow than any other man in the state.” He also began selling other brands besides his own custom-made shoes.

Krause was a respected tanner. In 1850, early in his career, he won a first place at the Michigan State Fair. The Ann Arbor Register Weekly said of Krause at the time of his death in 1893, “As a tanner of superior leather he had a wide reputation,” adding, “Although meeting with financial reverses in later years his integrity was unquestioned.”

The City Directory hints at the rest of the story. Krause seems to have given up control of the company in the 1881 incorporation, apparently the price he paid for the capital to finance the tannery’s final renovation. Beginning that year, others are named as the company’s officers, while Krause is identified only as the plant superintendent. The Krause tannery disappears entirely from the directory in 1888. In the 1890 directory, Henry Krause is listed as a clerk for Samuel Krause, his son, at the Main Street store.

The store closed a few years later, ending the Krause family’s fifty years in the leather business in Ann Arbor. But by then, another of Henry and Catherine’s sons (they had seven children) was flourishing in western Michigan. In 1883, G. Adolph Krause, known as G. A., had bought a leather shop in Grand Rapids in partnership with his mother’s brother, Fred Hirth, also a tanner. In 1901 the Hirth-Krause Company, as it was then known, moved to Rockford, a small community close to Grand Rapids, and expanded their tanning and manufacturing. G. A.’s sons, Victor and Otto, and his grandson Adolph continued in the firm. Today the company is Wolverine World Wide, Inc., the world’s largest tanner of pigskin and the makers of Hush Puppies, the shoes with the sad-eyed basset hound trademark. Henry Krause’s 1850 award from the Michigan State Fair is prominently reproduced in the company’s official history.

Meanwhile, the Krause tannery building in Ann Arbor continued to be used as a factory, first to manufacture brass goods, then car accessories, vapor lamps, and windshields. In 1925 the newly formed King Seeley Company moved in to begin manufacture of gas gauges, using the tannery building but adding a modern factory in front of it. Purchased by Chrysler in 1968, it became GT products in 1982, manufacturer of diesel governors and fuel vapor valves, and ended its life as Eaton Corporation. The tannery building was razed in 2005 to make room for an adaptive reuse condo project in the newer factory building.