The rise, fall, and revival of Ann Arbor’s downtown theaters The first movie shown in Ann Arbor was The Great Train Robbery. Filmed a century ago, in 1903, the twelve-minute adventure didn’t make it to town until the following year. On September 26, 1904, it appeared as the last item on a sold-out seven-part program at the Light Armory at Ashley and West Huron. Handcuff King Fred Gay led a bill that included minstrels, jugglers, and a boy tenor. Films may have started as an afterthought, but they soon became a draw in their own right. One of the first movies to tell a story, The Great Train Robbery featured a long list of technical firsts, among them the first intercut scenes and the first close-up--an outlaw firing a shot right at the audience. The Ann Arbor Times-News reviewer reported that it required “no great stretch of imagination for the spectator to persuade himself that he was looking at a bit from real life.” “The Great Train Robbery has been called the picture that launched a thousand nickelodeons,” laughs Art Stephan, president of the Ann Arbor Silent Film Society. Within three years of its showing, three nickelodeons (named for their 5¢ admission charge) popped up in Ann Arbor, along with three new vaudeville theaters whose entertainment included movies. 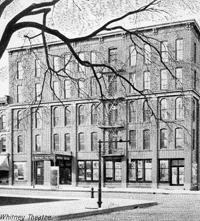 The Whitney, 117-119 North Main, originally a venue for traveling stage shows, in 1917 showed Birth of a Nation as if it were just that. The early movie was touring the United States with a twenty-piece orchestra.

Ann Arbor’s wide audience, encompassing both townspeople and university students and faculty, has supported an abundance of theaters ever since. “Ann Arbor is one of the great movie towns in the country,” says Russ Collins, executive director of the Michigan Theater. These days, popular films appear almost exclusively in huge multiplexes on the edge of town. But for most of a century, Ann Arbor supported a wide array of downtown theaters, from the first nickelodeons and vaudeville houses to glorious movie palaces like the Michigan. The Theatorium, “Ann Arbor’s Pioneer Picture Theater,” opened in November 1906 at 119 East Liberty (now, aptly, the home of Liberty Street Video). It showed three short movies for 5¢, changing the offerings three times a week. The Theatorium wasn’t alone for long. In December the Casino opened at 339 South Main (now the Real Seafood Company restaurant). It advertised that it would cater to women and children and “give good clean shows which all can patronize.” The Theatorium and the Casino were joined in 1907 by the first campus-area theater, the People’s Popular Family Theater. Soon renamed the Vaudette, it was at 220 South State, where Starbucks is now. Opening a nickelodeon was cheap--all that was needed was an empty storefront, a projector, and some folding chairs. The entrepreneur would put up a sheet at one end, install a box in the door for selling tickets (giving new meaning to the term “box office”), and get a player piano or phonograph for background music-—and he was in business. Called “the poor man’s show” or “democracy’s theater,” nickelodeons were a craze all over the country, appealing mainly to poorer audiences. The News didn’t make much of the nickelodeons’ openings, although it ran their ads. Also showing films were two new vaudeville theaters. The Bijou, at 209 East Washington, opened the same month as the Casino, followed by the Star, at 118 East Washington, in August 1907. Although they also charged 5¢ admission and were scarcely bigger than the nickelodeons, both had stages at one end that enabled them to present live shows as well as movies. Both received more notice in the local papers than the nickelodeons had. Maybe protesting a little too much, the Bijou ad invited audiences to “come and see the cozy theater and enjoy strictly high class moral entertainment.” The Star has gone down in history as the site of a student riot on March 16, 1908. According to Ann Arbor police lieutenant Mike Logghe’s True Crimes and the History of the Ann Arbor Police Department, the riot started as a student protest against manager Albert Reynolds, who allegedly had tried to win a large bet by getting a U-M football player to throw a game. When protesters failed to get Reynolds to come out (reports differ on whether he exited through the back door or was hiding in the basement), they began throwing bricks stolen from a construction site across the street. The riot lasted all night, in spite of appeals by both law dean Henry Hutchins and U-M president James Angell. Eighteen students were arrested, but charges were later dropped when they agreed to raise money for repairs. 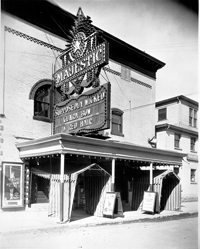 A much larger and more impressive early theater was the Majestic, at 316 Maynard (now a city parking structure). Unlike the nickelodeons, the Majestic enjoyed detailed local press coverage of its planning and arrival. The Athens, 117 North Main, the town’s major location for live stage shows, had closed in 1904, leaving a keenly felt gap. The Majestic was built by lumberyard owner Charles Sauer, who converted an indoor roller skating rink into a huge theater--1,100 seats--complete with stage, dressing rooms, balcony, box seats, ladies’ waiting room, confectionery, and manager’s office. It opened September 19, 1907, with The Girl of the Golden West, a live musical about the 1849 gold rush. The Majestic showed movies from the beginning, but vaudeville acts were its main draw--especially after 1908, when the former Athens Theater, remodeled and reopened as the Whitney, reclaimed its position as the preferred place for prime stage shows. Of the six early theaters, the Majestic was the only one to last. By 1912 all three nickelodeons were gone--the Theatorium became a photography studio, the Casino a grocery store, and the Vaudette a shoemaker’s shop. All around the country nickelodeons were closing, Art Stephan says, mainly because the early movies weren’t very good: “They were not very exciting--just a novelty.” The small vaudeville theaters lasted a little longer, but by 1915 the Bijou was gone. The Star was renamed the Columbia, then closed for good in 1919. Despite the nickelodeons’ failure, a few far-thinking producers kept developing and improving movies, making them longer and more sophisticated. In 1913 the Majestic announced it was switching to movies as its lead attraction. Manager Arthur Lane promised audiences “high class feature motion pictures” such as Ben Hur and Tess of the D’Urbervilles. In 1914 the Whitney also started occasionally showing movies. Seeking to lure middle-class audiences, it promised “good clean pictures that anyone would be glad to see.” Then, in a five-year period, four new theaters specifically designed to show movies opened. The Orpheum at 336 South Main was the first, built in 1913 by clothier J. Fred Wuerth. The architect, “Mr. F. Ehley of Detroit,” designed an arched facade reminiscent of Adler and Sullivan’s 1889 Auditorium Building in Chicago (the arch now frames the entrance to Gratzi). Inside, the decor included fancy paneling and box seats. The opening performance featured The Hills of Strife, about feuding mountaineers, plus two other movies and a live show by the Musical DeWitts. It drew such a crowd that people had to be turned away. The next year, 1914, Selby Moran built the Arcade at 715 North University, at the end of an arcade that ran along the north side of a tailor shop. Just three years later, Moran expanded the theater from twenty-six rows of seats to forty-three and added a balcony and boxes. The projector (or “motion picture machine,” as they called it then) was on the second floor--actually in the tailor shop, outside the theater proper. “We used to go to doubleheaders at the Arcade on Saturdays,” recalls John Eibler. “My mother would drop us off and take a chance when to come back. The time was doubtful when we’d come out--we had to see the whole thing.” He remembers seeing “cowboy and Indian” pictures, particularly Tom Mix features. The Rae, at 113 West Huron, opened on September 11, 1915. At 385 seats, it was the smallest of the new theaters. Its name was an amalgam of the first initials of its three owners--Russell Dobson, Alan Stanchfield, and Emil Calman. Stanchfield, the on-site manager who eventually bought the others out, visited theaters all over Michigan and Illinois to learn the tricks of the trade. He did almost everything himself--took tickets (he knew the ages of all the kids and could charge accordingly), climbed a ladder to run the projector, and hawked refreshments up and down the aisle between reels. Bob Hall, a regular customer, recalls watching cowboy movies and serials. “Sometimes the policeman on the beat would come in and stand at the back to watch,” Hall says. 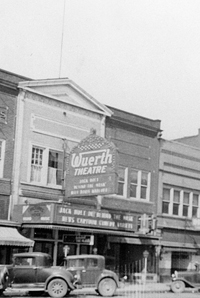 In 1918 Fred Wuerth added a second theater, naming it after himself. (He also built one with the same name in Ypsilanti.) Set perpendicular to the Orpheum, the Wuerth was reached from Main Street through a skylighted arcade to the north of the owner’s clothing store. A Hope-Jones organ was placed so it could be heard in both theaters. One of the most important films ever, Birth of a Nation, bypassed all four of the new theaters in favor of the Whitney. D. W. Griffith’s Civil War epic was presented as if it were a live road show, traveling around the country with a twenty-piece orchestra. Admission to the four showings on May 18 and 19, 1917, was $1.50—at a time when most ticket prices were 5¢ or 10¢. Although seriously flawed by Griffith’s racist portrayal of newly freed slaves, the film was a turning point in movie history, showing audiences how engrossing this new medium could be. “It’s hard to overstate the importance of Birth of a Nation,” says Collins. “Griffith coalesced a film language recognizable today, the technique of telling a story with film.” The following week the Whitney showed Intolerance, which Griffith produced as an answer to criticism of Birth of a Nation. The days of releasing many prints simultaneously across the nation were still in the future: Birth of a Nation had been shown in bigger cities in 1915 and Intolerance in 1916. But movie exhibition was already becoming more organized. At first, all the early movie theaters were run by their owners. With the exception of the Rae, however, all were eventually leased to the Battle Creek–based Butterfield theater chain. Gerald Hoag, Butterfield’s manager of the Majestic in the 1920s, faced the challenge of handling the rushes college students made on the theater, usually after a victorious football game. “They’d holler and yell and demand a free movie. They always got in,” recalls Bob Hall, who as a small boy took part in one of these rushes. “I was scared stiff--I was afraid I’d get squashed--but I wanted to see a free movie. My mother didn’t like it. She castigated me when I got home.” Hoag, a big Wolverine fan, hired football players as ushers. In the days before regular radio sportscasts, Hoag obtained scores from the ticker-tape machine at Huston Brothers’ pool hall on State Street and announced them to his audience. Then he got a better idea: he leased a direct telegraph wire from the press box wherever the U-M was playing and had Fred Belser, a telegraph operator at Western Union, sit on stage and transcribe the messages. Hoag would read the play-by-play to the audience while an assistant moved a toy football across a mocked-up field. At halftime Hoag presented a vaudeville show. One of Hoag’s claims to fame was discovering Fred Waring and His Pennsylvanians. In 1922 Waring’s band played at the annual J-Hop at Waterman Gym. Although two more famous bands were also playing, Hoag noticed that most of the dancers drifted over to Waring. Hoag booked him at the Majestic, where he stayed six weeks, playing one-hour sets interspersed with movies. That engagement led to work in Detroit and other big cities, and for the rest of his career Waring credited Hoag with giving him his big break.

The Michigan Theater opened in 1928 as a silent movie palace. The next year they switched to talkies.

People lined up to see "It Happens Every Spring", written by Ann Arbor's Shirley Smith.