How cool is it? Summer Festival provides unique entertainment 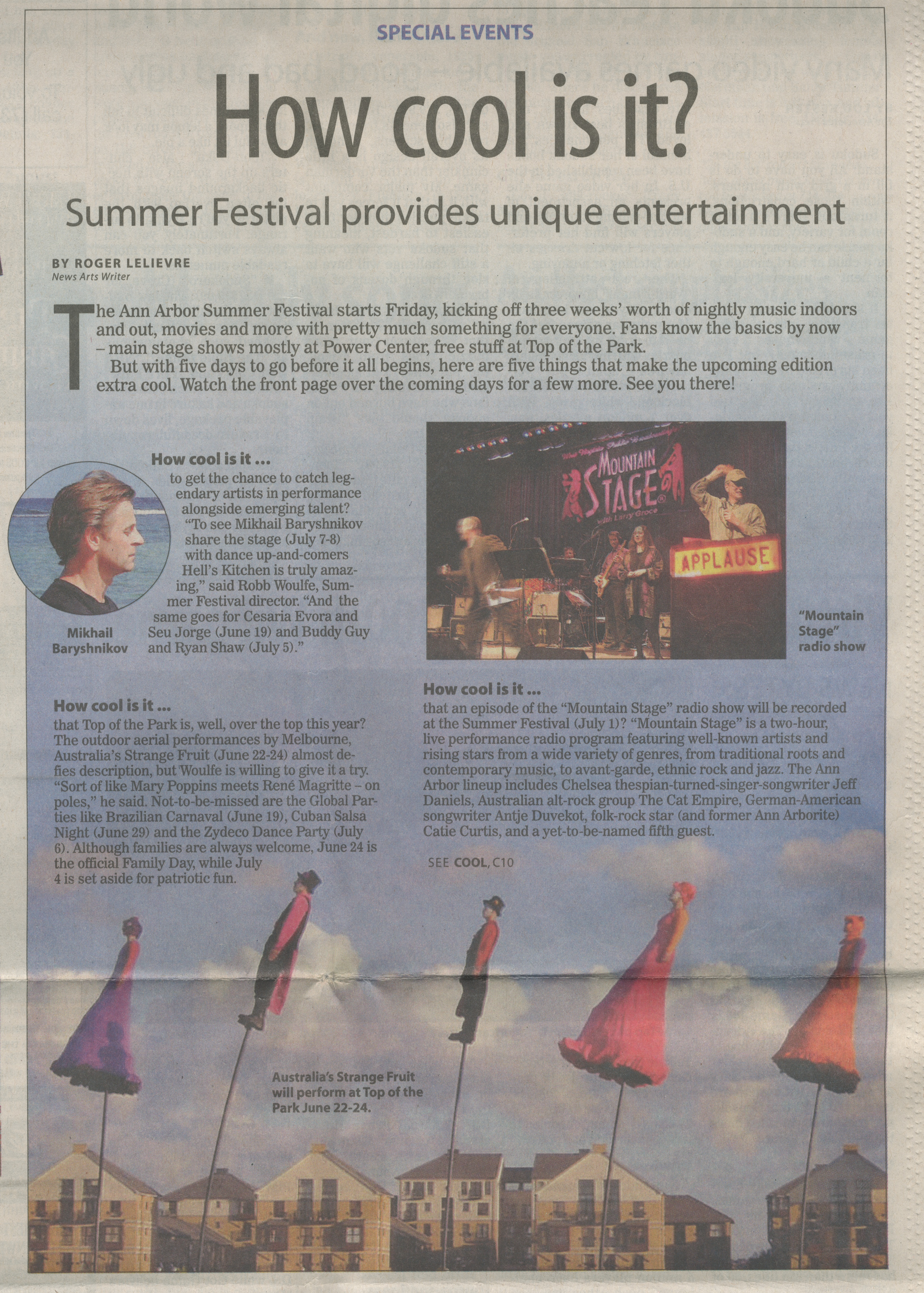 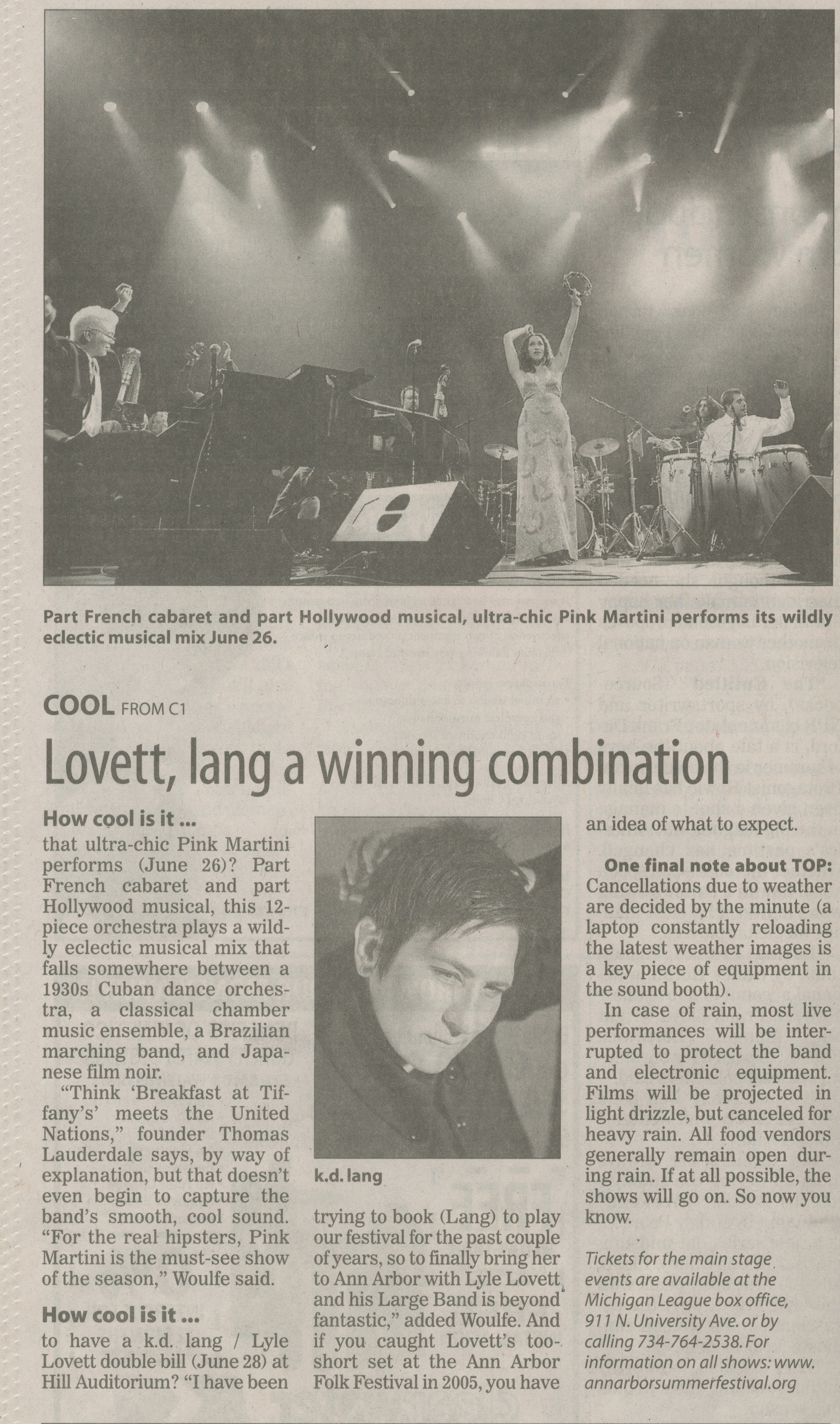 How cool is it?

The Ann Arbor Summer Festival starts Friday, kicking off three weeks’ worth of nightly music indoors and out, movies and more with pretty much something for everyone. Fans know the basics by now - main stage shows mostly at Power Center, free stuff at Top of the Park.

But with five days to go before it all begins, here are five things that make the upcoming edition extra cool. Watch the front page over the coming days for a few more. See you there!

to get the chance to catch legendary artists in performance alongside emerging talent? “To see Mikhail Baryshnikov share the stage (July 7-8) with dance up-and-comers Hell’s Kitchen is truly amazing,” said Robb Woulfe, Summer Festival director. “And the same goes for Cesaria Evora and Seu Jorge (June 19) and Buddy Guy and Ryan Shaw (July 5).”

that Top of the Park is, well, over the top this year? The outdoor aerial performances by Melbourne, Australia’s Strange Fruit (June 22-24) almost defies description, but Woulfe is willing to give it a try. “Sort of like Mary Poppins meets Rene Magritte - on poles,” he said. Not-to-be-missed are the Global Parties like Brazilian Carnaval (June 19), Cuban Salsa Night (June 29) and the Zydeco Dance Party (July 6). Although families are always welcome, June 24 is the official Family Day, while July 4 is set aside for patriotic fun.

Australia's Strange Fruit will perform at the Top of the Park June 22-24.

"Think 'Breakfast at Tiffany's' meets the United Nations," founder Thomas Lauderdale says, by way of explanation, but that doesn't even begin to capture the band's smooth, cool sound. "For the real hipsters, Pink Martini is the must-see show of the season," Woulfe said.

to have a k.d. lang/Lyle Lovett double bill (June 28) at Hill Auditorium? "I have been trying to book (Lang) to play our festival for the past couple of years, so to finally bring her to Ann Arbor with Lyle Lovett, and his Large Band is beyond fantastic," added Woulfe. And if you caught Lovett's too-short set at the Ann Arbor Folk Festival in 2005, you have an idea of what to expect.

One final note about TOP:

Cancellations due to weather are decided by the minute (a laptop constantly reloading the latest weather images is a key piece of equipment in the sound booth).

In case of rain, most live performances will be interrupted to protect the band and electronic equipment. Films will be projected in light drizzle,  but canceled for heavy rain. All food vendors generally remain open during rain. If at all possible, the shows will go on. So now you know.

Tickets for the main stage events are available at the Michigan League box office, 911 N. University Ave or by calling 734-764-2538. For information on all shows:www.annarborsummerfestival.org