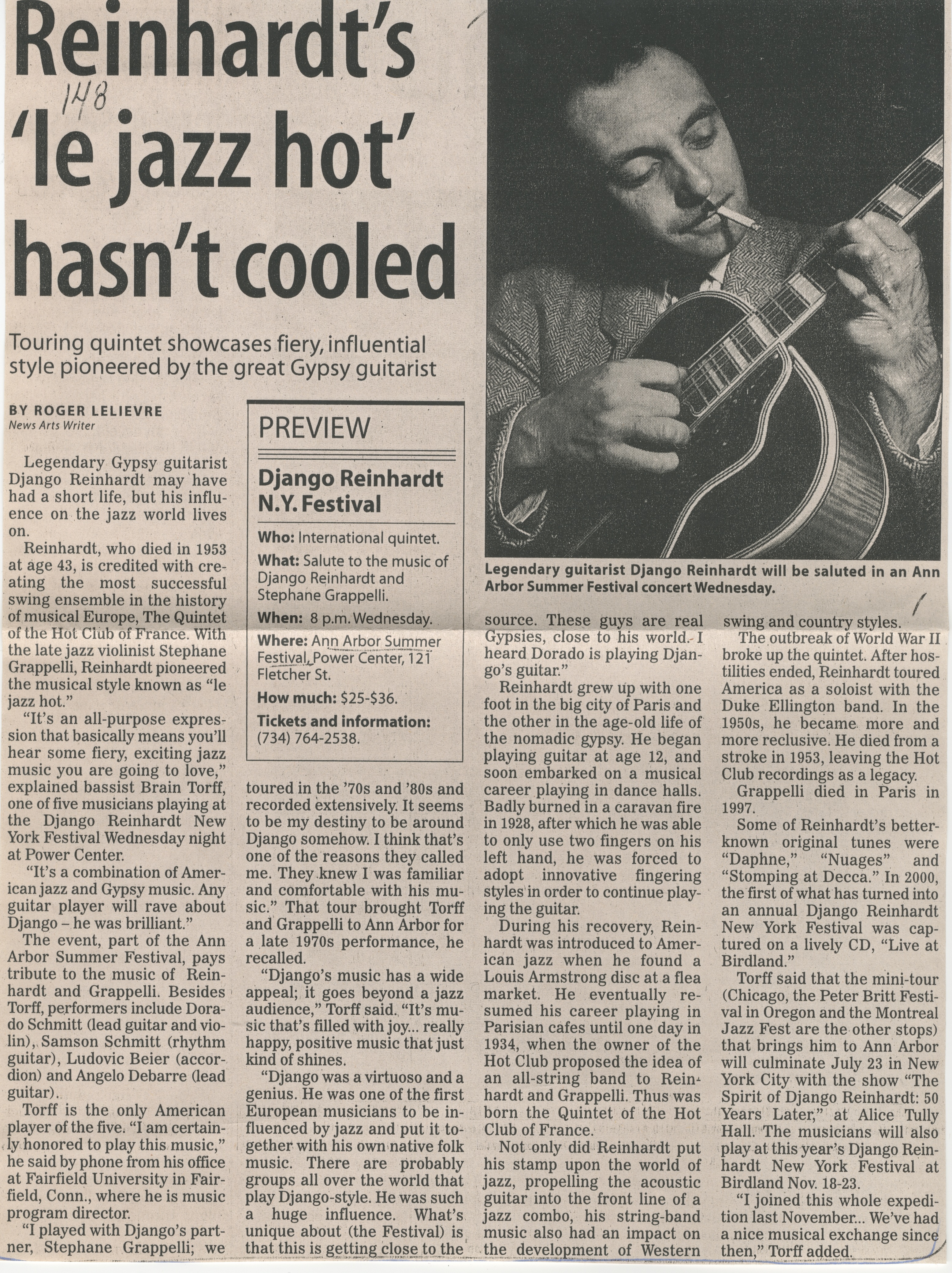 Legendary Gypsy guitarist Django Reinhardt may have had a short life, but his influence on the jazz world lives on.

Reinhardt, who died in 1953 at age 43, is credited with creating the most successful swing ensemble in the history of musical Europe, The Quintet of the Hot Club of France. With the late jazz violinist Stephane Grappelli, Reinhardt pioneered the musical style known as “le jazz hot.”

“It’s a combination of American jazz and Gypsy music. Any guitar player will rave about Django - he was brilliant.”

Torff is the only American player of the five. “I am certainly honored to play this music,” he said by phone from his office at Fairfield University in Fair-field, Conn., where he is music program director.

“I played with Django’s partner, Stephane Grappelli; we toured in the ’70s and ’80s and recorded extensively. It seems to be my destiny to be around Django somehow. I think that’s one of the reasons they called me. They knew I was familiar and comfortable with his music.” That tour brought Torff and Grappelli to Ann Arbor for a late 1970s performance, he recalled.

“Django was a virtuoso and a genius. He was one of the first European musicians to be influenced by jazz and put it together with his own native folk music. There are probably groups all over the world that play Django-style. He was such a huge influence. What’s unique about (the Festival) is that this is getting close to the source. These guys are real Gypsies, close to his world. I heard Dorado is playing Django’s guitar.”

During his recovery, Reinhardt was introduced to American jazz when he found a Louis Armstrong disc at a flea market. He eventually resumed his career playing in Parisian cafes until one day in 1934, when the owner of the Hot Club proposed the idea of an all-string band to Reinhardt and Grappelli. Thus was born the Quintet of the Hot Club of France.

Not only did Reinhardt put his stamp upon the world of jazz, propelling the acoustic guitar into the front line of a jazz combo, his string-band music also had an impact on the development of Western swing and country styles.

The outbreak of World War II broke up the quintet. After hostilities ended, Reinhardt toured America as a soloist with the Duke Ellington band. In the 1950s, he became more and more reclusive. He died from a stroke in 1953, leaving the Hot Club recordings as a legacy.

Some of Reinhardt’s better-known original tunes were “Daphne,” “Nuages” and “Stomping at Decca.” In 2000, the first of what has turned into an annual Django Reinhardt New York Festival was captured on a lively CD, “Live at Birdland.”

Torff said that the mini-tour (Chicago, the Peter Britt Festival in Oregon and the Montreal Jazz Fest are the other stops) that brings him to Ann Arbor will culminate July 23 in New York City with the show “The Spirit of Django Reinhardt: 50 Years Later,” at Alice Tully Hall. The musicians will also play at this year’s Django Reinhardt New York Festival at Birdland Nov. 18-23.

“I joined this whole expedition last November... We’ve had a nice musical exchange since then,” Torff added.

What: Salute to the music of Django Reinhardt and Stephane Grappelli.