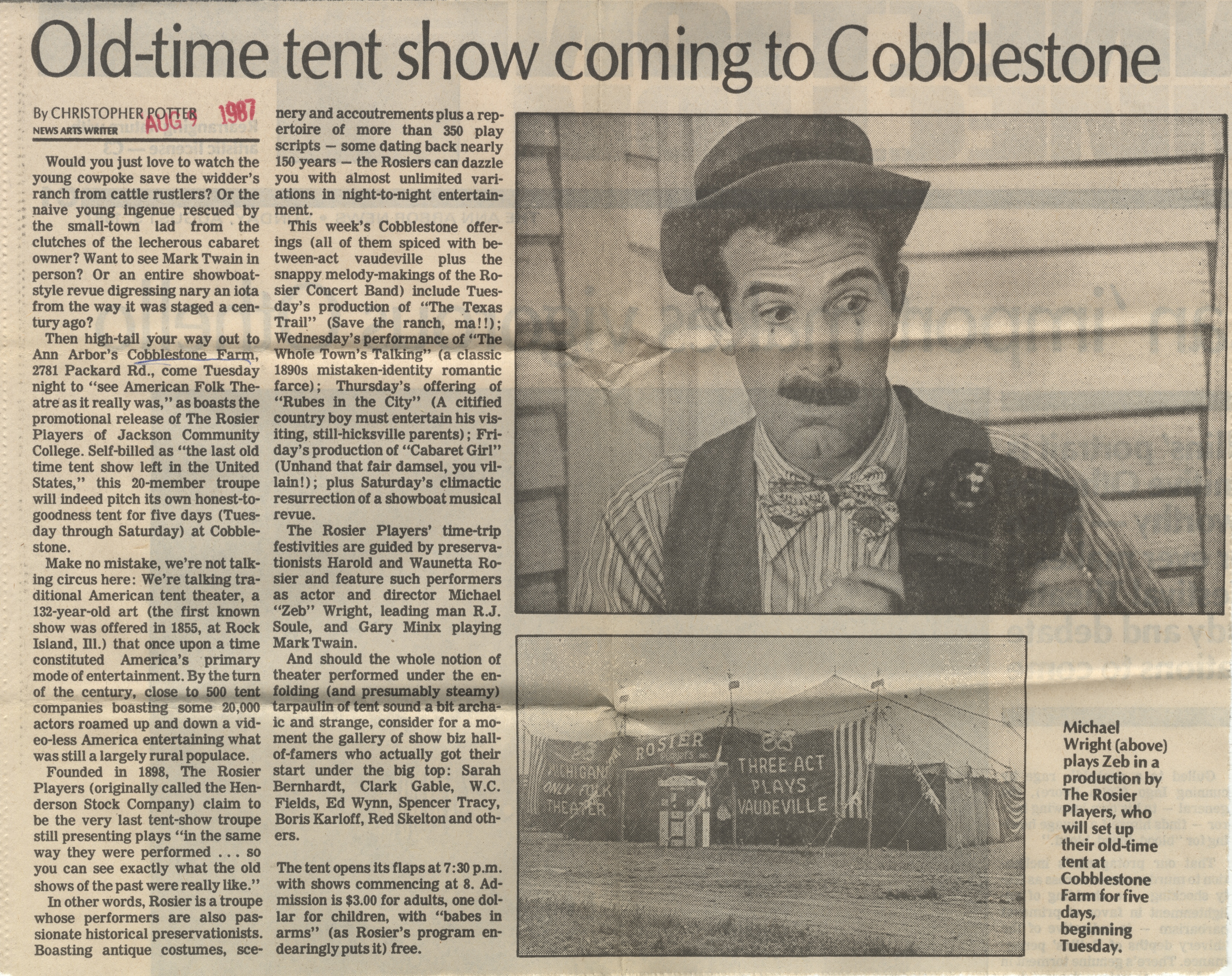 Would you just love to watch the young cowpoke save the widder’s ranch from cattle rustlers? Or the naive young ingenue rescued by the small-town lad from the clutches of the lecherous cabaret owner? Want to see Mark Twain in person? Or an entire showboat-style revue digressing nary an iota from the way it was staged a century ago?

Then high-tail your way out to Ann Arbor’s Cobblestone Farm, 2781 Packard Rd., come Tuesday night to “see American Folk Theatre as it really was,” as boasts the promotional release of The Rosier Players of Jackson Community College. Self-billed as “the last old time tent show left in the United States,” this 20-member troupe will indeed pitch its own honest-to-goodness tent for five days (Tuesday through Saturday) at Cobblestone.

Make no mistake, we’re not talking circus here: We’re talking traditional American tent theater, a 132-year-old art (the first known show was offered in 1855, at Rock Island, Ill.) that once upon a time constituted America’s primary mode of entertainment. By the turn of the century, close to 500 tent companies boasting some 20,000 actors roamed up and down a video-less America entertaining what was still a largely rural populace.

Founded in 1898, The Rosier Players (originally called the Henderson Stock Company) claim to be the very last tent-show troupe still presenting plays “in the same way they were performed ... so you can see exactly what the old shows of the past were really like.”

In other words, Rosier is a troupe whose performers are also passionate historical preservationists. Boasting antique costumes, scenery and accoutrements plus a repertoire of more than 350 play scripts - some dating back nearly 150 years - the Rosiers can dazzle you with almost unlimited variations in night-to-night entertainment.

This week’s Cobblestone offerings (all of them spiced with between-act vaudeville plus the snappy melody-makings of the Rosier Concert Band) include Tuesday’s production of “The Texas Trail” (Save the ranch, ma!!); Wednesday’s performance of “The Whole Town’s Talking” (a classic 1890s mistaken-identity romantic farce); Thursday’s offering of “Rubes in the City” (A citified country boy must entertain his visiting, still-hicksville parents); Friday’s production of “Cabaret Girl” (Unhand that fair damsel, you villain!); plus Saturday’s climactic resurrection of a showboat musical revue.

And should the whole notion of theater performed under the enfolding (and presumably steamy) tarpaulin of tent sound a bit archaic and strange, consider for a moment the gallery of show biz hall-of-famers who actually got their start under the big top: Sarah Bernhardt, Clark Gable, W.C. Fields, Ed Wynn, Spencer Tracy, Boris Karloff, Red Skelton and others.

The tent opens its flaps at 7:30 p.m. with shows commencing at 8. Admission is $3.00 for adults, one dollar for children, with “babes in arms” (as Hosier's program endearingly puts it) free.

Michael Wright (above) plays Zeb in a production by The Rosier Players, who will set up their old-time tent at Cobblestone Farm for five days, beginning Tuesday.