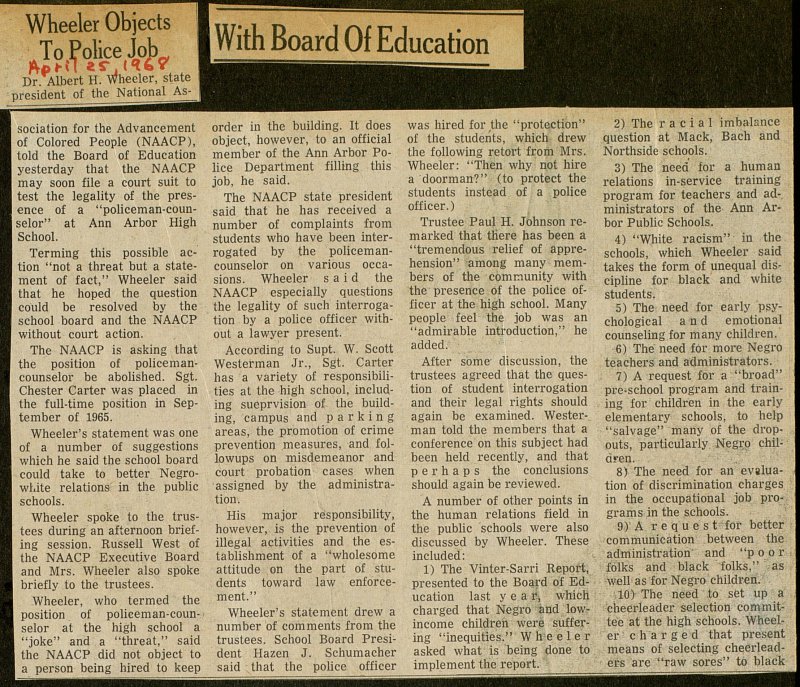 Dr Ubert H. Wheeler, state resident of the National sociation for the Advancement of Colored People (NAACP), told the Board of Education yesterday that the NAACP may soon file a court suit to test the legality of the presence of a "policeman-counselor" at Ann Arbor High School. Terming this possible action "not a threat but a statement of fact," Wheeler said that he hoped the question could be resolved by the school board and the NAACP without court action. The NAACP is asking that the position of policemancounselor be abolished. Sgt. Chester Carter was placed in the full-time position in September of 1965. Wheeler's statement was one of a number of suggestions which he said the school board could take to better Negrowhite relations in the public schools. Wheeler spoke to the trustees during an afternoon briefing session. Russell West of the NAACP Executive Board and Mrs. Wheeler also spoke brief ly to the trustees. Wheeler, who termed the position of policeman-eounselor at the high school a "joke" and a "threat," said the NAACP did not object to a person being hired to keep order in the building. It does object, however, to an official member of the Ann Arbor Police Department filling this job, he said. The NAACP state president said that he has received a number of complaints from students who have been interrogated by the policemancounselor on various occasions. Wheeler said the NAACP especially questions the legality of such interrogation by a pólice officer without a lawyer present. According to Supt. W. Scott Westerman Jr., Sgt. Carter has a variety of responsibilities at the high school, including sueprvision of the building, campus and parking areas, the promotion of crime prevention measures, and followups on misdemeanor and court probation cases when assigned by the administration. His major responsibility, however, is the prevention of illegal activities and the establishment of a "wholesome attitude on the part of students toward law enforcement." Wheeler's statement drew a number of comments from the trustees. School Board President Hazen J. Schumacher said that the pólice officer was hired for the "protection" of the students, which drew the following retort from Mrs. Wheeler: "Then why not hire a doorman?" (to protect the students instead of a pólice officer.) Trustee Paul H. Johnson rein arked that th'ere has been a "tremendous relief of apprehension" among many members of the community with the presence of the pólice officer at the high school. Many people feel the job was an "admirable introduction," he added. After discussion, the trustees agreed that the question of student interrogation and their legal rights should again be examined. Wester-, man told the members that a conference on this subject had been held recently, and that perhaps the conclusions should again be reviewed. A number of other points in the human relations field in the public schools were also discussed by Wheeler. These included: 1) The Vinter-Sarri Report, presented to the Board of Education last yeat, which charged that Negro ánd lowincome children weré suffering "inequities." Wheeler asked what is being done to implement the report. 2) The racial imbalance question at Mack, Bach and Northside schools. 3) The need for a human relations in-service training program for teachers and administrators of the Ann Arbor Public Schools. 4) "White racism" in the schools, which Wheeler said takes the form of unequal discipline for black and white students 5) The need for early psychological and emotional counseling for many children.' 6) Thé need for more Negro teachers and administrators. 7) A request for a "broad" pre-school program and training for children in the early elementary schools, to help "salvage" many of the dropouts, particularly Negro children. 8) The need for an evaluation of discrimination charges in the occupational job programs in the schools. 9) A repes t "for better communication between the administration' and "p o o r folks and black folks," as well as for Negro children. 10) The need to set up a cheerleader selection committee at the high schools. Wheeler charged that present means of selecting cheerleaders are "raw sores" tó black