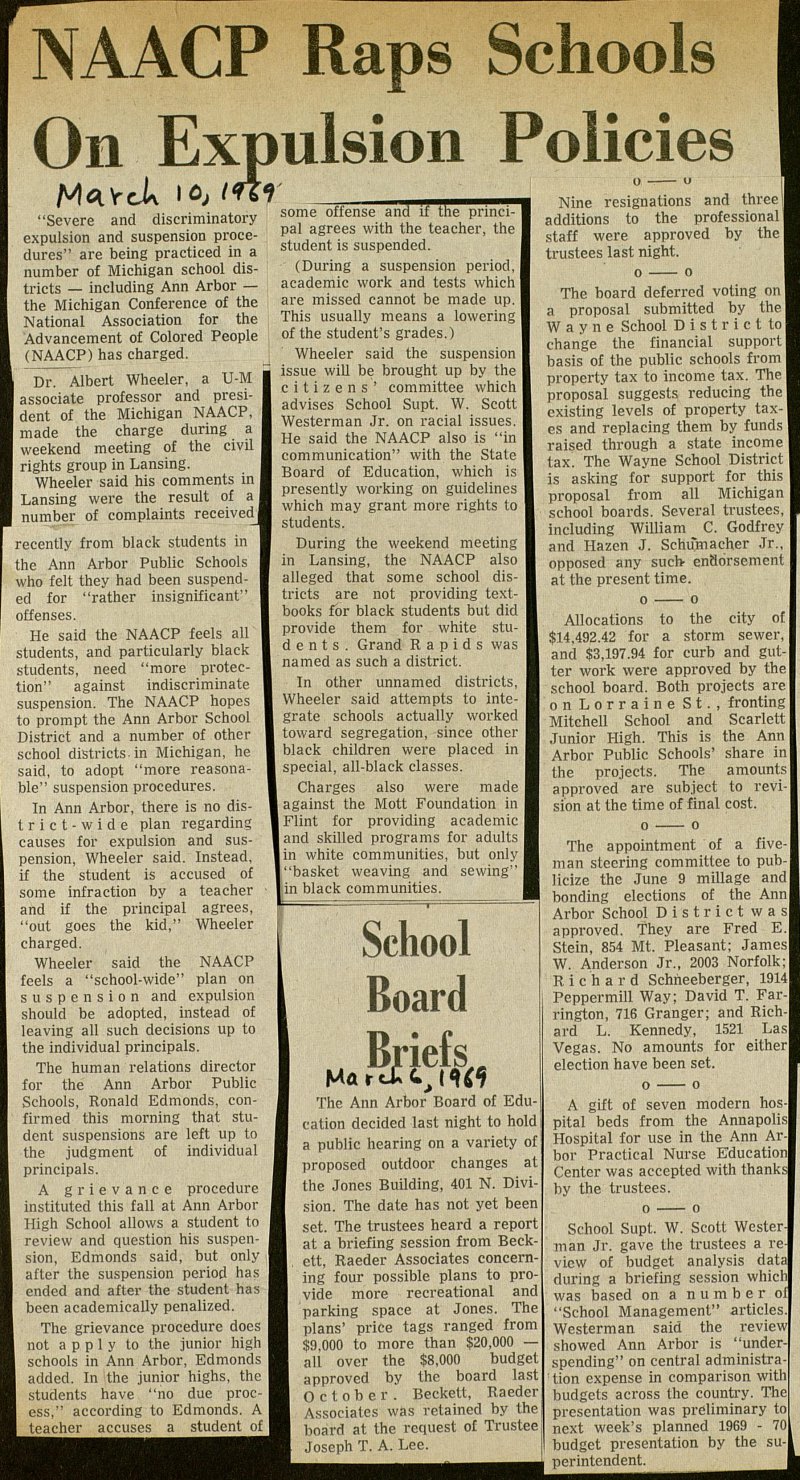 "Severe and discriminatory expulsión and suspension procedures" are being practiced in a number of Michigan school districts - including Ann Arbor - the Michigan Conference of the National Association for the Advancement of Colored People (NAACP) has charged. Dr. Albert Wheeler, a U-M associate professor and president of the Michigan NAACP, made the charge during a weekend meeting of the civil rights group in Lansing. Wheeler said his comments in Lansing were the result of a I number of complaints receivedj recently from black students in the Ann Arbor Public Schools who feit they had been suspended for "rather insignificant" offenses. He said the NAACP feels all students, and particularly black students, need "more protection" against indiscriminate suspension. The NAACP hopes to prompt the Ann Arbor School District and a number of other school districtsin Michigan, he said, to adopt "more reasonable" suspension procedures. In Ann Arbor, there is no dist r i c t - w i d e plan regarding causes for expulsión and suspension, Wheeler said. Instead, if the student is accused of some infraction by a teacher and if the principal agrees, "out goes the kid," Wheeler charged. Wheeler said the NAACP feels a "school-wide" plan on suspension and expulsión should be adopted, instead of leaving all such decisions up to the individual principáis. The human relations director for the Ann Arbor Public Schools, Ronald Edmonds, confirmed this morning that student suspensions are left up to the judgment of individual principáis. A grievance procedure instituted this fall at Ann Arbor High School allows a student to review and question his suspension, Edmonds said, but only alter the suspension period has ended and after the student has been academically penalized. The grievance procedure does not a p p 1 y to the junior high schools in Ann Arbor, Edmonds added. In the junior highs, the students have "no due process," according to Edmonds. A teacher accuses a student of some offense and ïf the principal agrees with the teacher, the student is suspended. (During a suspension period, academie work and tests which are missed cannot be made up. This usually means a lowering of the student's grades.) Wheeler said the suspension issue will be brought up by the c i t i z e n s ' committee which advises School Supt. W. Scott Westerman Jr. on racial issues. He said the NAACP also is "in communication" with the State Board of Education, which is presently working on guidelines which may grant more rights to students. During the weekend meeting in Lansing, the NAACP also alleged that some school districts are not providing textbooks for black students but did provide them for white stud e n t s . Grand Eapids was named as such a district. In other unnamed districts, Wheeler said attempts to intégrate schools actually worked toward segregation, since other black children were placed in special, all-black classes. Charges also were made I against the Mott Foundation in Flint for providing academie land skilied programs for adults I in white communities, but only I "basket weaving and sewing" lin black communities. Nine resignations and threel additions to the professional staff were approved by the trustees last night. o o The board deferred voting on a proposal submitted by the Wayne School D i s t r i c t to change the financial support basis of the public schools from property tax to income tax. The proposal suggests reducing the existing levéis of property taxes and replacing them by funds raised through a state income tax. The Wayne School District is asking for support for this proposal from all Michigan school boards. Several trustees, including William C. Godfrey and Hazen J. Schumacher Jr., opposed any enHórsement at the present time. o o Allocations to the city of $14,492.42 for a storm sewer, and $3,197.94 for curb and gutter work were approved by the school board. Both projects are onLorraineSt., fronting Mitchell School and Scarlett Junior High. This is the Ann Arbor Public Schools' share in the projects. The amounts approved are subject to revisión at the time of final cost. o o The appointment of a fiveman steering committee to publicize the June 9 millage and bonding elections of the Ann Arbor School District was approved. They are Fred E. Stein, 854 Mt. Pleasant; James W. Anderson Jr., 2003 Norfolk; Richard Schñeeberger, 1914 Peppermill Way; David T. Farrington, 716 Granger; and Richard L. Kennedy, 1521 Las Vegas. No amounts for either election have been set. o o A gift of seven modern hospital beds from the Annapolis Hospital for use in the Ann Arbor Practical Nurse Edueation Center was accepted with thanks by the trustees. o o School Supt. W. Scott Westerman Jr. gave the trustees a review of budget analysis data during a briefing session which was based on a number oi "School Management" articles. Westerman said the review showed Ann Arbor is "underspending" on central administration expense in comparison with budgets across the country. The presentaüon was pröliminary to next week's planned 1969 - 70 budget presentation by the superintendent.