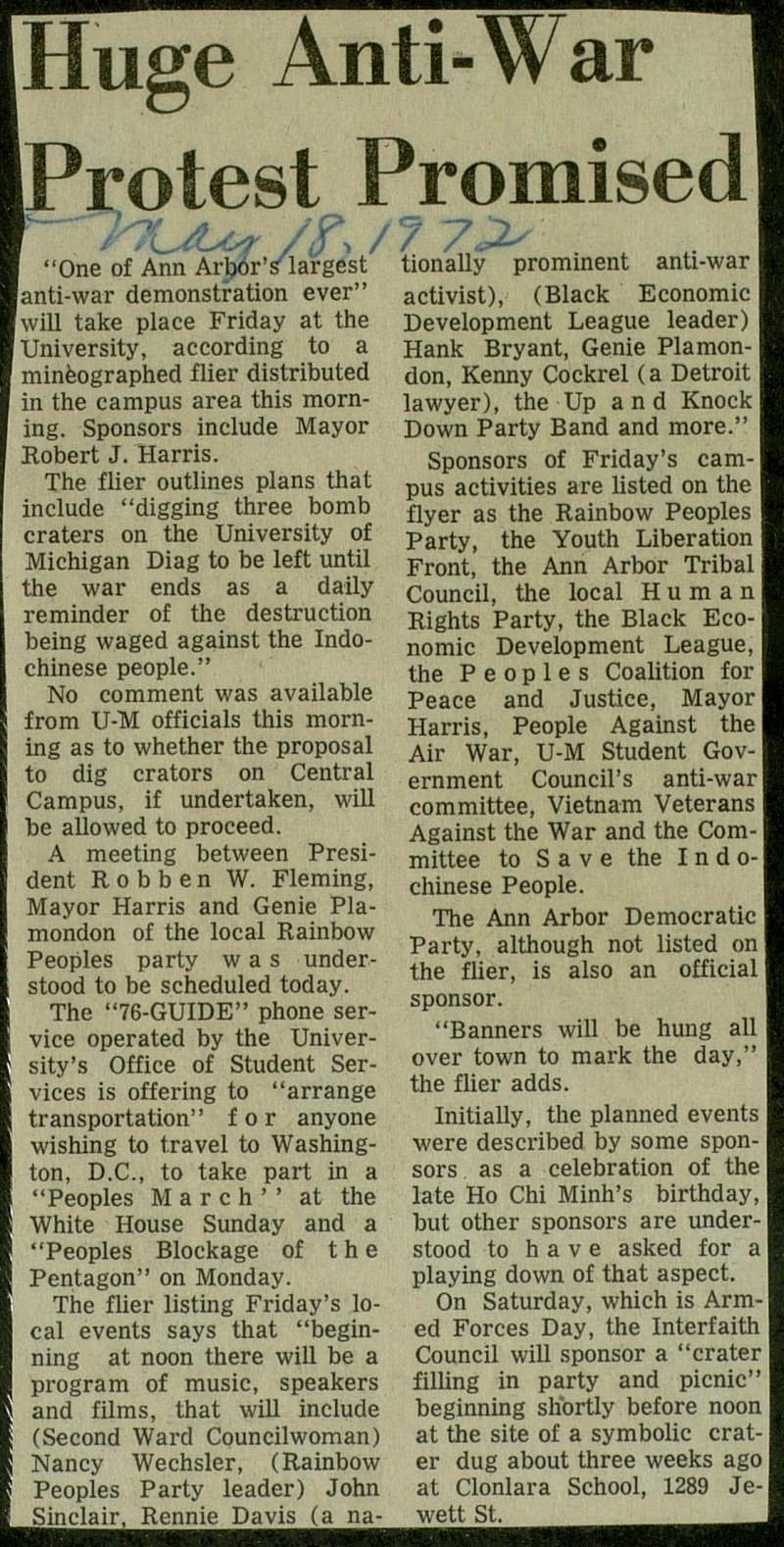 í "One of Ann Arjjor'largest anti-war demonstration ever" will take place Friday at the University, according to a minèographed flier distributed in the campus area this morning. Sponsors include Mayor Robert J. Harris. The flier outlines plans that include "digging three bomb craters on the University of Michigan Diag to be left until the war ends as a daily reminder of the destruction being waged against the Indochinese people." No comment was available f rom U-M officials this morning as to whether the proposal to dig erators on Central Campus, if undertaken, will be aüowed to proceed. A meeting between President Robben W. Fleming, Mayor Harris and Genie Plamondon of the local Rainbow Peoples party was understood to be scheduled today. The "76-GUIDE" phone service operated by the University's Office of Student Services is offering to "arrange transportation" for anyone wishing to travel to Washington, D.C., to take part in a "Peoples M a r c h ' ' at the White House Sunday and a "Peoples Blockage of the Pentagon" on Monday. The flier listing Friday's local events says that "beginning at noon there will be a program of music, speakers and films, that will include (Second Ward Councilwoman) Nancy Wechsler, (Rainbow Peoples Party leader) John Sinclair, Rennie Davis (a tionally prominent anti-war I activist), (Black Economie I Development League leader) I Hank Bryant, Genie 1 don, Kenny Cockrel ( a Detroit I lawyer), the Up and Knockl Down Party Band and more." Sponsors of Friday's cam-l pus activities are listed on the I flyer as the Rainbow Peoples I Party, the Youth Liberation I Front, the Ann Arbor Tribal! Council, the local Human! Rights Party, the Black 1 nomic Development League, I the Peoples Coalition for I Peace and Justice, Mayor I Harris, People Against the I Air War, U-M Student Gov-I ernment Council's anti-war I committee, Vietnam Veterans I Against the War and the 1 mittee to Save the I n d 1 chinese People. The Ann Arbor Democratie Party, although not listed onj the hier, is also an official sponsor. "Banners will be hung all over town to mark the day," the flier adds. Initially, the planned events were described by some sponsors as a celebration of the late Ho Chi Minh's birthday, but other sponsors are understood to have asked for a playing down of that aspect. On Saturday, which is Armed Forces Day, the Interfaith Council will sponsor a "cráter filling in party and picnic" beginning shbrtly before noon at the site of a symbolic crater dug about three weeks ago at Clonlara School, 1289 Je-I wett St.