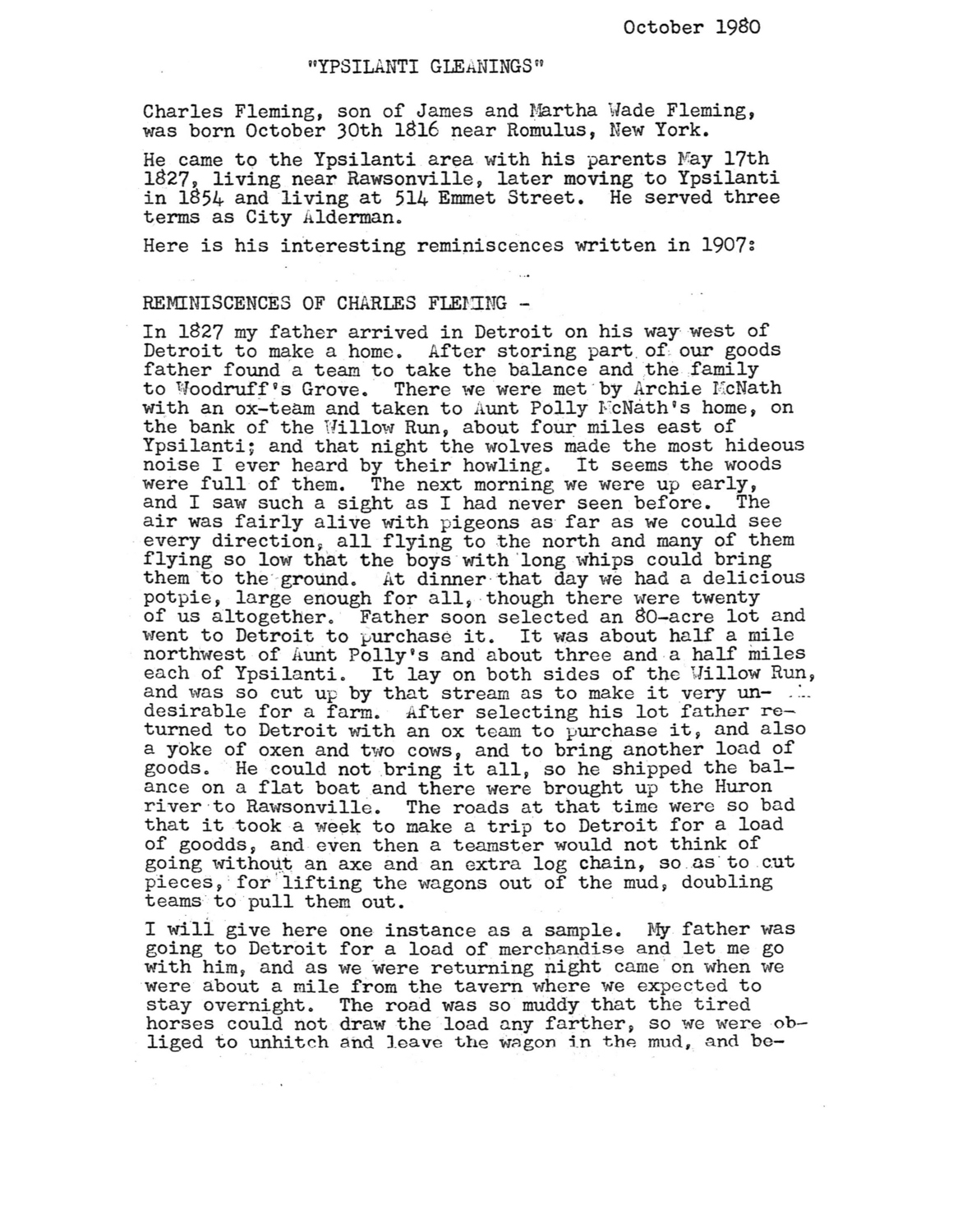 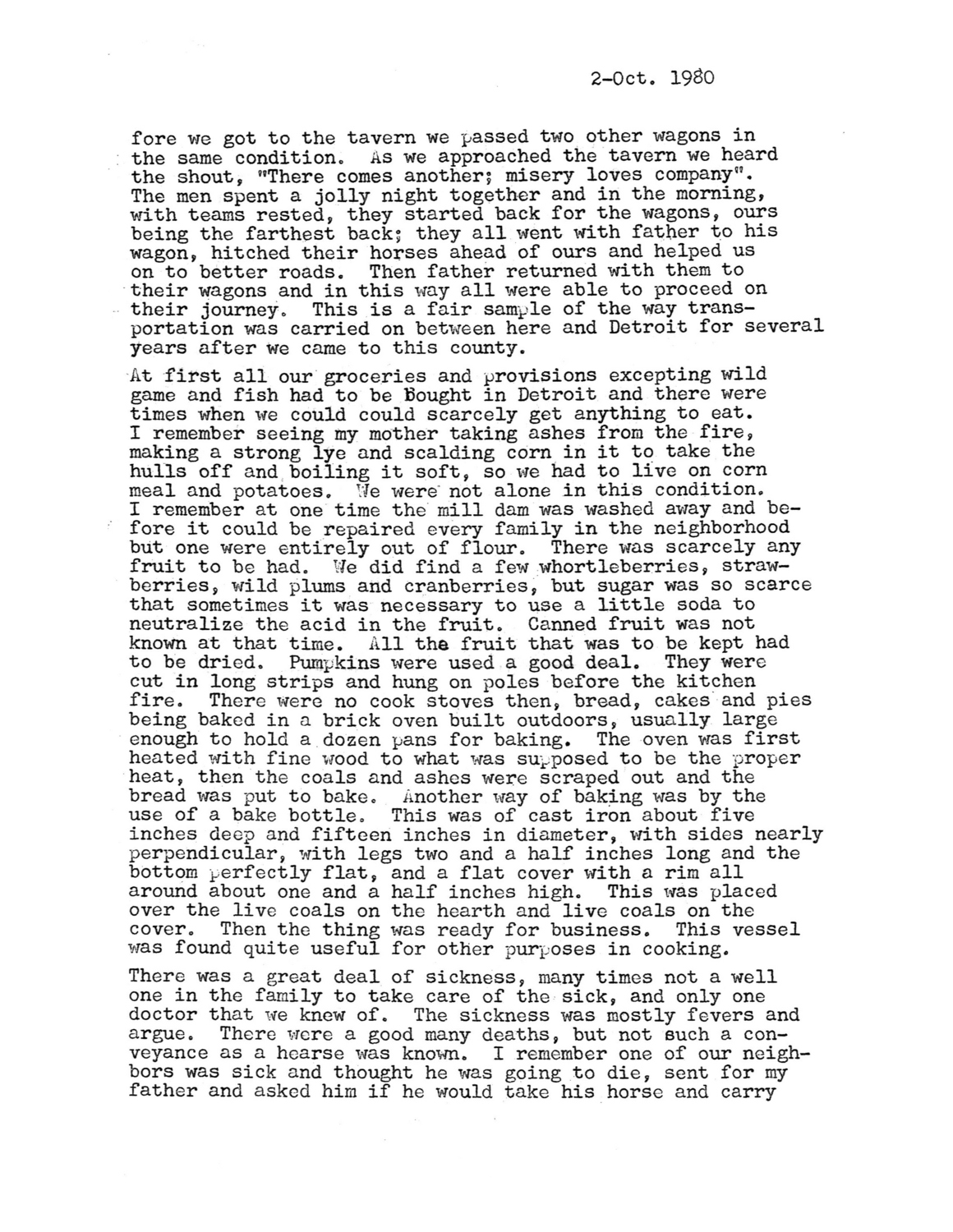 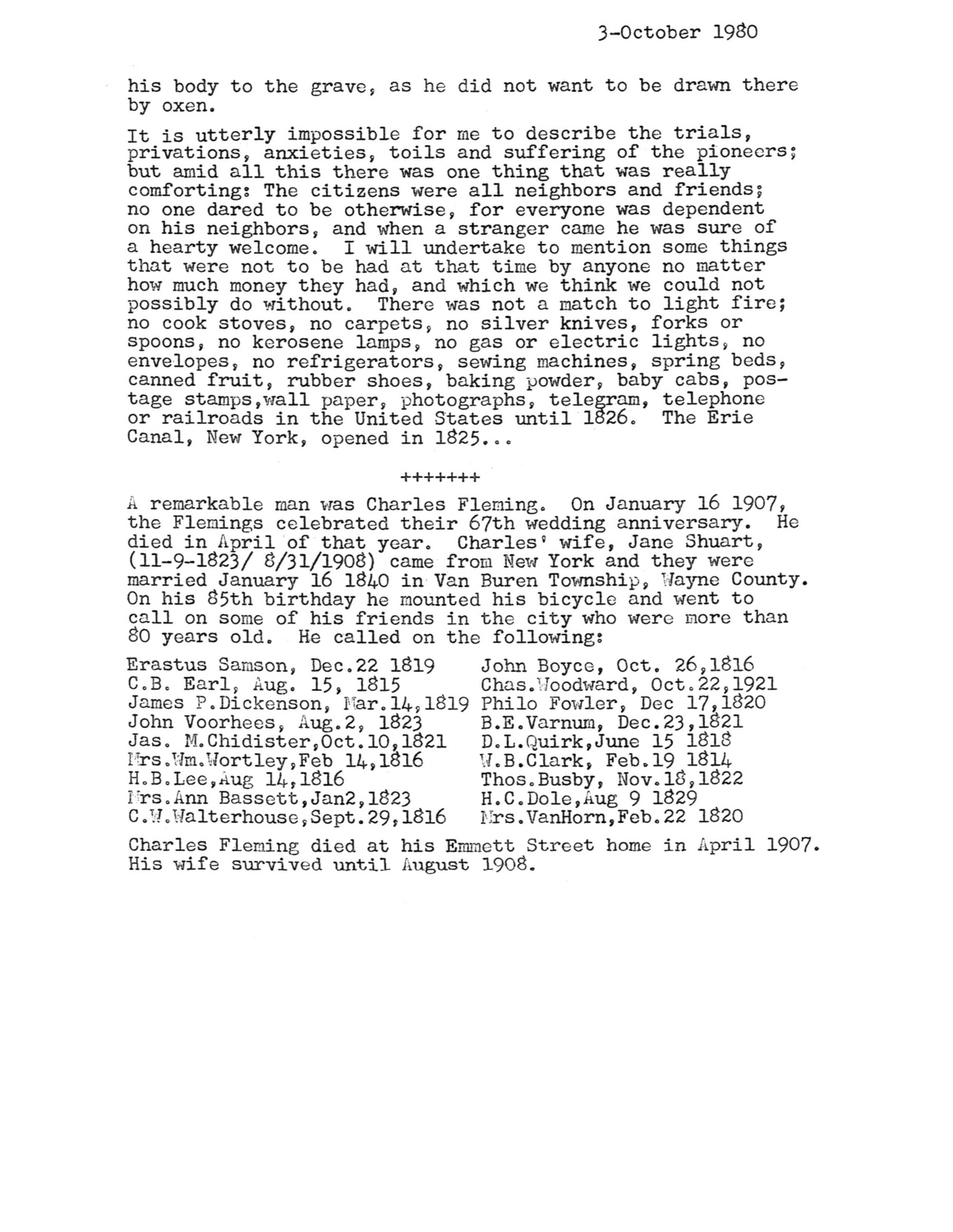 He came to the Ypsilanti area with his parents May 17th 1827, living near Rawsonville, later moving to Ypsilanti in 1854 and living at 514 Emmet Street. He served three terms as City alderman.

Here is his interesting reminiscences written in 1907:

In 1827 my father arrived in Detroit on his way west of Detroit to make a home. After storing part of our goods father found a team to take the balance and the family to Woodruff's Grove. There we were met by Archie McNath with an ox-team and taken to Aunt Polly McNath's home, on the bank of the Willow Run, about four miles east of Ypsilanti; and that night the wolves made the most hideous noise I ever heard by their howling. It seems the woods were full of them. The next morning we were up early, and I saw such a sight as I had never seen before. The air was fairly alive with pigeons as far as we could see every direction, all flying to the north and many of them flying so low that the boys with long whips could bring them to the ground. At dinner that day we had a delicious potpie, large enough for all, though there were twenty of us altogether. Father soon selected an 80-acre lot and went to Detroit to purchase it. It was about half a mile northwest of Aunt Polly's and about three and a half miles each of Ypsilanti. It lay on both sides of the Willow Run, and was so cut up by that stream as to make it very undesirable for a farm. After selecting his lot father returned to Detroit with an ox team to purchase it, and also a yoke of oxen and two cows, and to bring another load of goods. He could not bring it all, so he shipped the balance on a flat boat and there were brought up the Huron river to Rawsonville. The roads at that time were so bad that it took a week to make a trip to Detroit for a load of goodds, and even then a teamster would not think of going without an axe and an extra log chain, so as to cut pieces, for lifting the wagons out of the mud, doubling teams to pull them out.

I will give here one instance as a sample. My father was going to Detroit for a load of merchandise and let me go with him, and as we were returning night came on when we were about a mile from the tavern where we expected to stay overnight. The road was so muddy that the tired horses could not draw the load any farther, so we were obliged to unhitch and leave the wagon in the mud, and before we got to the tavern we passed two other wagons in the same condition. As we approached the tavern we heard the shout, “There comes another; misery loves company”. The men spent a jolly night together and in the morning, with teams rested, they started back for the wagons, ours being the farthest back; they all went with father to his wagon, hitched their horses ahead of ours and helped us on to better roads. Then father returned with them to their wagons and in this way all were able to proceed on their journey. This is a fair sample of the way transportation was carried on between here and Detroit for several years after we came to this county.

At first all our groceries and provisions excepting wild game and fish had to be Bought in Detroit and there were times when we could could scarcely get anything to eat. I remember seeing my mother taking ashes from the fire, making a strong lye and scalding corn in it to take the hulls off and boiling it soft, so we had to live on corn meal and potatoes. We were not alone in this condition. I remember at one time the mill dam was washed away and before it could be repaired every family in the neighborhood but one were entirely out of flour. There was scarcely any fruit to be had. We did find a few whortleberries, strawberries, wild plums and cranberries, but sugar was so scarce that sometimes it was necessary to use a little soda to neutralize the acid in the fruit. Canned fruit was not known at that time. All the fruit that was to be kept had to be dried. Pumpkins were used a good deal. They were cut in long strips and hung on poles before the kitchen fire. There were no cook stoves then, bread, cakes and pies being baked in a brick oven built outdoors, usually large enough to hold a dozen pans for baking. The oven was first heated with fine wood to what was supposed to be the proper heat, then the coals and ashes were scraped out and the bread was put to bake. Another way of baking was by the use of a bake bottle. This was of cast iron about five inches deep and fifteen inches in diameter, with sides nearly perpendicular, with legs two and a half inches long and the bottom perfectly flat, and a flat cover with a rim all around about one and a half inches high. This was placed over the live coals on the hearth and live coals on the cover. Then the thing was ready for business. This vessel was found quite useful for other purposes in cooking.

There was a great deal of sickness, many times not a well one in the family to take care of the sick, and only one doctor that we knew of. The sickness was mostly fevers and argue. There were a good many deaths, but not such a conveyance as a hearse was known. I remember one of our neighbors was sick and thought he was going to die, sent for my father and asked him if he would take his horse and carry his body to the grave, as he did not want to be drawn there by oxen.

It is utterly impossible for me to describe the trials, privations, anxieties, toils and suffering of the pioneers; but amid all this there was one thing that was really comforting: The citizens were all neighbors and friends; no one dared to be otherwise, for everyone was dependent on his neighbors, and when a stranger came he was sure of a hearty welcome. I will undertake to mention some things that were not to be had at that time by anyone no matter how much money they had, and which we think we could not possibly do without. There was not a match to light fire; no cook stoves, no carpets, no silver knives, forks or spoons, no kerosene lamps, no gas or electric lights, no envelopes, no refrigerators, sewing machines, spring beds, canned fruit, rubber shoes, baking powder, baby cabs, postage stamps, wall paper, photographs, telegram, telephone or railroads in the United States until 1826. The Erie Canal, New York, opened in 1825…

A remarkable man was Charles Fleming. On January 16 1907, the Flemings celebrated their 67th wedding anniversary. He died in April of that year. Charles' wife, Jane Shuart, (11-9-1823/ 8/31/1908) came from New York and they were married January 16 1840 in Van Buren Township, Wayne County. On his 85th birthday he mounted his bicycle and went to call on some of his friends in the city who were more than 80 years old. He called on the following:


Charles Fleming died at his Emmett Street home in April 1907. His wife survived until August 1908.