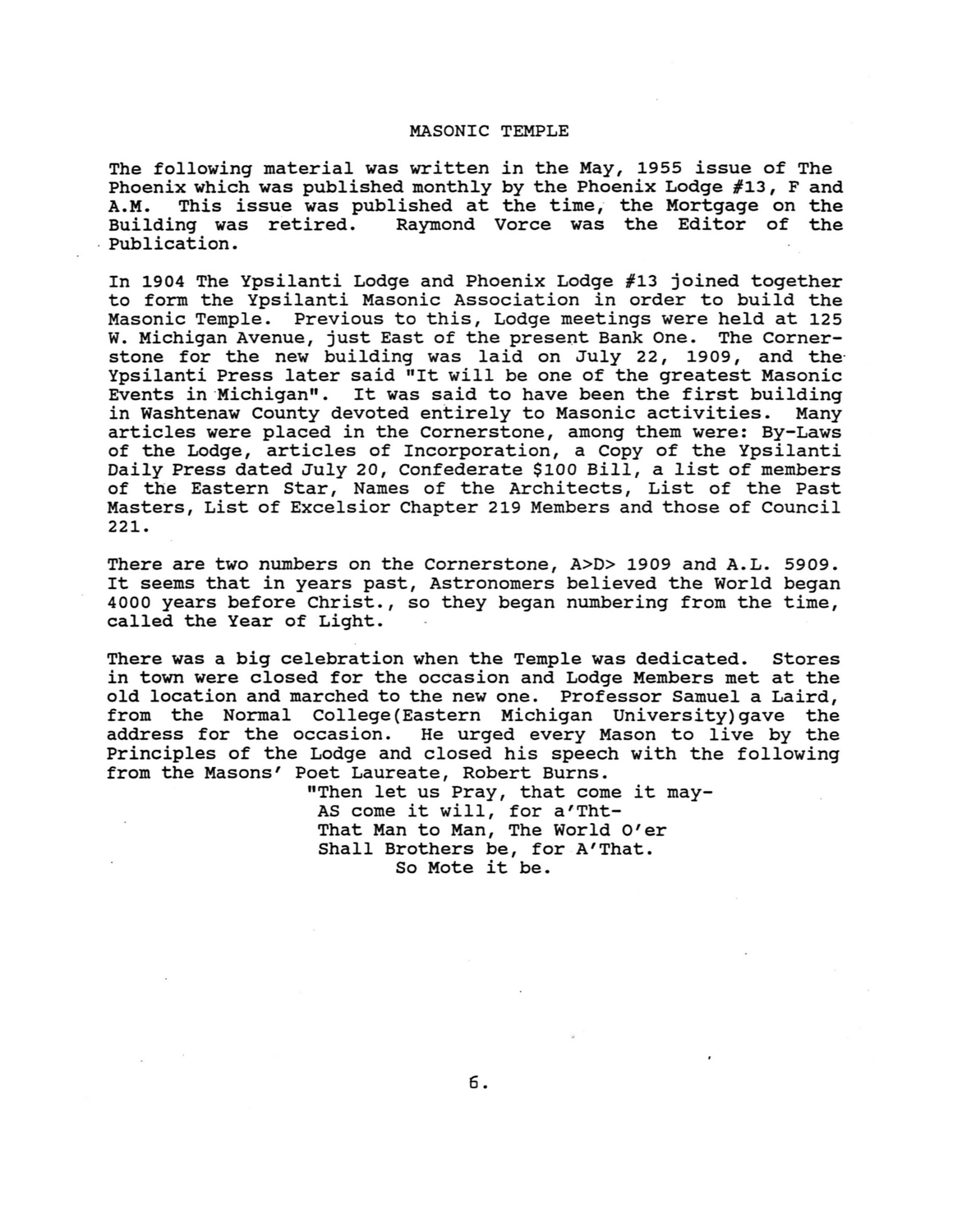 The following material was written in the May, 1955 issue of The Phoenix which was published monthly by the Phoenix Lodge #13, F and A.M. This issue was published at the time, the Mortgage on the Building was retired. Raymond Vorce was the Editor of the Publication.

In 1904 The Ypsilanti Lodge and Phoenix Lodge #13 joined together to form the Ypsilanti Masonic Association in order to build the Masonic Temple. Previous to this, Lodge meetings were held at 125 W. Michigan Avenue, just East of the present Bank One. The Cornerstone for the new building was laid on July 22, 1909, and the Ypsilanti Press later said “It will be one of the greatest Masonic Events in Michigan”. It was said to have been the first building in Washtenaw County devoted entirely to Masonic activities. Many articles were placed in the Cornerstone, among them were: By-Laws of the Lodge, articles of Incorporation, a Copy of the Ypsilanti Daily Press dated July 20, Confederate &dollar;100 Bill, a list of members of the Eastern Star, Names of the Architects, List of the Past Masters, List of Excelsior Chapter 219 Members and those of Council 221.

There are two numbers on the Cornerstone, A.D. 1909 and A.L. 5909. It seems that in years past, Astronomers believed the World began 4000 years before Christ., so they began numbering from the time, called the Year of Light.

There was a big celebration when the Temple was dedicated. Stores in town were closed for the occasion and Lodge Members met at the old location and marched to the new one. Professor Samuel a Laird, from the Normal College (Eastern Michigan University) gave the address for the occasion. He urged every Mason to live by the Principles of the Lodge and closed his speech with the following from the Masons' Poet Laureate, Robert Burns.

“Then let us Pray, that come it may-AS come it will, for a'Tht-That Man to Man, The World O'er Shall Brothers be, for A'That. So Mote it be.