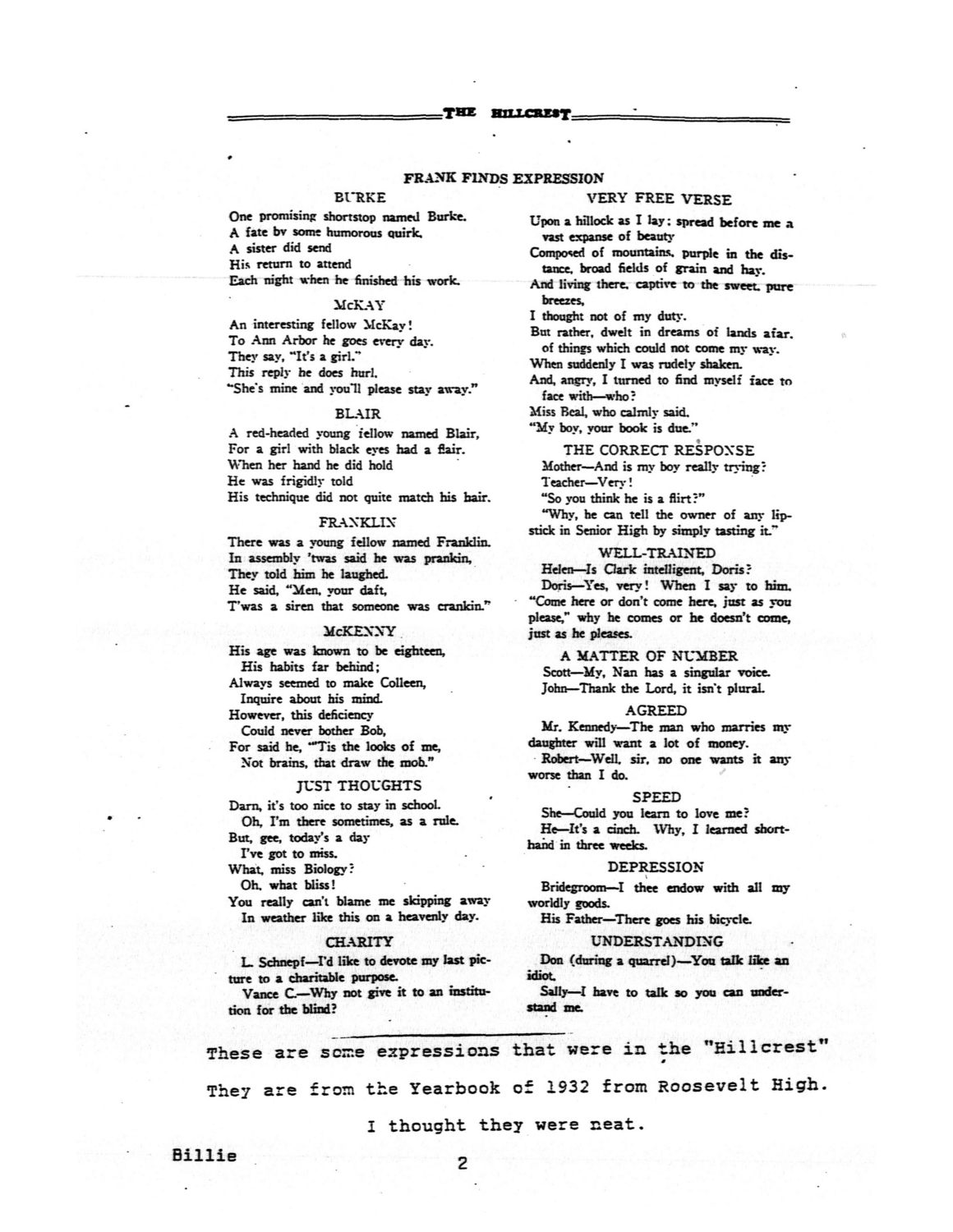 A fate by some humorous quirk.

A sister did send

His return to attend

Each night when he finished his work.

To Ann Arbor he goes every day.

This reply he does hurl.

“She's mine and you'll please stay away.”

For a girl with black eyes had a flair.

When her hand he did hold

He was frigidly told

His technique did not quite match his hair.

There was a young fellow named Franklin.

In assembly ‘was said he was prankin,

They told him he laughed.

T'was a siren that someone was crankin.”

His age was known to be eighteen,

His habits far behind;

Inquire about his mind.

For said he, “Tis the looks of me,

Not brains, that draw the mob.”

Darn, it's too nice to stay in school.

Oh, I'm there sometimes, as a rule.

I've got to miss.

You really can't blame me skipping away

L. Schnepf—I'd like to devote my last picture to a charitable purpose.

Vance C.—Why not give it to an institution for the blind?

Upon a hillock as I lay: spread before me a vast expanse of beauty

Composed of mountains, purple in the distance, broad fields of grain and hay.

And living there, captive to the sweet, pure breezes,

I thought not of my duty.

But rather, dwelt in dreams of lands afar, of things which could not come my way.

When suddenly I was rudely shaken.

And, angry, I turned to find myself face to face with—who?

Mother—And is my boy really trying?

“Why, he can tell the owner of any lipstick in Senior High by simply tasting it.”

Doris—Yes, very! When I say to him.

“Come here or don't come here, just as you please,” why he comes or he doesn't come, just as he pleases.

A MATTER OF NUMBER

Scott—My, Nan has a singular voice.

John—Thank the Lord, it isn't plural.

Mr. Kennedy—The man who marries my daughter will want a lot of money.

Robert—Well, sir, no one wants it any worse than I do.

She—Could you learn to love me?

He—It's a cinch. Why, I learned shorthand in three weeks.

Bridegroom—I thee endow with all my worldly goods.

His Father—There goes his bicycle.

Sally—I have to talk so you can understand me.

These are some expressions that were in the “Hillcrest” They are from the Yearbook of 1932 from Roosevelt High.

I thought they were neat.