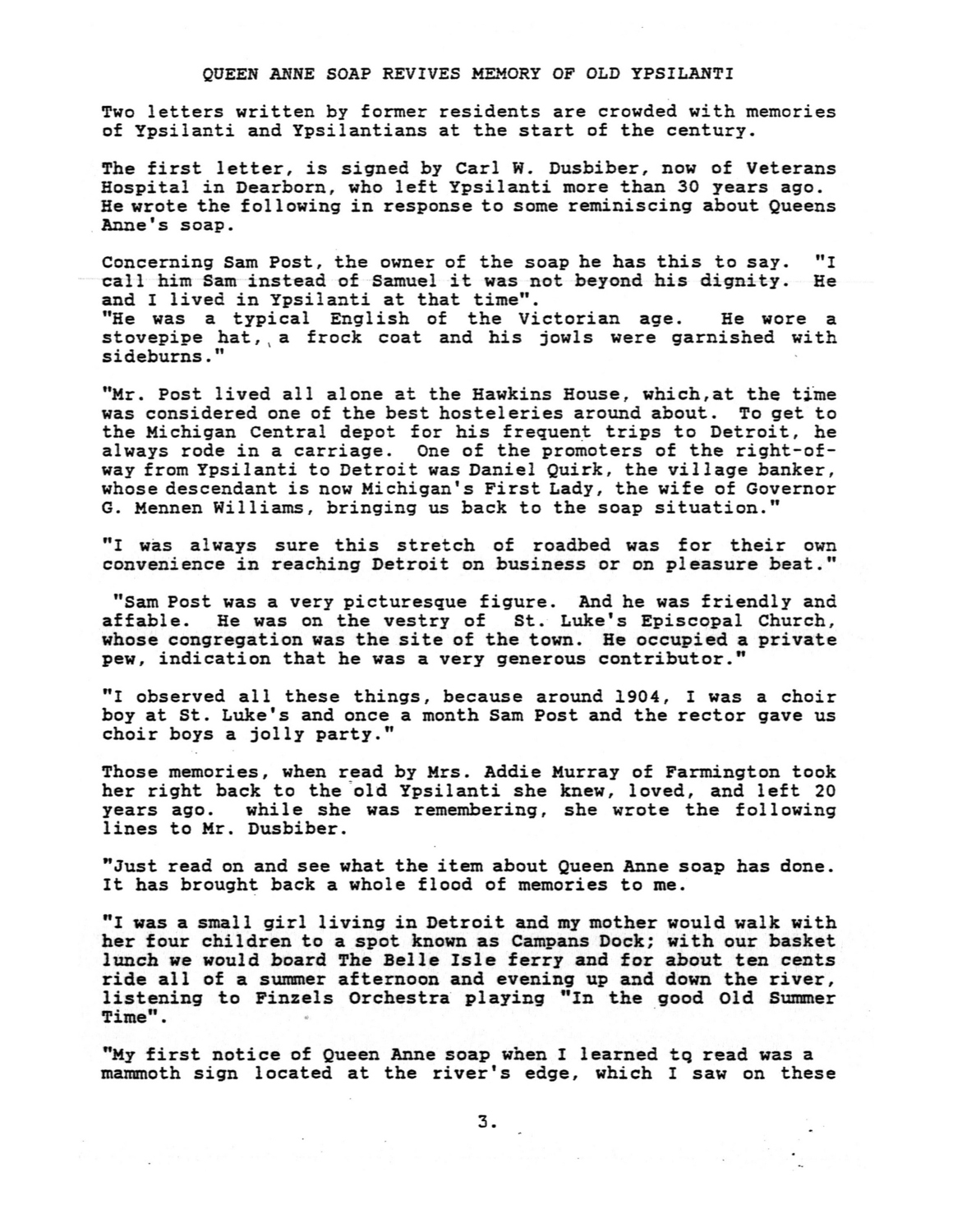 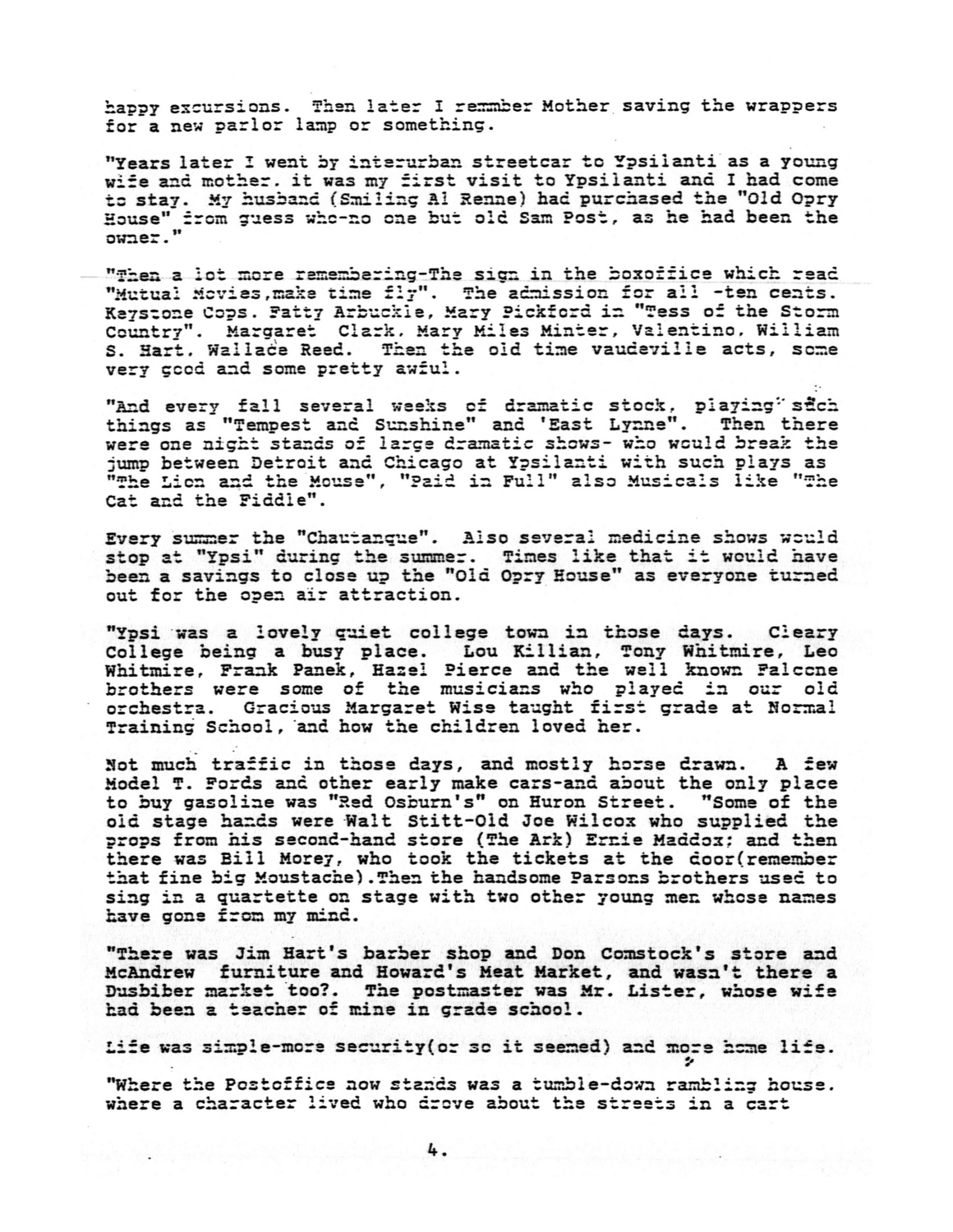 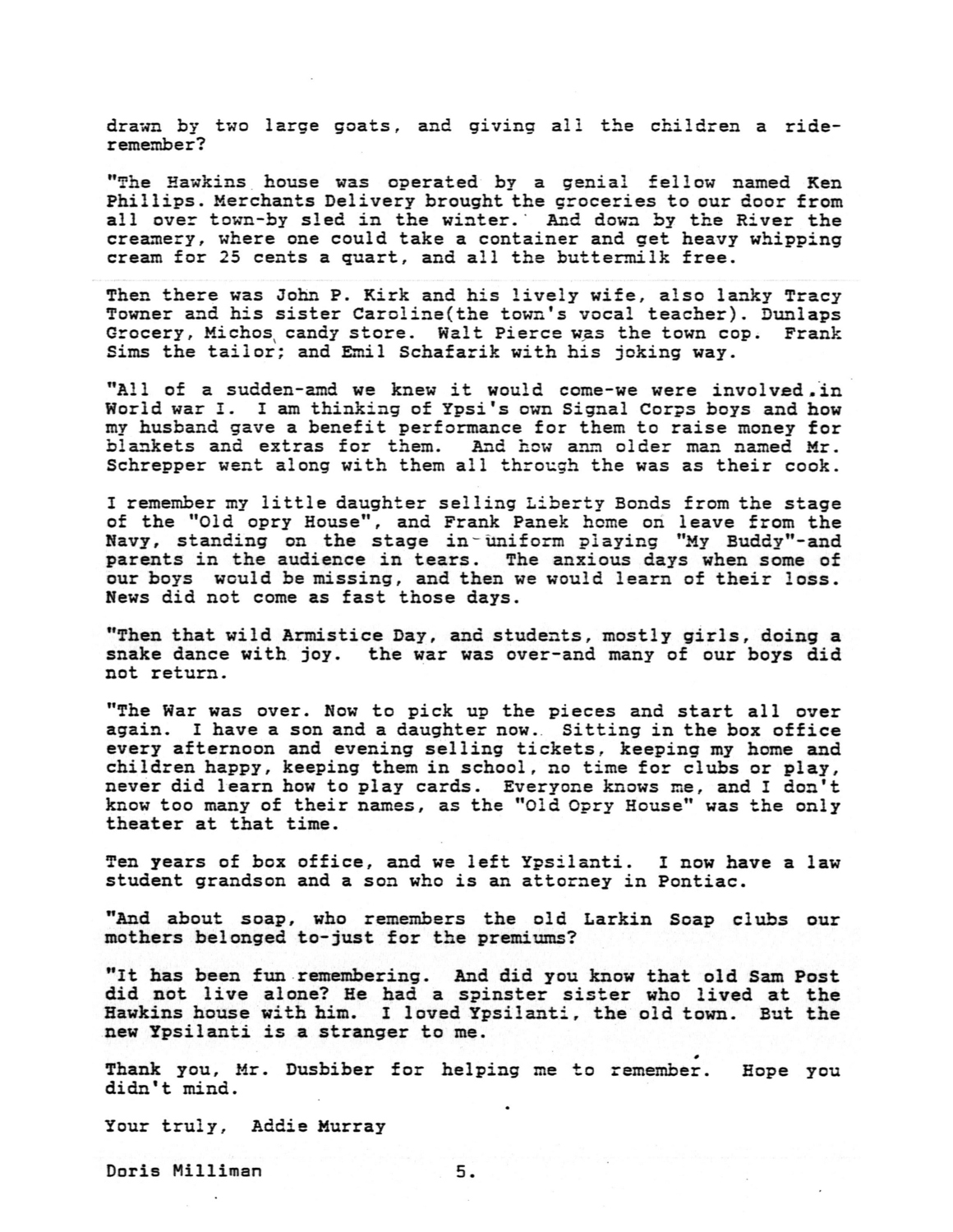 Two letters written by former residents are crowded with memories of Ypsilanti and Ypsilantians at the start of the century.

The first letter, is signed by Carl W. Dusbiber, now of Veterans Hospital in Dearborn, who left Ypsilanti more than 30 years ago. He wrote the following in response to some reminiscing about Queens Anne's soap.

Concerning Sam Post, the owner of the soap he has this to say. “I call him Sam instead of Samuel it was not beyond his dignity. He and I lived in Ypsilanti at that time”.

“He was a typical English of the Victorian age. He wore a stovepipe hat, a frock coat and his jowls were garnished with sideburns.”

“Mr. Post lived all alone at the Hawkins House, which, at the time was considered one of the best hosteleries around about. To get to the Michigan Central depot for his frequent trips to Detroit, he always rode in a carriage. One of the promoters of the right-of-way from Ypsilanti to Detroit was Daniel Quirk, the village banker, whose descendant is now Michigan's First Lady, the wife of Governor G. Mennen Williams, bringing us back to the soap situation.”

“I was always sure this stretch of roadbed was for their own convenience in reaching Detroit on business or on pleasure beat.”

“Sam Post was a very picturesque figure. And he was friendly and affable. He was on the vestry of St. Luke's Episcopal Church, whose congregation was the site of the town. He occupied a private pew, indication that he was a very generous contributor.”

“I observed all these things, because around 1904, I was a choir boy at St. Luke's and once a month Sam Post and the rector gave us choir boys a jolly party.”

Those memories, when read by Mrs. Addie Murray of Farmington took her right back to the old Ypsilanti she knew, loved, and left 20 years ago. while she was remembering, she wrote the following lines to Mr. Dusbiber.

“Just read on and see what the item about Queen Anne soap has done. It has brought back a whole flood of memories to me.

“I was a small girl living in Detroit and my mother would walk with her four children to a spot known as Campans Dock; with our basket lunch we would board The Belle Isle ferry and for about ten cents ride all of a summer afternoon and evening up and down the river, listening to Finzels Orchestra playing “In the good Old Summer Time”.

“My first notice of Queen Anne soap when I learned to read was a mammoth sign located at the river's edge, which I saw on these happy excursions. Then later I remmber Mother saving the wrappers for a new parlor lamp or something.

“Years later I went by interurban streetcar to Ypsilanti as a young wife and mother, it was my first visit to Ypsilanti and I had come to stay. My husband (Smiling Al Renne) had purchased the “Old Opry House” from guess who-no one but old Sam Post, as he had been the owner.”

“And every fall several weeks of dramatic stock, playing” such things as “Tempest and Sunshine” and ‘East Lynne’. Then there were one night stands of large dramatic shows-who would break the jump between Detroit and Chicago at Ypsilanti with such plays as “The Lion and the Mouse”, “Paid in Full” also Musicals like “The Cat and the Fiddle”.

Every summer the “Chautanque”. Also several medicine shows would stop at “Ypsi” during the summer. Times like that it would have been a savings to close up the “Old Opry House” as everyone turned out for the open air attraction.

“Ypsi was a lovely quiet college town in those days. Cleary College being a busy place. Lou Killian, Tony Whitmire, Leo Whitmire, Frank Panek, Hazel Pierce and the well known Falcone brothers were some of the musicians who played in our old orchestra. Gracious Margaret Wise taught first grade at Normal Training School, and how the children loved her.

Not much traffic in those days, and mostly horse drawn. A few Model T. Fords and other early make cars-and about the only place to buy gasoline was “Red Osburn's” on Huron Street. “Some of the old stage hands were Walt Stitt-Old Joe Wilcox who supplied the props from his second-hand store (The Ark) Ernie Maddox: and then there was Bill Morey, who took the tickets at the door (remember that fine big Moustache). Then the handsome Parsons brothers used to sing in a quartette on stage with two other young men whose names have gone from my mind.

“There was Jim Hart's barber shop and Don Comstock's store and McAndrew furniture and Howard's Meat Market, and wasn't there a Dusbiber market too?. The postmaster was Mr. Lister, whose wife had been a teacher of mine in grade school.

Life was simple-more security (or so it seemed) and more home life.

“Where the Postoffice now stands was a tumble-down rambling house. where a character lived who drove about the streets in a cart drawn by two large goats, and giving all the children a ride-remember?

“The Hawkins house was operated by a genial fellow named Ken Phillips. Merchants Delivery brought the groceries to our door from all over town-by sled in the winter. And down by the River the creamery, where one could take a container and get heavy whipping cream for 25 cents a quart, and all the buttermilk free.

Then there was John P. Kirk and his lively wife, also lanky Tracy Towner and his sister Caroline (the town's vocal teacher). Dunlaps Grocery, Michos candy store. Walt Pierce was the town cop. Frank Sims the tailor; and Emil Schafarik with his joking way.

“All of a sudden-amd we knew it would come-we were involved. in World war I. I am thinking of Ypsi's own Signal Corps boys and how my husband gave a benefit performance for them to raise money for blankets and extras for them. And how anm older man named Mr. Schrepper went along with them all through the was as their cook.

I remember my little daughter selling Liberty Bonds from the stage of the “Old opry House”, and Frank Panek home on leave from the Navy, standing on the stage in uniform playing “My Buddy”-and parents in the audience in tears. The anxious days when some of our boys would be missing, and then we would learn of their loss. News did not come as fast those days.

“Then that wild Armistice Day, and students, mostly girls, doing a snake dance with joy. the war was over-and many of our boys did not return.

“The War was over. Now to pick up the pieces and start all over again. I have a son and a daughter now. Sitting in the box office every afternoon and evening selling tickets, keeping my home and children happy, keeping them in school, no time for clubs or play, never did learn how to play cards. Everyone knows me, and I don't know too many of their names, as the “Old Opry House” was the only theater at that time.

Ten years of box office, and we left Ypsilanti. I now have a law student grandson and a son who is an attorney in Pontiac.

“And about soap, who remembers the old Larkin Soap clubs our mothers belonged to-just for the premiums?

“It has been fun remembering. And did you know that old Sam Post did not live alone? He had a spinster sister who lived at the Hawkins house with him. I loved Ypsilanti, the old town. But the new Ypsilanti is a stranger to me.

Thank you, Mr. Dusbiber for helping me to remember. Hope you didn't mind.

This picture is in our files.