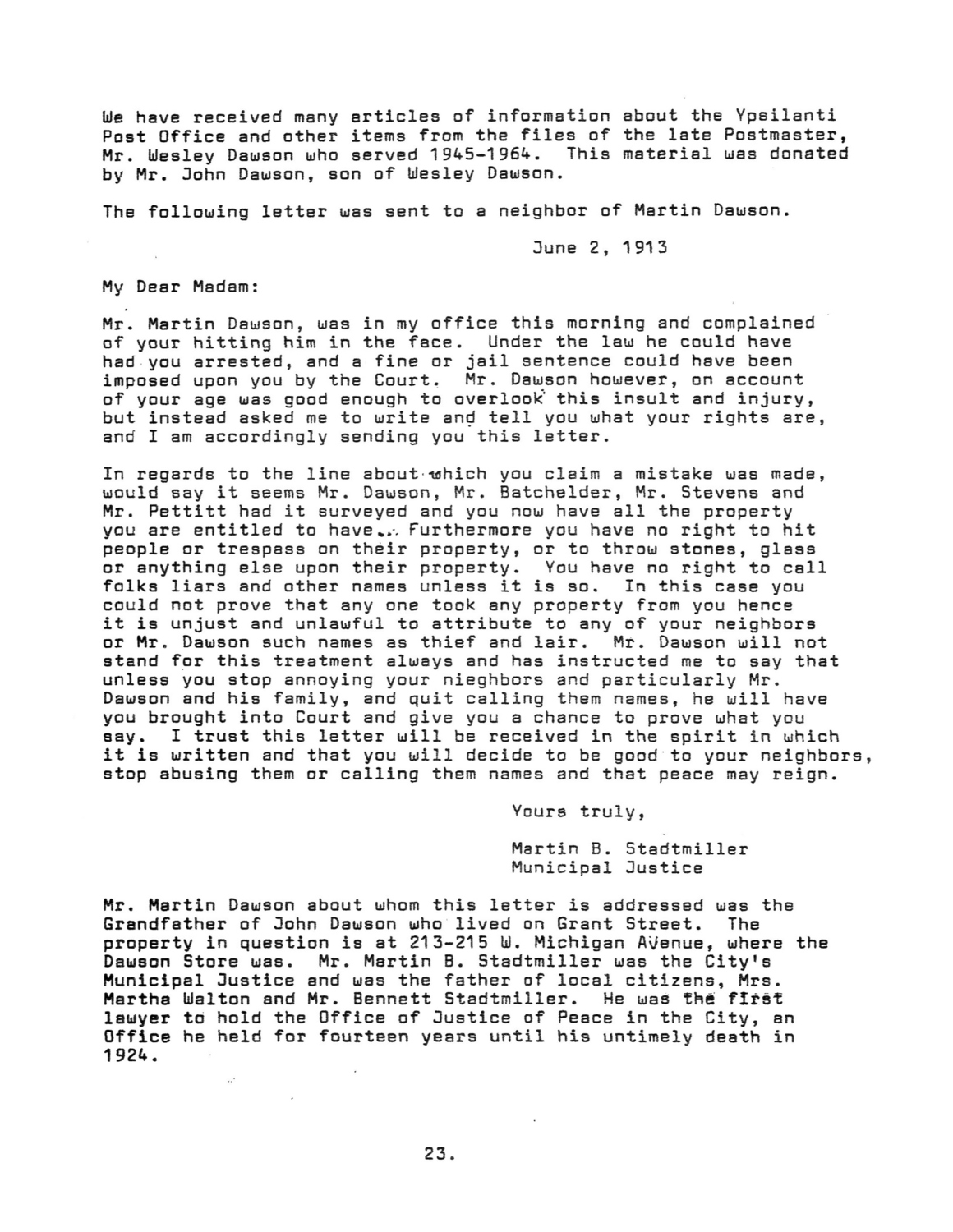 We have received many articles of information about the Ypsilanti Post Office and other items from the files of the late Postmaster, Mr. Wesley Dawson who served 1945-1964. This material was donated by Mr. John Dawson, son of Wesley Dawson.

The following letter was sent to a neighbor of Martin Dawson.

Mr. Martin Dawson, was in my office this morning and complained of your hitting him in the face. Under the law he could have had you arrested, and a fine or jail sentence could have been imposed upon you by the Court. Mr. Dawson however, on account of your age was good enough to overlook this insult and injury, but instead asked me to write and tell you what your rights are, and I am accordingly sending you this letter.

In regards to the line about which you claim a mistake was made, would say it seems Mr. Dawson, Mr. Batchelder, Mr. Stevens and Mr. Pettitt had it surveyed and you now have all the property you are entitled to have. Furthermore you have no right to hit people or trespass on their property, or to throw stones, glass or anything else upon their property. You have no right to call folks liars and other names unless it is so. In this case you could not prove that any one took any property from you hence it is unjust and unlawful to attribute to any of your neighbors or Mr. Dawson such names as thief and lair. Mr. Dawson will not stand for this treatment always and has instructed me to say that unless you stop annoying your neighbors and particularly Mr. Dawson and his family, and quit calling them names, he will have you brought into Court and give you a chance to prove what you say. I trust this letter will be received in the spirit in which it is written and that you will decide to be good to your neighbors, stop abusing them or calling them names and that peace may reign.

Mr. Martin Dawson about whom this letter is addressed was the Grandfather of John Dawson who lived on Grant Street. The property in question is at 213-215 W. Stadtmiller was the City's Municipal Justice and was the father of local citizens, Mrs. Martha Walton and Mr. Bennett Stadtmiller. He was the first lawyer to hold the Office of Justice of Peace in the City, an Office he held for fourteen years until his untimely death in 1924.