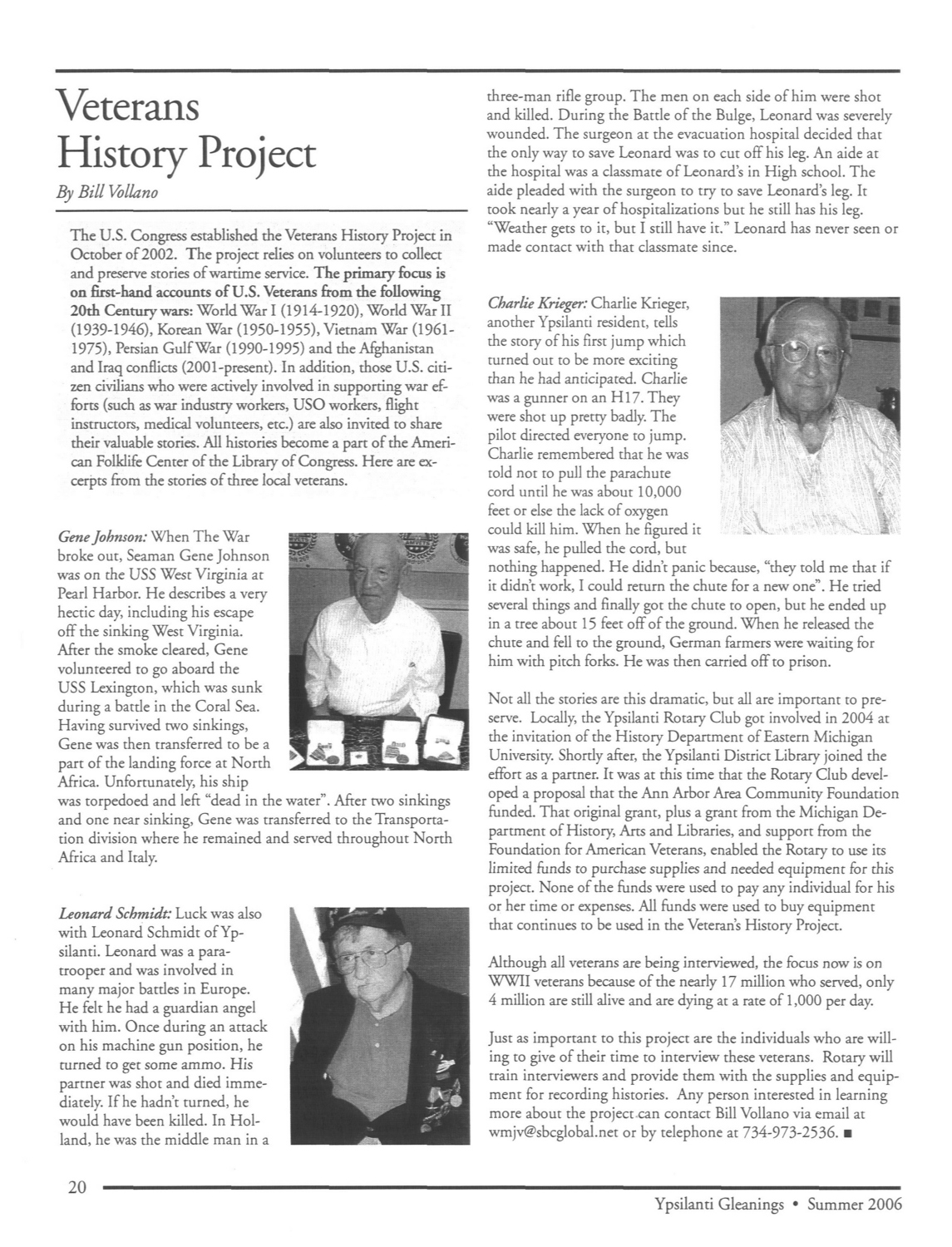 The U.S. Congress established the Veterans History Project in October of 2002. The project relies on volunteers to collect and preserve stories of wartime service. The primary focus is on first-hand accounts of U.S. Veterans from the following 20th Century wars: World War I (1914–1920), World War II (1939–1946), Korean War (1950–1955), Vietnam War (1961–1975), Persian Gulf War (1990–1995) and the Afghanistan and Iraq conflicts (2001-present). In addition, those U.S. citizen civilians who were actively involved in supporting war efforts (such as war industry workers, USO workers, flight instructors, medical volunteers, etc.) are also invited to share their valuable stories. All histories become a part of the American Folklife Center of the Library of Congress. Here are excerpts from the stories of three local veterans.

Gene Johnson: When The War broke out, Seaman Gene Johnson was on the USS West Virginia at Pearl Harbor. He describes a very hectic day, including his escape off the sinking West Virginia. After the smoke cleared, Gene volunteered to go aboard the USS Lexington, which was sunk during a battle in the Coral Sea. Having survived two sinkings, Gene was then transferred to be a part of the landing force at North Africa. Unfortunately, his ship was torpedoed and left “dead in the water”. After two sinkings and one near sinking, Gene was transferred to the Transportation division where he remained and served throughout North Africa and Italy.

Leonard Schmidt: Luck was also with Leonard Schmidt of Ypsilanti. Leonard was a para-trooper and was involved in many major battles in Europe. He felt he had a guardian angel with him. Once during an attack on his machine gun position, he turned to get some ammo. His partner was shot and died immediately. If he hadn't turned, he would have been killed. In Holland, he was the middle man in a three-man rifle group. The men on each side of him were shot and killed. During the Battle of the Bulge, Leonard was severely wounded. The surgeon at the evacuation hospital decided that the only way to save Leonard was to cut off his leg. An aide at the hospital was a classmate of Leonard's in High school. The aide pleaded with the surgeon to try to save Leonard's leg. It took nearly a year of hospitalizations but he still has his leg. “Weather gets to it, but I still have it.” Leonard has never seen or made contact with that classmate since.

Charlie Krieger: Charlie Krieger, another Ypsilanti resident, tells the story of his first jump which turned out to be more exciting than he had anticipated. Charlie was a gunner on an H17. They were shot up pretty badly. The pilot directed everyone to jump. Charlie remembered that he was told not to pull the parachute cord until he was about 10,000 feet or else the lack of oxygen could kill him. When he figured it was safe, he pulled the cord, but nothing happened. He didn't panic because, “they told me that if it didn't work, I could return the chute for a new one”. He tried several things and finally got the chute to open, but he ended up in a tree about 15 feet off of the ground. When he released the chute and fell to the ground, German farmers were waiting for him with pitch forks. He was then carried off to prison.

Not all the stories are this dramatic, but all are important to preserve. Locally, the Ypsilanti Rotary Club got involved in 2004 at the invitation of the History Department of Eastern Michigan University. Shortly after, the Ypsilanti District Library joined the effort as a partner. It was at this time that the Rotary Club developed a proposal that the Ann Arbor Area Community Foundation funded. That original grant, plus a grant from the Michigan Department of History, Arts and Libraries, and support from the Foundation for American Veterans, enabled the Rotary to use its limited funds to purchase supplies and needed equipment for this project. None of the funds were used to pay any individual for his or her time or expenses. All funds were used to buy equipment that continues to be used in the Veteran's History Project.

Although all veterans are being interviewed, the focus now is on WWII veterans because of the nearly 17 million who served, only 4 million are still alive and are dying at a rate of 1,000 per day.

Just as important to this project are the individuals who are willing to give of their time to interview these veterans. Rotary will train interviewers and provide them with the supplies and equipment for recording histories. Any person interested in learning more about the project can contact Bill Vollano via email at wmjv@sbcglobal.net or by telephone at 734–973–2536.