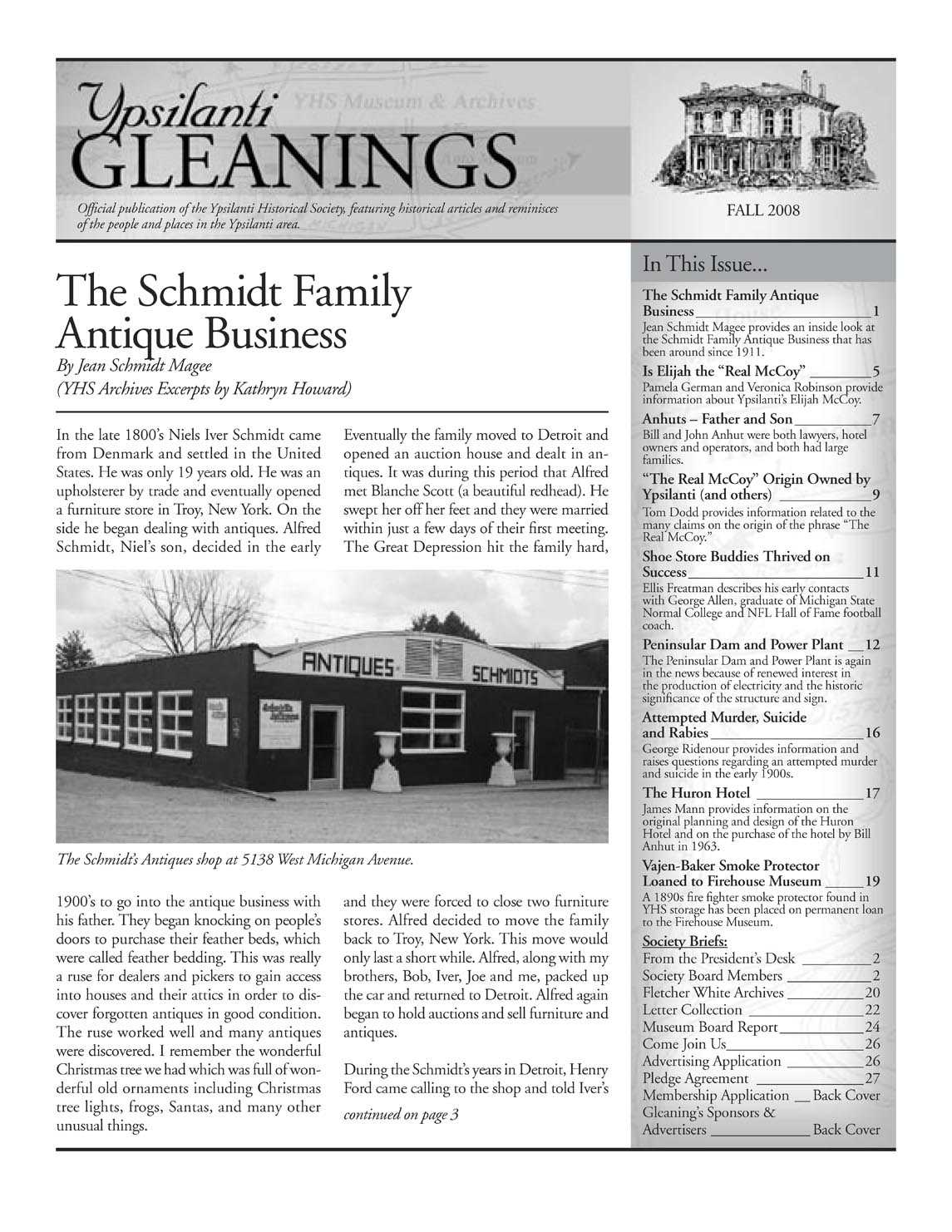 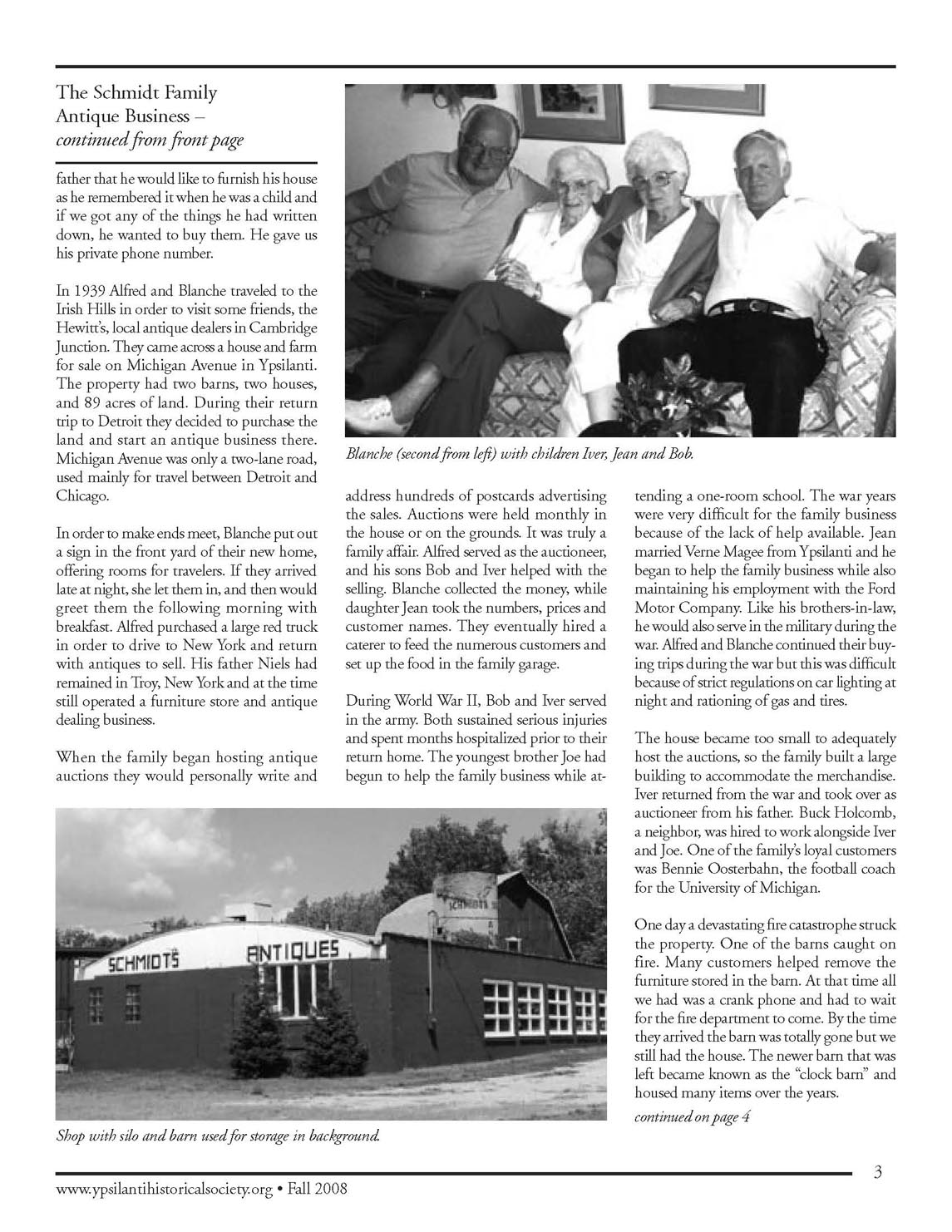 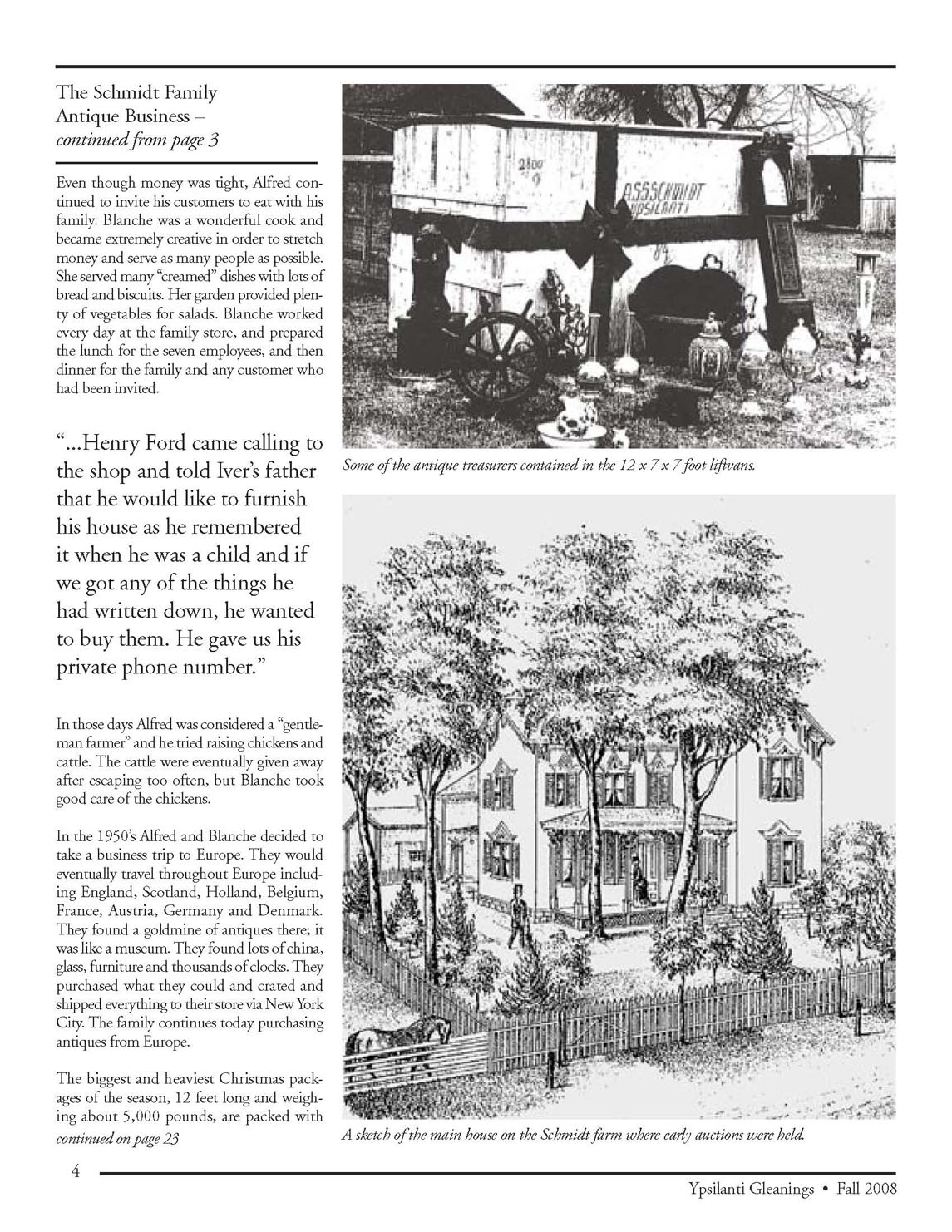 In the late 1800's Niels Iver Schmidt came from Denmark and settled in the United States. He was only 19 years old. He was an upholsterer by trade and eventually opened a furniture store in Troy, New York. On the side he began dealing with antiques. Alfred Schmidt, Niel’s son, decided in the early 1900's to go into the antique business with his father. They began knocking on people's doors to purchase their feather beds, which were called feather bedding. This was really a ruse for dealers and pickers to gain access into houses and their attics in order to discover forgotten antiques in good condition. The ruse worked well and many antiques were discovered. I remember the wonderful Christmas tree we had which was full of wonderful old ornaments including Christmas tree lights, frogs, Santas, and many other unusual things.

Eventually the family moved to Detroit and opened an auction house and dealt in antiques. It was during this period that Alfred met Blanche Scott (a beautiful redhead). He swept her off her feet and they were married within just a few days of their first meeting. The Great Depression hit the family hard, and they were forced to close two furniture stores. Alfred decided to move the family back to Troy, New York. This move would only last a short while. Alfred, along with my brothers, Bob, Iver, Joe and me packed up the car and returned to Detroit. Alfred again began to hold auctions and sell furniture and antiques.

During the Schmidt's years in Detroit, Henry Ford came calling to the shop and told Iver's father that he would like to furnish his house as he remembered it when he was a child and if we got any of the things he had written down, he wanted to buy them. He gave us his private phone number.

In 1939 Alfred and Blanche traveled to the Irish Hills in order to visit some friends, the Hewitt's, local antique dealers in Cambridge Junction. They came across a house and farm for sale on Michigan Avenue in Ypsilanti. The property had two barns, two houses, and 89 acres of land. During their return trip to Detroit they decided to purchase the land and start an antique business there. Michigan Avenue was only a two-lane road, used mainly for travel between Detroit and Chicago.

In order to make ends meet, Blanche put out a sign in the front yard of their new home, offering rooms for travelers. If they arrived late at night, she let them in, and then would greet them the following morning with breakfast. Alfred purchased a large red truck in order to drive to New York and return with antiques to sell. His father Niels had remained in Troy, New York and at the time still operated a furniture store and antique dealing business.

When the family began hosting antique auctions they would personally write and address hundreds of postcards advertising the sales. Auctions were held monthly in the house or on the grounds. It was truly a family affair. Alfred served as the auctioneer, and his sons Bob and Iver helped with the selling. Blanche collected the money, while daughter Jean took the numbers, prices and customer names. They eventually hired a caterer to feed the numerous customers and set up the food in the family garage.

During World War II, Bob and Iver served in the army. Both sustained serious injuries and spent months hospitalized prior to their return home. The youngest brother Joe had begun to help the family business while attending a one-room school. The war years were very difficult for the family business because of the lack of help available. Jean married Verne Magee from Ypsilanti and he began to help the family business while also maintaining his employment with the Ford Motor Company. Like his brothers-in-law, he would also serve in the military during the war. Alfred and Blanche continued their buying trips during the war but this was difficult because of strict regulations on car lighting at night and rationing of gas and tires.

The house became too small to adequately host the auctions, so the family built a large building to accommodate the merchandise. Iver returned from the war and took over as auctioneer from his father. Buck Holcomb, a neighbor, was hired to work alongside Iver and Joe. One of the family's loyal customers was Bennie Oosterbahn, the football coach for the University of Michigan.

One day a devastating fire catastrophe struck the property. One of the barns caught on fire. Many customers helped remove the furniture stored in the barn. At that time all we had was a crank phone and had to wait for the fire department to come. By the time they arrived the barn was totally gone but we still had the house. The newer barn that was left became known as the "clock barn" and housed many items over the years.

Even though money was tight, Alfred continued to invite his customers to eat with his family. Blanche was a wonderful cook and became extremely creative in order to stretch money and serve as many people as possible. She served many "creamed" dishes with lots of bread and biscuits. Her garden provided plenty of vegetables for salads. Blanche worked every day at the family store, and prepared the lunch for the seven employees, and then dinner for the family and any customer who had been invited.

In those days Alfred was considered a "gentleman farmer" and he tried raising chickens and cattle. The cattle were eventually given away after escaping too often, but Blanche took good care of the chickens.

In the 1950's Alfred and Blanche decided to take a business trip to Europe. They would eventually travel throughout Europe including England, Scotland, Holland, Belgium, France, Austria, Germany and Denmark. They found a goldmine of antiques there; it was like a museum. They found lots of china, glass, furniture and thousands of clocks. They purchased what they could and crated and shipped everything to their store via New York City. The family continues today purchasing antiques from Europe.

The biggest and heaviest Christmas packages of the season, 12 feet long and weighing about 5,000 pounds, are packed with goodies for Michigan Antique Collectors. Ten of the boxes, called liftvans, arrive in Detroit via the St. Lawrence Seaway on the last boats before lake shipping closes for the winter. Hoisted on flatbed trucks, they are transferred to Ypsilanti for exhibition and auction at Schmidt's Antiques.

Unpacking the liftvans is a five-day job for 10 men. It is also like one big Christmas celebration. Each box is filled with surprises. A gondola seat from Venice, upholstered in faded red velvet. A pair of bulbous brass urns from Denmark, called castle sticks, evidently intended to hold thick candles. Carved wooden angels from a dismantled church rub wings with a wing chair. There are chandeliers, mirrors, tall case clocks, pilot wheels, marble pedestals and paintings packed tightly together, with china, bronzes, brass and copper items tucked into the crevices. No space is wasted in the l2x7x7 foot liftvans. For packing material there is excelsior and old newspapers printed in assorted languages. Breakage is rare, according to the Schmidts, despite the long journey from Rotterdam, London and Glasgow. “The contents of the liftvans on view in the big red barns at 5138 W. Michigan Avenue, Ypsilanti, would provide months of winter fun for collectors.” [Detroit Free Press Sunday Magazine: December 22.1963.]

One of the largest auctions ever handled by the Schmidt family was in the 1960's. It was the estate of Gladys and Charlie Newton. Charlie Newton assisted Henry Ford assembling buildings and furnishings for the Henry Ford Museum and Village. They owned a fabulous home at 220 South Huron Street, Ypsilanti, which was full of beautiful early antiques, including the structure of an inn that had been rebuilt in their basement. Gladys had become close to the family and was a loyal customer. The large secretary located in the Milliman Room of the Ypsilanti Historical Museum was purchased from the Newton estate by Mr. and Mrs. Charles Morrison and given to the Museum.

Over the years the Schmidt family acquired several fine estate auctions including a house in Macon that had been owned by Henry Ford.

Lillian Jackson Braun, popular mystery writer of the "Cat Who Series," became a close friend of Jean's and often patronized the family business in Northville and Ypsilanti.

Schmidt's Antiques is still family-owned. Chuck and Jay Schmidt, grandsons of Alfred and Blanche, are now the operators of the family business, and both reside on the family land. Schmidt's Antiques has been serving the community and its many patrons from across the country for seventy years, and will continue to do so in the future.

(Jean Schmidt Magee provides an inside view of the Schmidt family antique business. Kathryn Howard is a member of the Board of the Ypsilanti Historical Society.)

Photo 3: Shop with silo and barn used for storage in background.

Photo 4: Some of the antique treasurers contained in the 12 x 7 x 7 foot liftvans.

Photo 5: A sketch of the main house on the Schmidt farm where early auctions were held.