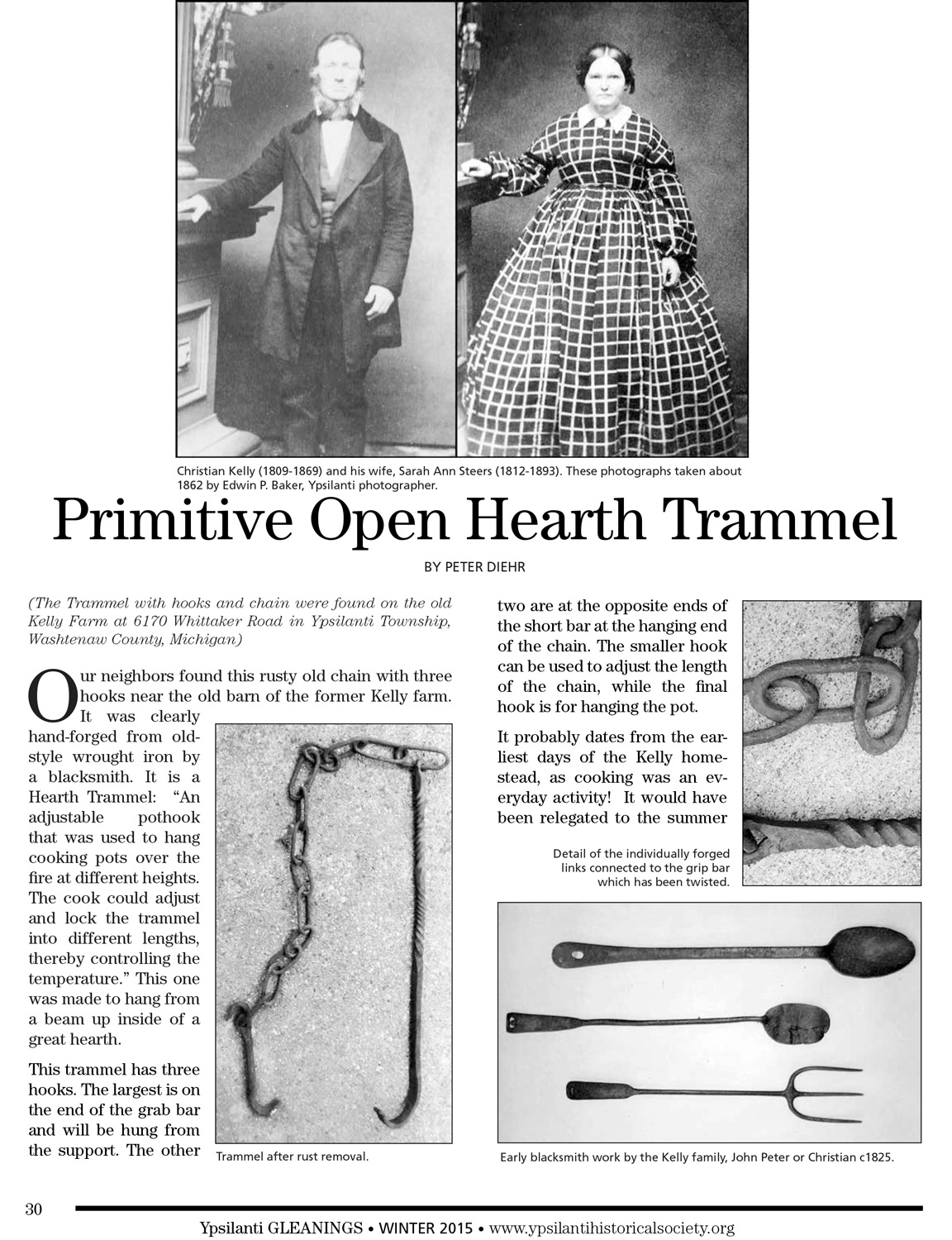 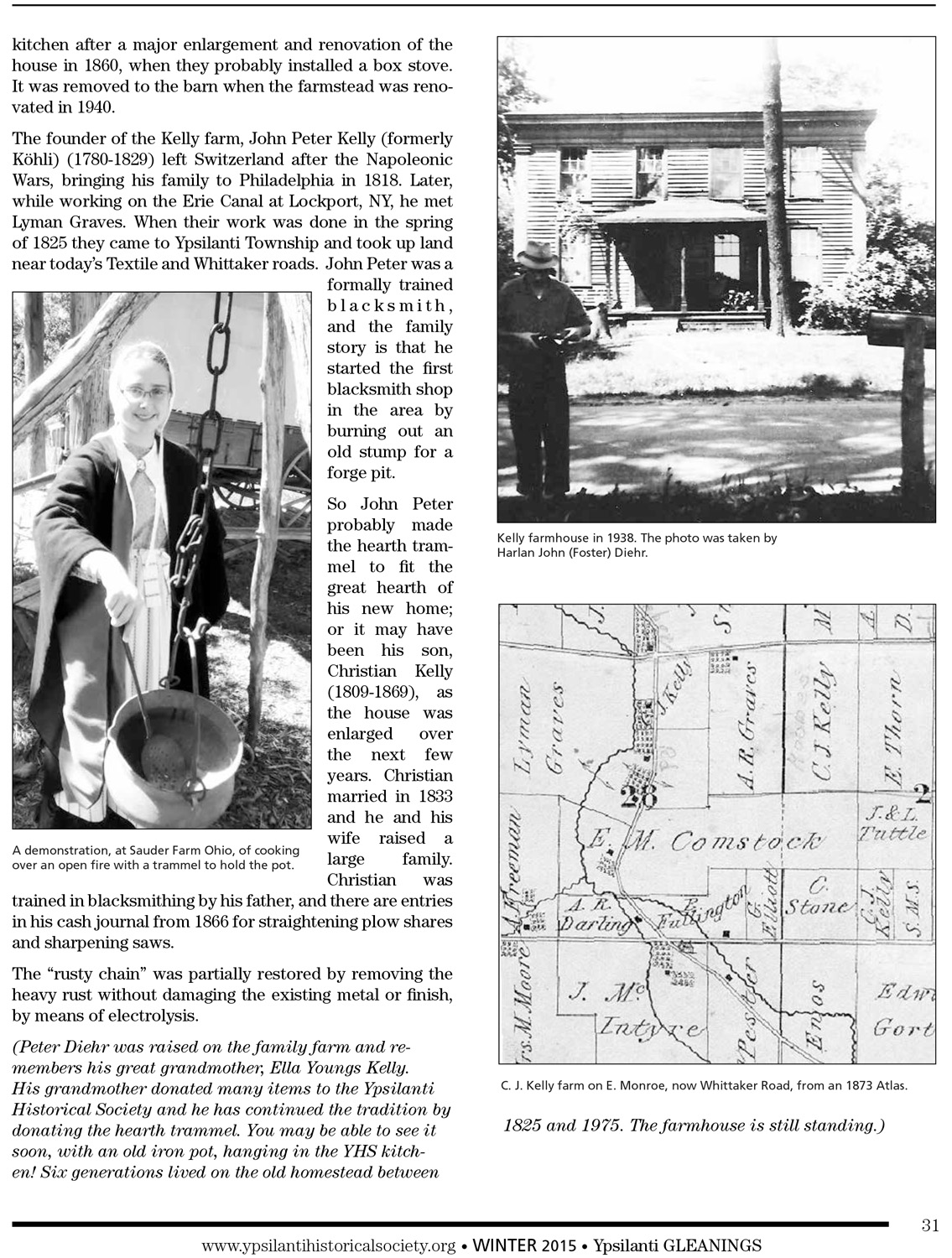 (The Trammel with hooks and chain were found on the old Kelly Farm at 6170 Whittaker Road in Ypsilanti Township, Washtenaw County, Michigan) Our neighbors found this rusty old chain with three hooks near the old barn of the former Kelly farm. It was clearly hand-forged from old-style wrought iron by a blacksmith. It is a Hearth Trammel:  “An adjustable pothook that was used to hang cooking pots over the fire at different heights. The cook could adjust and lock the trammel into different lengths, thereby controlling the temperature.” This one was made to hang from a beam up inside of a great hearth. This trammel has three hooks. The largest is on the end of the grab bar and will be hung from the support. The other two are at the opposite ends of the short bar at the hanging end of the chain. The smaller hook can be used to adjust the length of the chain, while the final hook is for hanging the pot. It probably dates from the earliest days of the Kelly homestead, as cooking was an everyday activity! It would have been relegated to the summer kitchen after a major enlargement and renovation of the house in 1860, when they probably installed a box stove. It was removed to the barn when the farmstead was renovated in 1940. The founder of the Kelly farm, John Peter Kelly (formerly Köhli) (1780-1829) left Switzerland after the Napoleonic Wars, bringing his family to Philadelphia in 1818. Later, while working on the Erie Canal at Lockport, NY, he met Lyman Graves. When their work was done in the spring of 1825 they came to Ypsilanti Township and took up land near today’s Textile and Whittaker roads. John Peter was a formally trained blacksmith, and the family story is that he started the first blacksmith shop in the area by burning out an old stump for a forge pit. So John Peter probably made the hearth trammel to fit the great hearth of his new home; or it may have been his son, Christian Kelly (1809-1869), as the house was enlarged over the next few years. Christian married in 1833 and he and his wife raised a large family. Christian was trained in blacksmithing by his father, and there are entries in his cash journal from 1866 for straightening plow shares and sharpening saws. The “rusty chain” was partially restored by removing the heavy rust without damaging the existing metal or finish, by means of electrolysis. (Peter Diehr was raised on the family farm and remembers his great grandmother, Ella Youngs Kelly. His grandmother donated many items to the Ypsilanti Historical Society and he has continued the tradition by donating the hearth trammel. You may be able to see it soon, with an old iron pot, hanging in the YHS kitchen! Six generations lived on the old homestead between 1825 and 1975. The farmhouse is still standing.)

Photo 3: A demonstration, at Sauder Farm Ohio, of cooking over an open fire with a trammel to hold the pot.

Photo 4: Detail of the individually forged links connected to the grip bar which has been twisted.

Photo 7: Kelly farmhouse in 1938. The photo was taken by Harlan John (Foster) Diehr.