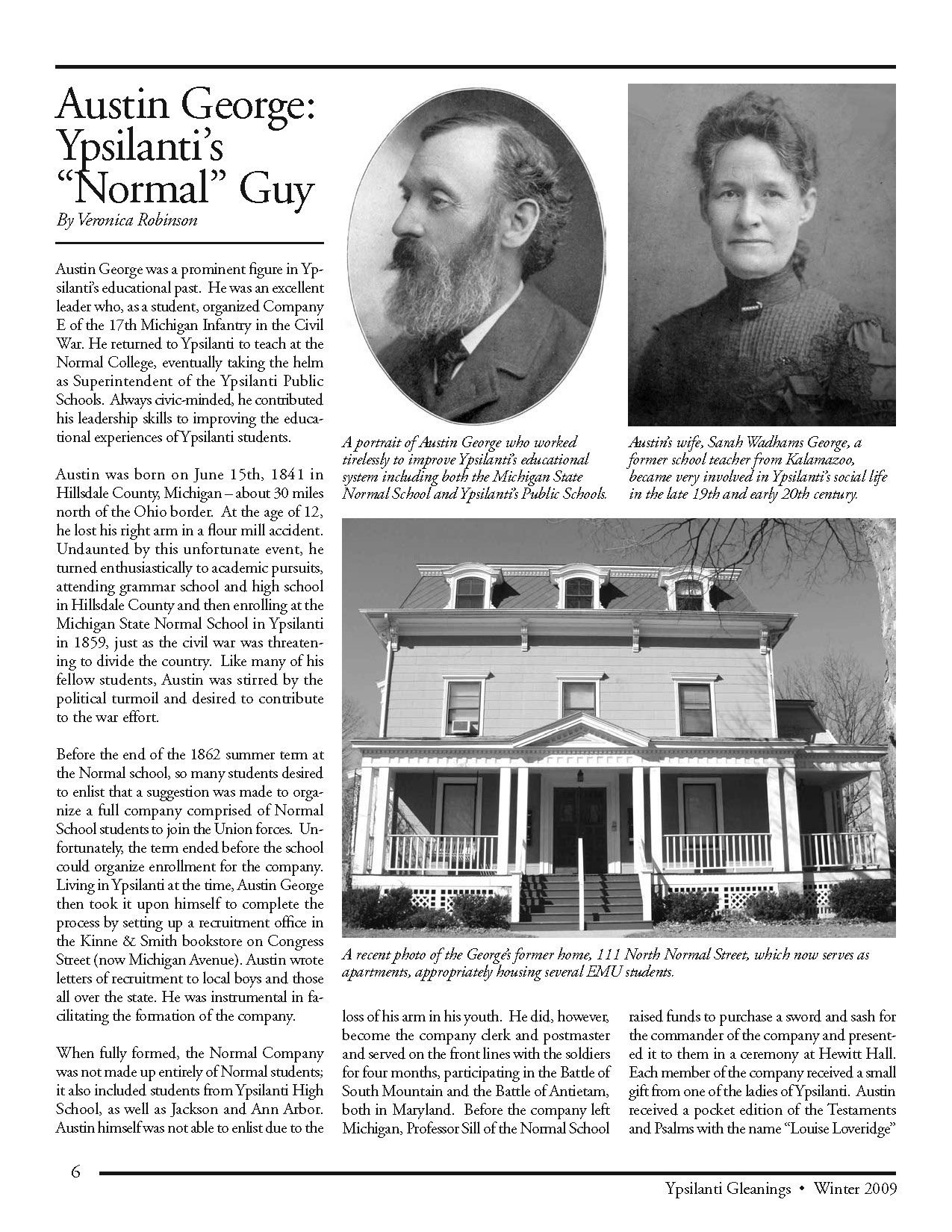 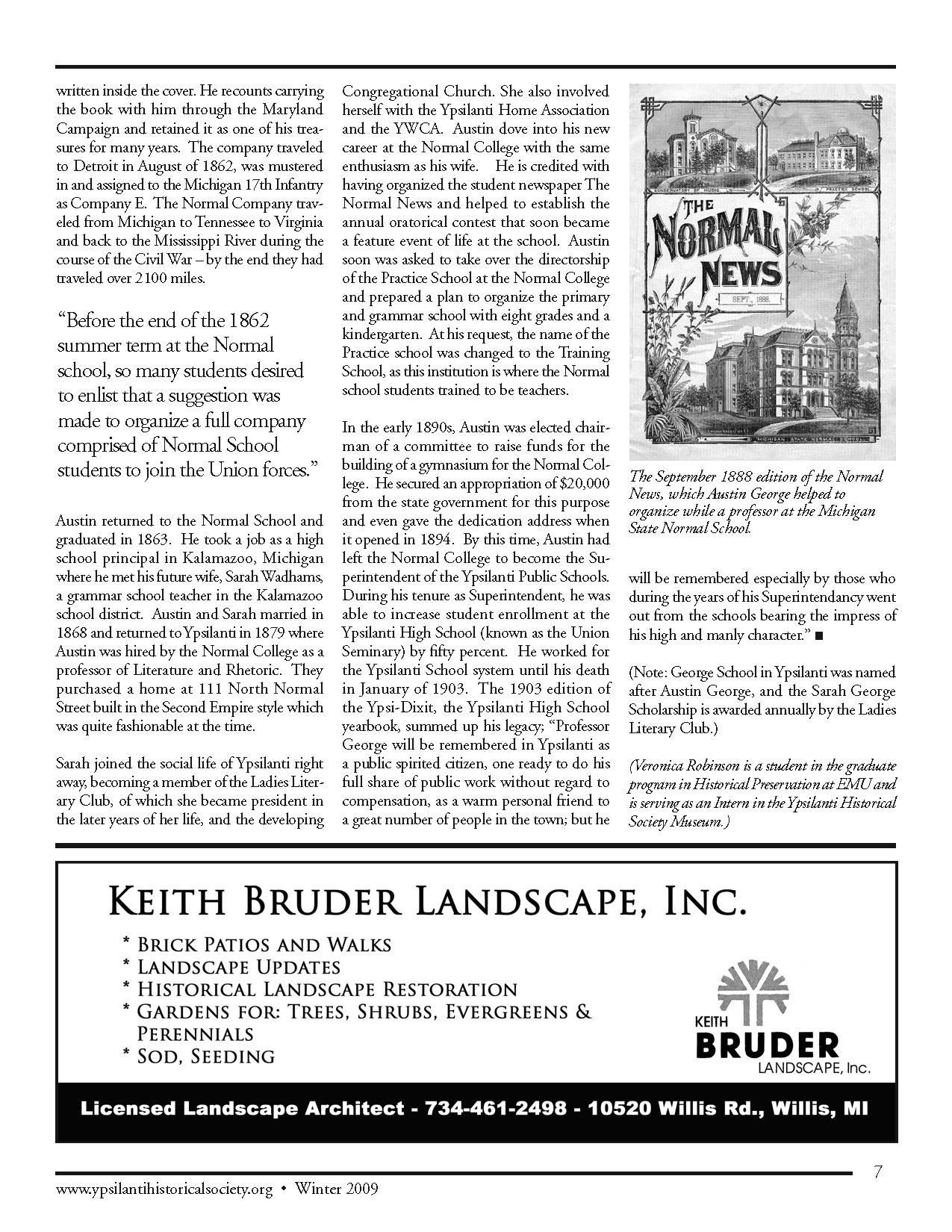 Austin George was a prominent figure in Ypsilanti’s educational past. He was an excellent leader who, as a student, organized Company E of the 17th Michigan Infantry in the Civil War. He returned to Ypsilanti to teach at the Normal College, eventually taking the helm as Superintendent of the Ypsilanti Public Schools. Always civic-minded, he contributed his leadership skills to improving the educational experiences of Ypsilanti students. Austin was born on June 15th, 1841 in Hillsdale County, Michigan – about 30 miles north of the Ohio border. At the age of 12, he lost his right arm in a flour mill accident. Undaunted by this unfortunate event, he turned enthusiastically to academic pursuits, attending grammar school and high school in Hillsdale County and then enrolling at the Michigan State Normal School in Ypsilanti in 1859, just as the civil war was threatening to divide the country. Like many of his fellow students, Austin was stirred by the political turmoil and desired to contribute to the war effort. Before the end of the 1862 summer term at the Normal school, so many students desired to enlist that a suggestion was made to organize a full company comprised of Normal School students to join the Union forces. Unfortunately, the term ended before the school could organize enrollment for the company. Living in Ypsilanti at the time, Austin George then took it upon himself to complete the process by setting up a recruitment office in the Kinne & Smith bookstore on Congress Street (now Michigan Avenue). Austin wrote letters of recruitment to local boys and those all over the state. He was instrumental in facilitating the formation of the company. When fully formed, the Normal Company was not made up entirely of Normal students; it also included students from Ypsilanti High School, as well as Jackson and Ann Arbor. Austin himself was not able to enlist due to the loss of his arm in his youth. He did, however, become the company clerk and postmaster and served on the front lines with the soldiers for four months, participating in the Battle of South Mountain and the Battle of Antietam, both in Maryland. Before the company left Michigan, Professor Sill of the Normal School raised funds to purchase a sword and sash for the commander of the company and presented it to them in a ceremony at Hewitt Hall. Each member of the company received a small gift from one of the ladies of Ypsilanti. Austin received a pocket edition of the Testaments and Psalms with the name “Louise Loveridge” written inside the cover. He recounts carrying the book with him through the Maryland Campaign and retained it as one of his treasures for many years. The company traveled to Detroit in August of 1862, was mustered in and assigned to the Michigan 17th Infantry as Company E. The Normal Company traveled from Michigan to Tennessee to Virginia and back to the Mississippi River during the course of the Civil War – by the end they had traveled over 2100 miles. Austin returned to the Normal School and graduated in 1863. He took a job as a high school principal in Kalamazoo, Michigan where he met his future wife, Sarah Wadhams, a grammar school teacher in the Kalamazoo school district. Austin and Sarah married in 1868 and returned to Ypsilanti in 1879 where Austin was hired by the Normal College as a professor of Literature and Rhetoric. They purchased a home at 111 North Normal Street built in the Second Empire style which was quite fashionable at the time. Sarah joined the social life of Ypsilanti right away, becoming a member of the Ladies Literary Club, of which she became president in the later years of her life, and the developing Congregational Church. She also involved herself with the Ypsilanti Home Association and the YWCA. Austin dove into his new career at the Normal College with the same enthusiasm as his wife. He is credited with having organized the student newspaper The Normal News and helped to establish the annual oratorical contest that soon became a feature event of life at the school. Austin soon was asked to take over the directorship of the Practice School at the Normal College and prepared a plan to organize the primary and grammar school with eight grades and a kindergarten. At his request, the name of the Practice school was changed to the Training School, as this institution is where the Normal school students trained to be teachers. In the early 1890s, Austin was elected chairman of a committee to raise funds for the building of a gymnasium for the Normal College. He secured an appropriation of $20,000 from the state government for this purpose and even gave the dedication address when it opened in 1894. By this time, Austin had left the Normal College to become the Superintendent of the Ypsilanti Public Schools. During his tenure as Superintendent, he was able to increase student enrollment at the Ypsilanti High School (known as the Union Seminary) by fifty percent. He worked for the Ypsilanti School system until his death in January of 1903. The 1903 edition of the Ypsi-Dixit, the Ypsilanti High School yearbook, summed up his legacy; “Professor George will be remembered in Ypsilanti as a public spirited citizen, one ready to do his full share of public work without regard to compensation, as a warm personal friend to a great number of people in the town; but he will be remembered especially by those who during the years of his Superintendancy went out from the schools bearing the impress of his high and manly character.” (Note: George School in Ypsilanti was named after Austin George, and the Sarah George Scholarship is awarded annually by the Ladies Literary Club.) (Veronica Robinson is a student in the graduate program in Historical Preservation at EMU and is serving as an Intern in the Ypsilanti Historical Society Museum.)
Photo 1: A portrait of Austin George who worked tirelessly to improve Ypsilanti’s educational system including both the Michigan State Normal School and Ypsilanti’s Public Schools.

Photo 4: The September 1888 edition of the Normal News, which Austin George helped to organize while a professor at the Michigan State Normal School.