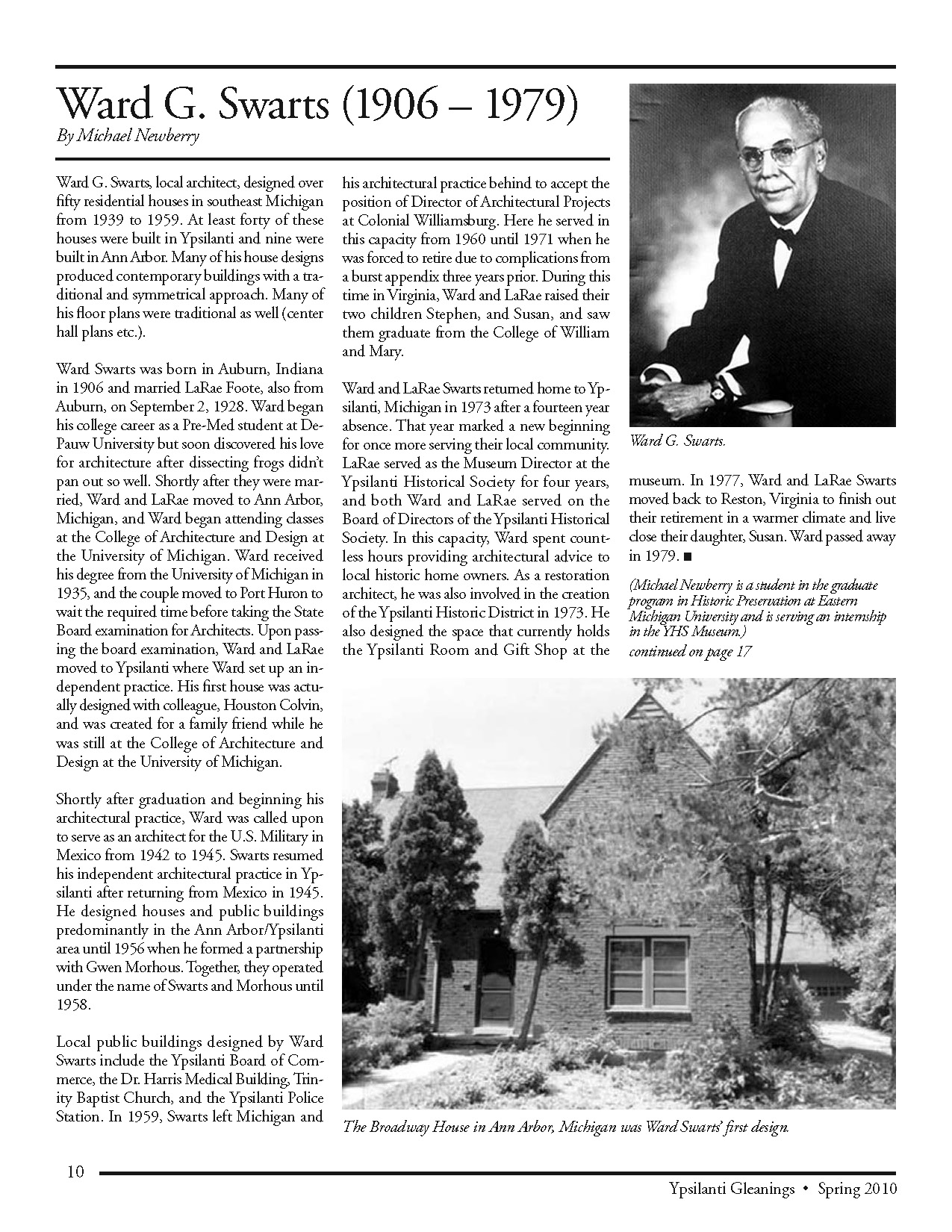 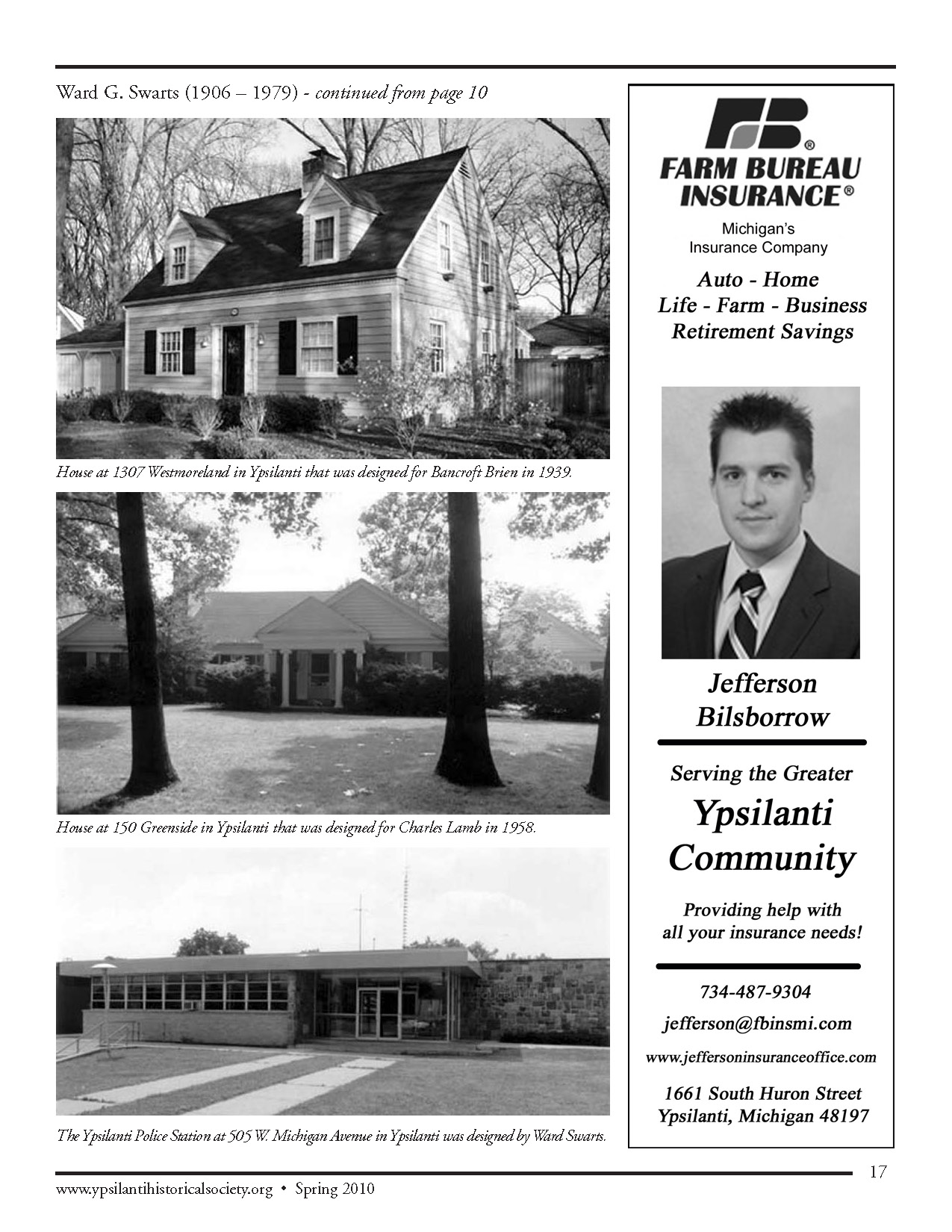 Ward G. Swarts, local architect, designed over fifty residential houses in southeast Michigan from 1939 to 1959. At least forty of these houses were built in Ypsilanti and nine were built in Ann Arbor. Many of his house designs produced contemporary buildings with a traditional and symmetrical approach. Many of his floor plans were traditional as well (center hall plans etc.). Ward Swarts was born in Auburn, Indiana in 1906 and married LaRae Foote, also from Auburn, on September 2, 1928. Ward began his college career as a Pre-Med student at DePauw University but soon discovered his love for architecture after dissecting frogs didn’t pan out so well. Shortly after they were married, Ward and LaRae moved to Ann Arbor, Michigan, and Ward began attending classes at the College of Architecture and Design at the University of Michigan. Ward received his degree from the University of Michigan in 1935, and the couple moved to Port Huron to wait the required time before taking the State Board examination for Architects. Upon passing the board examination, Ward and LaRae moved to Ypsilanti where Ward set up an independent practice. His first house was actually designed with colleague, Houston Colvin, and was created for a family friend while he was still at the College of Architecture and Design at the University of Michigan. Shortly after graduation and beginning his architectural practice, Ward was called upon to serve as an architect for the U.S. Military in Mexico from 1942 to 1945. Swarts resumed his independent architectural practice in Ypsilanti after returning from Mexico in 1945. He designed houses and public buildings predominantly in the Ann Arbor/Ypsilanti area until 1956 when he formed a partnership with Gwen Morhous. Together, they operated under the name of Swarts and Morhous until 1958. Local public buildings designed by Ward Swarts include the Ypsilanti Board of Commerce, the Dr. Harris Medical Building, Trinity Baptist Church, and the Ypsilanti Police Station. In 1959, Swarts left Michigan and his architectural practice behind to accept the position of Director of Architectural Projects at Colonial Williamsburg. Here he served in this capacity from 1960 until 1971 when he was forced to retire due to complications from a burst appendix three years prior. During this time in Virginia, Ward and LaRae raised their two children Stephen, and Susan, and saw them graduate from the College of William and Mary. Ward and LaRae Swarts returned home to Ypsilanti, Michigan in 1973 after a fourteen year absence. That year marked a new beginning for once more serving their local community. LaRae served as the Museum Director at the Ypsilanti Historical Society for four years, and both Ward and LaRae served on the Board of Directors of the Ypsilanti Historical Society. In this capacity, Ward spent countless hours providing architectural advice to local historic home owners. As a restoration architect, he was also involved in the creation of the Ypsilanti Historic District in 1973. He also designed the space that currently holds the Ypsilanti Room and Gift Shop at the museum. In 1977, Ward and LaRae Swarts moved back to Reston, Virginia to finish out their retirement in a warmer climate and live close their daughter, Susan. Ward passed away in 1979. (Michael Newberry is a student in the graduate program in Historic Preservation at Eastern Michigan University and is serving an internship in the YHS Museum.)
Photo Captions: Photo 1: Ward G. Swarts.

Photo 3: House at 1307 Westmoreland in Ypsilanti that was designed for Bancroft Brien in 1939.

Photo 4: House at 150 Greenside in Ypsilanti that was designed for Charles Lamb in 1958.

Photo 5: The Ypsilanti Police Station at 505 W. Michigan Avenue in Ypsilanti was designed by Ward Swarts.