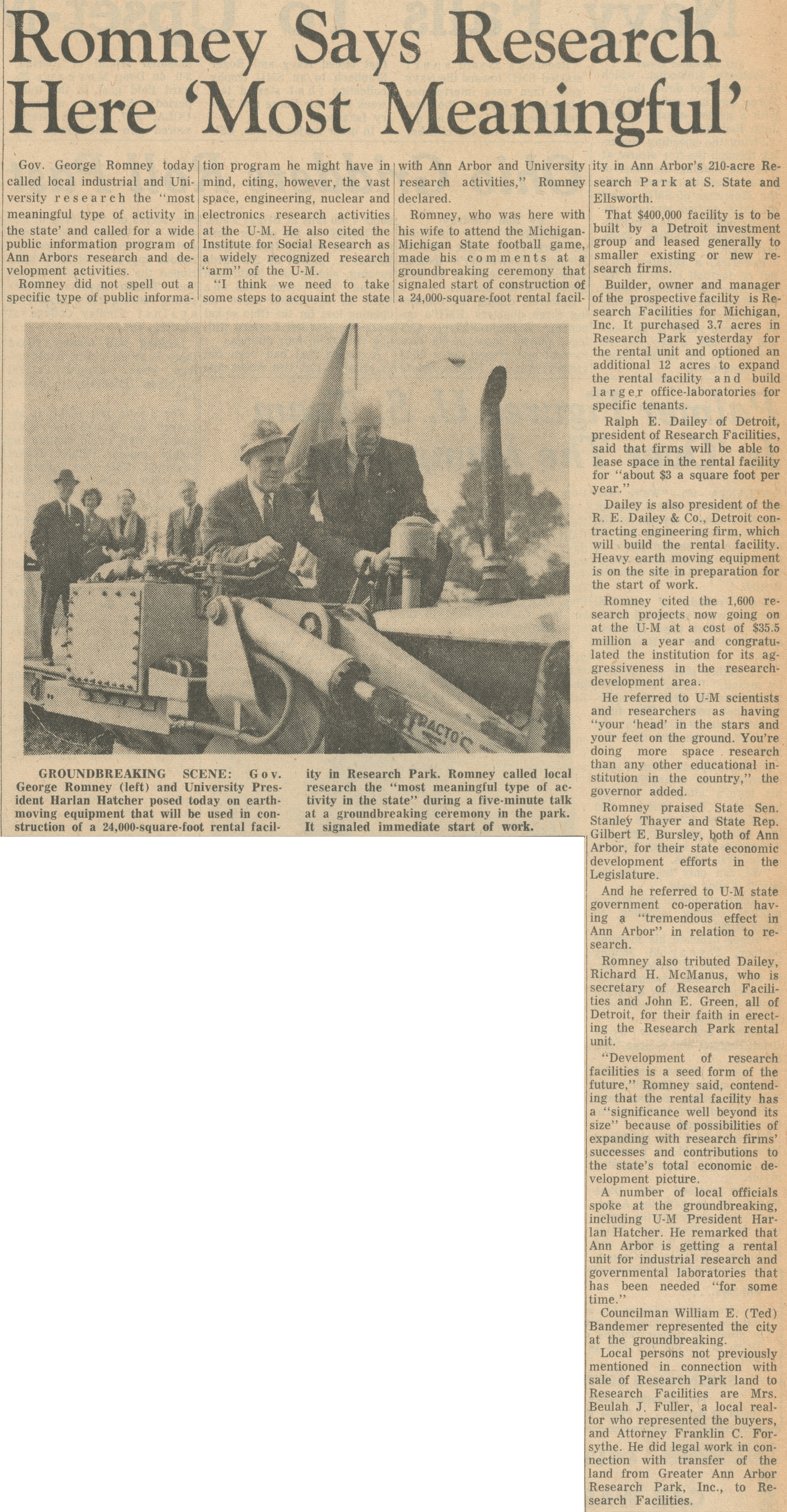 ﻿Romney Says Research Here ‘Most Meaningful’<br><br>Gov. George Romney today called local industrial and University research the "most meaningful type of activity in the state’ and called for a wide public information program of Ann Arbors research and development activities.<br><br>Romney did not spell out a specific type of public informa-<br><br>tion program he might have in mind, citing, however, the vast space, engineering, nuclear and electronics research activities at the U-M. He also cited the Institute for Social Research as a widely recognized research "arm” of the U-M.<br><br>“I think we need to take some steps to acquaint the state<br><br>with Ann Arbor and University research activities,” Romney declared.<br><br>Romney, who was here with his wife to attend the Michigan-Michigan State football game, made his comments at a groundbreaking ceremony that signaled start of construction of a 24,000-square-foot rental facil-<br><br>GROUNDBREAKING SCENE: Gov<br><br>[ George Romney (left) and University Pres I ident Ilarlan Hatcher posed today on earth i moving equipment that will be used in con I struction of a 24,000-square-foot rental facil<br><br>ity in Research Park. Romney called local research the "most meaningful type of activity in the state” during a five-minute talk at a groundbreaking ceremony in the park. It signaled immediate start of work.<br><br>ity in Ann Arbor's 210-acre Research Park at S. State and Ellsworth.<br><br>That $400,000 facility is to be built by a Detroit investment group and leased generally to smaller existing or new research firms.<br><br>Builder, owner and manager of the prospective facility is Research Facilities for Michigan, Inc. It purchased 3.7 acres in Research Park yesterday for the rental unit and optioned an additional 12 acres to expand the rental facility and build larger office-laboratories for specific tenants.<br><br>Ralph E. Dailey of Detroit, president of Research Facilities, said that firms will be able to lease space in the rental facility for “about $3 a square foot per year.”<br><br>Dailey is also president of the R. E. Dailey & Co., Detroit contracting engineering firm, which will build the rental facility. Heavy earth moving equipment is on the site in preparation for the start of work.<br><br>Romney cited the 1,600 research projects now going on at the U-M at a cost of $35.5 million a year and congratulated the institution for its aggressiveness in the research-development area.<br><br>He referred to U-M scientists and researchers as having “your ‘head’ in the stars and your feet on the ground. You’re doing more space . research than any other educational institution in the country,” the governor added.<br><br>Romney praised State Sen. Stanley Thayer and State Rep. .Gilbert E. Bursley, both of Ann Arbor, for their state economic development efforts in the Legislature.<br><br>And he referred to U-M state government co-operation having a "tremendous effect in jAnn Arbor” in relation to research.<br><br>I Romney also tributed Dailey, Richard H. McManus, who is secretary of Research Facilities and John E, Green, all of Detroit, for their faith in erecting the Research Park rental unit.<br><br>“Development of research facilities is a seed form of the future,” Romney said, contending that the rental facility has a “significance well beyond its size” because of possibilities of expanding with research firms’ successes and contributions to the state’s total economic development picture.<br><br>A number of local officials spoke at the groundbreaking, including U-M President Harlan Hatcher. He remarked that Ann Arbor is getting a rental unit for industrial research and governmental laboratories that has been needed “for some time.”<br><br>Councilman William E. (Ted) Bandemer represented the city at the groundbreaking.<br><br>Local persons not previously mentioned in connection with sale of Research Park land to Research Facilities are Mrs. Beulah J. Fuller, a local realtor who represented the buyers, and Attorney Franklin C. Forsythe. He did legal work in connection with transfer of the land from Greater Ann Arbor Research Park, Inc., to Research Facilities.