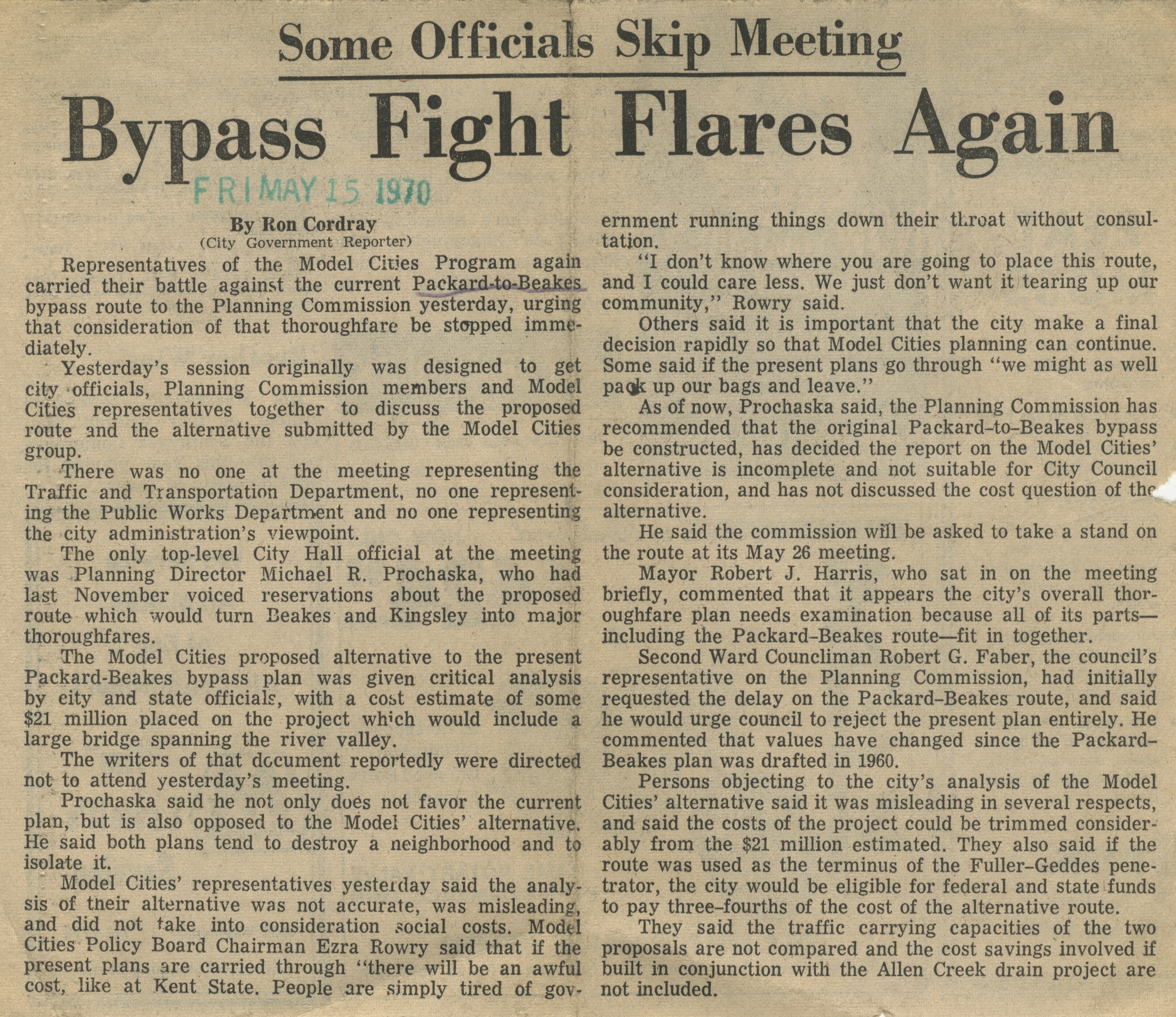 Representatives of the Model Cities Program again carried their battle against the current Packard-to-Beak.es bypass route to the Planning Commission yesterday, urging that consideration of that thoroughfare be stopped immediately.

Yesterday’s session originally was designed to get city officials, Planning Commission members and Model Cities representatives together to discuss the proposed route and the alternative submitted by the Model Cities group.

The only top-level City Hall official at the meeting was Planning Director Michael R. Prochaska, who had last November voiced reservations about the proposed route which would turn Beakes and Kingsley into major thoroughfares.

The Model Cities proposed alternative to the present Packard-Beakes bypass plan was given critical analysis by city and state officials, with a cost estimate of some $21 million placed on the project which would include a large bridge spanning the river valley.

The writers of that document reportedly were directed not to attend yesterday’s meeting.

Prochaska said he not only does not favor the current plan, but is also opposed to the Model Cities’ alternative. He said both plans tend to destroy a neighborhood and to isolate it.

Model Cities’ representatives yesterday said the analysis of their alternative was not accurate, was misleading, and did not take into consideration social costs. Model Cities Policy Board Chairman Ezra Rowry said that if the present plans are carried through “there will be an awful cost, like at Kent State. People are simply tired of government running things down their throat without consultation.

“I don’t know where you are going to place this route, and I could care less. We just don’t want it tearing up our community,” Rowry said.

Others said it is important that the city make a final decision rapidly so that Model Cities planning can continue. Some said if the present plans go through “we might as well pack up our bags and leave.”

As of now, Prochaska said, the Planning Commission has recommended that the original Packard-to-Beakes bypass be constructed, has decided the report on the Model Cities’ alternative is incomplete and not suitable for City Council consideration, and has not discussed the cost question of the alternative.

He said the commission will be asked to take a stand on the route at its May 26 meeting.

Mayor Robert J. Harris, who sat in on the meeting briefly, commented that it appears the city’s overall thoroughfare plan needs examination because all of its parts— including the Packard-Beakes route—fit in together.

Second Ward Councilman Robert G. Faber, the council’s representative on the Planning Commission, had initially requested the delay on the Packard-Beakes route, and said he would urge council to reject the present plan entirely. He commented that values have changed since the Packard-Beakes plan was drafted in 1960.

Persons objecting to the city’s analysis of the Model Cities’ alternative said it was misleading in several respects, and said the costs of the project could be trimmed considerably from the $21 million estimated. They also said if the route was used as the terminus of the Fuller-Geddes penetrator, the city would be eligible for federal and state funds to pay three-fourths of the cost of the alternative route.

They said the traffic carrying capacities of the two proposals are not compared and the cost savings involved if built in conjunction with the Allen Creek drain project are not included.