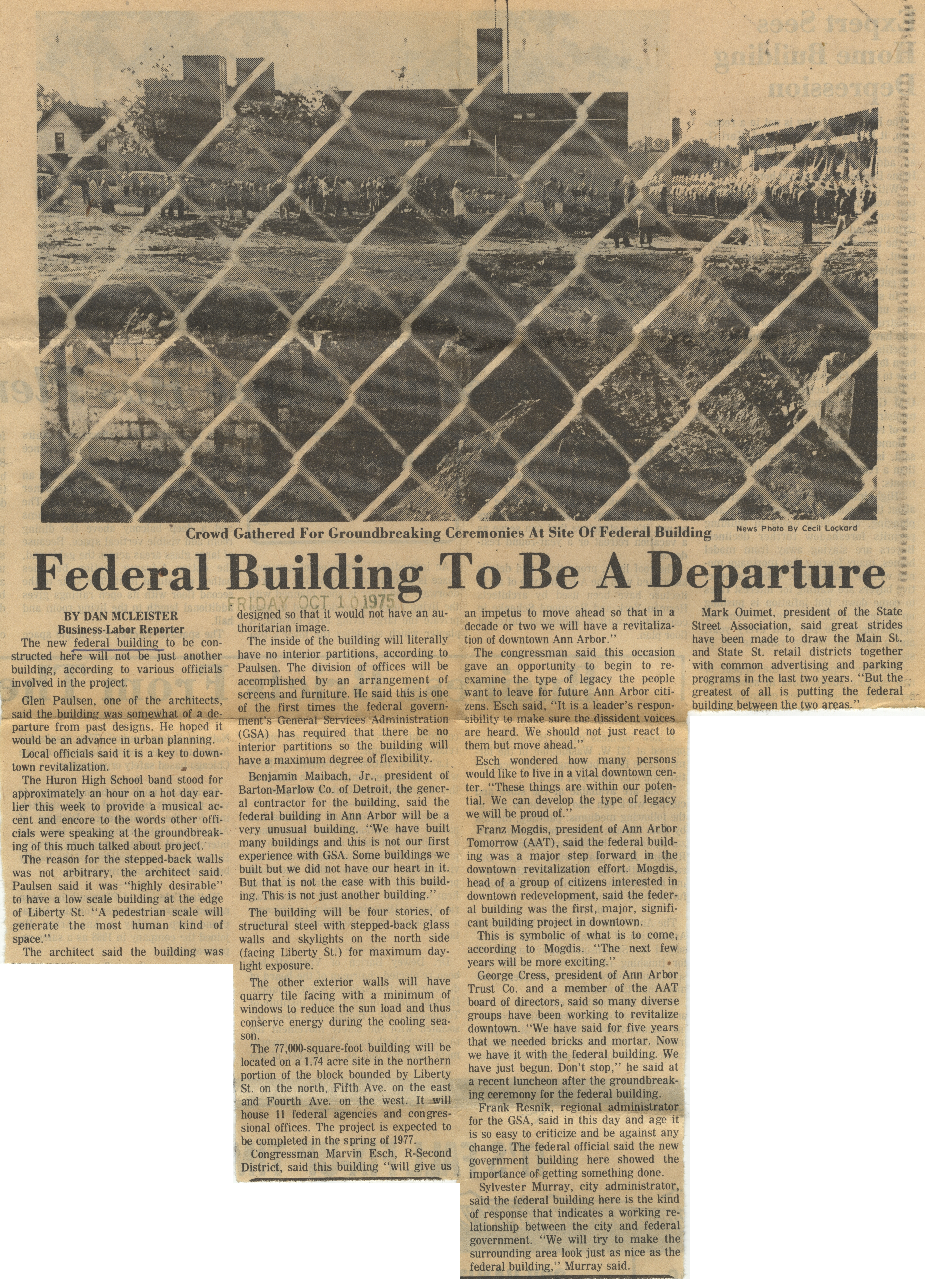 The new feder ing to be con-
strn "re will not beTlust another
buikiiii iccording to various officials
.involved in the project.

Glen Paulsen, one of the architects,
said the building was somewhat of a de-
parture from past designs. He hoped it
would be an advance in urban planning.

Local officials said it is a key to down-
town revitalization.

The Huron High School band stood for
approximately an hour on a hot day ear-
lier this week to provide a musical ac-
cent and encore to the words other offi-
cials were speaking at the groundbreak-
ing '' "" much talked about project.

T ui for the stepped-back walls
was not arbitrary, the architect said.
Paulsen said it was "highly desirable"
to have a low scale building at the edge
of Liberty St. "A pedestrian scale will
generate the most human kind of
space."

The architect said the building was

designed so that it would not have an au-
thoritarian image.

The inside of the building will literally
have no interior partitions, according to
Paulsen. The division of offices will be
accomplished by an arrangement of
screens and furniture. He said this is one
of the first times the federal govern-
ment's General Siervices Administration
(GSA) has required that there be no
interior partitions so the building will
have a maximum degree of flexibility.

Benjamin Maibach, Jr., president of
Barton-Marlow Co. of Detroit, the gener-
al contractor for the building, said the
federal building in Ann Arbor will be a
very unusual building. "We have built
many buildings and this is not our first
experience with GSA. Some buildings we
built but we did not have our heart in it.
But that is not the case with this build-
ing. This is not just another building."

The building will be four stories, of
structural steel with stepped-back glass
walls and skylights on the north side
(facing Liberty St.) for maximum day-
light exposure.

The other exterior walls will have
quarry tile facing with a minimum of
windows to reduce the sun load and thus
conserve energy during the cooling sea-
son.

The 77,000-square-foot building will be
located on a 1.74 acre site in the northern
portion of the block bounded by Liberty
St. on the north. Fifth Ave. on the east
and Fourth Ave. on the west. It will
hi-in., 'i f.i^ral agencies and congres-
si The project is expected to
be completed in the spring of 1977.

Congressman Marvin Esch, R-Second
District, said this building "will give us

an impetus to move ahead so that in a
decade or two we will have a revitaliza-
tion of downtown Ann Arbor."

The congressman said this occasion
gave an opportunity to begin to re-
examine the type of legacy the people
want to leave for future Ann Arbor citi-
zens. Esch said, "It is a leader's respon-
sibility to make sure the dissident voices
are heard. We should not just react to
them but move ahead."

Esch wondered how many persons
would'''-•• '"i live in a vital downtown cen-
ter. things are within our poten-
tial. We can develop the type of legacy
we will be proud of."

This is symbolic of what is ;

according to Mogdis. "The next few
years will be more exciting."

George Cress, president of Ann Arbor
Trust Co. and a member of the AAT
board of directors, said so many diverse
groups have been working to revitalize
downtown. "We have said for five years
that we needed bricks and mortar. Now
we have it with the federal building. We
have just begun. Don't stop," he said at
a recent luncheon after the groundbreak-
ing ceremony for the federal building

Frank Resnik, regional administrator
for the GSA, said in this day and age it
is so easy to criticize and be against any
change. The federal official said the new
government building here showed the
• importance of getting something done.

Sylvester Murray, city administrator,
said the federal building here is the kind
of response that indicates a working re-
; lationship between the city and federal
I government. "We will try to make the
1 surrounding area look just as nice as the
, federal building," Murray said.

Mark Ouimet, president of the State
Street Association, said great strides
have been made to draw the Main St.
and State St. retail districts together
with common advertising and parking
programs in the last two years. "But the
greatest of all is putting the federal
building bet' " two areas."